Carl looks at his watch. He says he must get out. He looks around and sees the stone which allows him to open the secret door. He rushes out of the mausoleum. Outside, he swears that they'll get cousin Barnabas tonight! 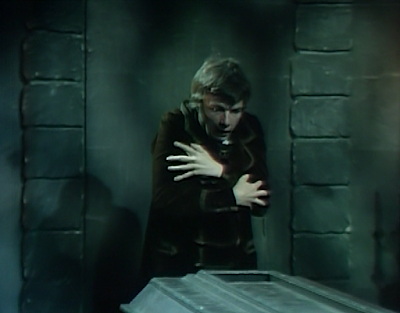 Quentin sits in the drawing room, listening to his theme. He ignores knocking at the front door. Trask enters and says he'd be better off playing hymns. Trask says he has come to see Judith. Quentin says he has a meeting at dusk, and leaves Trask with his music playing, 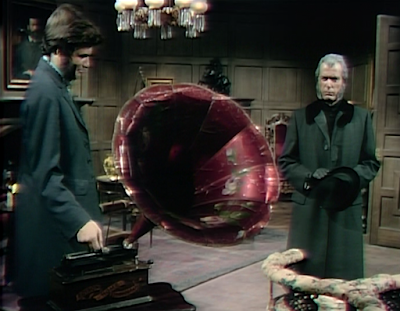 Outside of Collinwood, Carl realizes that he had to finish Barnabas. He enters and finds Trask. He asks where Quentin is, and Trask tells him he left. Carl asks if he can trust Trask. Trask says that trust is his business. Carl tells him that Barnabas is the vampire, and he can prove it. Trask tells him to prove it, and Carl invites him to come with him to the coffin. Carl says they must hurry, as it will be dangerous once it's dark. Trask says he has the ultimate weapon to keep them safe, and holds up his cross. Barnabas rises from his coffin. He finds the secret door open. He hears someone enter the mausoleum. It's Quentin. Barnabas bares his fangs, and Quentin says he knows - and he understands why he's his only hope. Barnabas is surprised he's not afraid. Quentin asks if he killed Carl. He says Carl found out about Barnabas in a dream. Barnabas asks how long ago Carl escaped. Barnabas tells Quentin to go to Collinwood to find Carl. He says if it's too late, Quentin should meet him at the old house. 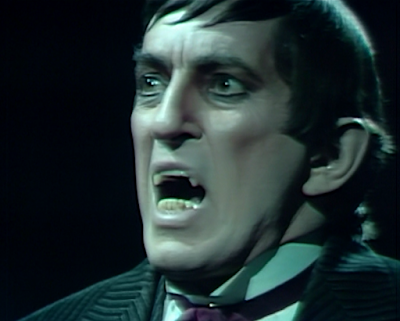 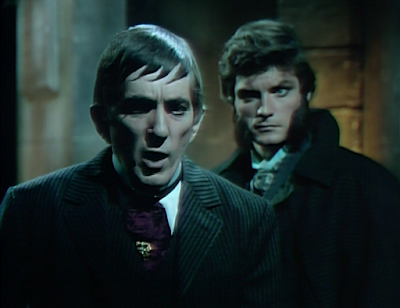 Carl doesn't think Trask is taking him seriously. They arrive at the mausoleum. Carl hears something, They enter, and Carl mentions the secret door. Trask says he's known about it for months, since it contained Rachel. Carl opens it, and says he won't find Rachel in there now. Trask enters, and Carl asks if he believes him now. Carl enters and sees the room is empty. Trask says that Judith has said he is particularly high strung. Trask accuses Carl of trying to make him look foolish. Carl says he has to believe him. He says that Quentin was there, too. Trask says they can ask him, but even Carl realizes that he might lie about it. Carl tells Trask that he'll find a way to prove it, and runs off. Trask thinks that Carl actually needs his help. 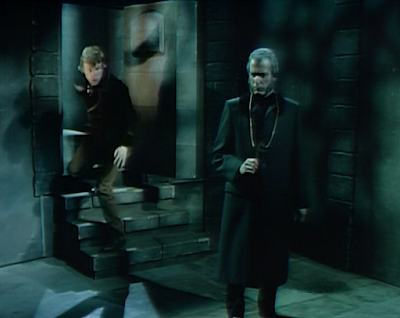 Carl returns to Collinwood and tries to phone for help. A bat flaps outside the drawing room window. The shutters suddenly swing open. Carl asks who's there, and the drawing room doors slam shut. He runs to the windows, which are now closed. 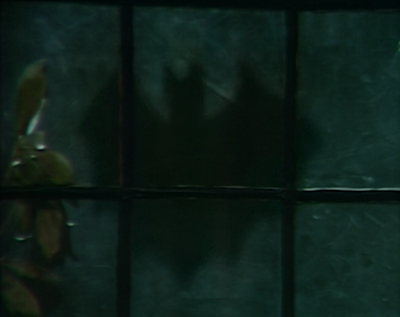 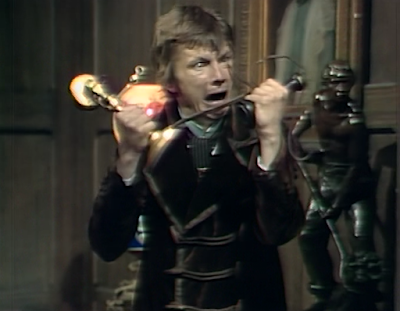 Barnabas' voice asks Carl who he told. Carl says he'll do whatever he wants. He promises not to tell anyone. Barnabas appears in the room, and says that Carl will tell. He approaches him and demands to know who Carl told. He grabs his throat. 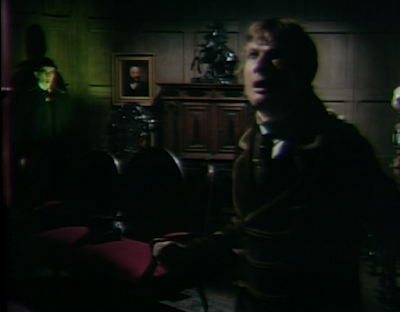 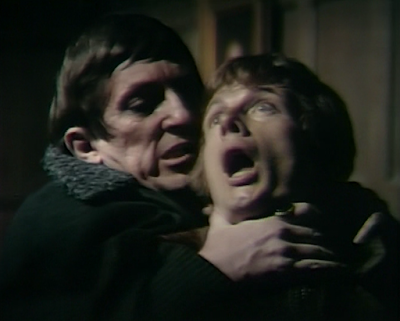 Trask enters, looking for Carl. Quentin says he's out. Trask offers to wait for him in the drawing room. Quentin tries to direct him to the study. Trask refuses, and lets himself into the drawing room. It appears to be empty. Trask tells Quentin that Carl is in a deplorable state, and he anticipates another tragedy. From behind the curtain, Carl falls down, dead. Trask accuses Quentin of knowing about this. Quentin denies it, and after checking Carl's body, says that he's dead. 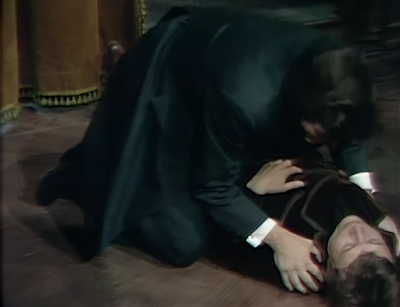 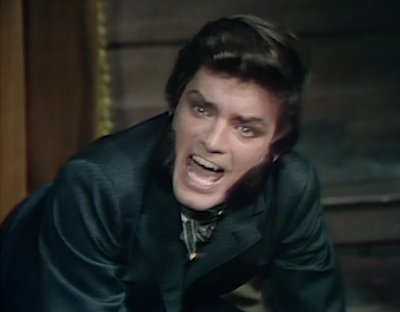 Barnabas is in the old house when Trask arrives. He points out that the Reverand is out late, and Trask says that as long as it is still dark, it's not too late for Barnabas. Trask accuses Barnabas of Carl's murder. He says he knows he is a foul and evil supernatural creature. Trask pulls out his cross and tells him not to come any closer. Barnabas turns away, saying that Trask has no facts. 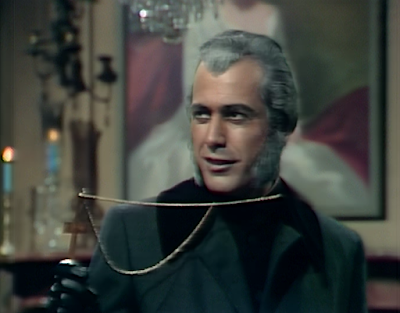 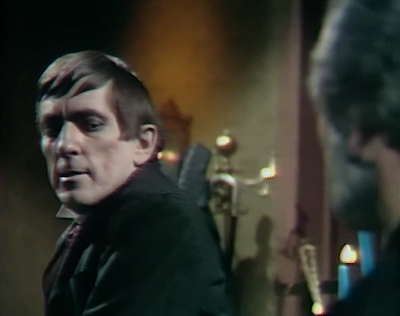 Trask says that Carl told him what he is, after seeing him in his coffin. Trask says he's there to get proof. Trask tells him that if he's innocent, he has nothing to fear, not even the dawn of the new day. He challenges Barnabas to stay up with him until the sun rises. He says that if Barnabas survives the dawn, he will believe he is innocent. 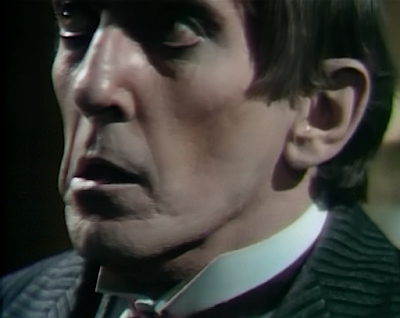 John: I guess, since he's a natural prankster, it's not completely unreasonable for Carl to have figured out how to open the secret door. Too bad for Carl that cousin Barnabas already had plans to move the coffin that night.

Christine: He did say it was like one of his Chinese puzzles. In yesterday's episode, Carl was able to find and move the step that hides the lever to open the door from the inside, but today he nearly stumbles over the step already opened up. I assume it was deliberately left open because it seemed a stretch for Carl to have figured out that he needed to move that particular step to get out, but then it doesn't make sense that he didn't notice it right away. Also, why would it have been left open in the first place?


John: On the bright side, Carl should be reunited with his Pansy now! I honestly wasn't expecting Carl to be dispatched so readily. And for what it's worth, I can't imagine Edward or Judith will be too broken up over this latest turn of events, whenever they show back up and find out about them...

Christine: I think you are wrong about Edward and Judith. Carl may have been an annoyance, but he was a gentle soul who never harmed anyone. Barnabas is so cruel. He could have put the bite on Carl to keep him from talking instead of killing him. And Quentin showed just how dastardly he is by allowing him to do it, and then excusing him for it. Poor Carl.

John: Since Barnabas reacted to Trask's cross, I'm curious why the Reverend didn't press the issue, instead, setting up a showdown at dawn. I'm guessing Barnabas' new ally, Quentin, will save the day. That said, weren't we due another full moon this night?

Christine: Don't count Angelique out. She may be the one to ride to the rescue, despite claiming to Magda she no longer cares about him. By the way, it's funny how Barnabas never reacts to the gravestone cross situated right outside the mausoleum. It's also amusing that Trask wears a cross that hangs down to his crotch. 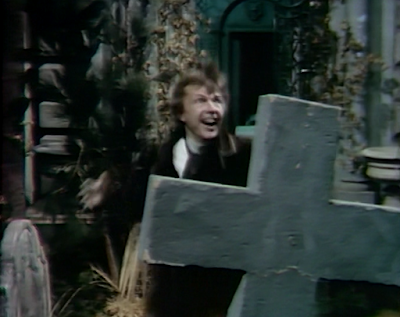 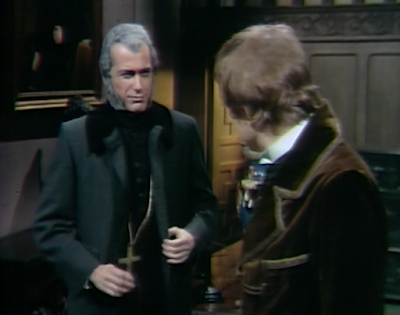 Barnabas goes back in time to save David and ends up killing Carl, without apparent qualms about it, just as Christine says. Evidently a NINETEENTH Century Collins is "expendable."

For all he knows, he may have just killed off the entire Collins family. If Carl was responsible for saving Jamison in a future event and is now not around to do it, then he can say goodbye to Liz, Roger, Carolyn and David. Way to go, Barnabas!

Or, he may have SAVED the future of the family. Jamison may have accidentally been killed if one of Carl's practical jokes went horribly wrong!

Barnabas also inadvertently saves Nora from death by fire at the hands of Laura (little girl who died in a fire, said Liz once to David), which unfortunately never led to a late 1960's Nora appearance at the ripe old age of 80+.