Rachel enters the basement of the abandoned house, looking for Tim. She finds the coffin, and wonders why it's there. She sees a lit candle, and is sure Tim had been there. She decides to wait for him. She opens the coffin and finds it empty. As she waits, someone enters. She calls to Tim, but is surprised to see that it's Dirk. He says that Tim can't see her now. Rachel asks what happened. He says she shouldn't have come. He says he's not going to hurt her. She tells him to stay away, and he bites her. 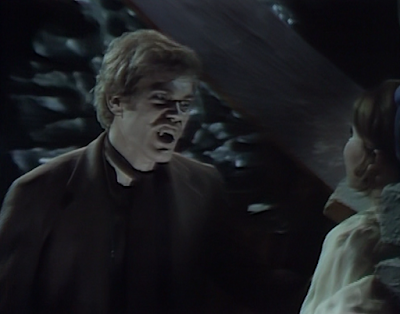 Barnabas arrives at the main house to see Edward. Edward asks where Barnabas has been. He says he's been searching for Dirk. Edward asks if Barnabas thinks he's dead. He says he is convinced that a vampire or some supernatural creature is running loose around the estate. He says a vampire's attack will result in a radical personality change in the victim, turning them into a walking dead person. He opens the door to the drawing room to show him Judith, with two marks on her neck. She says hello to Barnabas. Barnabas asks Edward if he found what he wants to know. 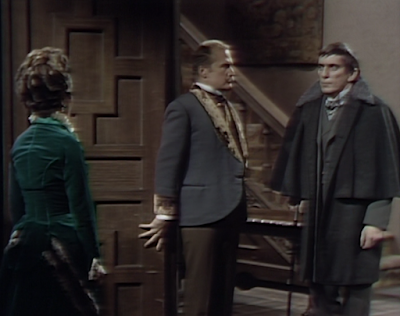 Edward closes the door. Barnabas asks if Edward no longer suspects him of being a vampire, and he apologizes. He says Judith went to see Barnabas at the old house, and Trask brought her back to the main house in this condition. Barnabas says the creature must be found and destroyed. He says that Judith may be able to help them, and offers to help take her to her room. 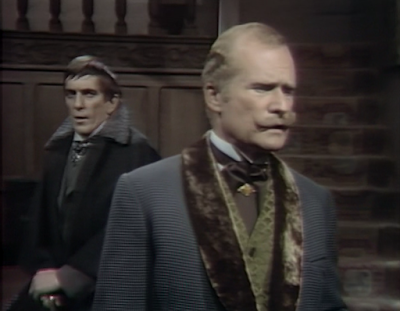 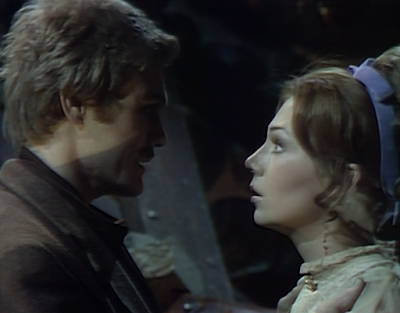 Judith is asleep in bed as Barnabas and Edward stand over her. Barnabas tells Edward to watch over her, in case the vampire doesn't lure her away. He says he won't be able to stop her, but she may lead him to Dirk's coffin. In the meantime, Barnabas leaves to continue the search for Dirk. 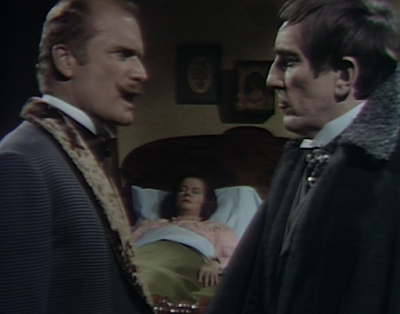 Edward watches over Judtih. He hears a door, and goes to investigate. He calls for whoever it was to answer him, but no one does. He hears more noises, goes into the hall and demands an answer. He goes downstairs and finds the front doors open. He closes them. He checks the drawing room, and also finds it empty. He goes back upstairs, and is grabbed from behind by Dirk, who knocks him out. The front doors shut on their own. 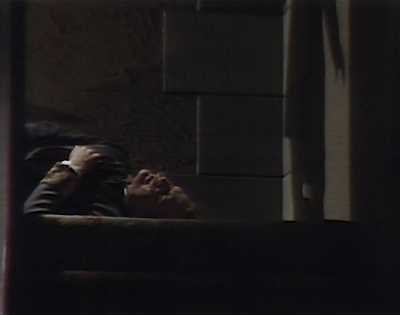 Dirk stands over Judith. He says there's something she must do. He says she can't tell anyone that she's seen him. She says that she will leave the house at dawn, and gives her a gun to use if necessary. 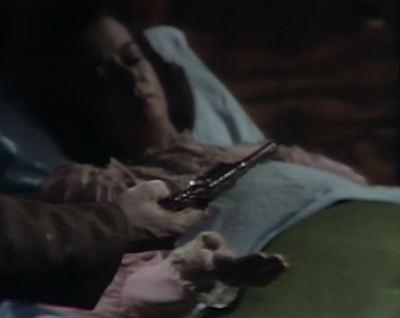 Edward comes to at the top of the stairs. He goes to check on Judith.

Dirk asks Judith if she's ready to do as he asked, and she says yes. He disappears as Edward comes running. She hides the gun under her pillow. He asks her who was in the room, and she denies anyone was there. He pleads with her to tell him who was there, but she says it was only the two of them. 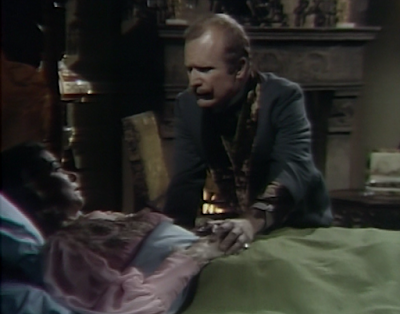 Barnabas loads a gun with two silver bullets, and places it on the mantle. Dirk appears behind him. He says he wants to make Barnabas a proposition. Barnabas says he's not interested, until Dirk explains he has Rachel as a prisoner. Dirk tells him he wants Barnabas to get Laura back. Barnabas says he can't. Dirk says he'll find a way if he ever wants to see Rachel again. Barnabas assures him that Laura is dead. Dirk gives him until dawn, and then Rachel will die. Barnabas grabs for the gun, and Dirk says that by the time he finds Rachel, she'll be dead. 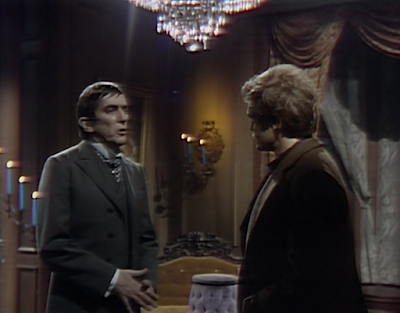 Edward enters Judith's room and tells her it will be light in another hour. He is shocked to see her bed is empty.

Dirk returns to the abandoned basement. He tells Rachel he's waiting for Laura to come back. Rachel points out that she's dead, and Dirk says there are people with powers over death. Dirk is upset thinking about Laura. He hears a rooster, and realizes that Barnabas has failed. He says he warned him to be there by dawn, and he'll be sorry. 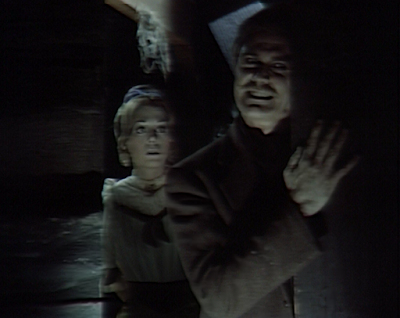 Dirk opens his coffin. He gets inside and closes the lid. Rachel hears someone enter the basement, and is surprised to see Judith. She apologizes to Rachel, and points her gun at her. 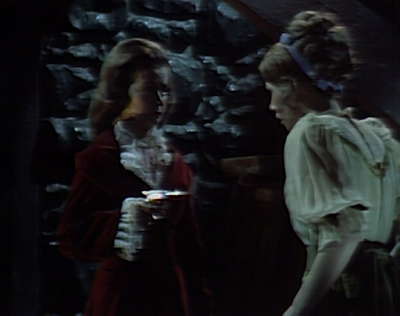 Christine: You've got to hand it to him. He's got at least two servants working for him, which gives him a significant advantage over Barnabas. It's questionable whether or not Tim is also a servant or if he did him in, as we haven't seen him since Dirk showed him his fangs.

John: I wonder if Edward read up on vampires in the books in the drawing room? He's become quite the expert in no time at all. Fortunately, it hasn't allowed him to figure out that his cousin is also a vampire!

Christine: Surely he must have noticed that Barnabas is never out and about during the day.

John: If Dirk only gives Barnabas a couple of hours to do the impossible, why not just shoot the bastard? If anything, with Dirk dead, she should be free of his spell. Wouldn't you think Barnabas would know this?

Christine: I was thinking the same thing, but you know the romantic vampire couldn't take a chance, believing that Dirk may have locked his sweetheart away somewhere where she might starve to death before he could find her. I was surprised that Dirk's motivation was to get Barnabas to restore Laura rather than expose him as the town vampire for the sake of revenge. Becoming a crazy vampire makes him even scarier than the unstable human he was, which was pretty frightening already. 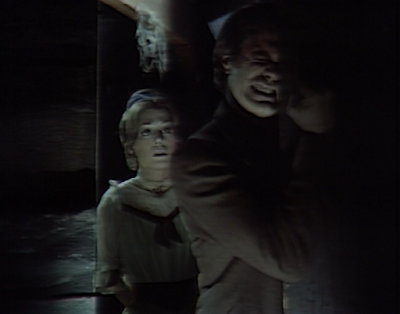 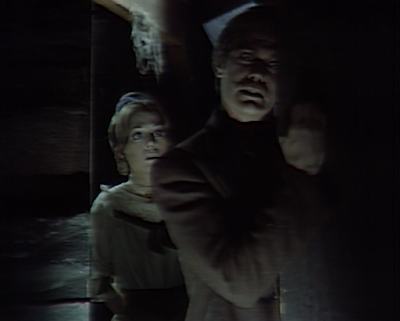