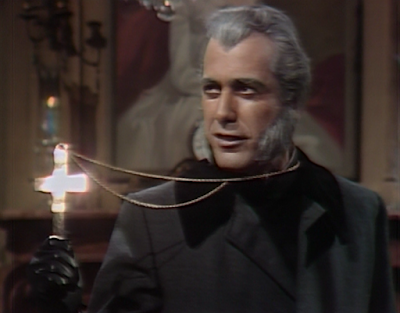 Barnabas is in the old house when Trask arrives. He points out that the Reverand is out late, and Trask says that as long as it is still dark, it's not too late for Barnabas. Trask accuses Barnabas of Carl's murder. He says he knows Barnabas is a foul and evil creature. Trask pulls out his cross and tells him not to come any closer. Barnabas turns away, saying that Trask has no facts. Trask says that Carl told him what he is, after seeing him in his coffin. Trask says he's there to get proof. 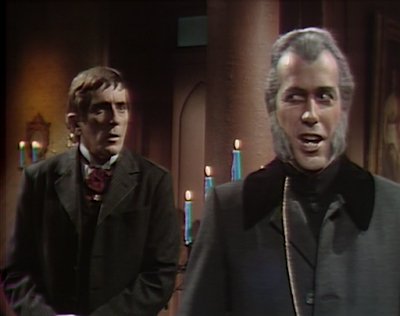 Trask tells him that if he's innocent, he has nothing to fear, not even the dawn of a new day. He challenges Barnabas to stay up with him until the sun rises. He says that if Barnabas survives the dawn, he will believe he is innocent. Barnabas tells him that they will meet again, and he will deal with him as he dealt with his ancestor before him. He disappears, and Trask shouts out that now he knows Barnabas' secret, and he will destroy him. 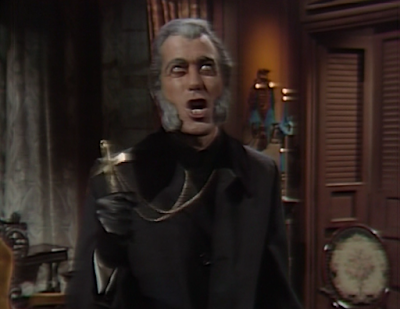 Barnabas opens his coffin, which is in the secret room off the drawing room. 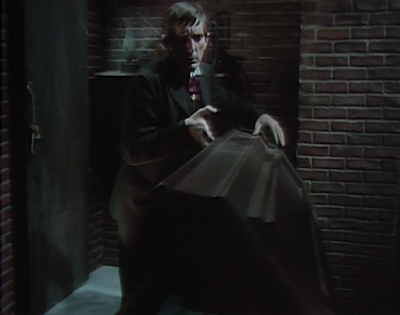 Edward calls the sheriff to let him know that his brother Carl is dead. Trask returns to Collinwood, and Edward is angry that he left after Carl's body had been discovered. Trask invites Edward into the drawing room, and tells him that the source of evil that has plagued the house is his cousin, Barnabas. He says Carl found Barnabas' secret, and he was able to tell him before Barnabas killed him. He explains that Barnabas is a vampire. Edward says that Dirk was the vampire, and Trask says that he was a diversion created by Barnabas so that he wouldn't be suspected. Trask says that he challenged Barnabas to wait for the dawn with him, and he vanished before his very eyes, in order to save himself. Edward says he believes him. Trask says that they must find Barnabas and destroy him. He suspects his coffin is at the old house, but Edward says that if Trask knows about him, there's no way he would hide in the old house. Edward says that they will find Barnabas without involving the police, to ensure that no one else finds out about this family secret. 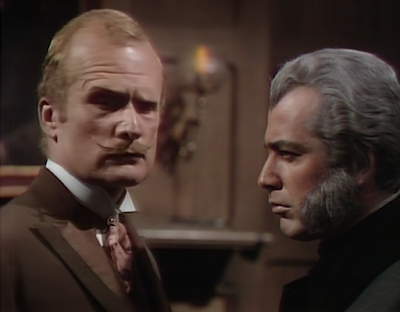 Magda comes up from the basement to hear a knock at the door. Edward and Trask come in, demanding to know where Barnabas is. She says he's away for the day, and Edward accuses her of lying. Trask grabs her and says that she's been helping him, and she will be punished if she doesn't cooperate. He asks her where Barnabas keeps his coffin. Edward says they will search the entire house. She tells them to go ahead and search. Trask offers her one more chance, and slaps her. He tells her God will smite her for the sins she has committed. Magda tells him he has made a mistake. She warns him that she will never be far behind him. 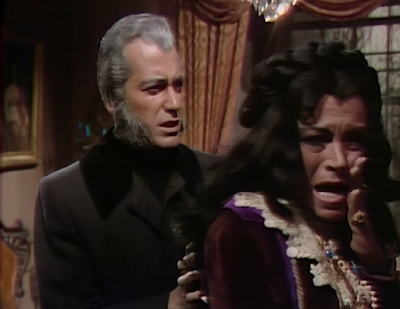 In the drawing room, Trask reviews papers. Edward comes in and confirms that he got silver bullets from Braithwaite. Edward asks if he's reviewed the plans, and Trask says there are four secret rooms or passageways in the old house, and they will begin with the one behind the drawing room. 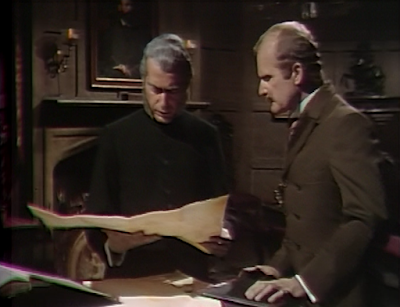 Barnabas rises from his coffin.

Magda comes downstairs in the old house to see Barnabas come out of the secret room. She says he'll have to move the coffin again. She asks where he'll go, offering to help him. He says her sympathy is disturbing. He admits that Sandor will be free if he is destroyed, and she says she'd rather see him live than have Trask get his way. There's a knock at the door. Barnabas returns to the secret room. Trask tells her to get out of the way, and that they are going to search the secret room. Edward threatens to shoot her. She steps aside. Trask approaches the bookcase, and manages to open it. Inside they find a coffin, but when Trask opens it, they find it empty. Edward says that Magda knows where Barnabas is. They return to the drawing room, but she's gone. Trask says Barnabas will have to return to his coffin before morning, and when he does, it will no longer be usable. 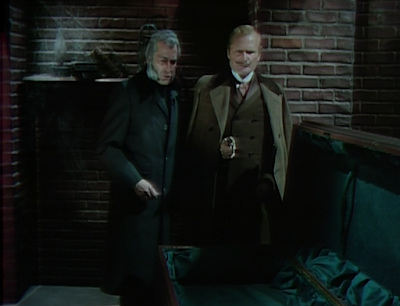 Trask asks if Edward wants him to stay with him, and Edward says he is safe with the gun. Trask says he will return by dawn.

Barnabas appears in the secret room.

Barnabas sees that the coffin is chained shut, with a cross on top of it. 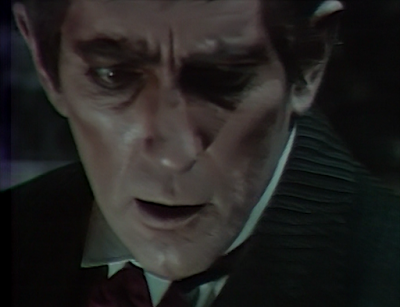 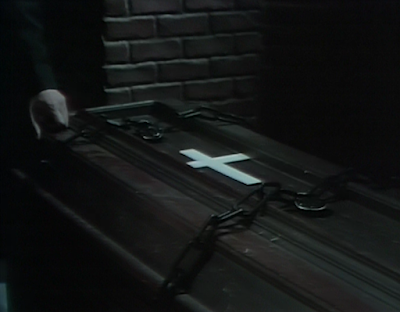 Charity is in her room when she hears a bat. She turns and sees Barnabas. He tells her that her father knows about him, and he needs her help. He tells her that she must hide him at the school and protect him. She says her father always finds out when she tries to hide something from him. Barnabas tells her to look into his eyes. She does, and cannot resist him. He tells her that he must find another coffin to rest in, and a small amount of earth from the grave in the basement of the old house. She must get that for him. He says that Edward is guarding the house, and tells her a secret entrance to the old house so that she won't be seen. 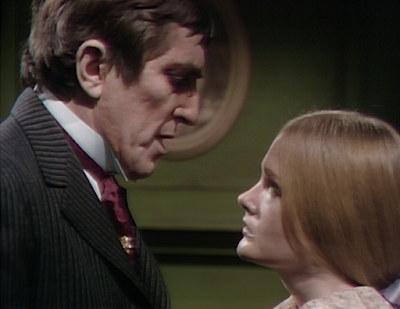 Charity collects the earth from the basement of the old house, but not before knocking over a candlestick. 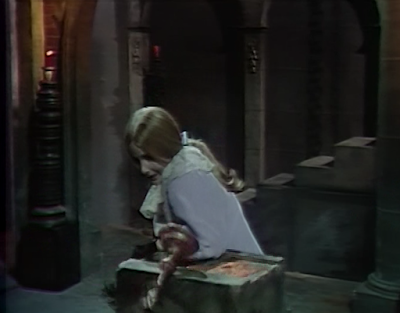 Edward hears something and calls down into the basement. He descends the stairs. Charity cowers in the shadows. He sees her shadow, and demands that she come out. She steps into the light. 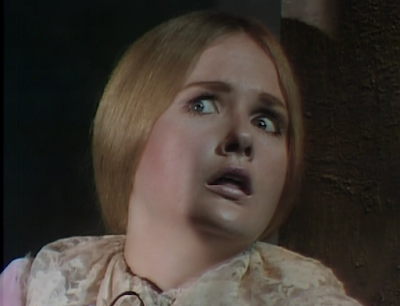 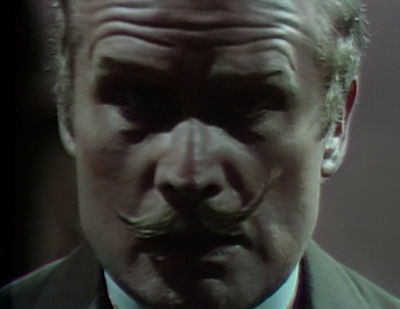 John: One of the downsides of the low grade chroma key effect is that it doesn't allow for surprises. As soon as you see the edge around Barnabas, you knew it was only time before he disappeared... 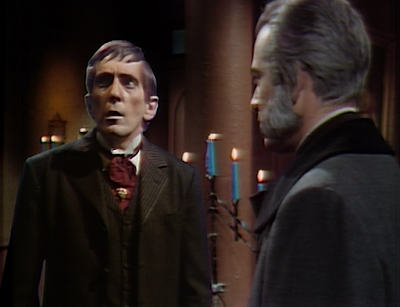 Christine: It certainly is a dead giveaway.

John: How quickly Edward became a vampire hunter! Odd that right after saying he was sure Barnabas wouldn't be hiding at the old house, he says they should go to the old house to finish things.

Christine: He must have read the Van Helsing diaries.

John: Wouldn't destroying Barnabas' coffin be easier than decopauging it? Still, shame on Barnabas for not already having back-up lodgings prepared. A forward thinking vampire wouldn't need to carry a single coffin with him everywhere he goes. Still, it will be quite interesting to see how this revelation impacts the family relationships moving forward. Will Edward have to die like Carl?

Christine: Destroying it would have been effective, but the cross decal was Trask's way of giving Barnabas the middle finger. Dirk, Angelique, and Tom Jennings were all able to provide themselves with a coffin at a moment's notice, so I would think Barnabas could do the same, though this is the first time we've heard that he needs soil from his original coffin to make for a comfy guest coffin. He should exercise caution before killing any more Collins family members or he may end the family line instead of fulfilling his mission to protect it. I expect Charity to get her name entered into Trask's Punishment Book in tomorrow's episode.