Tim returns and finds Mrs. Trask playing cards. She's startled, but he tells her he knows she plays. She explains that no one is absolutely perfect. He says he has come to apologize. She says that she just wants to relax and have her tea, and slams down the last card, revealing the Queen of Spades. He offers to refill her cup, and pours the nightshade into it. He gives it to her, and she tells him he can go. He says he wants to be sure that her tea is alright. She takes a sip. She complains that it's bitter, and he offers her more sugar. 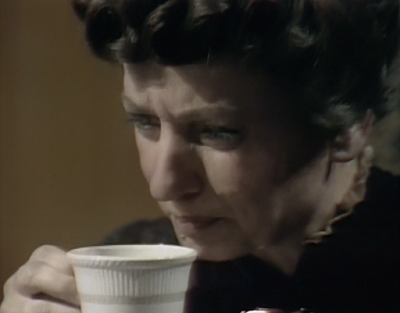 She gets up and adds more water to it. She sits back down to play cards, and Tim watches her as she drinks. She asks him what he's staring at, and tells him to go to his room. He just stands there. She gets up suddenly. He asks her what's wrong. She says she has high blood pressure. She then complains of a pain, and asks him to leave. 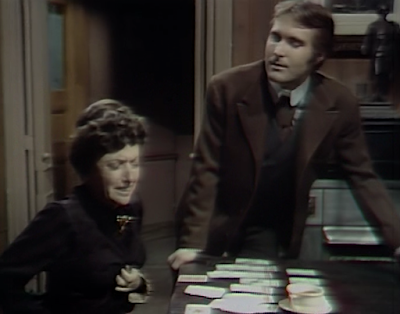 She tries to get up to call a doctor, and Tim says he'll take care of that. He picks up the phone and repeatedly asks for an operator. He tells her the line is out of order. She moans in pain. She asks him for help, and when he does nothing, she calls out to Charity. She collapses. 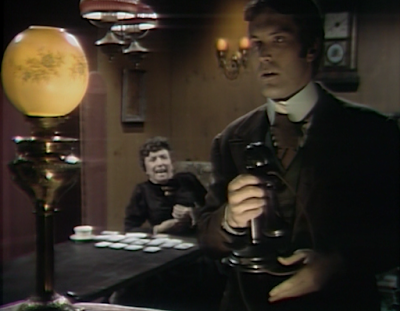 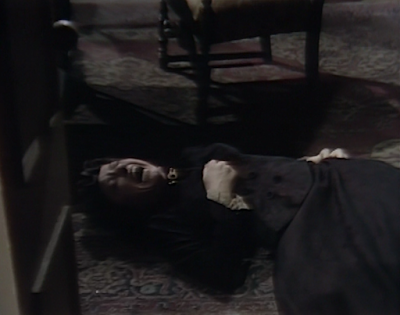 Charity sips tea. and asks Rachel how she can fail a girl for sewing, explaining her father is a very instrumental figure. She suggests they give her a D. Charity asks Rachel if she has permission to go out this evening. She then says she doesn't know what Tim told her, but she broke off the engagement. Rachel was not aware. 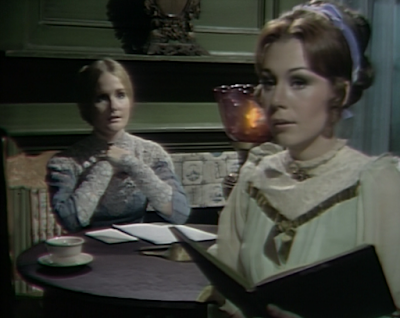 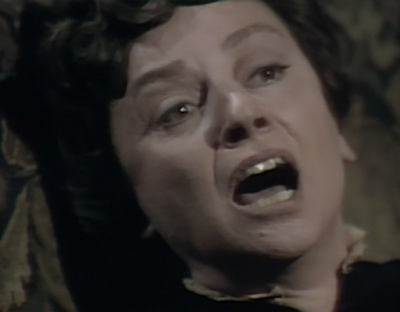 Evan enters and checks Mrs. Trask's pulse. He tells Tim that he's done well. He picks up the Queen of Spades, and tells him to look him in the eyes. He shows him the card, and says when he tears it up, he will forget all the plans they made about Mrs. Trask. 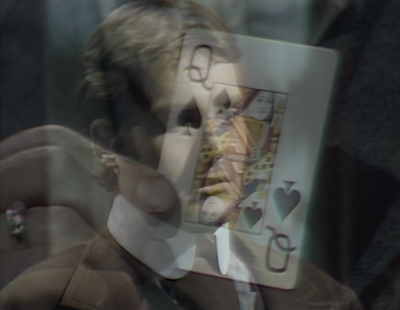 He gives Tim the card, and tells him to tear it up. Tim does as he's told. Tim comes out of his trance, and Evan yells that he did it, pointing at Mrs. Trask. Tim turns and sees her. He says she's dead. Evan says her last words were calling Tim a murderer. Evan goes to call the police, and Tim struggles with him, ultimately knocking Evan out. 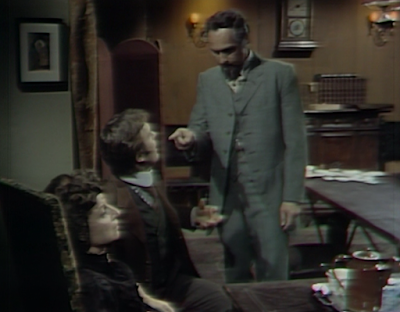 Rachel says she'll be happy to explain her grades to Charity's father. Charity leaves, and Tim goes into Rachel's room. He tells her that she's got to help him.

Charity looks at her dead mother in shock. Evan asks if Tim had a motive for killing her. Charity says she's not dead. Evan says the police will catch Tim. Charity says her father won't let her mother be dead. She asks Evan where he is. He tells her she said he was going into Collinsport. Charity asks why he's not looking for Tim. He explains that Tim is violent, and he's unarmed. Charity says she knows where Tim is—he's with Rachel. She takes a gun out of a drawer and gives it to Evan. He asks where Rachel's room is. 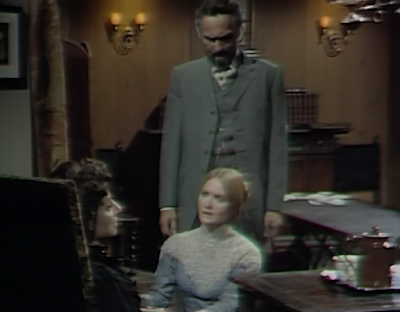 Rachel tries to understand what happened, and Tim asks if she thinks he did it. He admits that he hated Mrs. Trask, but he didn't kill her. She asks if he remembers anything. He says he went to her to apologize. Rachel suggests that Evan may have killed her, and tried to frame him. She tells him to go to the abandoned house near Collinwood where they escaped to previously. She says she'll bring him money after breakfast. He tells her to be careful, as they'll be watching her. There's a knock at the door, and it's Evan demanding that she open the door immediately. He tells her that she is an accomplice to murder if Tim is in her room. 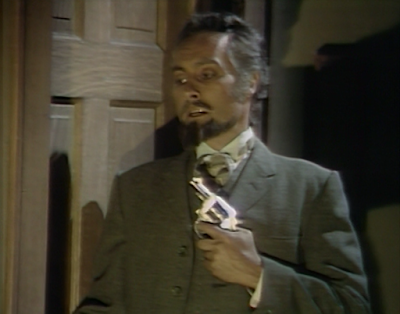 She helps Tim out the window while explaining she was just getting ready for bed. She opens the door and Evan comes in with a gun. She asks what he's doing, and he tells her that she knows. He asks if Tim went out the window, and where he's running to. He grabs her arm and demands that she tell him where Tim is. 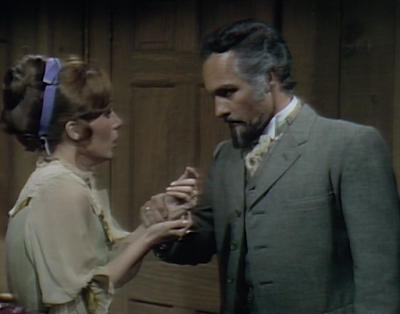 He asks if they planned the murder together, and she asks what he happens to be doing at the house. He says he came to get the translation he commissioned from Tim. She tells him to let her go. He throws her aside. He asks if he should get rougher. He leaves her, taking the key to her room. He says she won't be alone for long. 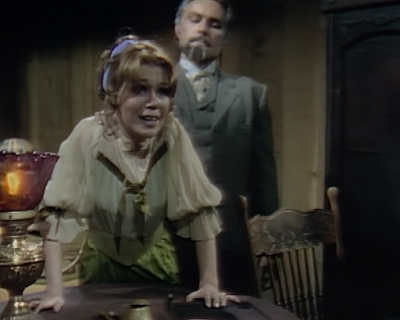 Tim sneaks into the basement of the abandoned house. He lights a candle and looks around. He sees a coffin in the basement. He opens it up and looks inside. 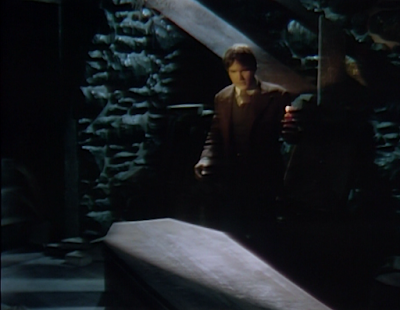 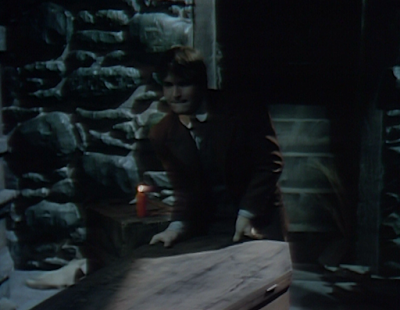 John: Mrs. Trask sure seemed like she was going to be one of those characters who was not quite dead yet. I was sure she was dead after Tim poisoned her, but then she needed to come to long enough to call him a murderer as Evan entered. And don't think we missed that blink when Charity was giving her the wide-eyed look (which reminded me of our old pal the wide-eyed skeleton). 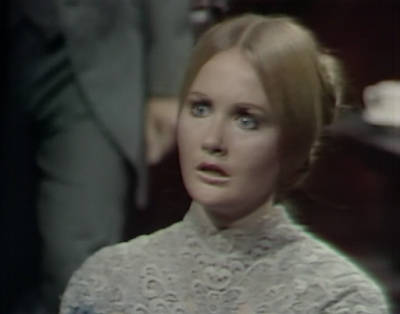 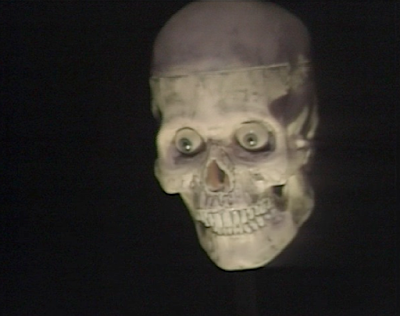 Christine: There is certainly some resemblance around the eyes.

John: Is this deja vu all over again for Tim? Trying to run away from a crime he's not even sure that he committed? You'd think he'd have difficulty getting tenure at the school under such circumstances...

Christine: It seems like Trask engineered it to happen that way. Nice little bit of swordplay between Tim and Evan. 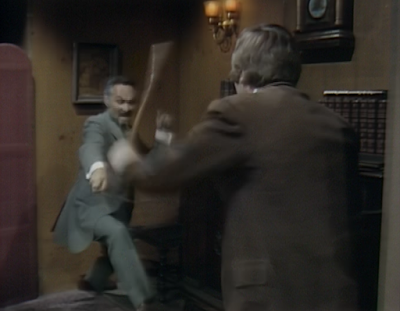 John: If it hadn't been Roger Davis' day off, I'm willing to bet that we would have seen him inside that coffin! Of course, one must wonder where he got himself a coffin in his time of need. Do you think there's a Casket Outlet in Collinsport?

Christine: When Beth and Barnabas found an open grave in Episode 771, Barnabas said that Dirk had found his secret sleeping place, so he must have procured a used coffin. I hope this means we'll meet up with Vampire Dirk tomorrow. I don't believe he can meet the standard set by Vampire Tom, but I do expect him to try in the most over the top way possible.
Posted by John Scoleri at 6:00 AM