The werewolf climbs up on a rock to rest and recuperate from his injury. 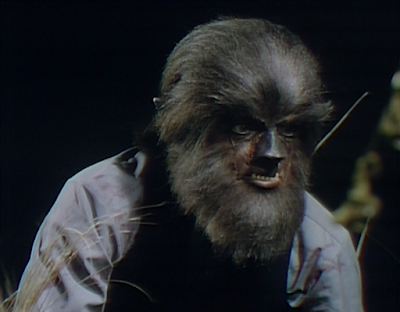 Magda approaches as she searches the woods, and the werewolf gets up and growls. She sees him, fires her gun, and he collapses to the ground. Barnabas comes running and asks what she's foolishly done. She says she's killed him so her sister's children can escape the curse. He tells her there's no escape for them, or for her. He says she deserves to die. She threatens to shoot him with the remaining silver bullets. He notices the werewolf is alive. He says if they get him to the old house and can keep him alive until dawn, he'll be fine when he reverts to Quentin. But if he dies, Quentin will die with him. 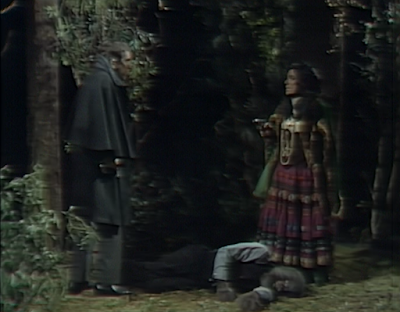 The werewolf is propped up in a chair. Magda says he may be alright, as it's almost dawn. Barnabas reminds her that it only takes a moment to die, only a moment for the whole future to be destroyed by one silver bullet in the hands of a gypsy. She says she had to help her sister's children, but she doesn't know any way out of this. He tells her she has to find a way, or someone who can. He tells her to keep the werewolf alive until dawn, and then explain why they want to help him. Before he leaves for his coffin, Barnabas demands that she give him her gun. She does, and he asks her about a missing silver bullet. She says she must have lost it. He asks if she's keeping it for an emergency, reminding her that she's pointed the gun at him once already. She asks him if it's right to pray for a cursed thing like the werewolf. He tells her that she cursed Quentin, and if his life is lost, so is hers. He heads down into the basement. 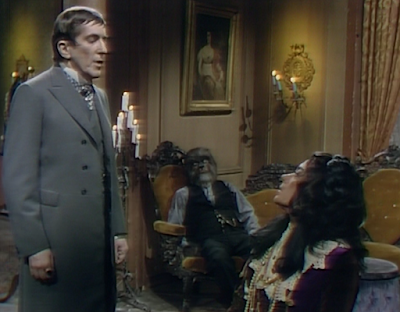 She crosses herself, saying that all hope died for her sister when she met Quentin. The werewolf wakes, and seeing Magda, approaches her. She uses her pentagram to protect herself, but it causes the werewolf to run off. 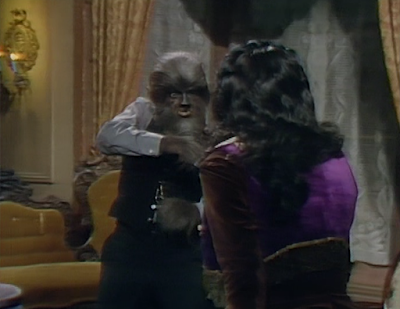 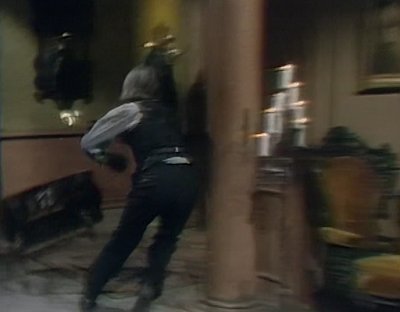 In the woods, the werewolf transforms back into Quentin. He wonders what he's done. He hears crying in the woods and calls out to whoever it is. 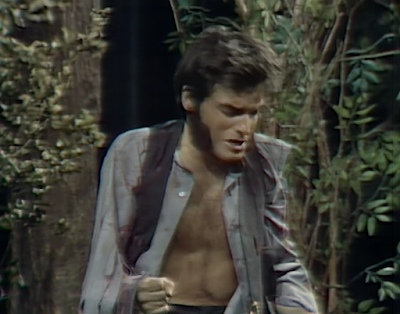 Quentin returns to Collinwod, and still hears the crying woman. He sees Dorcas in the foyer who calls him a murderer. He tries to grab her but she disappears. 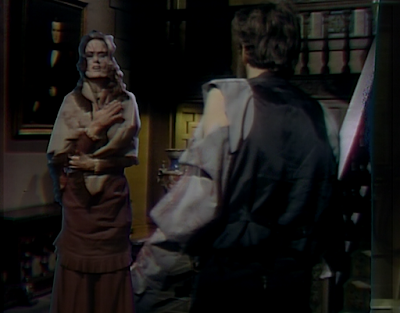 In his room, Quentin listens to his theme while he gets dressed in fresh clothes. The music stops, and Dorcas appears in his mirror, calling him a murderer. He blames the curse. He asks her to take pity, and she says the dead can not have pity. He screams for her to leave him alone. 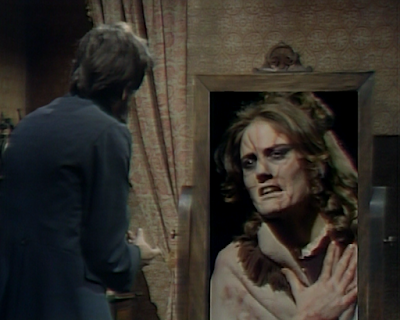 Judith rushes in and asks him what's wrong. He says the girl in the mirror is tormenting him. He asks Judith to make the woman listen to him. She explains there's no woman in the room. She asks him to describe her. He starts to describe her, and then tells her to get out of his room and leave him alone. She says he's been responding like he's an animal backed into a corner. He tells her again to leave him alone. He then hears the woman crying, and asks Judith if she hears it. When she says she doesn't, he tells her to get out and stay out. 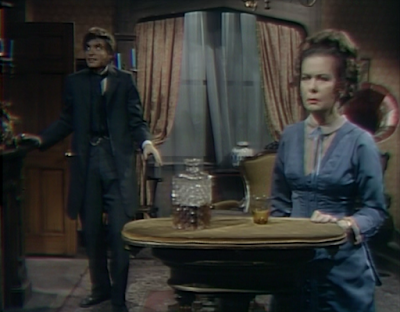 Magda waits in the old house for Barnabas to rise at dusk. He comes upstairs and asks her where Quentin is. She explains he tried to attack her, and then ran off. He asks if she went after him. She says he returned to Collinwood where he's been in his room, drinking. She says there's an old woman who lived in the forest when she was a girl who may be able to help them. Barnabas asks if she'd still be alive if she was old when Magda was a girl. She says she has a daughter. Barnabas says they must act quickly. She apologizes for what happened, and says she just wants Jenny's children to be healthy and free from the curse. He tells her to pack for her trip to find the gypsy, and he heads to Collinwood. 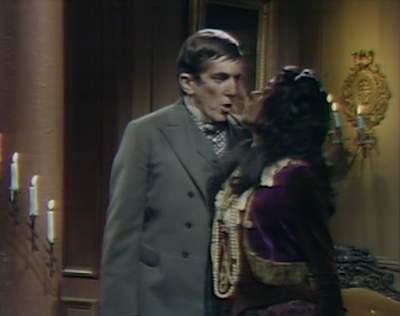 Barnabas enters Quentin's room and tells him that he need not worry, there will be no full moon tonight. Quentin denies understanding what Barnabas is referring to. Barnabas explains that he's his only chance to end the curse. Quentin asks how he found out. Barnabas says he can't explain, but he can help him. Quentin questions his motives, and tells him to leave. Barnabas explains that it's his business, and he's here to help. Quentin says he'll take care of himself, and Barnabas asks how. Quentin says he is not entirely ignorant of supernatural matters. 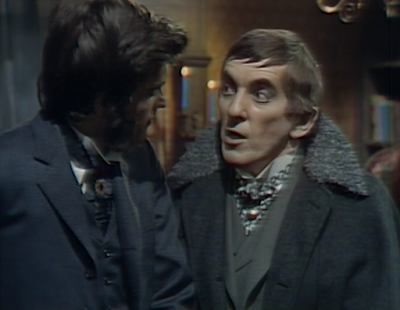 Quentin still doesn't understand Barnabas' interest. He says that the lives of people that he cares about are at stake. Quentin asks if he knows the way to end the curse. Barnabas says that he doesn't but he knows there have been cases. He says he has already taken steps in that direction. He says that Magda has gone to Boston to find a gypsy who may be able to help. Quentin asks that if Barnabas finds that he will never be free of the curse, that he shoot him through the heart. 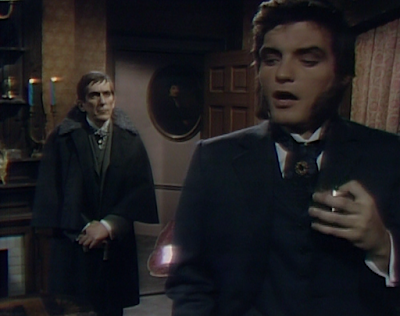 Barnabas is leaving Collinwood when Judith stops him. She asks if he can help with Jamison, with his knowledge of the family history. She says Jamison is upset about David Collins. Barnabas asks what happened to Jamison. She says he woke up from a dream, screaming, "David Collins is dead." 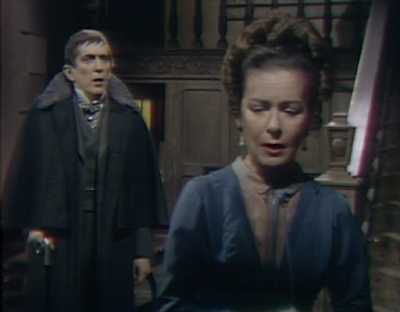 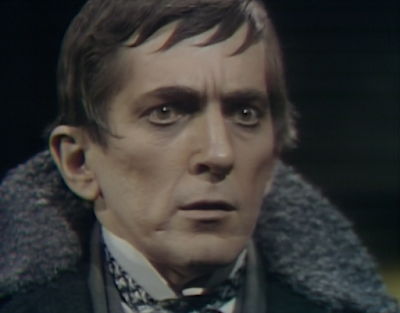 John: Wouldn't a magical silver bullet wound carry over through the transformation? All in all, it was a pretty easy werewolf day, as he got to spend a bunch of it sitting in the chair, sleeping.

Christine: The werewolf must have ripped apart his clothes after leaving the Old House so Quentin would have an excuse to show off his exposed chest after transforming back to his human form. 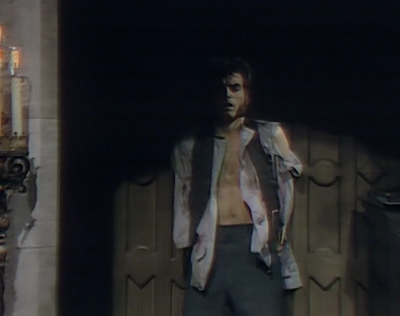 John: I'm glad we're finally starting to see a blossoming relationship between Barnabas and Quentin. I sure would like to see the vampire and werewolf working side-by-side, though I expect we might be limited to opportunities like today's sit-down in the old house, where the werewolf was unconscious.

Christine: Does Barnabas want to help Quentin because of his compassion for others who are cursed to be monsters, or because he believes it's what he needs to do to save David Collins?

John: In an interesting twist of fate, an off-screen Jamison has brought a message from the future. Of course, why and how would the current events in 1897 lead to the death of David Collins? And what else could Barnabas even do about it if it happened?

Christine: Maybe helping Quentin is not the way to save David. Or maybe Barnabas has been dilly dallying too long in 1897. I think we can rest assured that it hasn't happened yet and it's just a warning that he's got to make haste. It could also be a reminder that the 1969 family still exists, since the audience must be beginning to wonder when or if we might see them again.