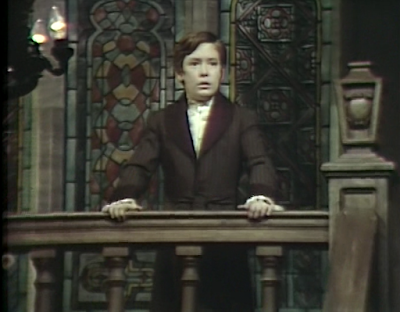 Barnabas returns to Collinwood and tells Judith he needs Jamison. He explains that Quentin's spirit is in the child, and this is the only way to save Jamison. She doesn't want to allow it. He says if he doesn't get to Quentin before he gets back to his grave, Jamison will be lost forever. He says that if she lets him take Jamison, Quentin may live again. She agrees, and asks if Barnabas or Jamison will be in danger. She also asks what special power he holds over Quentin, but Barnabas doesn't answer, and asks her to get Jamison. She goes upstairs to get him. 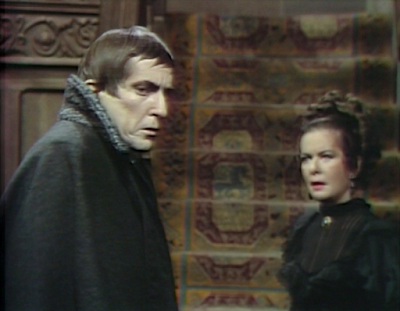 Quentin stops just short of his grave. Barnabas and Jamison find him, and Jamison tells him to get up, and not let her do this to him. Barnabas calls him Jamison, and he replies that Jamison is a child. Barnabas tells him to grab Quentin's hand, and concentrate about how much Quentin wants to live, and how he wants revenge. He tells him to use every bit of willpower to bring him back to life. He tells him to go back into his own body. Jamison starts to fade as Quentin's eyes open. He gets up and turns. Jamison laughs, and when Barnabas calls him Jamison, he says he told him not to call him that anymore. Quentin appears to be a zombie once more. 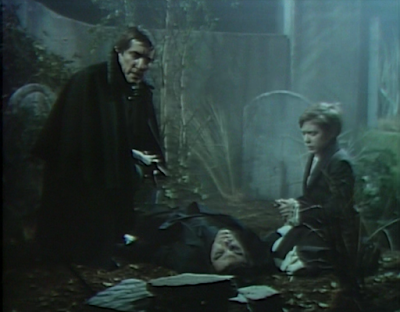 Judith wonders what's happening at Quentin's grave. She thinks about the things that have happened since Barnabas arrived. 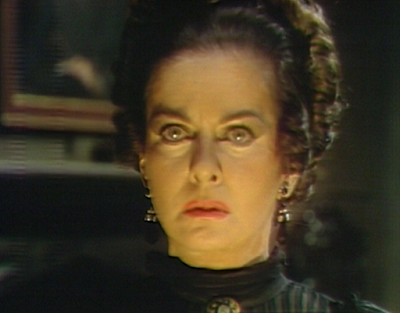 There's a knock at the door. It's Reverend Gregory Trask. He says that he's sure her brother Edward mentioned him. Trask runs a school where he was planning to send the children. He says that he is here to convince her that the school is the right place for Jamison and Nora. He starts to describe what they do for children at his school. Jamison returns and refers to Judith as his sister. 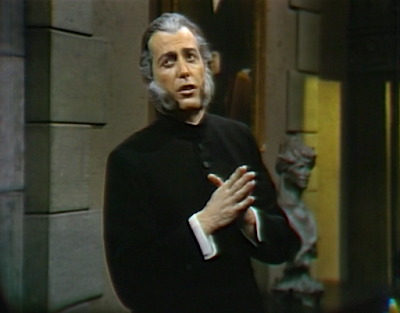 She sends him to his room. Jamison tells her they are coming, and it has failed. Trask offers his hand and Jamison greets him. Jamison starts upstairs. Judith apologizes to Trask, and says she's unable to speak to him tonight. He tries to get time with Jamison, and she refuses. He tells her he'll have to give her brother a negative report, and she lets him know that she runs the house. He asks if his trip is to be in vain. He once again asks to interview the children. She agrees, and sends him upstairs. She points out that Jamison is in a strange mood. He says if he sees a problem, he'll know how to solve it. She also tells him not to believe everything Jamison says, as he has an overactive imagination. 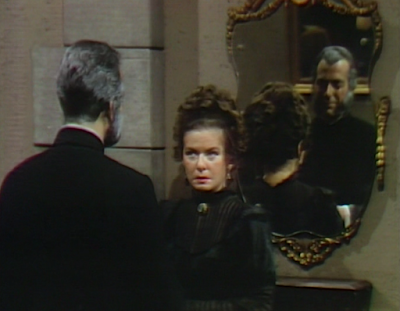 Trask goes upstairs, and Barnabas comes in with Quentin. She explains that Jamison is with a visitor. Barnabas leads Quentin into the drawing room. Judith follows, and says she can't bear to look at him. Barnabas sits Quentin in a chair. He tells Judith that it's not Quentin's fault. She describes the secret things he's done, books he has in his room, and the wands he brought back from the orient. She says he's being punished for his godless ways. She says they must wait for Jamison. 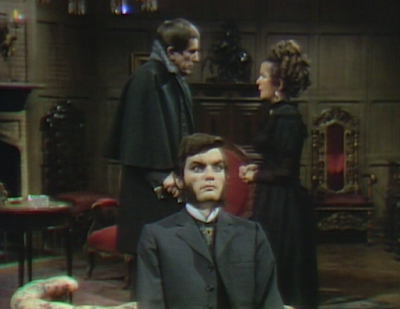 Later, Judith comes out of the drawing room. She hears Trask finishing his chat with Jamison. The two come downstairs together. Jamison says he can feel the body is in the house. Judith tells Trask that he's making things up. Trask tells her that the boy is possessed, and asks her where the boy's uncle is. He offers her peace, if she tells him her tragic story. Barnabas comes out. Jamison says Quentin is in the drawing room. Barnabas is shocked, and calls Trask by his name. The reverend asks if they've met. Judith says they must let him help them. 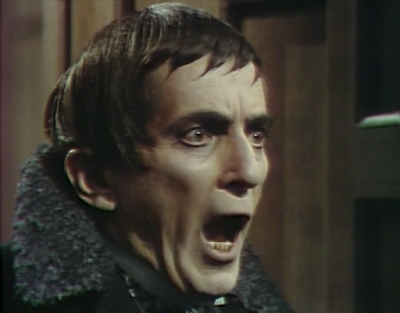 Trask examines Quentin, and offers to save Quentin through the power of prayer. Judith says they must give him a chance. Trask asks Barnabas why he objects to his efforts. Judith asks him to answer. He says he has none. Trask tells them to leave the room. Barnabas refuses. Trask says he senses a spirit in him which is alien to his cause. He says Barnabas may not be aware of it, but he must trust his feelings. Jamison asks Trask what he's going to do. He tells him that he's going to make him the young boy that he is. Judith and Barnabas leave Trask alone with Jamison and Quentin. 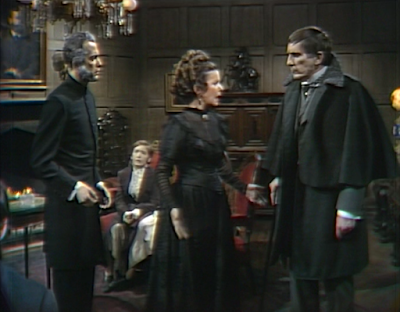 Barnabas asks Judith what she knows of Trask, adding that he doesn't trust him. She says he has a school.

Trask turns out the lights in the drawing room. He tells Jamison to kneel. He doesn't, and Trask yells at him. He kneels. Trask begins his exorcism. He says the devil has taken refuge in their bodies. Jamison begins to moan. 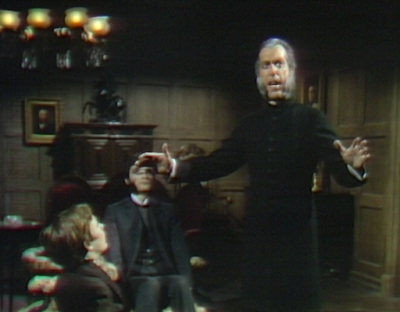 Barnabas stares at his portrait. Judith asks why. He tells her there is a connection between them. They both wonder what's happening behind the doors. They hear Jamison scream, and Trask opens the door. He says they are not to come in, as they would only aid the devil's work. He closes the door, and Jamison screams again. Barnabas opens the door to enter the drawing room. 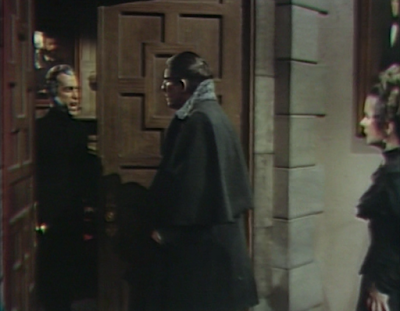 John: Now that we've had a chance to see the full range of Quentin's acting abilities, I have to say that he does his best work as a ghost or vacant zombie. Effectively creepy in every shot! 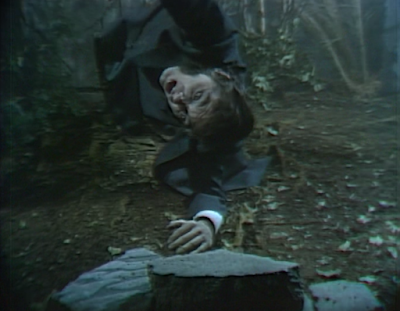 Christine: Zombie Quentin and Vampire Tom Jennings are two of my favorite scary monsters on the show.

John: Our good buddy Reverend Trask is back! Apparently mutton-chops are all the rage in 1897. I'm surprised Barnabas didn't throttle him right away, given their history. I wonder if he'll become a foil to both Barnabas and Quentin before long.

Christine: I loved the look on Barnabas' face when he first saw Trask. Those mutton chops seemed very familiar, and then I realized that with a little upsweep of the hair, Gregory Trask could actually be Wolverine.


John: I'm amazed that Judith was so willing to let Trask do his thing. Most surprisingly, she didn't put an end to it as soon as she heard Jamison screaming.

Christine: She knew Jamison was possessed and desperate to help him, and since she was having doubts about Barnabas, she may have felt it was appropriate to turn to someone she thought may know how to fight evil. I hope Angelique will get to meet up with the reverend soon.
Posted by John Scoleri at 6:00 AM