Trask tells Jamison to kneel as Quentin sits nearby in a zombie trance. He says the devil has been in this room and must be vanquished. He adds that he must be driven from them before he can be driven from the house. 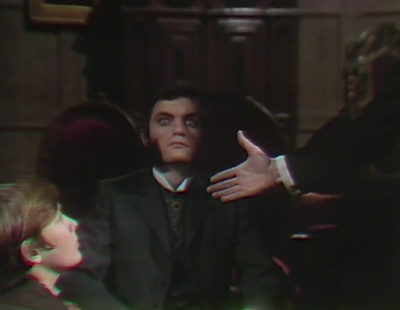 Barnabas stares at his portrait. Judith asks why. He tells her there is a connection between them. They both wonder what's happening behind the doors. They hear Jamison scream, and Trask opens the door. He says they are not to come in, as they would only aid the devil's work. He closes the door, and Jamison screams again. Barnabas opens the door to enter the drawing room. Judith stops him and says they can't go in. He asks her if she thinks he's in league with the devil. He adds that he doubts any church aligns with Trask. He calls him a praying bigot, and Judith asks if he prefers to rely on witchcraft. 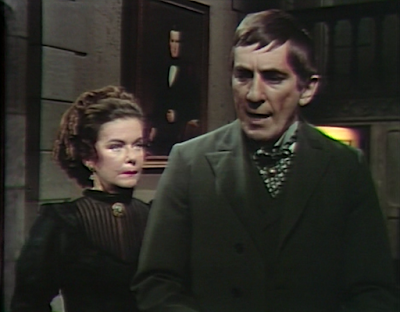 Trask tells Jamison to take Quentin's hand. He does. Trask explains that the spirit will transfer between them. Jamison collapses. Trask calls for God's help. 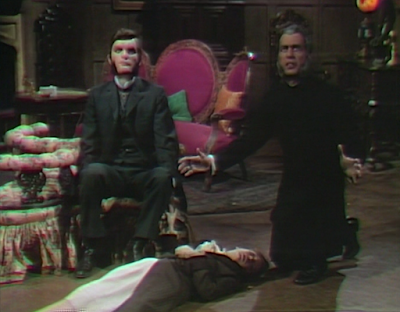 After more time has passed, Barnabas asks if she thinks they've given Trask enough time. He says he cares about Jamison, and suggests she doesn't. She tells him he has no right to speak to her in this manner. He asks what she'd think of Trask. The door opens, and Barnabas asks Trask if he failed. He invites them in. Jamison appears to be back to normal. Quentin is asleep on the couch. Jamison says he must have had too much brandy after dinner. Trask suggests Barnabas that he should believe in the power of prayer now. 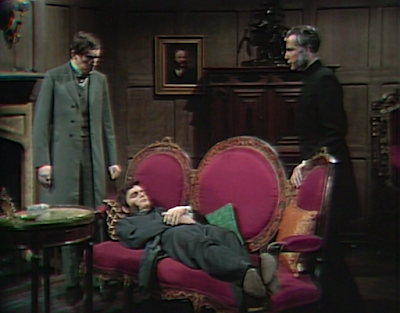 Quentin opens his eyes and starts to get up. Trask tells him not to be too active. Quentin asks if they called a doctor, because he's been stabbed. Barnabas tells him that time has healed his wound. Quentin is confused. Trask was unaware of a murder attempt. He says they should not speak of it in front of the boy. Jamison asks if Judith tried to kill Quentin. Barnabas offers to explain, and Trask tells them he must do so in another room. Quentin and Barnabas leave. 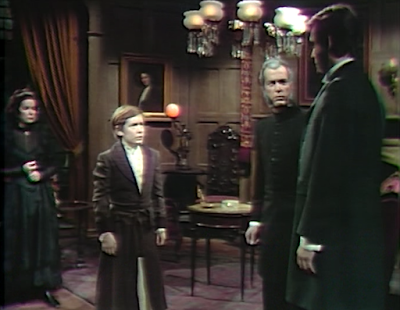 Judith and Jamison argue in front of Trask. He tells Jamison that only one is always right, and he is not on Earth, but above. Jamison is sent outside so Trask can speak to Judith. She tells him that she's grateful. He tells her that it was not his power. Trask tells her that he understands why Edward is concerned about the house. He tells her that Jamison would benefit by going with him to school. She gives him permission to take him, when Jamison enters and says he's not going to go with him. Trask asks to speak to Jamison alone. Jamison takes Trask up to his room. 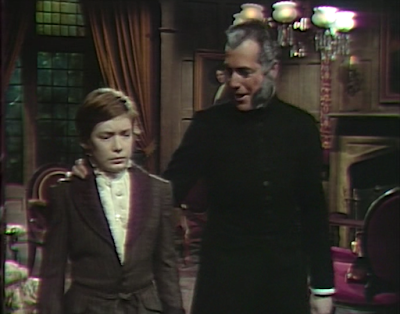 Quentin asks Barnabas if Trask was his savior, and if Barnabas believes it. He says that Judith does, and Barnabas says that Quentin dabbles in odd things, and perhaps that's the reason he survived. He asks Quentin about his wife, and whether he knew she was still there. He asks if he drove her mad. Quentin tells Barnabas that if he wanted him to know everything about him, he would have made him a friend. Barnabas points out that it is Quentin who has sought to make him an enemy. Barnabas says that they can be of use to each other. 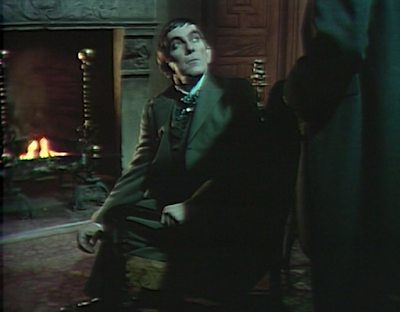 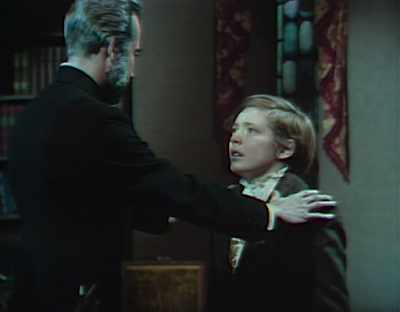 Judith comes downstairs into the drawing room. Quentin grabs her by the throat and demands that she tell him where she's keeping Jenny. He asks if he should kill her. He sits her down and asks why she's been keeping her in Collinwood. He asks if she kept her there to kill him when he returned. Judith threatens to scream. Quentin tells her that he'll find Jenny. 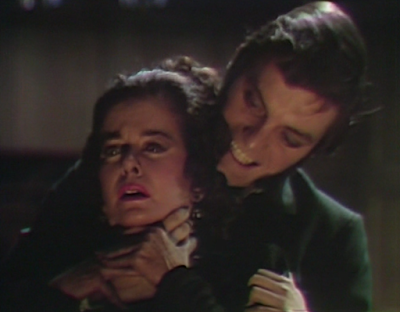 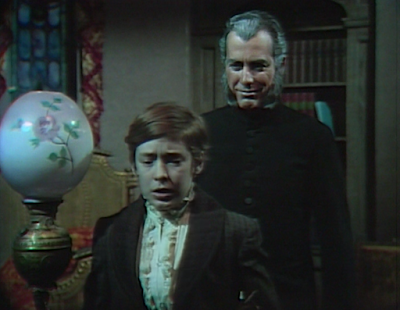 Judith urges Quentin not to search the house. Trask enters the drawing room as Quentin leaves. He tells her that he thinks Jamison is in danger of losing his mind if he doesn't leave the house.

Jamison tells Quentin that he must help him. Trask invites him into the drawing room to speak with his aunt. After he goes in, Quentin listens at the door. 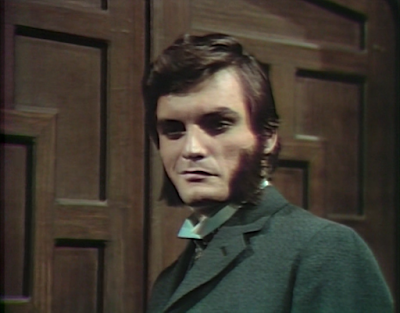 Trask tells Jamison to tell his aunt exactly what he told him. Jamison says that Trask threatened him, and tried to make him lie. Trask says that Judith must choose another school for Jamison. She refuses, saying that he will go with Trask, and that he'll be ready within an hour.

Barnabas tells Judith that he doesn't understand why she would believe Trask over Jamison. There's a knock at the door, and she goes to get Jamison while Barnabas gets the door. Barnabas tells Trask that 100 years ago, there was someone who looked like him in the family history. He asks if Trask is from Salem, and he says that he is. His great-great grandfather disappeared shortly after leaving Collinsport. Judith comes down and says Jamison is gone. Trask assures her that they will find him tonight. 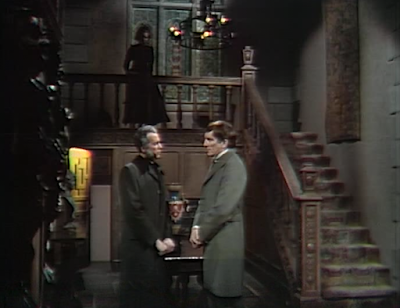 John: So Trask delivered on his promise to bring Jamison and Quentin back. You would think that Barnabas would at the very least appreciate that Trask did what he was interested in doing himself.

Christine: He did choke out congratulations. I think he didn't fall all over himself to show gratitude because he may suspect that Angelique was the one really responsible for the miraculous recovery.

John: Poor Jamison. I don't think he'll do well at Trask's school for wayward evil children in need of biblical-whipping. Of course, if Trask's school was still running in the late 60s, Roger should consider sending David. The key question now, back in 1897, is whether Quentin and Barnabas finally team up to prevent Judith from sending him off.


Christine: It was disturbing to have a priest bring a young boy up to his room alone to have a 'discussion' with him about attending his school and coerce him with 'prayer'. I'm sure refurbished Quentin will find a way to keep his fodder for black mass around at Collinwood, though I tend to think he's more likely to team up with Angelique to mess with Barnabas. 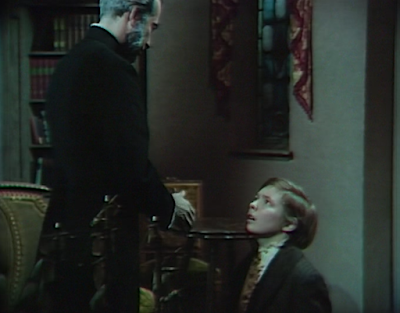 John: I was kind of hoping that Barnabas would bring up how the last time he saw a living Trask, he was closing him behind a brick wall. Of course, if this new Trask's great-great grandfather 'disappeared', I wonder how he has relatives...

Christine: I'm beginning to think we can rationalize all inexplicable events on the show by blaming Angelique. She seems to have the power to do anything, and usually will as long as it serves her purpose to make Barnabas either love her or suffer. If she could bring Quentin back to life, then she could probably bring Trask back too. 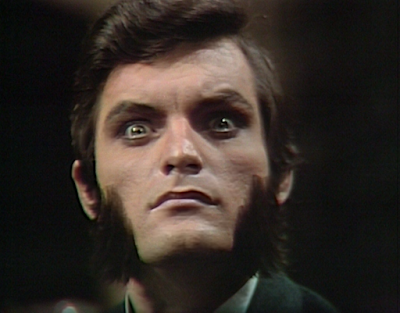