Trask calls upon God to help him find Jamison. Barnabas arrives at Collinwood and hears Trask speaking to God. Trask tells him that he knew it wasn't worth his time to search the woods for Jamison. Barnabas says he cannot take Jamison before Edward returns. Trask suggests that Barnabas doesn't see the evil in the house because he's involved in it. Trask assures Barnabas that he will get Jamison. Barnabas asks what he intends to do with Jamison when he gets him. Trask says he will see the error of his ways. 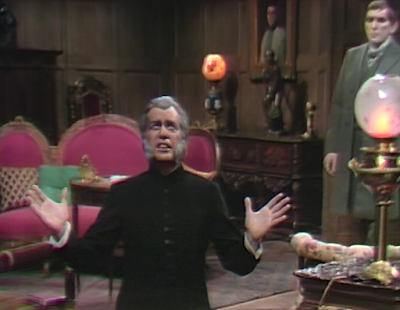 Quentin comes in and tells Trask that his room is ready. He asks that they bring his daughter directly to him when she arrives. He leaves, and Quentin asks what kind of power Trask has, since he was able to lift his curse. Barnabas says they should have have hm investigated. He adds that Quentin seems calm about Jamison's absence, and suggests he knows where Jamison is. Barnabas says he would have hid him himself had Jamison come to him. Quentin denies it. Barnabas and Quentin agree that the school is not a good place for Jamison, but Quentin tells him they mustn't make a habit of agreeing. He leaves Quentin alone. 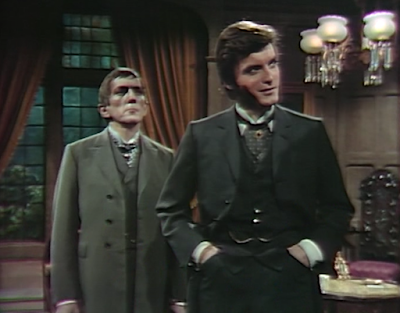 Rachel comes into the drawing room and screams at the sight of Quentin. She doesn't understand what's going on. He tells her that a spell was put on him. He hits on her until she's uncomfortable. He apologizes to her, and she asks him about the spell, and who put it on him. He asks why she wants to know. She says with all the strange things in the house, she thinks she may have an unseen, unknown enemy. She reminds him of when she saw the light in the tower room, and he told her it was haunted. She says she has since confirmed someone is in there, and he runs off, telling her that she may have found the person he's been hunting for. 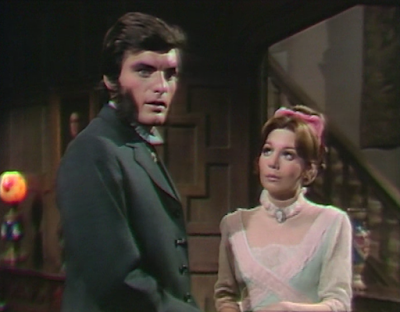 There's a knock at the door, and it's Charity Trask, surprised to see Rachel. She comes in and says the house would make a splendid school. Charity asks if the Collins family knows about her. Rachel doesn't answer, but Charity says her face has answered for her. Rachel says she's the governess, and Charity adds that her father would be amused. Rachel is surprised to hear that Reverend Trask is in the house. Barnabas comes downstairs and introduces himself to Charity. He offers to take her to her father, and Charity tells Rachel that her father will look forward to his reunion with her. She goes upstairs with Barnabas. 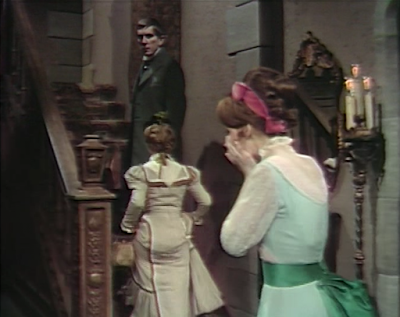 Rachel decides she must face Trask without fear. Quentin comes back downstairs and tells Rachel the tower room is now empty. He says he'll find where they moved her. 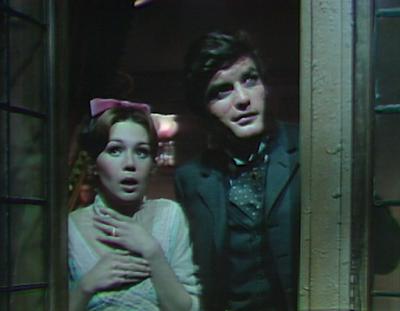 Trask is surprised to hear that Charity found Rachel, and shocked to find out that she's the governess in the Collins house. He tells her they must pray, and give thanks that she has been delivered back to them. 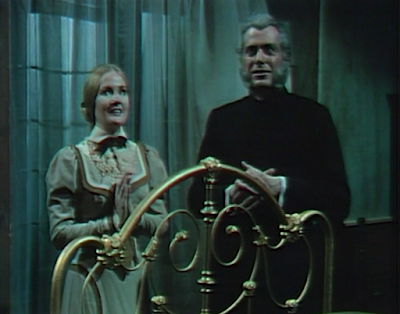 Barnabas says he knew something was wrong when he saw her with Miss Trask. He tells her she can trust him, but she avoids talking about it. She does tell him they can't let them take the children away. Barnabas asks if she went to the school, and she explains her Aunt sent her. She tells Barnabas that at the school she had a special friend, Tim, who she would meet secretly. They were discovered and he was locked up, and she was beaten and starved. She explains that they were there for another 12 years, and she couldn't look at Tim. Barnabas says it can't be like that any more, and she says it's a school for parents that want to get rid of their children. She adds that she even taught there. She says her foster Aunt passed away, and she had to work to pay her outstanding debt to the school. She says that one day, she escaped. 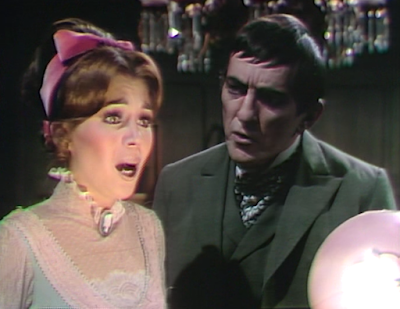 Trask comes in and asks Barnabas to excuse them. He refuses. Trask asks her if that's what she wants, and she tells Barnabas to leave. He says he'll be in the study if she needs him. 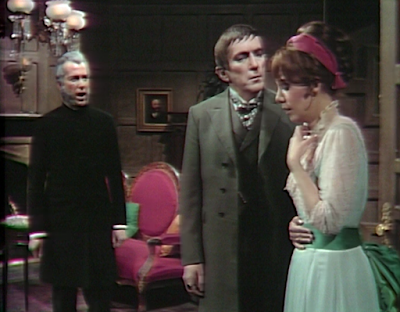 Trask tells her to come to him, and she does. He compliments her beautiful hair. He says when he thought badly of her, he would remember how she looked on the last day in his office. He says she owes him money, and she says it was what she was owed. He suggests that she owes him six months, and she says she won't come back. He tells her that the friend she ran away with came back to fulfill his contract. She doesn't believe it. He tells her that he'll be in his room when she changes her mind. 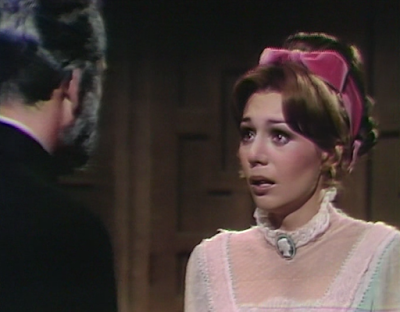 Trask comes to Charity's room. He tells her that Rachel will return to them. 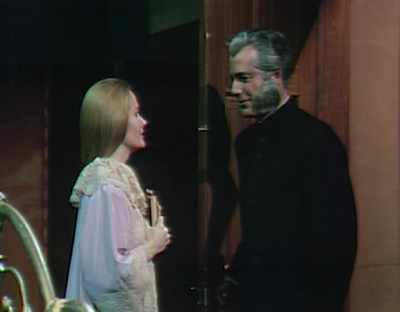 Barnabas tells Rachel there must be something he can do. He says that he and Edward will go to Trask, and she runs off in tears. Barnabas grabs his coat and leaves.

Outside, he sees a light in the room where Charity is staying. 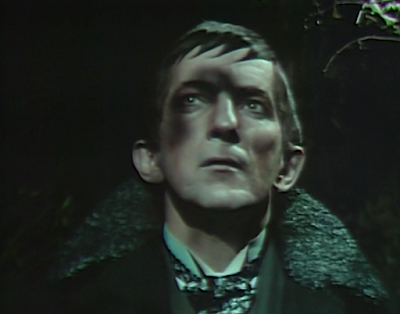 Charity sleeps while a bat flies into her room. Barnabas emerges from the darkness and leans in for a bite. 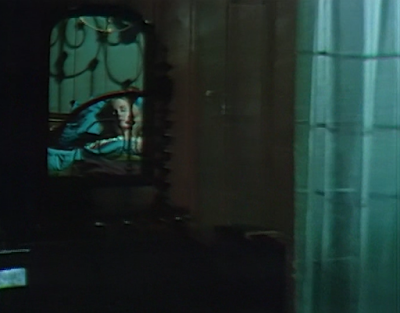 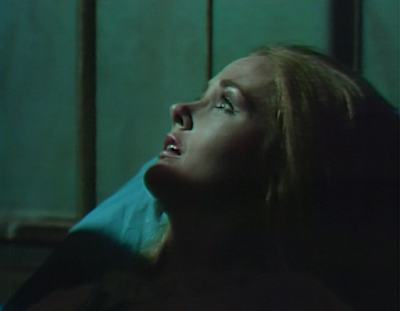 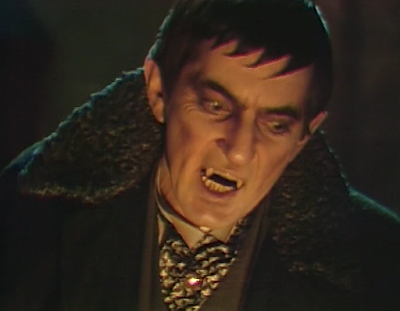 John: Surprising that Carolyn's lookalike in 1897 would be a Trask and not a Collins, but I guess it makes sense since she had a relationship with Tony Peterson... 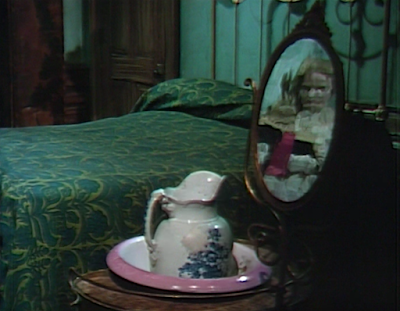 Christine: Charity's snitty introduction leads me to believe we'll have a lot of interesting moments with her and her creepy dad. 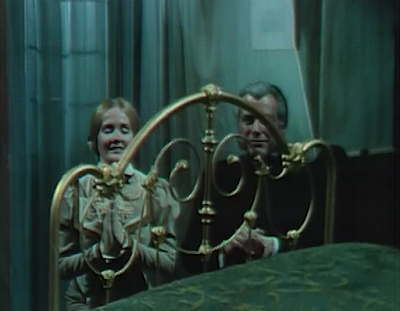 John: When Barnabas looks up to the house to Charity's room, the Cobert music reminded me of his haunting theme from his later score to Burnt Offerings!

Christine: I love how Quentin pretended to be a zombie when first seeing Rachel, and then laughed off his whole undead experience. It would have been funnier had he done the wide, staring eyes and outstretched arms. 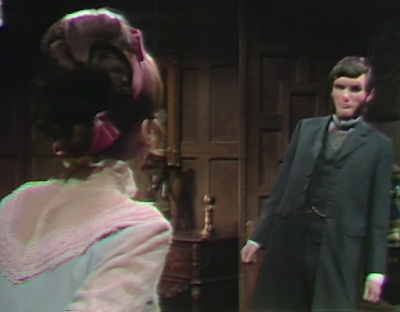 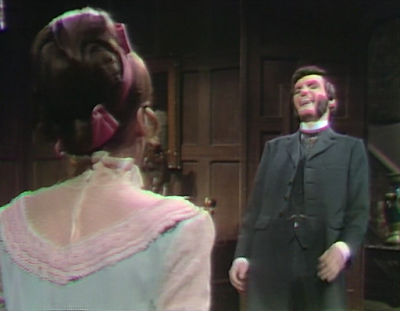 John: Wow. How long has it been since we've seen Barnabas snacking on anyone! I guess it's a good thing Charity arrived when she did.

Christine: Funny how Barnabas suddenly remembered that he was a vampire. While he could have attacked Trask and brought him under his control, he decided to take a page out of Angelique's playbook and mess with his daughter instead. Any excuse to bite a young female.
Posted by John Scoleri at 6:00 AM