Quentin sits by the fireplace and angrily calls to Angelique. Laura comes in and asks if he's talking to himself, or reverting to his old dark tricks. She suggests that he give up trying to get rid of her. He reiterates that he saw her die in Alexandria. He grabs her throat, and she says he's hurting her. He says he's going to do far more than that, and if she's not already dead, she will be soon. 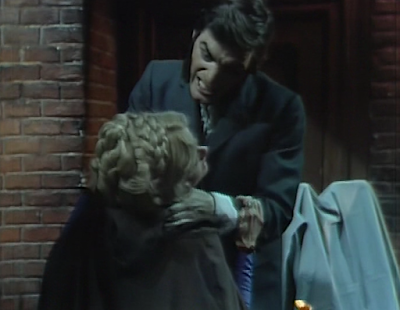 She tells him to let go of her. Suddenly, he lets go of her in pain. He's bathed in light. He describes a pain shooting through his body like fire. He sits in a chair, writhing in pain. He cries for help, and she asks how. He begs her to stop whatever she's doing. She says she's not doing anything other than watching him reap the rewards of a rich and well spent life. 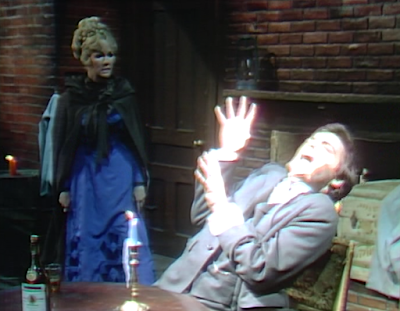 He says he doesn't want to die. She says she didn't want to die on the sacrificial alter in Egypt. She says she remembers the priest dragging her to the flames, asking her why she's crying to Quentin for help, as he was the one who betrayed her. He says he had to. She says the death he ran away from in Alexandria has finally caught up with him in Collinwood. 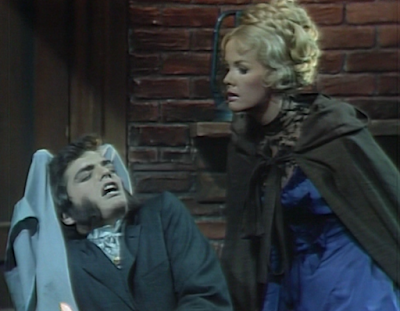 As she leaves, she tells him that dying is not so bad as soon as he gets used to the idea. He collapses on the cottage floor. 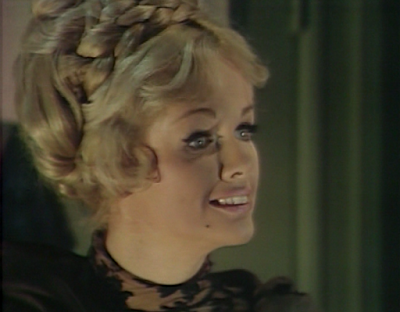 Rachel speaks to Trask on the phone, asking him for more time. Barnabas takes the phone from her and hangs it up. He tells her that if Trask makes her so unhappy, she mustn't talk to him. She explains that Trask thinks she's a thief. She was supposed to work for him for five years to pay him back for her training. She says that the children at the school are abused. Trask is willing to destroy their bodies to save their souls. Barnabas says she need not be frightened of Trask. He says they have a great deal to talk about, but now he must leave, and he walks out on her. 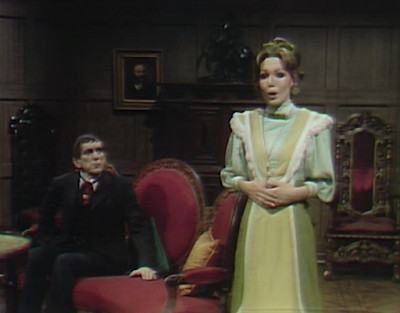 Angelique stands over Quentin's body. Barnabas arrives at the cottage, and she says he took his time. He sees Quentin and asks if he's dead. She says he's close. She tells Barnabas that Quentin will die unless Barnabas comes to his senses. She says he can only be with her, and she would kill anyone to have him. He asks if killing is her only way of proving her power over people. She says she'll be sweet, gentle and tender if that's the kind of wife he wants. 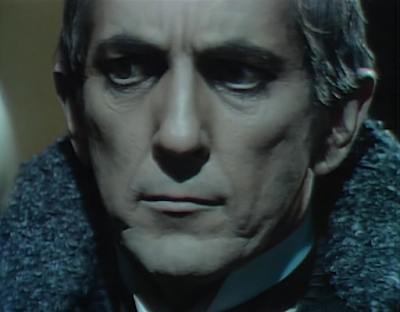 She says that she'll save Quentin if he will let her assume her proper position as Mrs. Barnabas Collins. She mentions that she raised Quentin once before, and he realizes that she was responsible, not Trask. Angelique asks if Barnabas wants David to die. She reminds him of the link between Quentin and David. She asks if she'll accept his terms, and he agrees. He tells her to make Quentin rise. She says she'll do it once she's recognized as Barnabas' fianceé. 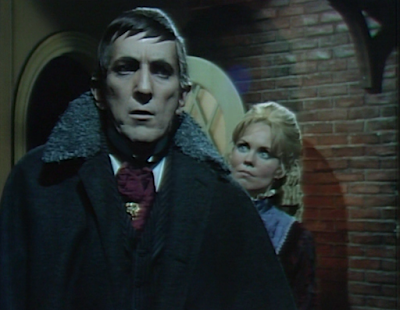 Laura is in the drawing room when Rachel enters and introduces herself. She says she's sorry that she's meeting her under the circumstances. Rachel asks what she means, and Rachel explains that the children have been sent away. Laura is out of sorts, and collapses in a chair. She dreams of fire, and dreams of the sun God Ra, who provides her life force. 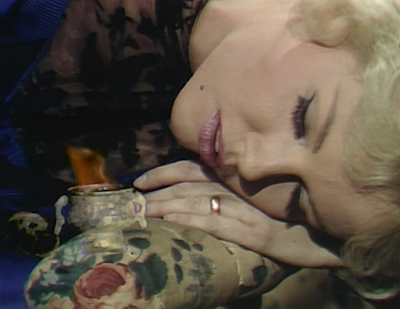 Rachel comes downstairs and opens the door. Barnabas enters with Angelique. He reluctantly introduces her as his fianceé. Rachel is surprised. Angelique asks Rachel if she'll show her around. She says she thinks they'll have a great deal in common. Rachel excuses herself and leaves them in the foyer. Angelique says she doesn't have good manners. Barnabas demands that she make Quentin rise, and she says that she will. 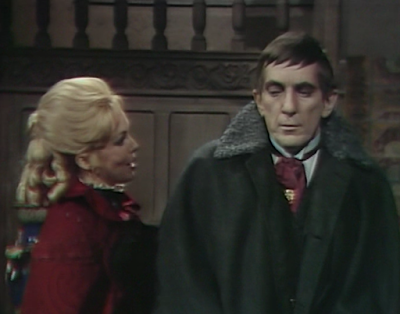 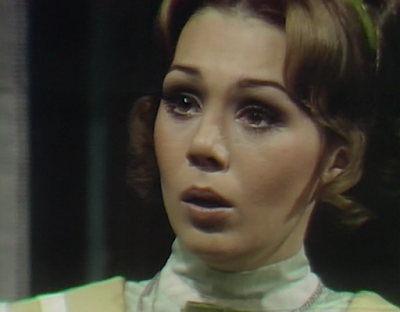 Rachel sits in the garden, in shock. Barnabas surprises her. She says she feels foolish assuming they were friends. He says they are friends, and he hopes that someday they will be more. She's confused. Barnabas explains that Angelique is here for a reason. He points out that things aren't always what they seem. He asks her to trust him. 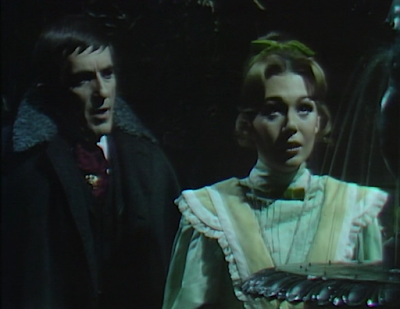 Angelique kneels over Quentin's body, and calls him to return to the land of the living. His eyes open and he sits up. He asks what happened, and she tells him his health is shaky. 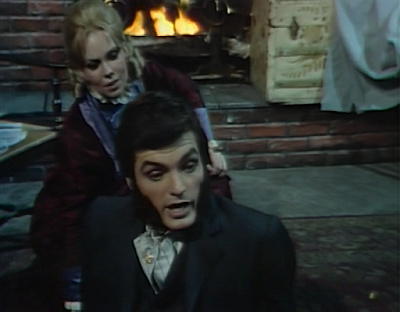 He says that Laura did it. She says that she was responsible. She was forced to do it by her feeling for Barnabas. She explains that they're engaged. He says she's an odd choice for Barnabas' bride to be. 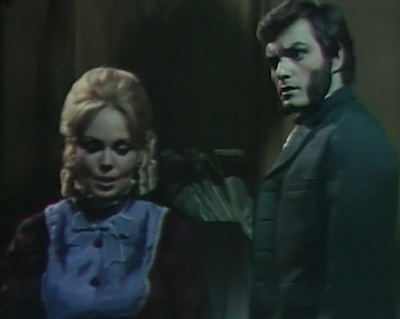 She starts to leave and he grabs her arm. She threatens him if he touches her. He asks her to do him one more favor—to get rid of Laura. She says that no one could have survived the fire in Alexandria, and yet Laura did that. He begs her to help find the answer. Angelique looks into the fireplace. She says that she sees an urn, in which burns the flame of Laura's life. When the flame is extinguished, her life will be over. Quentin asks where he can find the urn. She says he asked one last favor, and she granted it. If he finds the urn, he can extinguish the flame and be rid of Laura forever. 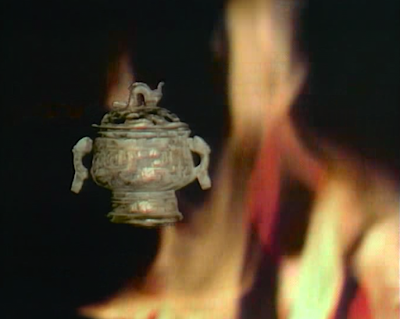 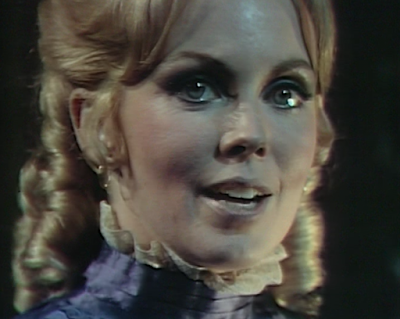 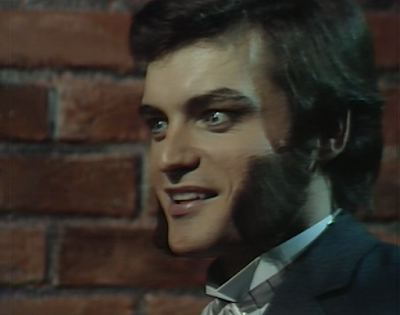 John: It's deja vu all over again... Barnabas has once again been fished in by Angelique. First stop—she has dashed his hopes with the one true object of his affection. We all know that they are not destined to live happily ever after. It might be nice if he summoned his own powers as a vampire to give Angelique a little more of a fight...

Christine: He does not appear to be taken in by her promise to be a sweet and gentle wife, probably because he's heard that from her before, and she's never been able to pull that off. Still, I've got to wonder what she's expecting from the vampire life with Barnabas. Does she intend to move back into the Old House with him and spend evenings cuddling in front of the fire?

John: So have we now learned the true origin of Laura the Phoenix? Was she born of the fire in which she was burned alive in the pyre in Alexandria? I can't recall from our history lessons how far back the Laura Collins/Murdoch lineage could be traced.


Christine: In Episode 157, we learned that Laura Murdoch Radcliffe died by fire in 1867, 100 years after Laura Murdoch Stockbridge, so it's not her first time Phoenixing, and she must be on her third cycle at the very least. Quentin really made quite a spectacle of himself in today's episode. 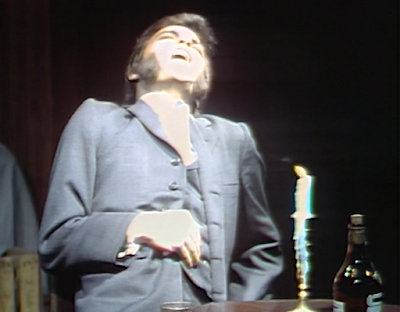 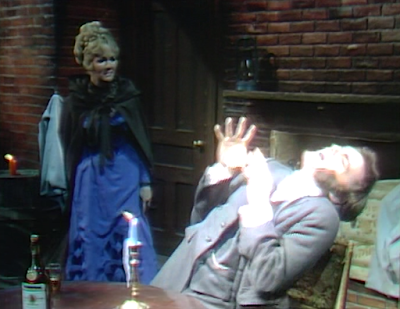 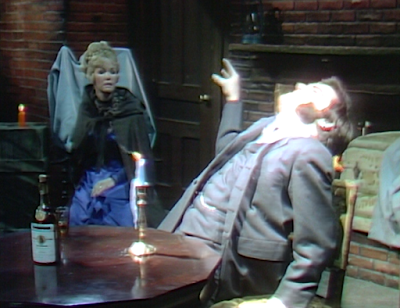 John: So let's say Quentin finds the urn and extinguishes the flame. If that truly cuts off Laura's timeline, that would mean no more David Collins, right? So Barnabas would have to prevent that from happening. Things are about to get interesting in Collinwood!

Christine: You're right! If Quentin snuffs Laura out, David will not be born from his great grandmother's incestuous relationship with his father! I wonder if Barnabas is aware that she is the same Laura Collins who will become David's mother, though. In a past where everyone is the spitting image of someone else in the present day, it might not immediately occur to him that she is the same person. 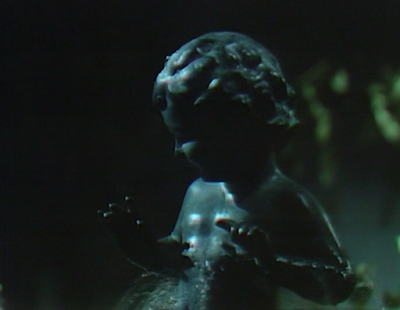