Carrie asks why they have to bring Gerard back, and Daphne says it will be worse if they don't. She says it will be different, and tells them to light the candles. Tad gets the ship and puts it in the star. They begin an incantation to bring Gerard back. Daphne says they must help them cross the barrier, and tells them to concentrate. They hear a knock on the door. Willie tells them to open the door. They try to clean up the things on the floor, and Daphne hides. Willie threatens to call David's aunt. They let him in. Willie asks what they're doing, and Tad says it's a game. Willie says he knows what they're up to, and he says he's got the devil in him. He says Quentin told him about him, and calls David Tad. Willie asks them to tell him about their black magic. Tad and Carrie drop the act. Willie says he's going to take them to Barnabas. Willie grabs Tad and tells Carrie to come with him. After they're gone, Daphne wonders where Gerard is. 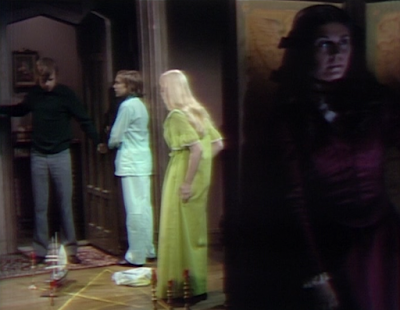 Willie keeps Tad and Carrie in the drawing room. He hears dogs howling outside. Carrie says she wants to go back to her room, and Willie says they won't go to their rooms until he knows what's going on. He hears something and finds Maggie coming downstairs. She tells him that they're calling her. He helps her back upstairs. 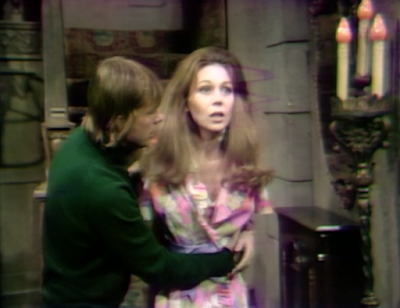 Carrie asks Tad who's calling Maggie. She asks what kind of animal is making the noise; it's like a dog but different. He says he's heard it before, in their own time. Carrie doesn't remember. Tad wonders if Daphne is still in his room. Carrie says if they don't, Gerard can't come back. Tad asks her if she feels his presence in the room. They hear the carousel music box. Tad says it wasn't his fault that they failed. They turn to see Gerard standing in the room with them. Hallie says it wasn't their fault. Tad says Gerard should be angry with Mr. Loomis. 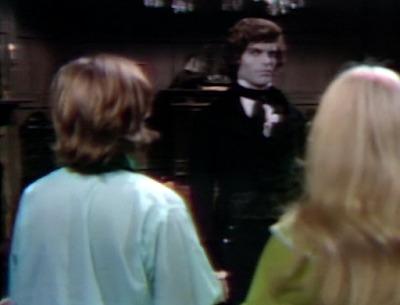 Gerard approaches them when Daphne enters. She asks Gerard what he was going to do. She says that the stars are out of position, and they'll have to try again tomorrow. She says she hopes when he's alive that he'll forget how important punishing has become to him. Gerard disappears. Tad asks where Daphne will go. She says that Quentin knows everything, except about Gerard and her hiding place. She tells them that they mustn't tell him. She says she's going to Rose Cottage. She kisses the children and leaves. 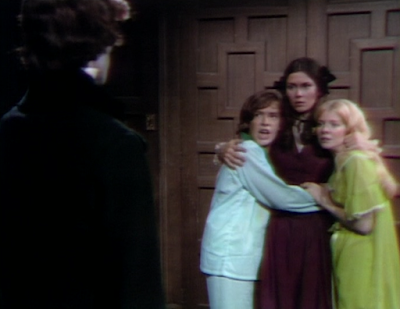 Willie tells Maggie to lie down. He asks her what happened to Mrs. Johnson, because she's not supposed to be alone. Maggie tells him to leave, but he refuses. He says it will be dawn soon, and then she'll be able to rest. He asks her who is out there calling her. 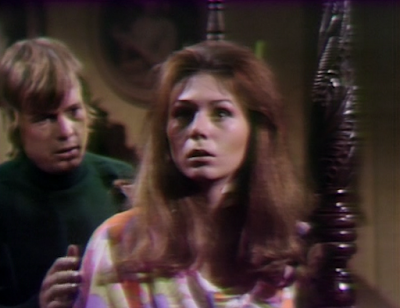 The next morning, the kids come into Maggie's room and beg her to not let them send them away. Maggie asks where they want them to go, and he says Windcliff. Maggie asks why Windcliff. She reminds David that he spent time there over a year ago. She asks if he remembers. Willie checks in on Maggie, and tells the kids that Julia and Barnabas are waiting for them in the drawing room, and sends them downstairs. Maggie asks him what's going on. She says David and Hallie need her. He says he didn't want to tell her, but the kids are possessed. 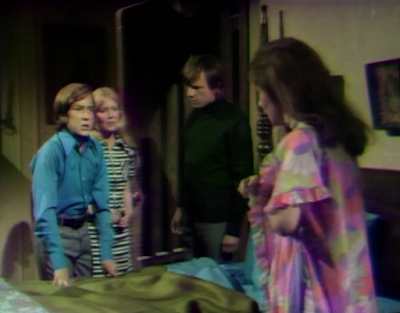 Tad finds David's suitcase packed in his room. He says they can't go. They fear what Gerard will do.

Willie finishes telling Maggie that David and Hallie are now Tad and Carrie.

Tad and Carrie sneak downstairs and out the front door. 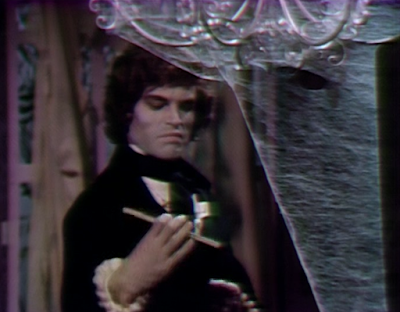 She says that Quentin could have told the family everything. Gerard grabs her, but then he lets her go and disappears. Daphne is concerned that Gerard will destroy Quentin and everyone else in Collinwood. She decides that she must not help bring him back to life. Tad and Carrie burst in, saying that they're going to be sent away, and they won't be able to bring back Gerard. She tells them to go back to Collinwood and do as they're told. After they're gone, she says that with the children gone, Barnabas and Julia won't interfere with their plans. 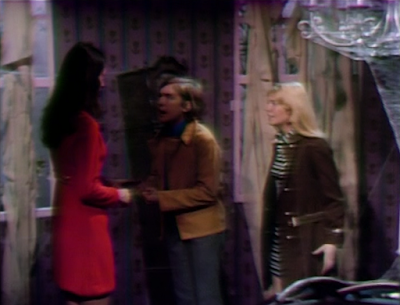 In the playroom, Gerard stands before Rose Cottage with a lit candle. He sets the dollhouse on fire. 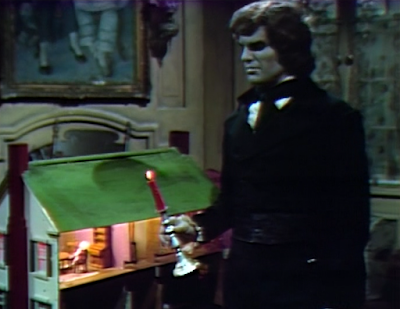 In Rose Cottage, Daphne sees flames. She tries to get out, but the door is stuck. 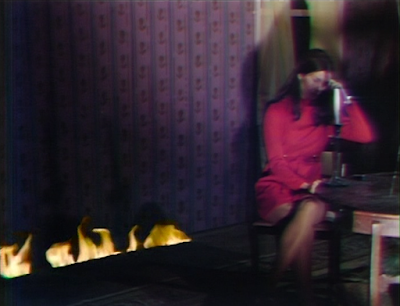 In the playroom, Gerard holds the dollhouse door shut with his finger. 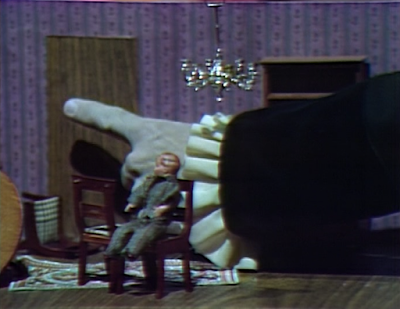 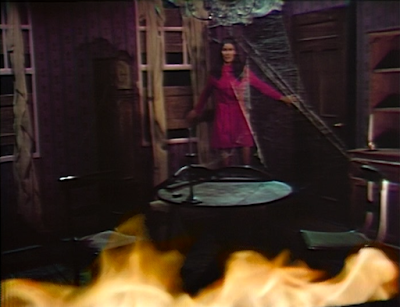 John: Willie and Maggie are reunited! And just like old times, she's under a vampire's spell. Too bad we never got a chance to see Willie and Barnabas have that particular discussion. I'm sure he was even harder to convince than Julia that Barnabas wasn't responsible!

Christine: That may have been true a few years ago, but I think Willie knows Barnabas trusts him as a confidant, and is assured that he wouldn't put the bite on Maggie again, or at least would admit it to him if he did. I did enjoy Tad's smirky demeanor and the banter with Carrie over Willie's modern day lingo that was quickly dispatched when Willie asserted that he was bigger than him in response to his 'make me' challenge, and yanked him out of the room. John: Daphne appears to be adapting well to 1970s living. She's got herself a new boyfriend (Quentin), a new wardrobe (courtesy of Victoria Winters and/or Orbach's?), and if she plays her cards right, she might just be rid of the old ball and chain (Gerard) and those two annoying kids!

Christine: It doesn't seem like it will work out that way with conditions on track for the destruction of Collinwood.

John: I guess we'll find out on Monday if Rose Cottage is truly destroyed... and if Daphne is inside and doesn't survive, won't that tick the murder box as well?

Christine: That is a possibility, though if she burns alive, it seems doubtful that anyone will have reason to suspect murder over an accidental death. Gerard's purple ectoplasm seemed to be tainting the other characters today, and it made him appear particularly ghoulish. 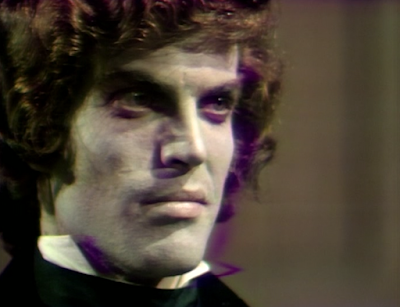