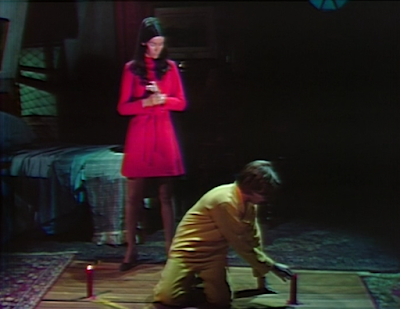 Julia returns to Tad's room, and Quentin stops her outside. He asks her to take him to see Hallie. Julia tries to check on David/Tad, and Quentin tries to block her. She won't be discouraged, and gets into the room in time to find Daphne performing some sort of ritual with David/Tad. Daphne tells her she must get out of the room. Julia grabs Tad and hands him to Quentin. Julia asks Daphne who brought her to life. She says Julia wouldn't understand. Julia asks if Gerard is alive, too. She says that he's not, and asks Quentin to make Julia understand. Julia accuses Quentin of knowing what was going on. He says Daphne is the only one who can save the children. Julia sends him out with Tad so she can talk to Daphne alone. 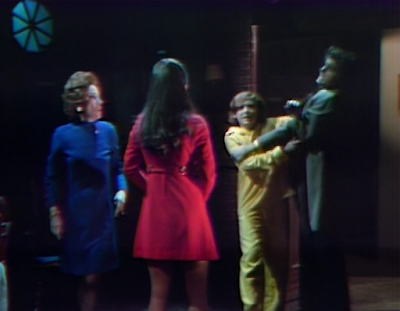 After Quentin is gone, Julia asks Daphne who is responsible for bringing her back to life. She demands that Daphne answer her questions. She says the children will die and the house will be destroyed if they don't stop Gerard. Daphne says that she's the children's only hope of staying alive. Julia says she's talking about David and Hallie. Daphne says she can't do anything for them. Julia says she wants Daphne to come with her to the old house and tell her everything she knows about Gerard and the children. She reminds her that the children will die and Quentin will be destroyed. She assures her that Tad and Carrie will be well cared for. Daphne says she won't help David and Hallie at the expense of Tad and Carrie. They leave Windcliff together. 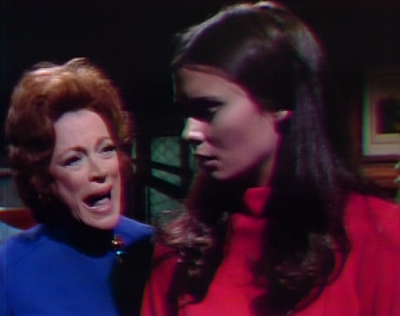 Back at the old house, Daphne sits by the fire. Quentin flirts with her. She says he knows her place is with Tad and Carrie. He says he knows she's also dedicated to bringing Gerard back to life. She explains that it's not because she wants to. He says there's no good that can come of that. 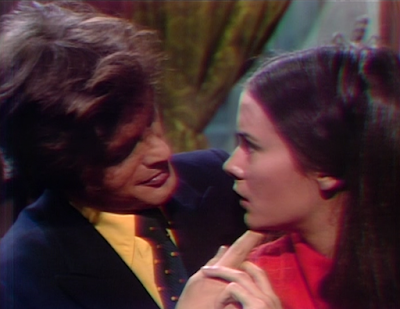 Julia walks in on them, and assures Daphne the children will be alright. Quentin asks Julia about her plan. She says she wants Stokes to come and talk to Daphne. She sends Quentin to contact him. She mentions that in the future, Stokes was in Europe when Collinwood was destroyed, but when they returned to 1970, he had to international travel plans scheduled. 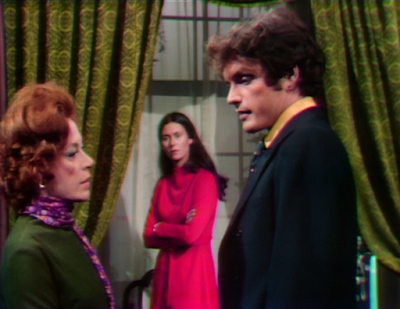 Carrie asks Tad where they took Daphne, and what's going to happen to them. He says he doesn't know, but he tells her they're not safe. He reminds her what Daphne said—they're only safe if they bring Gerard back to life. Carrie says they would have been better off to be like Gerard. Tad says they're going to run away from Windcliff. 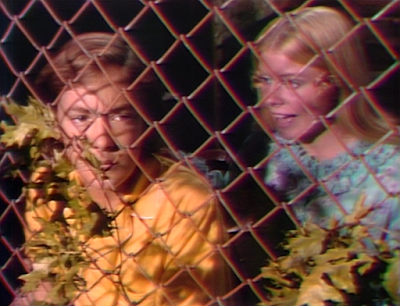 Julia asks Daphne why she doesn't trust her. Daphne says it's not a matter of trust. She explains she's dealing with a power beyond her ability to control. She says she tried in the past and he made the children suffer. Julia asks if she was ever in love with Gerard. Daphne says the question is irrelevant. 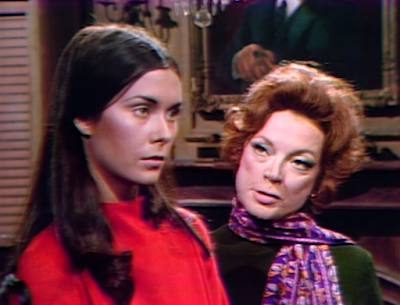 The kids escaped from Windcliff. In the woods, Tad suggests that they catch their second wind. Carrie asks how far Collinwood is, and he tells her it's only a few miles, but they're not going there.

Julia asks Daphne if she thinks Quentin is the reincarnation of a Quentin that lived in 1840. Daphne says she wouldn't know, and Julia accuses her of having been in love with Quentin in 1840, and being in love with this Quentin. She says the first Quentin was more aggressive. She says 1970 Quentin is a gentler man—easier to know and love. 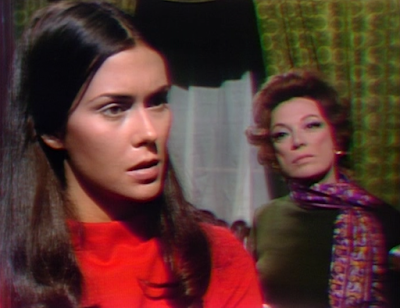 Quentin returns and says he spoke to Stokes' housekeeper. He says his housekeeper says he took a plane to Europe this morning. Julia says time is running out. She says soon there will be a murder, and then Rose Cottage will be destroyed. And then the disaster at Collinwood will follow. She turns to look at Daphne. 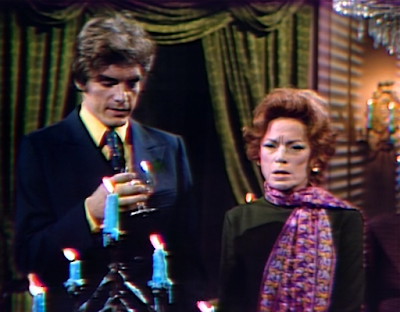 The kids make their way through the cemetery. Carrie asks why they came to the cemetery, and he says no one will find them there.  They sneak into a crypt and find a coffin sitting out in the open. Carrie asks him what it's doing there. The coffin creaks, and opens. They hide behind pillars in the crypt. A figure dressed in black crawls out and leaves the crypt. Carrie says they never should have come here. 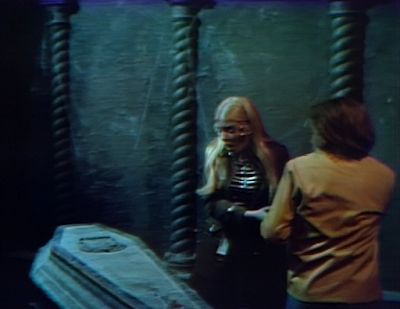 Later, Tad and Carrie leave the crypt. As they make their way through the woods, they hear dogs howling. They stumble across a body. Carrie asks who it is, and Tad says he doesn't know. David says he appears to have been attacked by an animal that bit his neck and drained his blood. Carrie reminds him the same thing happened in 1840. He says he remembers, and they run off. 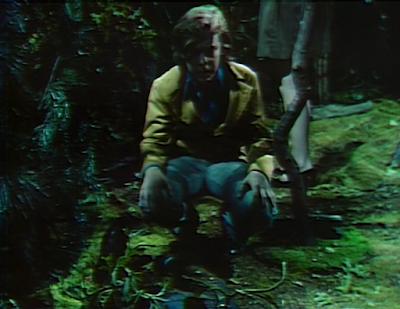 Julia gets out her amulet and tries to hypnotize Daphne. She does, and tells Daphne that she will answer all of her questions. Julia asks if she knows who is destined to be murdered. Daphne says she does. Julia asks their name. Daphne stands up, and says the person who will be murdered is her. Julia asks if she knows how and when it will happen. Daphne says the green flag will be waved in the window three times. Julia remembers finding David with the green flag in the tower room. She asks Daphne if it will happen before or after the destruction of Rose Cottage. Daphne says Rose Cottage will be destroyed first, tonight. 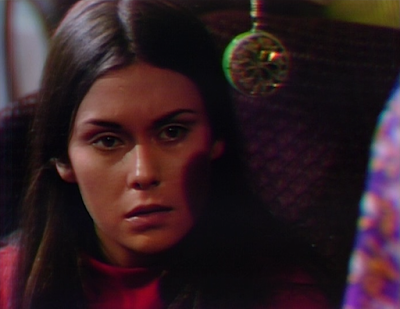 John: Is this really the time for Quentin to be flirting with Daphne? And if Daphne loved Quentin in 1840, wouldn't he remember her? I mean, he is the immortal werewolf with the Dorian Gray painting still, right?

Christine: Quentin was flirting with Daphne when she was a ghost, so apparently there's no time that's not a good time for Quentin to flirt. Daphne loved his uncle Quentin. This Quentin did not achieve immortality until 1897, so he could not have been the same Quentin.

John: When exactly did Windcliff move so much closer to Collinwood? I recall folks making the long trek by foot — wasn't Maggie the first? But I thought it was at least an hour away by car originally.

Christine: I think Maggie was the first to go wandering away from Windcliff in Episode 294. We were led to believe Windcliff was quite a trek in Episode 265, after Sam Evans and Joe Haskell made the drive and met Dr. Hoffman for the first time.


John: Hmmm. I was extremely disappointed when it looked like the murder had not only occurred off-screen, but that the victim appeared to be a nameless, faceless character. Imagine if Daphne hadn't told Julia that she would be the murder victim. Clearly they would have ticked the murder checkbox when the vampire's victim turned up? And Tad is a pretty sophisticated 1840s-era kid to do a forensic analysis on the murder victim to determine that the two punctures on his neck and a loss of blood clearly indicated he was the victim of an animal attack. And thanks to Carrie, we now know that there was a vampire running around in 1840 Collinsport as well! 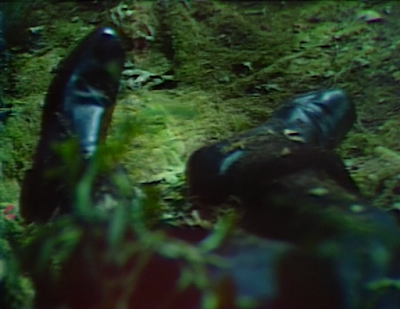 Christine: Since Barnabas was locked in a coffin at the time, we know it couldn't have been him, but could it have been one of his victims he may have inadvertently turned? I was pleased to see the reappearance of Julia's hypno-medallion, but was confused by the fact that Daphne never looked directly at it. I wonder if Kate Jackson was afraid she might really be hypnotized. 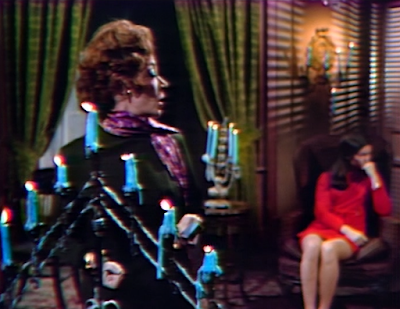 First, I want to say how much I love your blog. Second, I like to respond to Christine's comment that one of Barnabas's victims could be the vampire. In a earlier episode, Barnabas told Julia that he wouldn't be aware of another vampire unless he was the person responsible for making him. So, it's unlikely that it was one of Barnabas's 1795 victims.

My name is Billy, wasn't aware my profile wasn't available to the public, maybe that is a smart thing

Hey Billy - Thanks for following along, and taking the time to leave a comment! We hope you'll continue to weigh in on episodes as we enter the home stretch.

After 1100 episodes, I think we're a bit jaded, knowing that the writers will play fast and loose with what has come before when working on the current storyline. I can also envision a Terminator-level time-travel paradox where they go back to 1840, Barnabas does some vamping, and THAT'S what they're finding out about in the future, even though in a linear sense those events couldn't have happened yet...

Whoever is responsible, extra vampire action is never a bad thing!