Carolyn asks her mother to sit down so she can begin her concert. She starts to sing the Pansy Faye song. Julia hears her from upstairs and rushes into the drawing room, screaming for Carolyn to stop. Elizabeth asks her what's the matter. Carolyn asks Julia if she liked her song. Julia says it's too late, and rushes upstairs to check on the children. Carolyn resumes singing, and ultimately collapses. 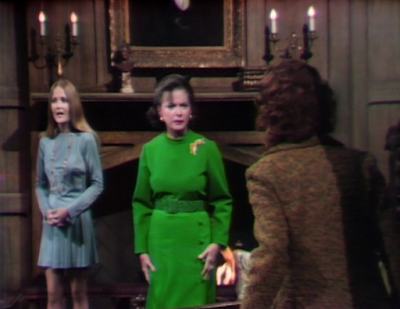 Just as Julia reaches the top of the stairs, Elizabeth calls to her and she runs back down. She checks Carolyn, who asks what happened. They tell her she fainted, and she asks if she finished her song. Her mother tells her that she did. Carolyn says she won't forget that Julia was rude, and didn't like her song. Julia tries to explain that her singing was one of the clues she and Barnabas brought back from 1995. Carolyn says the clues are ridiculous, and Julia asks why. Hallie and David eavesdrop on them as Julia accuses Carolyn of seeing Gerard. She says he is making her act this way. Elizabeth tells Julia not now, and she goes upstairs to check on the children. 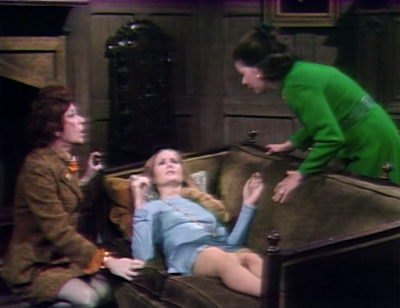 Hallie says it's all beginning just like she knew it would. He asks why Carolyn is Leticia. She asks if he wants Carolyn to live with them in Rose Cottage. Julia walks in and asks how they are. He says they feel terrible. Working on the Middle Ages in the middle of the summer. She asks if they heard the singing downstairs, and they deny it. She leaves them to their studies. Hallie says sometimes she wishes they had told someone, and he says that there may be a way. 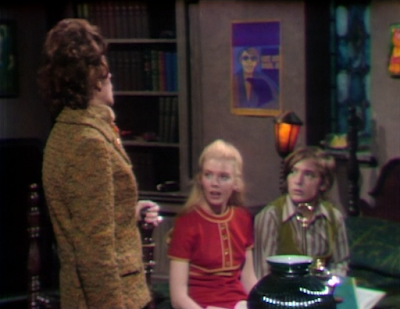 Barnabas rises from the basement as Julia arrives at the old house. She tells him that Carolyn has seen Gerard, because tonight she sang her song. She says she checked on the children, and then came to see him. She says that she's convinced Carolyn is possessed, noting that she says she has a second sight. Barnabas asks her the words of the song, and Julia recites, "I want to dance with you..." He asks if she remembers Pansy Faye, and points out that was her song. Julia says Pansy Faye couldn't be alive in 1840. Barnabas says Gerard has made his mistake — he doesn't know that Barnabas was in 1897 and knew Pansy Faye. 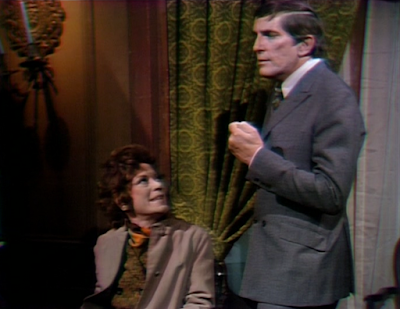 Carolyn tells her mother that she feels different now. After Jeb's death, she was inside herself, but now she's changed. Barnabas and Julia arrive. Carolyn says that Julia ran to him and now he's come to question her. He says he thought she took their situation seriously. Carolyn tells her mother to go to David and Hallie. Elizabeth says that once the night is through and nothing has happened, she hopes they'll forget their ridiculous fantasy. 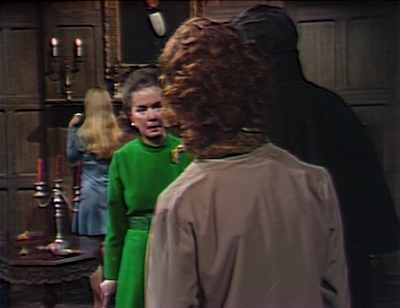 She goes upstairs, and Carolyn says they want to know where and when she met Gerard. Barnabas says he actually wants to know where she found the song she sang. She says she found it in a book. She says she heard Julia mention there was a concert on this day in 1839. Barnabas asks Carolyn if she ever heard of Pansy Faye. She says no, and he says the Carolyn with second sight would. He asks her to demonstrate her talent. She says she doesn't have to prove it. He asks if she's willing to help them, and asks her to see into the past to find where she learned that song. She says she thinks she learned it in another life, and he asks where. Carolyn has a vision of the carousel in the playroom. He says she must take them to the playroom. She says she saw it in her mind, and he asks if that's all. She says she's helped them all she can, and begs them to leave her alone. Barnabas tells Julia they must get David and Hallie out of the house tonight. 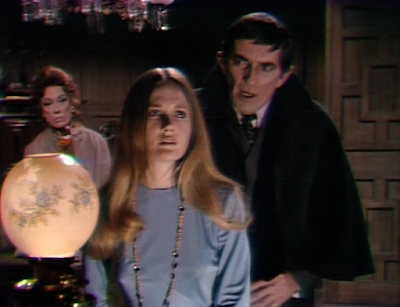 David picks up a doll that looks a bit like Barnabas. Hallie asks if they put the doll in Rose Cottage, will Barnabas be able to find the room. He says Carolyn did. Hallie says that Gerard will see to it that no one tells. David says that Barnabas is different. He tells her it's worth a try. 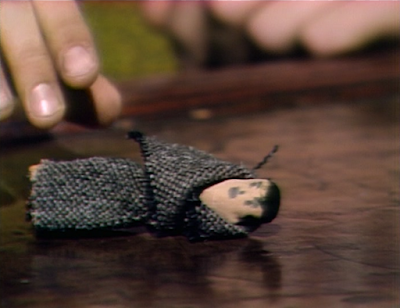 Julia tells Barnabas that Carolyn is calmer. Barnabas tells Elizabeth that Carolyn's condition is proof that something is happening. He asks to bring the children to Stokes' house, and she refuses. Barnabas asks if she's willing to risk the children's lives? 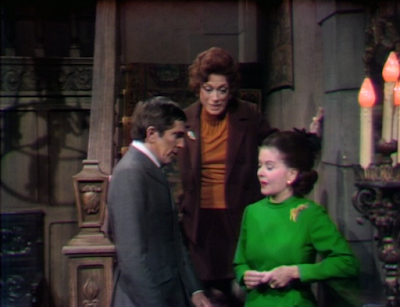 As they approach the playroom, Hallie asks David if Gerard will know they put the doll in Rose Cottage. He says not to talk about it once they're in the room. They enter, and call to Gerard. He doesn't appear. They place the Barnabas doll inside Rose Cottage, and leave the playroom. 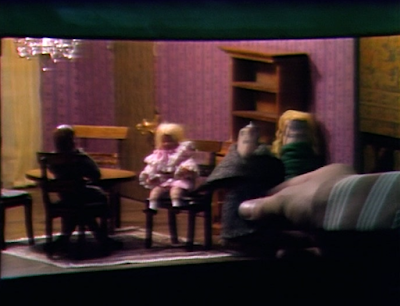 Elizabeth says she doesn't know why she brought them to the children's room. The kids aren't there. They come in after the others and David asks if a convention is underway. Elizabeth asks where they've been. Barnabas suddenly feels something. Julia says it's cold. Barnabas notices that Elizabeth feels it, too. The children do not, and Barnabas tells them to go to Hallie's room. He tells Elizabeth they must get the children out of the house. 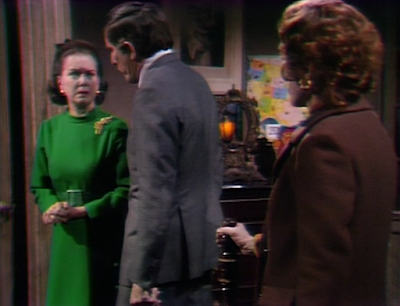 David tells Hallie he knew something was wrong as soon as he felt Gerard's presence in his room. They return to the playroom and find the Barnabas doll broken on the floor. Hallie says Gerard didn't want Barnabas to be there.

Barnabas tells Julia to bring the children to Stokes. Elizabeth asks him to promise that the children won't be alarmed. He says they'll handle it.

Hallie tells David she doesn't want to be punished, and he tells her to go to her room. 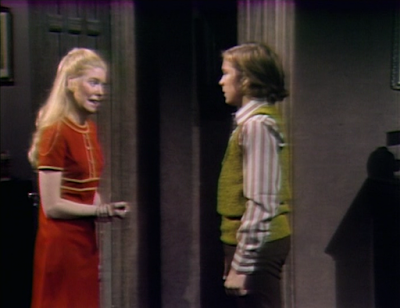 Julia and Barnabas go upstairs to get the children.

In the drawing room, Elizabeth speaks to Gerard, saying she didn't know what to do. 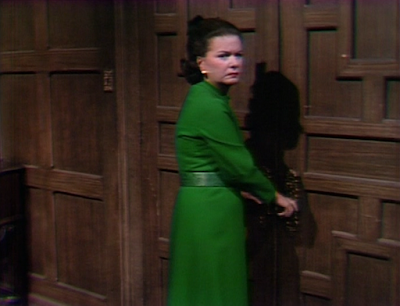 Barnabas goes into David's room and finds it empty. 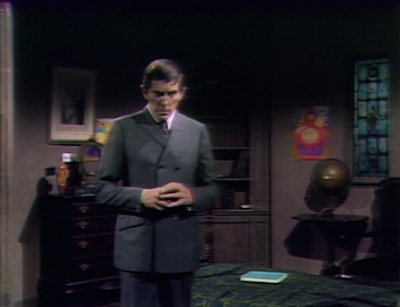 David comes downstairs, and says yes. He goes out the front door. He asks Gerard if he's going to be punished. He says he must follow, and walks into the woods. 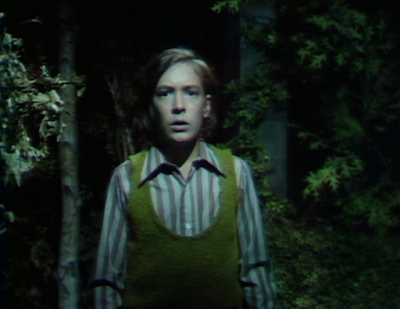 John: Are Barnabas and Julia keeping their own Catastro-tracker? Surely they know the murder has to take place before bad things will truly happen in Collinwood? Each time one is identified, it's as if they've forgotten that the individual clues don't appear to matter.

Christine: With every clue that gets checked off the list, they know their chances of saving Collinwood are diminished. If the last clue happens before they can stop it, then Collinwood is lost.

John: What dumb luck that Pansy Faye only sang the one song over and over, ensuring that years into the future that would be recognized as her (one and only) calling card. I wonder if Nancy Barrett wanted to sing on the show... though if she did, I can't imagine her only wanting to sing one song, over and over again... 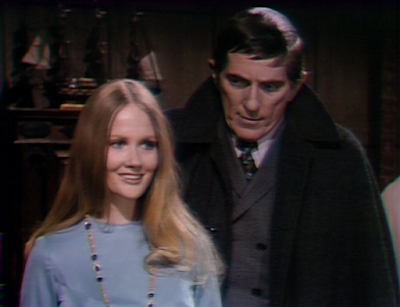 Christine: Well, Quentin had his song, Angelique had her song, and this is the song for Carolyn's incarnations, but my question is, why bring this one back? It had its moment. Why not have Cobert compose an entirely new theme for 1840? Maybe Daphne's song or Gerard's song? I don't relish the thought of having to hear this tune ad nauseam again. The only thing I enjoy about it is how much Nancy Barrett throws herself into it.

John: I could barely recognize the expelled Barnabas doll as the one David had created. So much for his getting back to the playroom. We can only wonder what sort of punishment pirate Gerard has lined up for David!

Christine: At least this doll looked a little bit nicer than the Carolyn/Leticia doll before it was dismantled. I am wondering what the market would be for a whole line of Collins family clothespin dolls. Etsy, here I come! 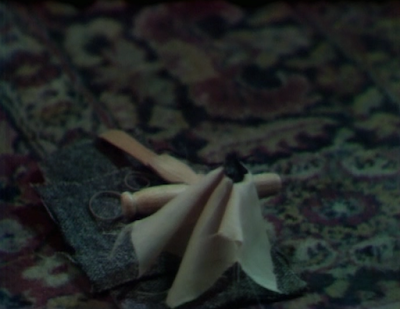