Megan returns to the antique store and tells Carolyn that someone is coming to kill her. Carolyn tries to talk sense into her, but Megan runs upstairs. The door opens, and Carolyn turns to see someone enter the store. 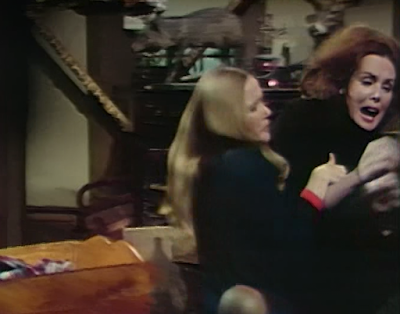 It's Julia. Carolyn is upset, noting that Philip has been gone and Megan thinks someone is trying to kill her. Julia sees the box and asks Carolyn where it came from. She says she doesn't know. She then tells Julia that the baby is very sick. Julia sees the child and says he has a peculiar birthmark. Megan runs downstairs and takes the baby before Julia can examine it. She says they're going away. Carolyn reminds her that she can't leave before Philip returns. Megan regains her composure and says Philip will be back when he's ready. She takes the baby upstairs. 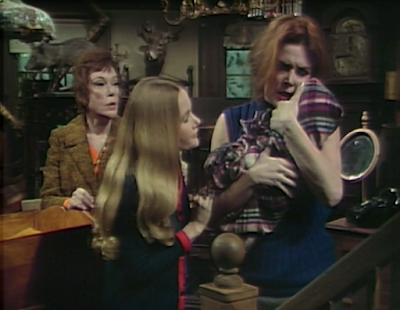 Carolyn asks Julia if she knows what's the matter with Megan. She says that Megan is terrified of something. It could be the result of overwork, or the responsibility of taking care of the baby. Julia picks up the box, and says she saw it at Barnabas' house. Carolyn says Barnabas has sold them lots of things. 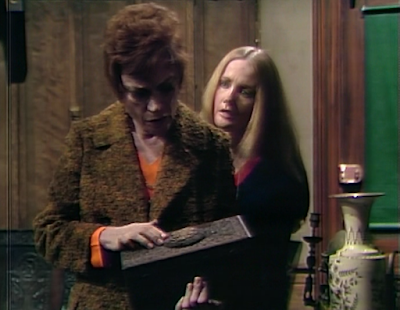 Amy is playing with a baby doll when David comes into the drawing room and locks the door. She says she knows what he's doing. He's surprised to see her. She asks why he lied to Carolyn about the book. He says when he found out is was valuable, he couldn't give it back, so he's going to burn it. Amy tells him that will make things worse. She asks him to give her the book, and they fight over it. The book falls open to a page with the snake logo seen on the altar. David is transfixed by it. Amy says it's wrong to burn it, and he says that he won't. He tells her to stand guard at the door so he can read the book. She does as he asks, and he sits down and begins reading from the book. 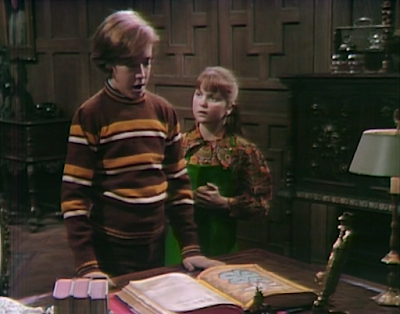 Megan comes downstairs and tells Carolyn she took a nap. She apologizes for her rudeness earlier. Someone phones about the Tate painting, and Carolyn invites them to come to Collinwood to see Julia about it.

Julia asks David to take a note to Barnabas, and he says that he can't help her. He leaves, saying he has something to do. She looks at her note, which says someone is coming to Collinwood, and it may be Quentin. 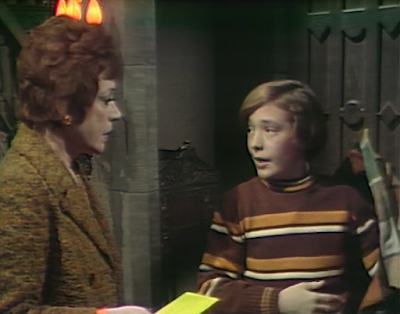 Julia returns to Collinwood and hears Carolyn talking to someone in the drawing room about her Charles Tate painting. Julia barges in and is surprised to see that 'Corey' is a woman. She recognizes her as Amanda from the past. Carolyn says she didn't realize that it was Olivia Corey. Olivia explains that she doesn't let on who she is in a business transaction, as the price always goes up if they know who she is in advance. 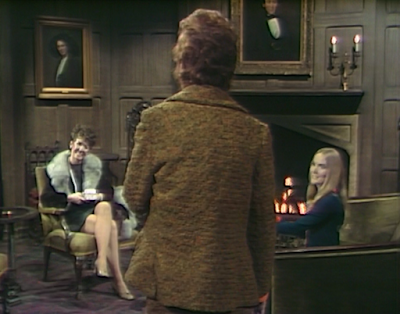 Julia says that she won't be interested in her Tate, as it's not a portrait. She tells Carolyn that many of Tate's portraits resemble Olivia. Olivia says that she is vain, and asks to see the painting. Julia tells her it's a landscape, and shows it to her. She adds that it's not for sale. She's upset, and asks Carolyn to call her a cab. 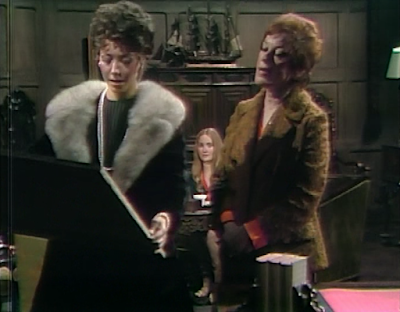 Julia tells her that she's seen her on stage, and she didn't realize her resemblance to Amanda Harris. Olivia tells her that Amanda Harris is her grandmother. Julia asks who her grandfather was, and she says his name was Langley. She says that she's surprised that Julia knew the name of the woman in Tate's paintings. Julia says she must have read it somewhere. Olivia examines the Collins family portraits, and says that she'd love to see more family portraits from the time. Julia says she'll be upset that there are no portraits of Quentin. Olivia says she doesn't know who that is, and when Carolyn comes in to say her cab has arrived, she tells Julia that perhaps they can learn a great deal about art from one another. 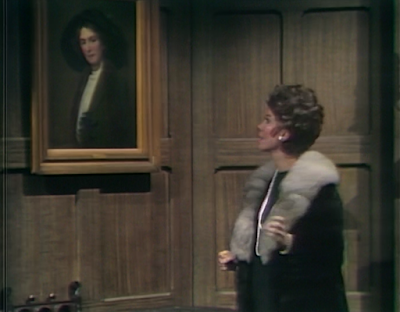 David approaches the altar is the woods, and says that he is one of them now. The altar opens before him, and he steps down into it. The altar closes shut behind him. 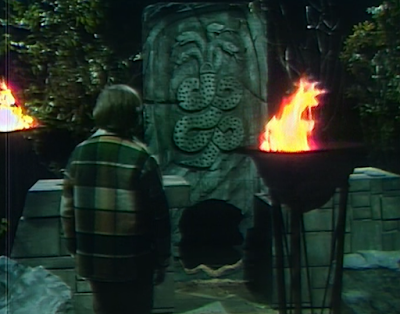 John: Are we sure that Megan isn't related to Quentin's ex-wife? Like her, she's pretty manic, and doesn't do well with children. 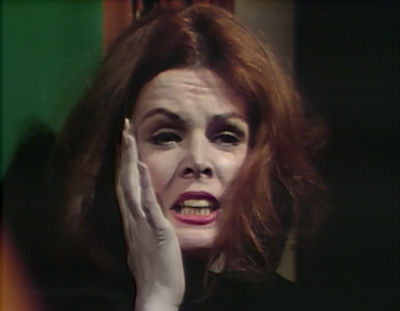 Christine: She sure sounded and acted a lot like Jenny Collins. I liked Megan better when she wasn't all screamy and overdramatic. I wonder if we'll get to see the Leviathan spawn and its interesting birthmark soon. It's rather fitting that the young tyke's cradle is shaped like a coffin.

John: I thought it was great how Julia got right up in Amanda/Olivia's grill and didn't play games with her. She made it very clear that she knows just who she is, and just what she's after. In time, we'll see if she's right. But wouldn't it be even creepier to find out that she hasn't lived the past 100 years, but has had a female child with Quentin who grew up to marry, and she did the same, and so on...

Christine: That. Is. So. Gross. I guess it's not without precedent, since Laura Collins went on to marry and have a child with her grandson, Roger.

John: Nice use of stock lightning footage at the end of the episode. I'm not sure where it originated, but it reminded me of the opening of Creature Features (for those of us who grew up in the Bay Area). Sure enough, it matches! 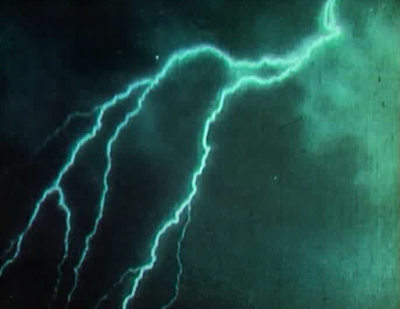 Christine: I was thinking the lightning footage was from Frankenstein when it appeared in Episode 889, though after seeing this intro, it may have been what I was really remembering, which still may have been taken from Frankenstein. Such fond memories. How has David suddenly become a Leviathan after looking at the Naga symbol in the Leviathan book? How come Amy didn't become a Leviathan? It looks like David is going to come out the other side of that stone, though maybe I'll try harder to use my imagination and believe that it's a gateway to Leviathanland. 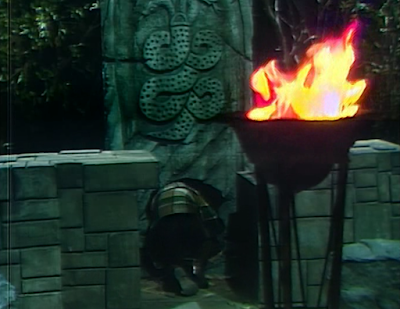 David's reading from the Leviathan text:


And then those who have been hidden so long shall rise and show themselves, and the others will know their time is ended. And the time of the people of the Leviathan will begin. 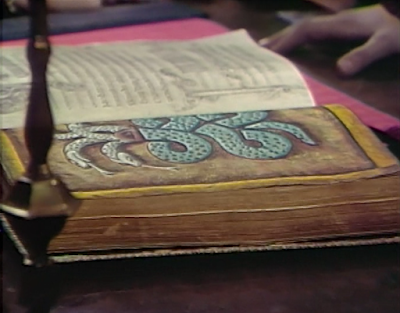