Julia takes Quentin to his room to listen to his song play. He laughs and asks why they're listening to an old song. She accuses him of being Quentin. He asks her why she thinks that.

David wakes in the middle of the night, feeling the presence of Quentin. He hops out of bed.

David goes to the West Wing, where he hears Quentin's music playing. 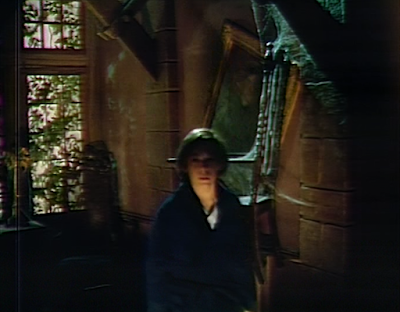 Julia hears someone approaching and turns off the Victrola. She tells Grant to hide. David comes in and asks what she's doing. He says that he sensed that Quentin is back, and heard his music. She says she was looking at paintings. David says she's hiding him, and says Quentin made him do things before, even if he didn't want to. 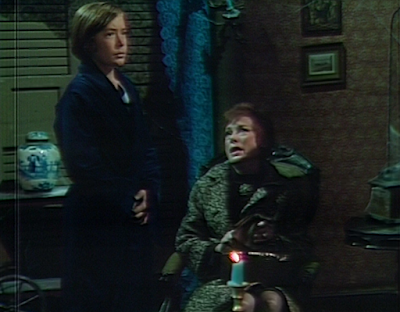 He sees the shoes of a man hiding in the room. He tells her he can't stay, asks her not to play the music, and runs out. Grant asks if everyone knows about Quentin. She confirms that she, Barnabas, and the children are familiar with him. She asks him to stay behind her as they leave the room. 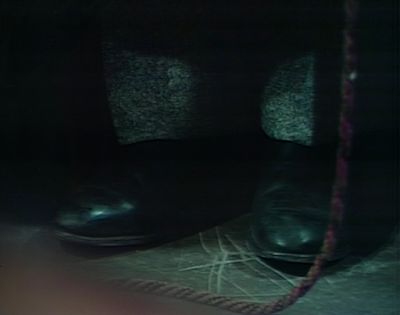 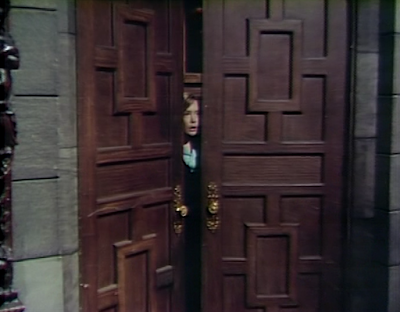 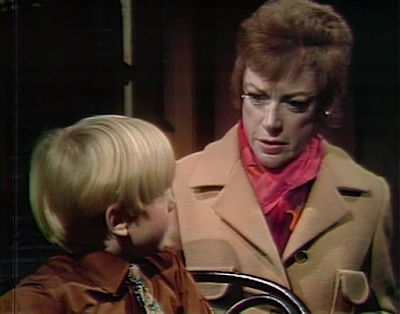 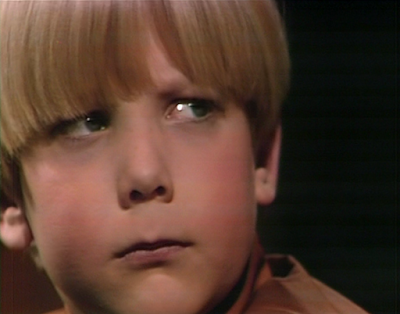 Elizabeth comes in with David and Amy. David introduces her to Alex, who demands to be called Alexander. Elizabeth tells Julia that they can go through storage and look at pictures. Julia says she wanted to see Megan, and Elizabeth says she's at the department store, and they can go now. Julia asks if they can leave the children. Alex yells at Amy for picking up a doll. Julia notices a mark on his wrist. She and Elizabeth leave. 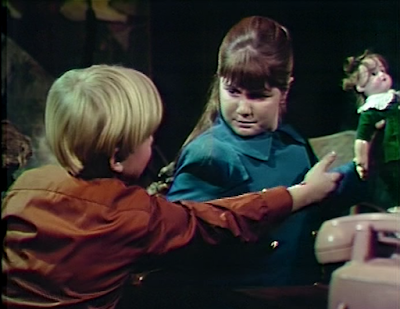 Alex thanks David for coming. Amy picks up a photo of Carolyn as a girl, and says Alex stole it, and has a crush on Carolyn. Alex tells him to get the photo from her now. David tells her to put it down. Amy says it's not his, and he took it without asking. Alex goes to get it and David asks him to let him handle it. Amy asks why he's afraid of someone smaller than him. 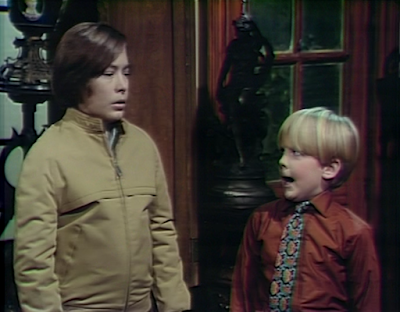 Elizabeth brings Julia into the storage room with the paintings. She says that when they left the shop, Alex looked at her as if he had outsmarted her. Elizabeth says she's thinking of him as an adult. Julia asks Elizabeth not to let the children play with Alex again. She says she feels strongly about it. She goes to look at the paintings and Elizabeth gives her a nasty look. 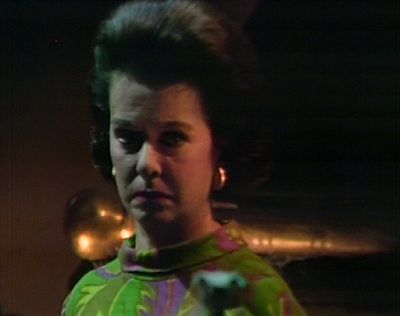 David warns Amy that if she doesn't do what Alex asks, something bad will happen to her. She asks what, and he says he'll send Quentin after her. She says Quentin is gone, and David says he's back. She runs off and David tells Alex to follow her and make sure she doesn't come back for a few minutes. He picks up the phone to make a call. 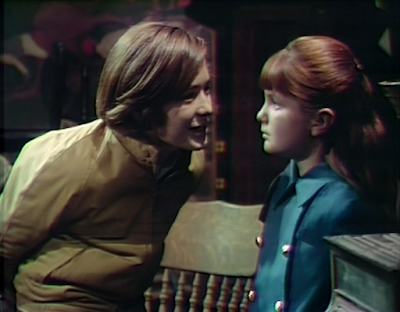 Julia finds a painting that looks like her Tate, signed by Harrison Monroe in 1968. Elizabeth says she got it at a charity auction, and Roger had her put it in storage immediately. Julia says it's inconceivable that two artists work could be so similar. She asks if she can share it with Professor Stokes, and Elizabeth agrees. 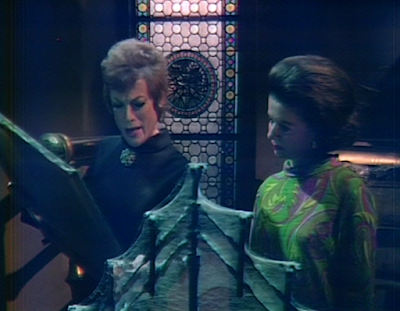 David and Alex have a book labeled for Grant Douglas. David tells Amy they're going to play hide and seek with Alex. He tells her to close her eyes and start counting. She does as they hide. 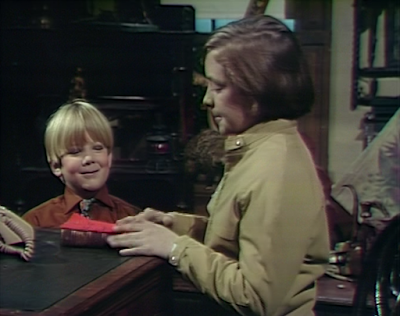 Grant Douglas walks in and Amy sees who she thinks is Quentin. She screams and runs upstairs. David comes out and says she's afraid of strangers. He says he has the book Grant left there. Grant asks if the girl is also a Collins, and he explains that she's a Jennings, but she lives at Collinwood. 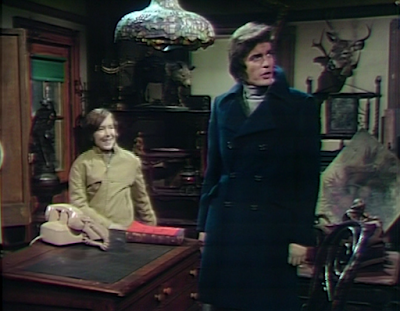 Upstairs, Amy tells David that he's won and begs for him to come out. She hears a deep breathing behind a door. She tells David she won't let him frighten her again. She goes into the room where the breathing is coming from and screams. 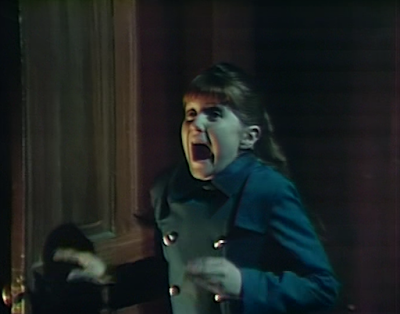 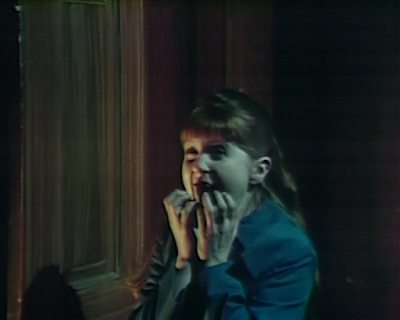 John: Interesting that while the music didn't mean anything to Grant, it got David's attention. It's not clear why he didn't have a reaction similar to Amy's, just accepting that this stranger in town looks exactly like Quentin.

Christine: I'm confused. Does Leviathan David go dormant? He was afraid when he saw Grant's feet in the room with Julia, as David would be, but in the shop he was unfazed to see him.

John: I'm going to take fate into my own hands and continue to refer to Alexander as Alex. He is a nasty little kid, and exerts his control over David. Of course I don't understand why anyone would find it acceptable to leave a kid that age in charge of the antique shop, or to leave two other kids in his care without any adult supervision. Julia should have been more suspicious of Elizabeth's willingness to do just that.

Christine: I love how Elizabeth says they'll be perfectly alright unattended right after they got into a fight. The Leviathan kid sure knows how to dress for success. That's a pretty groovy tie he's sporting. A sure sign that the 60s are coming to an end. 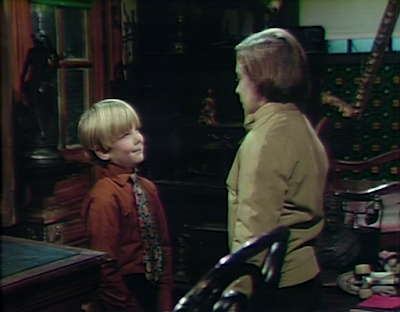 John: Talk about a perfectly timed plot! David manages to contact Grant and get him to come to the store just as Amy opens her eyes...

Christine: What was the point? To punish her for not giving up the kid Carolyn photo? Or was it to force her upstairs where the Leviathan child could make her go out of her mind by revealing his true form? Why does he want to keep the photo of Carolyn at his age? He's bound to reach her current age within the next few weeks.