Elizabeth tells Paul she wants him to come back to Collinwood. She says if he knows about the danger, then he's the one to help them fight it. He's surprised. She says she doesn't know how things will work out for the two if them, but she believes he's concerned about Carolyn. He says she's waiting for him at the train station. She tells him to go get Carolyn and bring her back. He leaves, and she picks up the phone and calls the antique shop. She tells Barnabas that everything will be alright now, and that Paul will be returning to Collinwood with her. He tells her that she has done well. 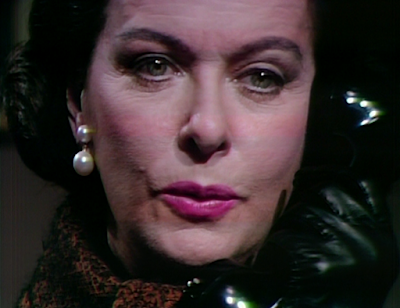 Carolyn can't believe what Paul has told her. She says that her mother has been so bitter. She doesn't know what to believe. She says she has a feeling that they should take the train. Paul says that with her mother on their side, everything will be alright. They watch as the train pulls out of the station. He tells her they're going home. 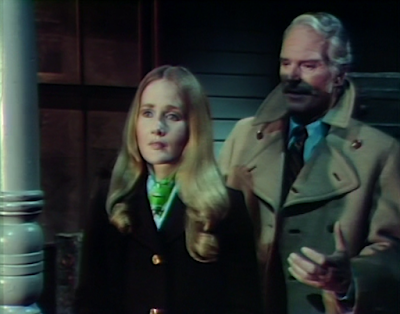 Barnabas is in Quentin's hospital room, and he prepares to strangle him when he remembers that Quentin saved him once, and decides he owes him one chance at life. But only one. 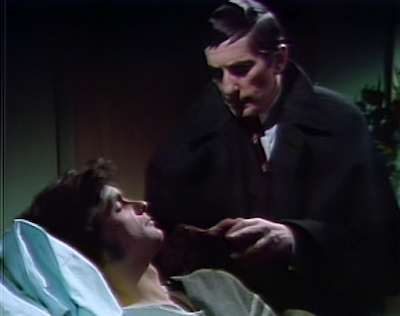 Paul, Carolyn and Elizabeth return to Collinwood. Elizabeth tells Paul they'll put him in the blue room. He sees the portrait of Barnabas in the hall. He says it's good to be back. He hugs Carolyn, and tells Elizabeth that he'll be different this time. They have a toast, and Carolyn goes to take his bags upstairs. 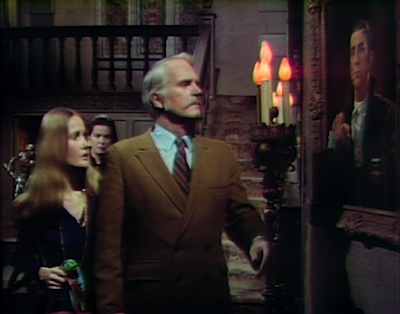 Paul closes the door to the drawing room, and asks Elizabeth what they should do to fight them. He says he doesn't know where to start. Elizabeth says they could do nothing. He says she doesn't know what they're liable to do next. He says she promised she would help him fight Barnabas. She reminds him he's in Collinwood, and suggests that he be content with that. He realizes that she doesn't believe him. He asks why she brought him back. She says that everything Carolyn told him is true. He's not well. She says she wants to help him. He says that he knows one thing—Barnabas is an evil man, and the people in the antique shop are in on it. 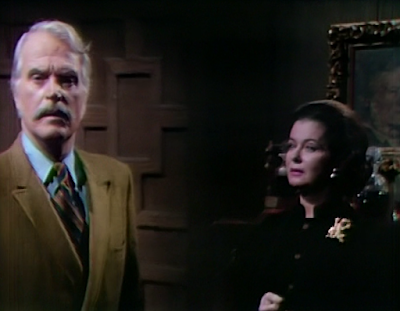 Outside the drawing room, Julia hears their conversation.

Paul goes to call the police. Elizabeth asks what he's going to tell them. He agrees they'll never believe him. Paul hears something outside the door and pulls them open. He finds Julia and he accuses her of being one of them. Elizabeth says she is not, and demands that he apologize to her. He does. Julia says she should apologize for eavesdropping. She says she couldn't help hearing. Carolyn comes in she asks Julia if she can go with her to the hospital. Elizabeth says it will be good to give her father some rest. Paul says that none of them will convince them that he's sick, and he stomps off. 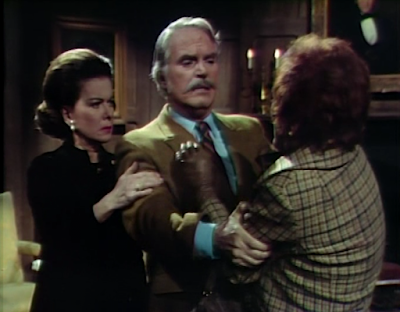 Barnabas stands over Quentin, and calls his name. He tosses and turns, and then opens his eyes. He sees Barnabas standing over him. Barnabas says he knew they'd see each other again. 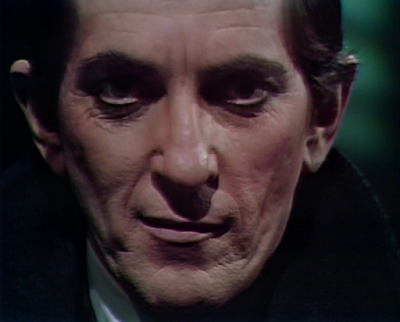 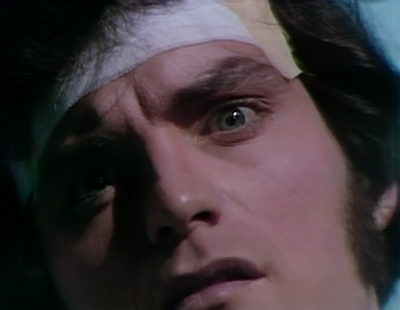 Paul comes downstairs and stares at the portrait of Barnabas. Elizabeth comes in and asks if he'd like her to have it taken down. He says it will serve as a reminder that he needs evidence. He assures her that he's not mad. 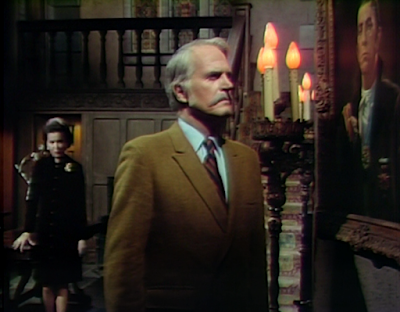 Carolyn and Julia arrive at the hospital and find Barnabas in the room. Carolyn calls him Grant, and he asks her why she called him that. Julia asks if he recognizes her. Carolyn asks why he would, and Carolyn does, too. She says she's a doctor. He says he only knows he's in Collinsport because the man (Barnabas) told him. He says he's not sure what happened to him, and asks if any of them know. Carolyn tells him his name is Grant Douglas. She says they met in an antique shop, and he asked her for a date. He says he was a genius. 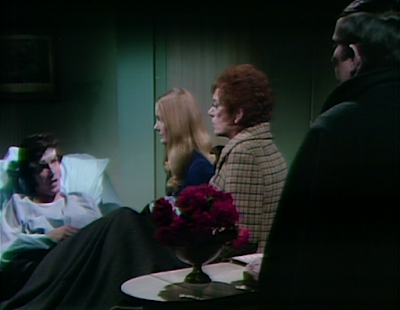 In the hall, Barnabas tells Julia it was stupid to ask if he recognized her. He says it might have given away the fact that he's Quentin in front of Carolyn. Julia accuses him of taking his memory away. Barnabas says the memory loss is because of the car accident. Julia blames Barnabas. She goes back into the room. 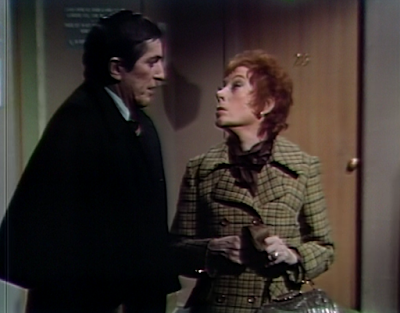 Grant tells Julia and Carolyn that the man called him Quentin Collins, and he asks if either of them know who that is. Carolyn asks Julia why Barnabas would say that. Julia says she'd have to ask Barnabas. Grant asks what's so strange about that. Carolyn says Quentin lived 100 years ago. Grant says that in that case, he can't be Quentin Collins. 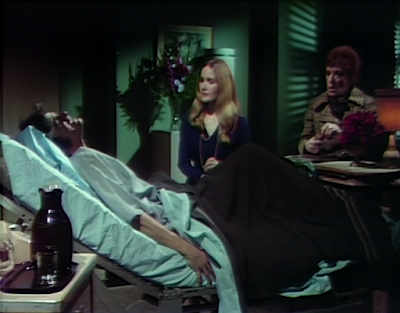 Julia tells Paul she wants something from him. She asks what story he could not tell the police, and asks if he knows why Barnabas is acting in a peculiar fashion. He says that Barnabas is connected with an organization... and then is interrupted by Barnabas. 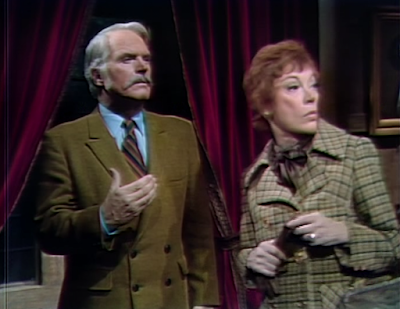 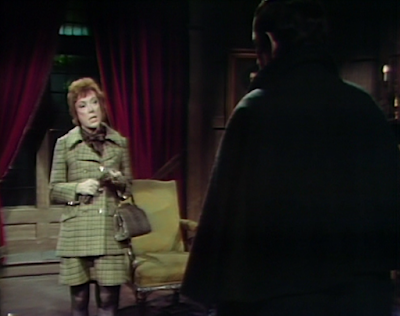 Elizabeth comes in and says that something must be done. She says someone will listen to Paul and believe him. Barnabas says that Paul Stoddard will be taken care of by someone else. 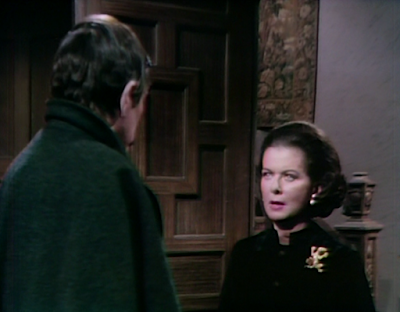 John: Ooh, the plot thickens. Do you think Quentin is playing possum, or that he actually lost his memory in the accident? I can't wait for Carolyn to interrogate Barnabas about why he called him Quentin Collins. And we're still waiting to see if there's a connection between 'Grant' and 'Olivia.' Surely if they were traveling together, she'd be concerned if he were to disappear for a few days...

Christine: I suspected the head injury would lead to the convenience of amnesia in keeping us from knowing if Grant really is Quentin, but I thought it was interesting that Julia suspected Barnabas of wiping his memory, which suggests that she didn't believe the accident was the cause of it. So, either Barnabas is responsible for the memory loss, or Quentin is making it up. Wait until Carolyn finds out she was setting up a date with Chris' grandpa!

John: I had assumed Paul was going to have a real history with the Leviathans, perhaps as an excommunicated member of the organization. I'm now beginning to think that he just had that chance encounter in The Blue Whale 20 years ago, and he never discovered just who he was dealing with.

Christine: Yes, it was nice the way that was set up, and great to see Paul and Julia team up against Leviathan Barnabas.

John: I wonder when and how Barnabas managed to brainwash Elizabeth. Since he's gotten to her, and David is already under their spell, can Carolyn and Roger be far behind?

Christine: If they can turn folks on to the Leviathan way so easily, why not just make them all Leviathan agents? I wonder who Barnabas is planning to set up to take care of Paul Stoddard. Will Carolyn end up losing her father now that she's just found him? 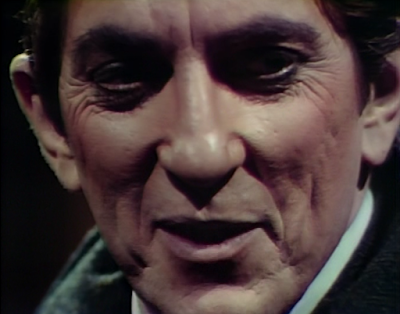