Elizabeth comes in to the antique shop to see Megan. Carolyn is working, and says that they're gone for the day. She asks her mother what's wrong. She tells Carolyn she doesn't want her coming to the antique shop any more. Carolyn says she can't request that with no reason. She says that whatever is wrong with David has to do with the shop. She says she saw him in the shop last night, and he denied it. Carolyn laughs, and says that she knows what happened, because Megan explained it to her before leaving. She says David stole the missing book, and he snuck back in last night to return it. She says Megan found the book that morning. 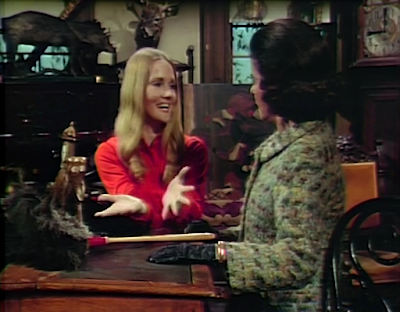 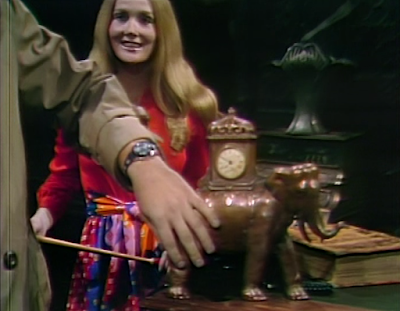 David looks at the real book in his room. He reads from it. His aunt walks in and sees him with the book. She says she knows he stole to book from the shop. He doesn't deny it. He says he returned it last night. She asks him about the book he's reading from now, and asks to have it. 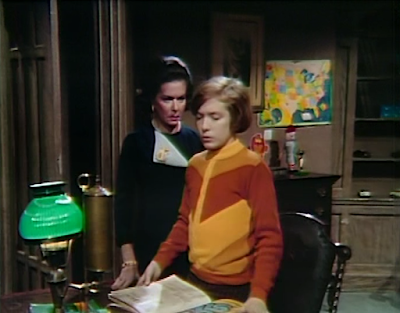 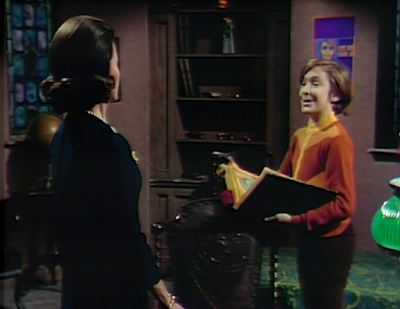 She says he has an answer for everything, so things will have to wait until she can show Megan the antique book he was reading. He says she's just as bad as his father. She says he cannot leave the grounds without her permission. He asks why they can't have any fun any more, and she assures him that they will. 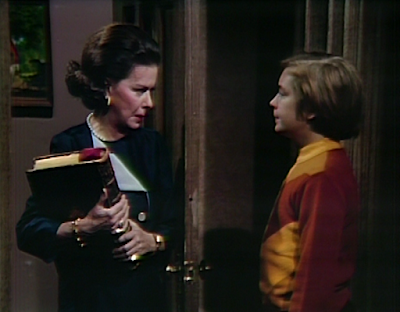 Barnabas goes to the antique shop. Carolyn is reading from a book of poetry. She says that she met the most fascinating man in the shop. She says she felt as if she's known the man her entire life. She says that she didn't believe it when Barnabas said she had yet to meet her true love. He says he wasn't expecting it to happen quite so quickly. She says it did happen. He asks if the man was as taken with her as she was with him. She says he's coming back tonight at 10. He says he hopes the man doesn't disappoint her on his second visit. 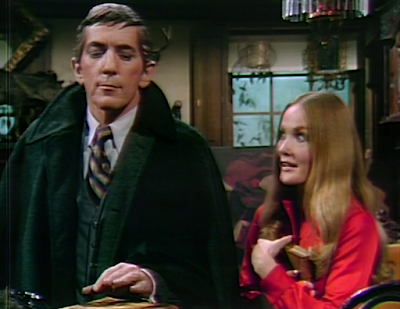 David throws coins into a cup. Barnabas asks how his game is going. David tells Barnabas that his aunt thinks the book he had in his room is the one he stole from the antique store. 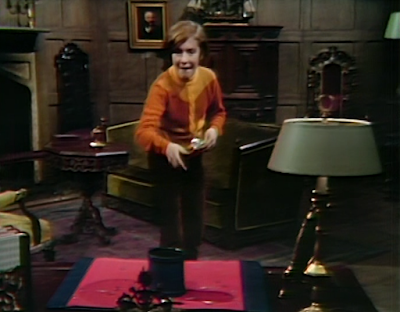 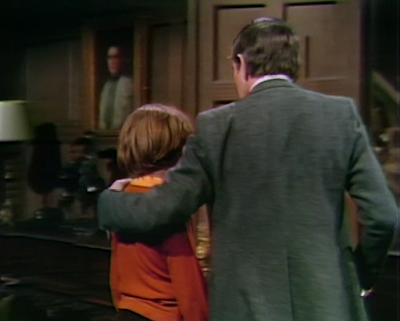 Barnabas comes into the drawing room and finds Elizabeth looking at a strange book. She says David stole it from the antique shop. Barnabas doesn't recognize the languages. She says she can't recognize it, but it appears to be a devotional book, because it has repeated passages. Barnabas says that the book is valuable. He offers to take it to the antique store. She thanks him, and offers him a drink. He declines, and asks her to try relaxing without the drink. 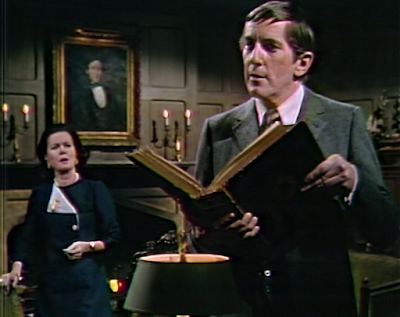 He asks her to go upstairs and lie down. He says if she forces the things that trouble her out of her mind, she'll have a good sleep. She says she will try, and he promises her pleasant dreams. She goes upstairs and he takes the book, smiling with glee. 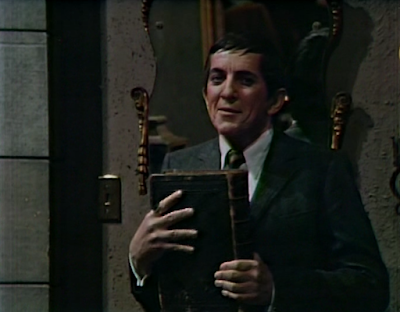 Elizabeth dreams of a kaleidoscope. She sees David calling her to join him to have fun in a funhouse. She asks what she's supposed to do, and he tells her to look in the mirrors to see all the people she really is. He tells her to relax and laugh. She looks into a funhouse mirror and sees herself and a number of clowns. She goes from mirror to mirror. She sees nothing in the last mirror, until Barnabas appears. They all laugh. She sits up in bed. 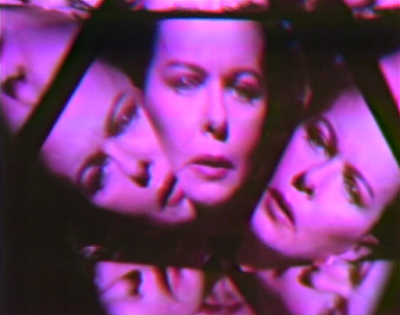 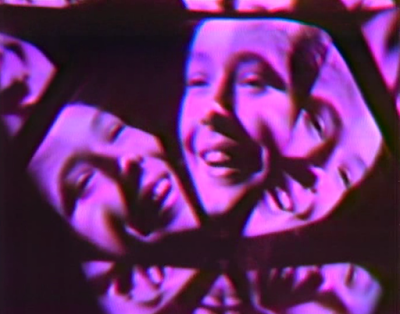 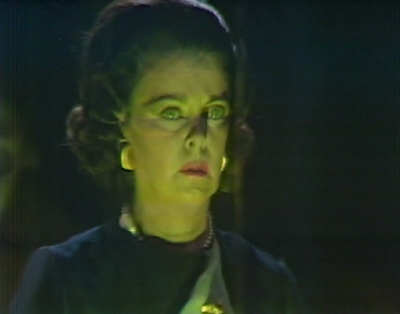 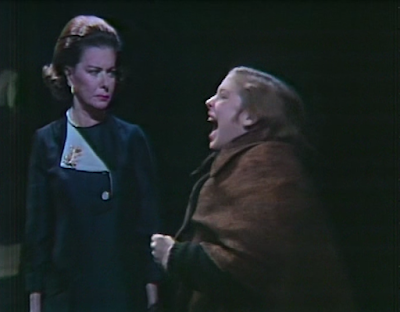 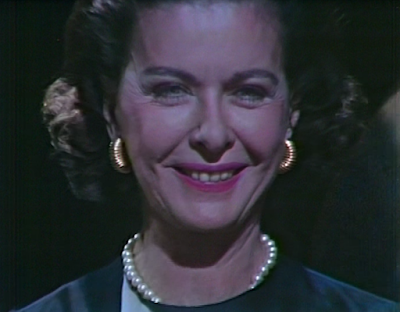 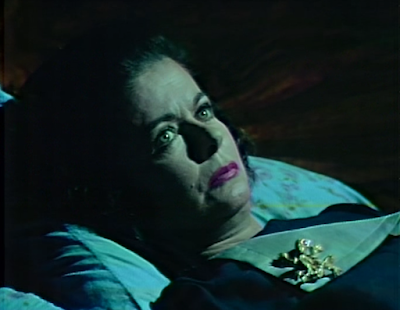 Watch man appears outside the antique shop. A car comes out of nowhere and hits him. Carolyn comes outside and sees the man on the sidewalk. Barnabas comes forward and says the man walked out in front of him, and he couldn't see him until it was too late. Barnabas turns the man over and Carolyn says it's the man who was coming to meet her. 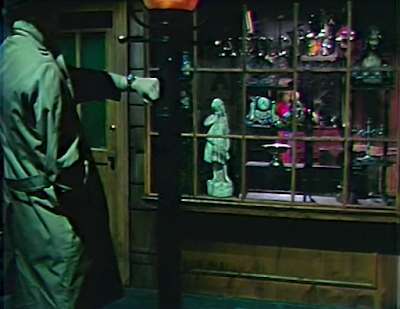 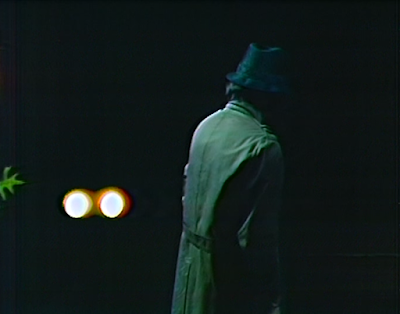 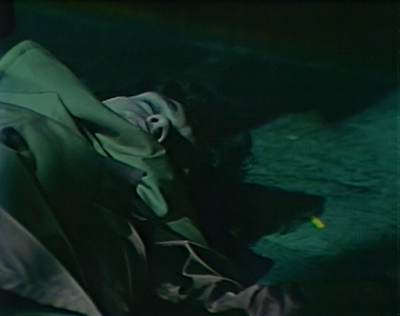 John: How exactly does Carolyn (or Megan) know the detail about David stealing the book because he tore a page and got frightened? As far as we know, Amy was the only one he told.

Christine: I assumed Leviathan David filled Megan in on human David's shenanigans with the book, and she told Carolyn as a way to explain away Leviathan David's late night trip to the antique shop.

John: David doesn't understand why his aunt thinks he and Megan are liars. The mere fact that they lie to her not withstanding.

Christine: The Leviathans are a rather simple minded, mendacious sort of creatures.

John: So was Barnabas riding a motorcycle? How else did he manage to hit the man standing between the store and a lamp post? And why bother being so coy about the man's identity, since the credits out him as David Selby. Welcome to Collinwood 1969, Quentin Collins! 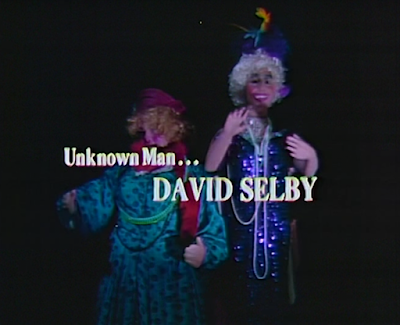 Christine: I couldn't quite figure out how he got hit standing right next to the storefront and lamppost either, or how Barnabas thought he could get away with telling Carolyn that the man jumped out in front of him, when he was clearly on the sidewalk. So, have you nothing to say about the Electric Kool Aid acid dream sequence? David as a crazed, cackling fat man, Elizabeth's unsettling smile; and the trippy motorized clownish figures were truly the stuff of nightmares. 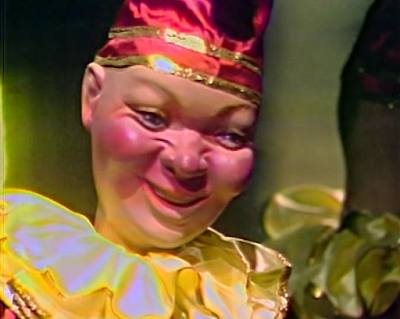 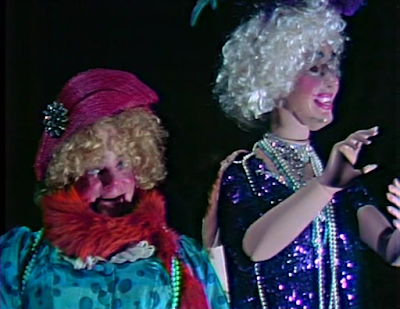 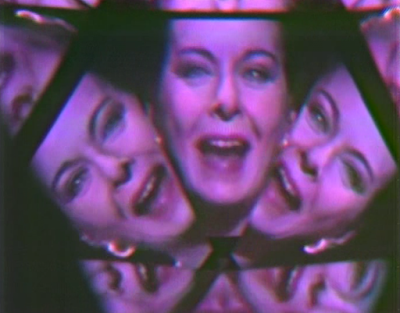 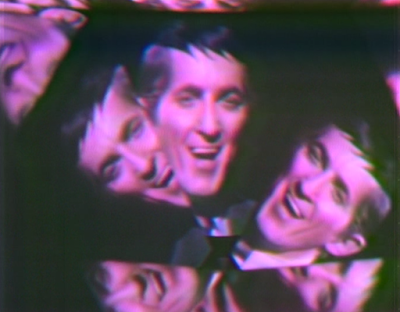 Today's Leviathan quote: "And the enemy shall be overcome, one by one."