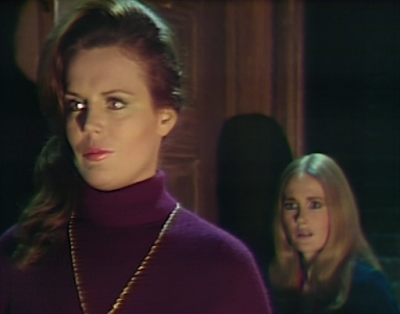 Someone stares into the window of the antique shop when Carolyn and Megan come downstairs. Megan apologizes for being abrupt as she calls the number Carolyn left for her. She says that it's busy. She then spots the person outside, and says he's just walking by. Carolyn says he's watching them, and goes to the window. The man runs away. The lights go on and off in the antique shop, and Carolyn asks what's happening. 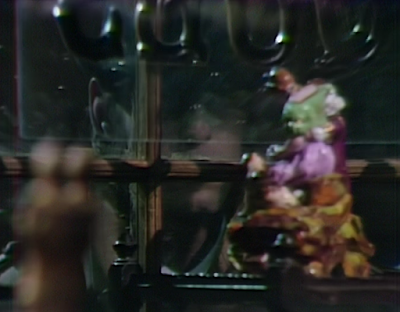 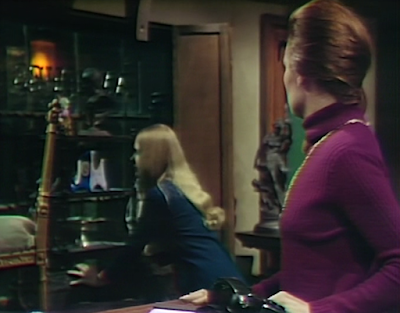 David wakes up and watches as the book on his desk opens on its own. He picks it up and reads a passage. His aunt knocks on the door and he hides the book before letting her in. 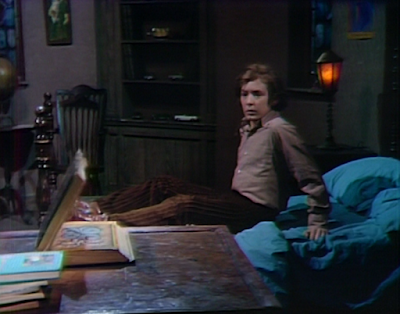 She asks who he was talking to, and he says he was reading his homework aloud. She asks if the window is open, because it's so cold in his room. She asks him what's wrong, and he mentions that her husband is back in town. He says he saw her with Carolyn. She asks how he knew, and he says that he hears things. She says they have to do something about getting him friends of his own age, and storms out of his room. He gathers up what little cash he has saved up. 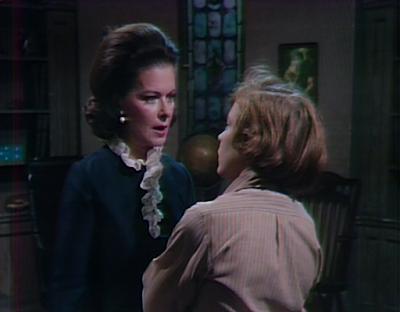 Elizabeth is on the phone with Paul. He threatens that she'll lose Carolyn if she hangs up on him. He tells her that he knows what must be done to save Carolyn from him. He says that's why he wants to see her. She agrees to meet him at the hotel. After she hangs up, Carolyn comes in and asks if she was speaking to her father. She tells Carolyn to leave her alone, and leaves the house. 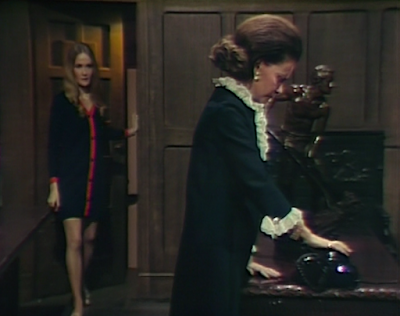 David finds Carolyn in the drawing room. She says he should be in bed, and he adds, or working on his schoolwork. He says he wants to read the paper. She makes fun of him, asking what he reads first, and he says the financial section. He tells her that sometimes he wishes he was an orphan, because fathers do get impossible sometimes. He tears a page out of the newspaper and says he's making his Christmas list. 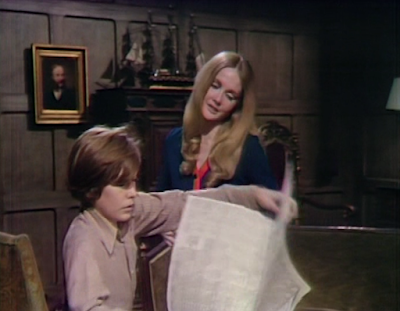 Carolyn leaves him, and he sneaks out of the house. After he does, a stranger sneaks into Collinwood. He straightens the portrait of Barnabas. He then goes into the drawing room and when Carolyn comes looking for David, he hides behind a curtain. She shuts off the lights and heads upstairs. The man comes out from behind the curtain and leaves the house. 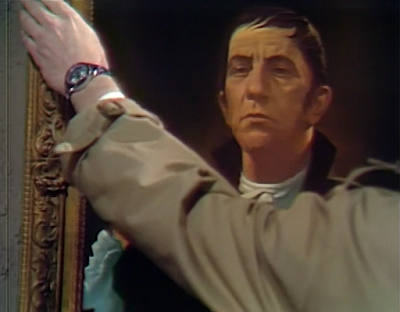 Paul offers Elizabeth a brandy. He says it's her favorite, and she says it was, 20 years ago. He asks if she suspects everything he says, and she says yes. He tells her he wants to be sincere. He says only she can save Carolyn. He tells her to get her out of Collinsport as soon as possible. She asks why. He says she must take her on a cruise around the world, but to tell no one. She laughs at him. She mocks him for suggesting they secretly go around the world, and tells him she won't do anything unless she's told why. 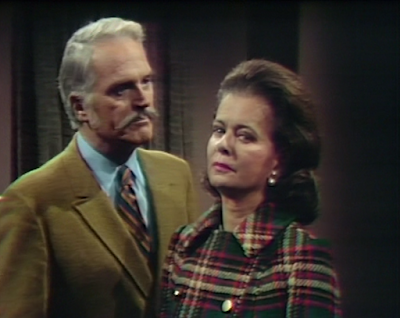 He says she won't believe him. He says she knows what he's capable of. He says it happened on the night he left Collinwood 20 years ago. The phone starts to ring. He doesn't answer it. She does, despite his telling her not to. She says she heard breathing, but they didn't say anything. She says that if anyone should leave Collinsport, it's him. She says she almost believed him, and leaves. He picks up the phone and tells the front desk he wants no further calls put through to his room. 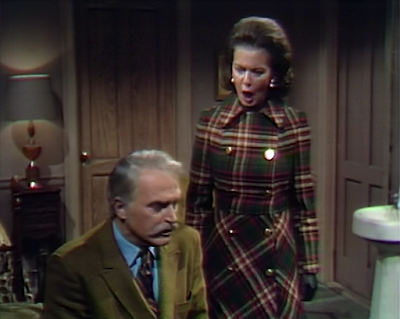 As Elizabeth leaves the Inn, she sees David going into the antique shop.

Megan is in the shop when Elizabeth comes in. She walks around, looking for something. She says she saw David come in. Megan says he's not there. Elizabeth says he was carrying a package that Megan has. She asks if she can look for him. Megan says she can't go upstairs. Elizabeth is insistent, and they go upstairs together. 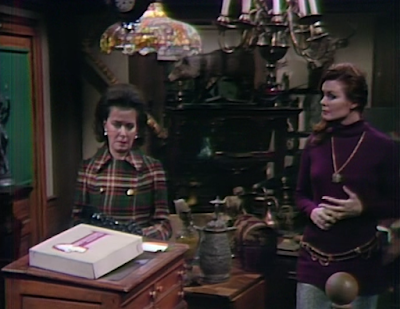 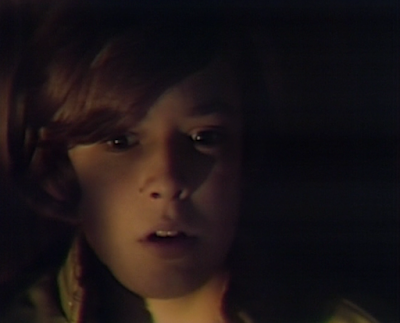 John: So who do you think is the mysterious stranger, and why did they keep focusing on his watch? I'm assuming that it will be the means for the viewers to recognize the person later.

Christine: The watch may be a hint that the owner is a time traveler. Perhaps Petofi finally made it to the future. I thought it was interesting that David mentioned Christmas for the first time ever on Dark Shadows. What do you suppose is on his Christmas list? More robots? It's a wonder they don't put a tree up in the drawing room. Perhaps they keep it in the study.

John: I do think Paul's suggestion that Elizabeth circumnavigate the globe with Carolyn, without telling ANYONE, is a rather preposterous one.

Christine: Paul may not be fully aware that Elizabeth didn't leave the house for the 18 years she thought he was buried in the basement, and that taking such an extended voyage would not be plausible. Granted, he's just a desperate dad who's finally decided he cares about his daughter, and doesn't have much more to offer to in the way of fixing his grave mistake.

John: I wonder if Elizabeth is at risk, as she gets closer to stumbling across the secret of the antique shop... If nothing else, I can't imagine her trusting Megan anymore after she has clearly lied to her about seeing David. 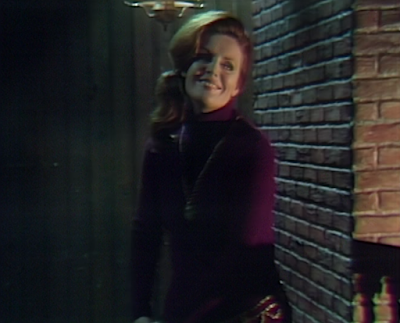 Christine: David certainly has some explaining to do. Perhaps he'll try and convince her that he was working on a Christmas surprise. Speaking of Christmas, if you're looking for a good present, you can get prints of the Cream posters that hang in David's bedroom at Wolfangs.com. 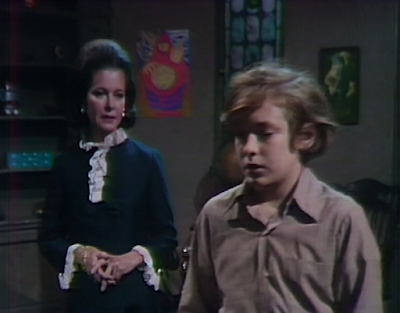