Megan picks up the box and tells Philip it sounds like there's something alive within the box. She tries to open it. Philip opens the envelope with the list of items Barnabas provided, and he finds a key. Megan says they can open the box, and he says if they do so, he feels that they will never be the same. She says they have to open it, and he agrees. He unlocks it and when he lifts the lid, they hear a whistling. She tells him to open it all the way, and he does. 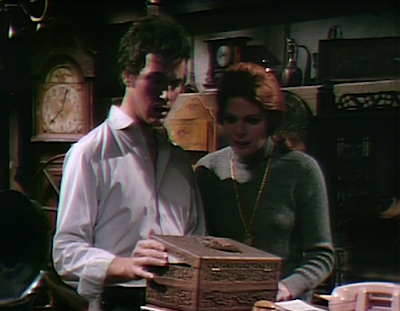 Megan holds a book and asks Philip if he thinks Barnabas knew there was something in the box. She flips through it and says it's not in English. Philip says he'll take it to Barnabas when he goes to see his furniture. Megan reaches into the box and pulls out a scroll. As it is in English, she reads from it. Philip reads part of it as well. Megan says she feels as if she almost knows what it's about. 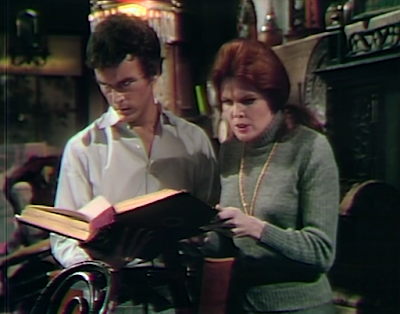 Maggie takes a dress out of a box. Carolyn compliments her on it. Carolyn mentions that she's going to help out at the antique store, and Maggie says she'll pick her up afterwards. 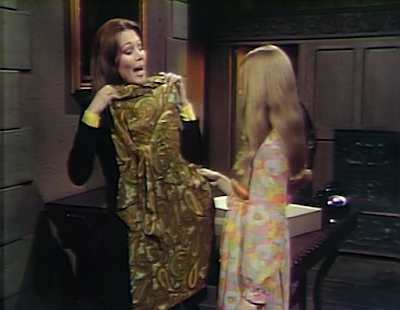 Megan and Philip are sleeping when Megan dreams of Barnabas coming to see her. She says she is different, and Barnabas says it is because she opened the box and read the scroll. He says the book will help her. He says she is the chosen one, and hers is the chosen room. He tells her to close off all the windows so that no light must come in. He tells her to remove all unnecessary furniture, and not allow any non-believers in. She calls him master. He tells her to tell those who ask that her sister has asked to entrust her with this thing. She says she has no sister, and he says she has many, and she will meet them when the time is right. Barnabas tells her to sleep well without dreams, and says that when she awakens, she will not recognize him in the waking world. 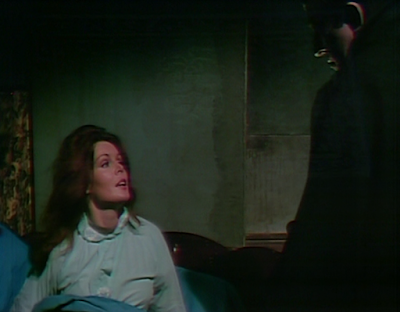 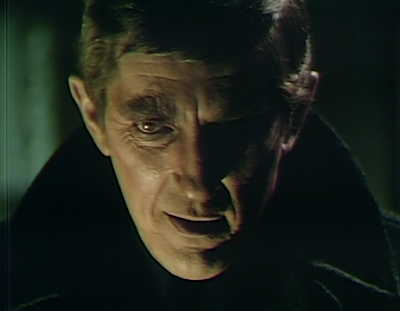 Megan wakes up and looks for Philip, who is no longer in the bed with her. He comes into the room with several boards. He tells her the windows must be closed off so that no light can come in. She asks who told him that, and he says that he doesn't remember, but it must be done without question. She tells him that they had the same dream. 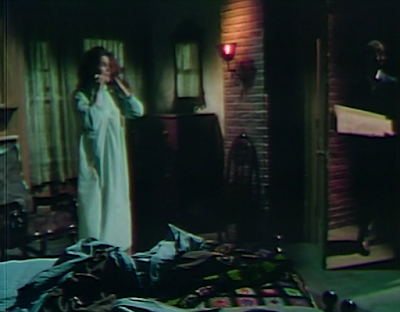 Philip finishes boarding up he windows. The room is empty of furniture. 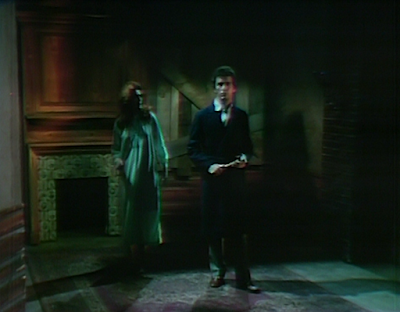 Carolyn dusts things in the antique shop, and comes across the book. She doesn't understand what it is, and continues dusting. The phone rings and Carolyn answers it. She says the item the person is interested in is still available, and that she'll hold it for her. Megan comes downstairs and Carolyn says she sold the cradle. Megan tells her that it's not for sale. Philip comes downstairs and takes the cradle back upstairs. 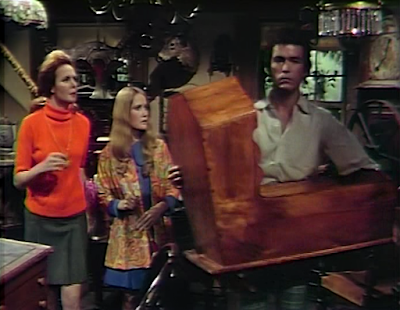 Maggie arrives and asks if Carolyn is finished. She says she has to make a call first. She calls the woman back and tells her that the cradle was spoken for. Maggie asks Carolyn about the book. She says it's new. She tells Maggie that she's not interested in shopping, or going to get a drink. Maggie assures her that a drink at the Blue Whale might change her outlook. 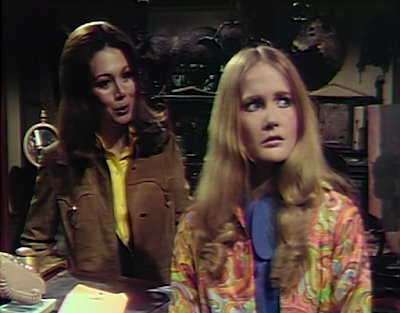 Philip sets the cradle down in the chosen room and says it will soon be time. He says they must close the shop, and tells Megan to tell Carolyn to leave. They leave the room and the empty cradle begins rocking. 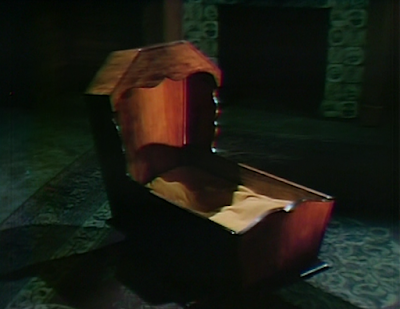 Carolyn is tallying up the day's sales when Megan comes downstairs and tells her that Philip can do it. She says that they're closing. Maggie goes to buy a feather boa, and Megan says she can buy it tomorrow, because she's closing the shop. She rushes them out and locks the door. She and Philip draw the shades. They look upstairs. 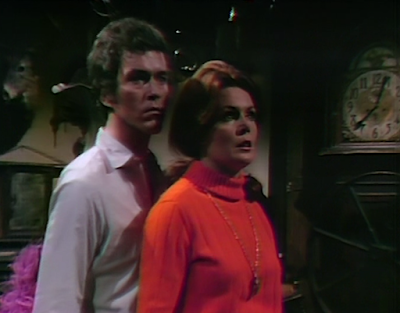 Maggie and Carolyn drink at The Blue Whale. Carolyn says she shouldn't have gone shopping, or come with her for a drink. She says she's going to leave, and Maggie tells her she can't.

Megan asks Philip if it's time, and he says it is. They make their way upstairs. 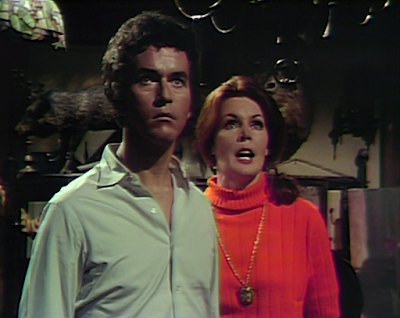 Carolyn says she likes working at the shop, but she felt as if she were in the way today. She says she doesn't think she'll go back. A man enters and Carolyn tells Maggie that she's seen him around town over the past few days. She says she ran into him, and asked him what he wanted, but he didn't answer. He comes to their table and says hello to Maggie. She excuses herself to give them privacy. The man asks if he can sit down, and Carolyn is confused. The man says it is strange to introduce himself to his own daughter, and tells her that he is Paul Stoddard. 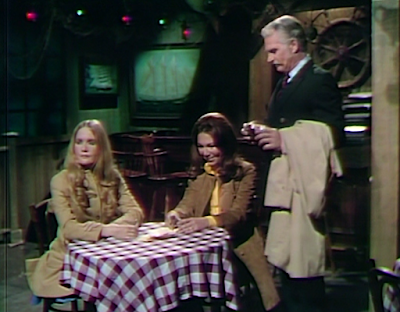 John: I'm sorry, whose idea was it to suggest that a book that is larger than the box in question, was somehow stashed inside the Leviathan's box? And wouldn't it have crushed the scroll that was still in the box? 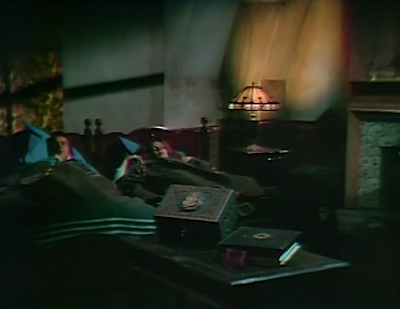 Christine: It must be a truly magical box! Maybe it's like Hermione's purse. The box was a little more musical today, with more of a whistling sound instead of the hissing we heard yesterday. It was just too bad that it made that sound before Philip could actually open it. I believe that was Pansy Faye's boa that Maggie wanted to purchase at the antique shop. 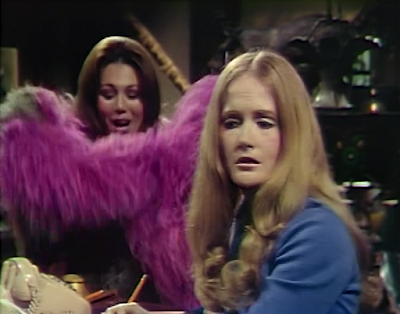 John: So did Dark Shadows decide to put the gothics in the rear-view mirror, and draw upon a more contemporary literary influence in Ira Levin's Rosemary's Baby? 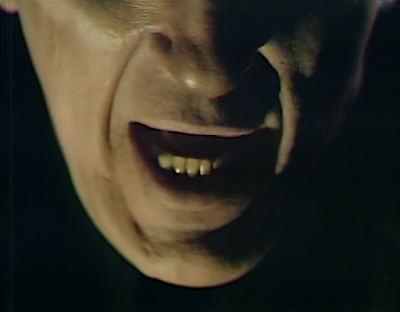 Christine: I think our current storyline is based on H. P. Lovecraft's The Dunwich Horror. So, are we to believe that Megan has been impregnated, or is the stork bringing a baby? Who is the father?

John: Talk about an awkward way to introduce yourself to your daughter. Frankly I'm surprised that Maggie would agree to being involved in such a plot. Did she really think Carolyn would appreciate this? 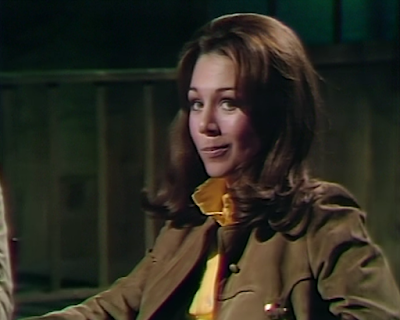 Christine: That certainly is out of character for her. I imagine Paul Stoddard is gifted in the power of persuasion. It was great to be back at the Blue Whale and hear some of Cobert's classic Blue Whale numbers. 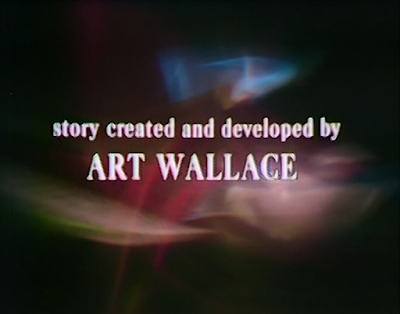