Barnabas wakes from the dream of Oberon to the sound of someone knocking at the door. He realizes that the chosen ones have arrived. He opens the doors and it's the antique dealers. They introduce themselves to Barnabas. He sees the Leviathans logo on her locket. They tell him they run the antique store in town, and Carolyn suggested that they come see him. Barnabas points out that the Naga symbol on her locket is also on the wooden box that he has. Megan asks what's inside, and Barnabas says that he never bothered to open it. Philip offers to buy the box, and Barnabas suggests they go upstairs to see some pieces that he might sell. 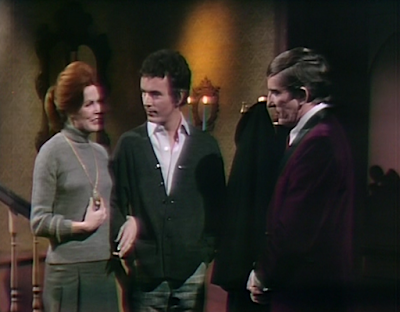 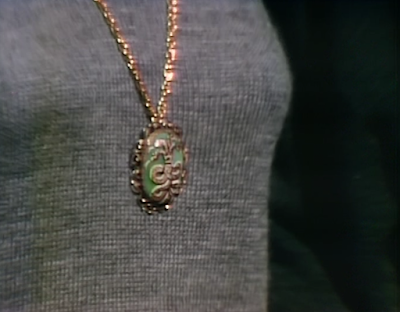 There's another knock at the door as they head upstairs, and Barnabas stays to answer it. It's Elizabeth. She asks how he feels, and thanks him for ridding the house of ghosts. She invites him to dinner. He asks if Carolyn will be there with Chris Jennings. He says he thinks she's seeing too much of him. She explains that she lets Carolyn make her own choices. Barnabas presses her to research where Chris goes away each month. He then says that he's entertaining the people from the antique store, and Elizabeth leaves to return to Collinwood. 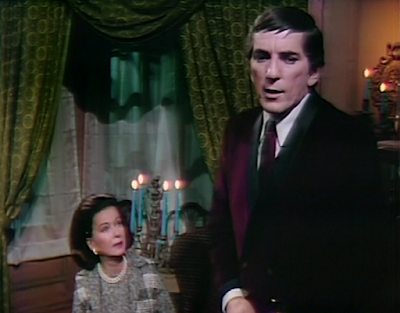 Barnabas tells Philip and Megan that he'll put together a list of things he's willing to sell, and they leave the old house. 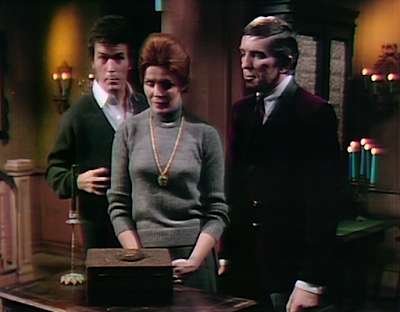 Elizabeth returns to Collinwood as Maggie leaves to go to her house to prepare it for renters. The phone rings, and Paul Stoddard asks for Elizabeth. Maggie hands her the phone, but Paul says nothing, and hangs up. She asks Maggie if she recognized the voice, and she just says that it was a man. 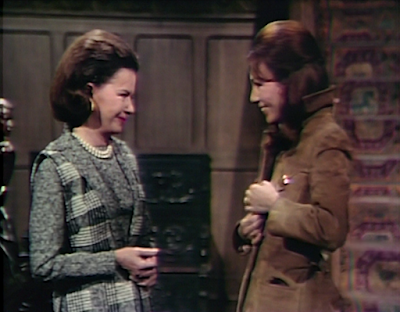 At the antique store, Philip says they need less merchandise and more customers. Megan can't stop thinking of Barnabas' box. Barnabas arrives at the antique store with the box. He tells Megan that it's a present for her. Barnabas says that she must take it. He says the legend states that whoever gives it will get what he wants in return. She asks Philip, and he agrees. He offers to pay something, and Barnabas says he wouldn't know what to ask. Megan says that she will always treasure it. 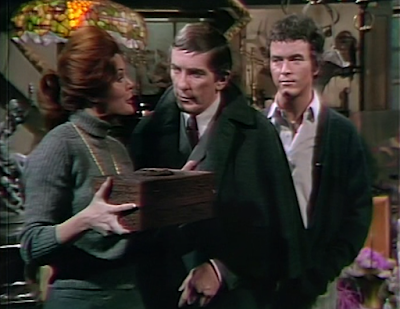 Maggie finishes straightening up the cottage when Paul Stoddard arrives, asking to see Sam Evans.  Maggie tells the man that her father is dead, and invites him in. He expresses his condolences, and says that he and her father were old friends. He says he remembers her as a young girl. He asks if she lives there with her husband. She explains that she lives and works at Collinwood. He asks her who lives at Collinwood, and Maggie lists everyone in the family. He asks her what Carolyn is like, and Maggie says she's not going to answer anymore questions. He asks again about Carolyn, and she describes her as kind and generous. He says she doesn't sound like a true Collins. He says he'll tell her a secret, if he can trust her. 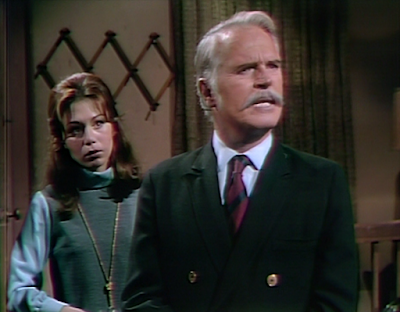 As Barnabas prepares to leave the antique store, Megan promises him they'll learn all about the box. He says he thinks they will see a lot of each other, and exits. Philip wonders why he gave them the box. She says he just wants to be friends, and knows that they'll treasure it. 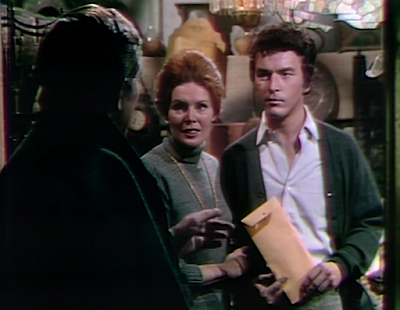 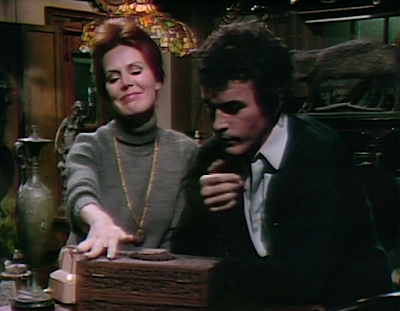 Maggie returns to Collinwood and finds Elizabeth still awake. She asks if Carolyn is home, and when Elizabeth says she's in town, she tells her that she'll talk to her in the morning. Elizabeth tells her the man never called back. 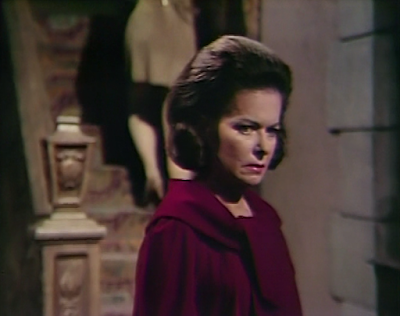 Philip and Megan try to open the box, but are unable. Megan picks it up and tells him it sounds like there's something alive within the box. She continues to try opening it. Philip opens the envelope with the list of items Barnabas provided, and he finds a key. Megan says they can open the box, and he says if they do so, he feels that they will never be the same. She says they have to open it, and he agrees. He unlocks it and when he lifts the lid, they hear something. She tells him to open it all the way, and he does. 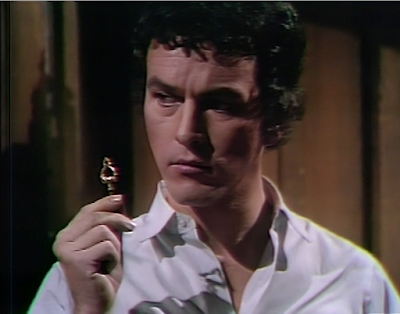 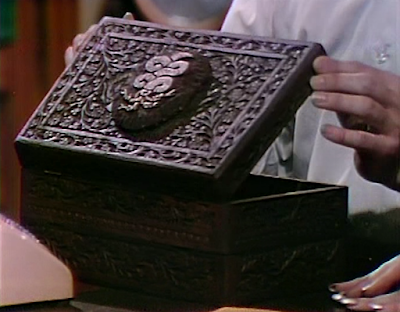 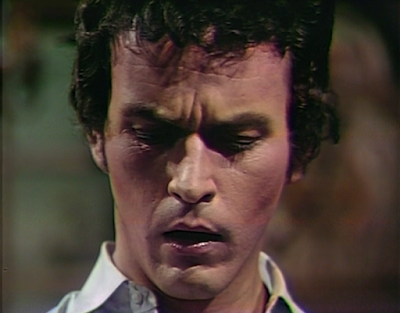 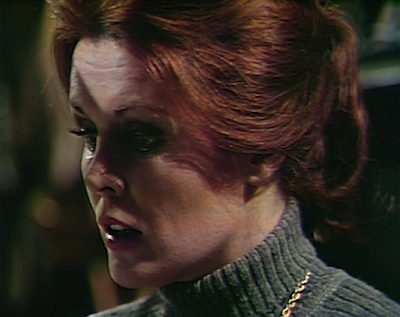 John: If Barnabas thought that Philip and Megan were the rightful recipients of the Leviathan's box, why not just give it to them at the house? I'm curious if whatever is inside the box will come to possess them (hopefully there are two hooded robes waiting inside for them!).

Christine: Perhaps if he had given it to them right away, they would have been more suspicious, and less receptive to opening it and unleashing whatever hissing beast came out of it. So, we finally get confirmation that Barnabas' 1897 mission was successful in banishing the ghosts at Collinwood, and apparently David has survived his ordeal. 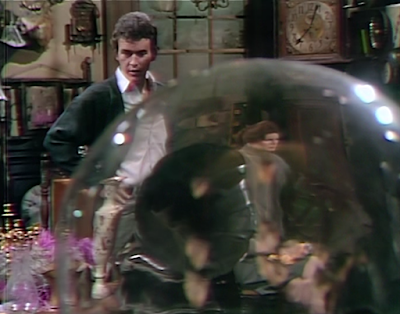 John: I thought it was odd for Elizabeth to point out that Collinwood was no longer haunted. When the past was changed, the house never would have been haunted by his ghost, and anyone in 1969 shouldn't know any better. So how exactly does Elizabeth possess an awareness of this alternate history? Sadly, the writers didn't have Back to the Future at their disposal to help explain time travel basics to them. I also wonder why Paul Stoddard is pussyfooting around Collinsport, rather than coming right out and returning to Collinwood. I get that he hasn't seen Carolyn since she was just a baby, but what's his specific interest in her?

Christine: I think he may be testing the waters, since he allowed his wife and daughter to believe he was dead, before Jason McGuire was forced to come clean in Episode 273 about how he and Paul conspired to extort money from Liz by making her believe she killed her husband. I wonder if he and Sam Evans were really best buds as he claims, or if he's just making that up to get close to an all-too-trusting Maggie. I was really hoping Charles Tate was going to show up to rent Maggie's cottage today. 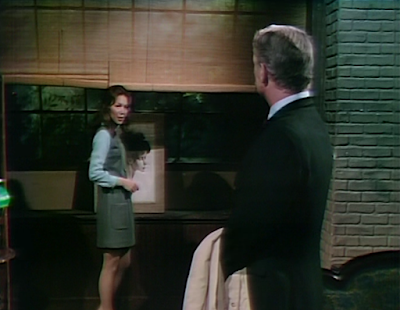 John: Was that a snake I heard in the box?

Christine: Yes. Or maybe someone let the air out of a balloon. Or sprayed a can of hairspray. 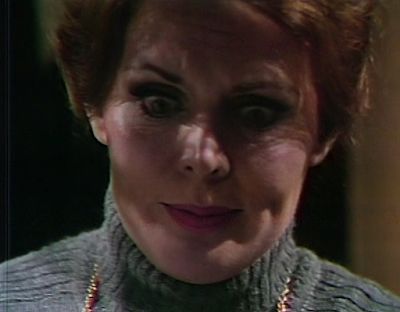 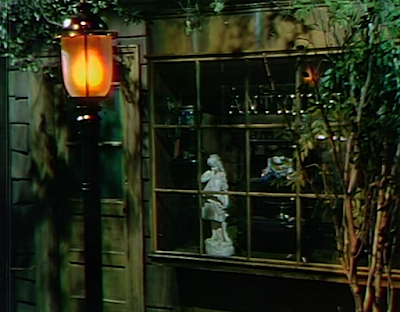