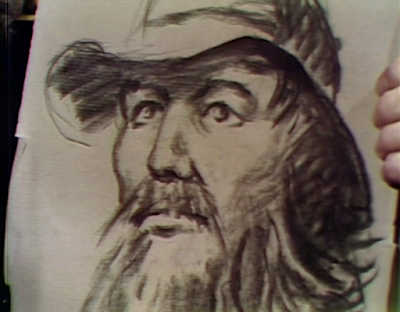 Petofi shows Aristede the sketch of Garth Blackwood. Petofi tells Aristede of Tate's peculiar talent. He says Blackwood will take Aristede with his blessings. Aristede says a picture can't come to life. He then hears the chains, and Petofi says goodbye to Aristede, and tells him that he will miss him. Aristede begs Petofi to protect him. Petofi suggests that he start running. Aristede runs out the back door. 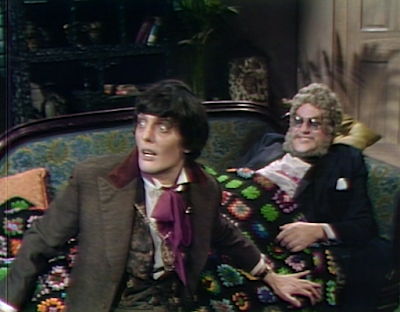 A man comes in the front door carrying chains, saying he's looking for a prisoner who escaped from Dartmoor. Petofi tells him that he's not harboring him. He tells Blackwood that Aristede ran out the back door. 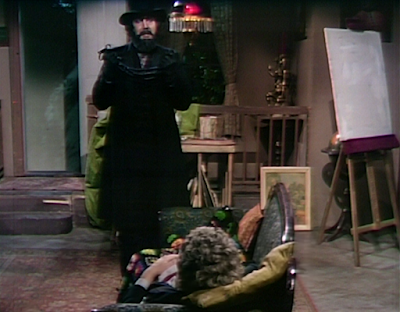 Judith comes downstairs and meets Evan in the drawing room. She asks what he has to report. He says he doesn't have any information yet. He tells her that he's using Tim Shaw, since he has a personal interest in Trask. She says she wants to know where Trask was every time he said he was visiting her. She says she'll meet Evan tomorrow to change her will. He says he doesn't want her to do anything that she might regret later. She says she's wiser now, and warns him that it doesn't pay to trifle with her. 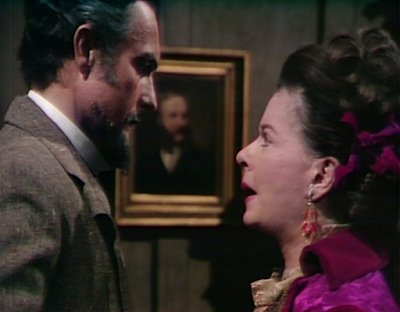 He leaves, and Trask enters. She tells him that she's planning to change her will to ensure all of her money go to charitable causes when she dies. He says she can't, until she suggests that she thought he would appreciate that. She goes upstairs, and Trask leaves in a hurry. 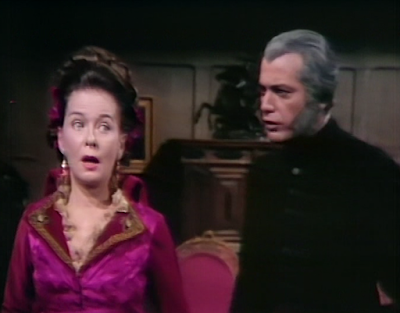 Aristede makes his way through the woods, hearing the chains grow closer.

Trask visits Evan, and says he must dissuade her from changing her will. He says there will be something in it for him. He says he doesn't want to change her mind. He tells Trask that when he goes down, he's not going down with him. Evan tells Trask that his days are numbered. Trask asks him to at least delay her for a few days. Evan asks if the same thing will happen to his second wife as did to his first, and he suggests that it's best if Evan doesn't know. 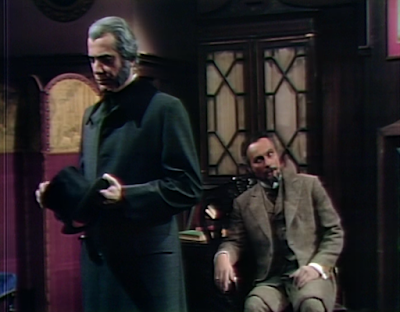 Aristede continues to run through the woods.

Evan warns Trask not to try to stop Judith. There's a knock at the door, and it's Aristede. He apologizes for barging in, but says Petofi sent someone to kill him. Evan says he can't help him, and Trask suggests that Evan could help him. Aristede begs Evan for help. He says if he doesn't help him, his blood will be on Evan's hands. 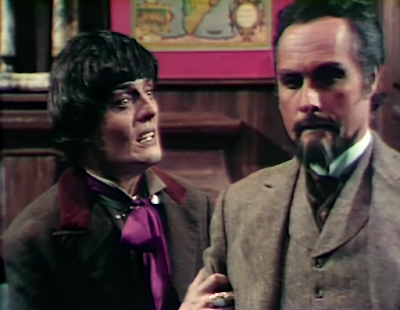 Trask says Evan is only concerned about himself. Aristede asks Trask to help him persuade Evan. Trask says he can offer spiritual help. Evan says whatever he has planned isn't going to happen in his house. Trask asks for privacy to help him, and Evan offers them 15 minutes. He leaves, and Trask says he'll exorcise his demon for a price. Aristede agrees to anything. Trask tells him that he's going to murder someone for him. 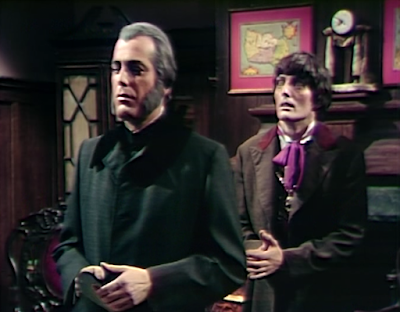 Trask tells Aristede the motive must appear to be robbery. Aristede asks when he gets what he wants. Trask says that will be taken care of as soon as he finishes his job. Evan comes in and tells them their time is up. Trask asks Evan to protect Aristede for an hour. He agrees. Trask leaves. Evan tells Aristede to make himself comfortable. 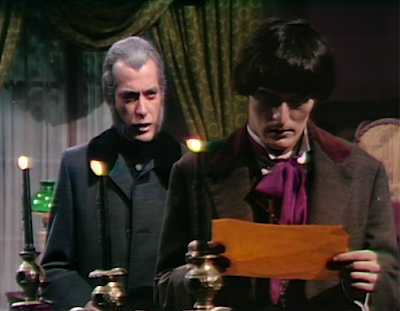 Trask returns to Collinwood and apologizes to Judith for his behavior earlier. 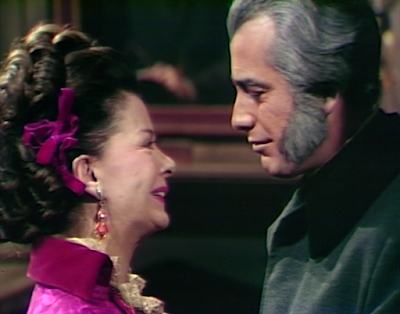 At Evan's house, Aristede hears the chains. Evan asks him what's wrong. Aristede says he's coming to the house. He runs out a side door. Blackwood walks in, and Evan demands to know who he is. He says he is the law, and asks where the prisoner is. He threatens a severe penalty. He says he will search the house. Evan threatens to call the police, and Blackwood strangles him with his chains. Aristede pops back in, and seeing Evan on the floor, runs away again. 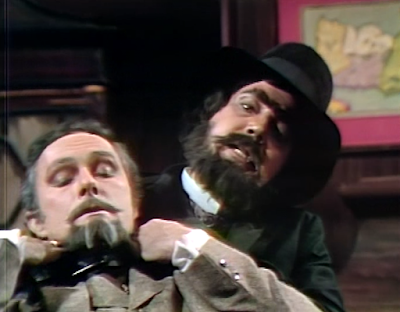 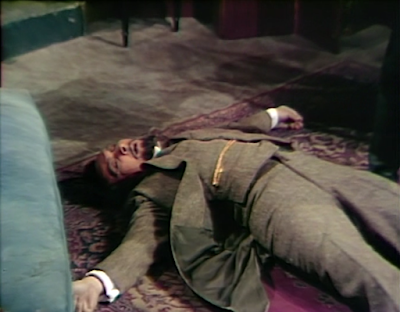 John: I guess I was expecting something different as far as Blackwood is concerned. If he's going to slowly follow folks around Collinsport, he's never going to catch up with his quarry. 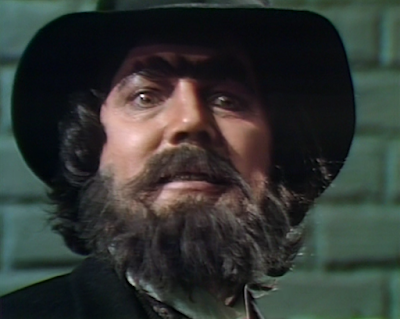 Christine: I suspect the powers of his unibrow may equal that of Petofi's Hand. It's odd that his forehead wasn't quite as furry in the sketch Tate made.

John: Why would anyone care about what happens to Aristede? Particularly Evan. He should just send him on his way to accept his fate.

Christine: With Trask's childishly drawn plan and Aristede's penchant for screwing things up, I have to believe Judith will remain quite safe from their dumb and dumber collaboration. 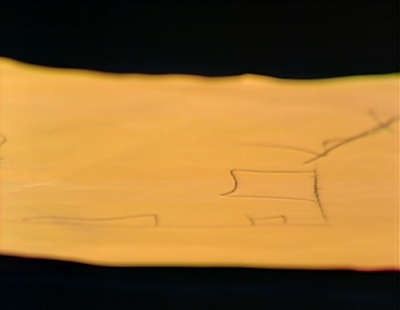 John: While it would be ironic for Evan to get taken out by Blackwood, that almost seems too easy. If he is dead, what does that do as far as Judith's affairs are concerned?

Christine: It depends on whether or not he finished making the requested changes to her will. I love Judith's new strong personality and enjoyed seeing her smirk after telling Trask she intended to leave her money to charity when she dies. I can't wait to see what Tim Shaw, junior detective and jack of all trades, turns up about Trask's actual whereabouts when he claimed he was visiting her at the sanitarium, as well as what other delightful torments Judith has in store for her dear husband. 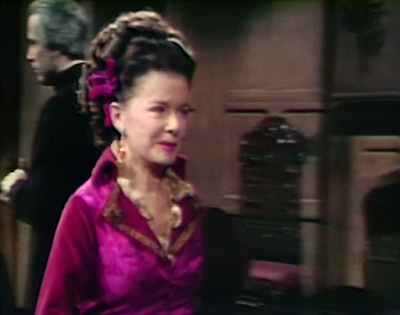 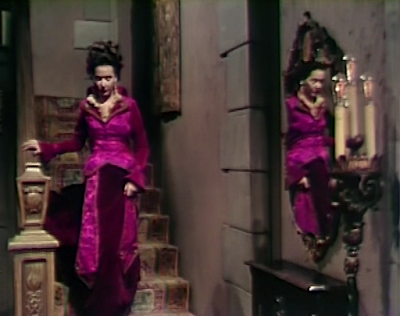