Quentin asks Barnabas what boat he arrived on. Barnabas says the Pride of Jamestown, which arrived at 4:30. Barnabas asks about the location of the portrait of Joshua Collins. Quentin says it's in the West Wing. Barnabas turns and finds himself at the business end of a sword. Quentin says he just returned from England, and there has never been an English branch of the family. He gives Barnabas five minutes to explain who he is and why he is there, or he will run him through. 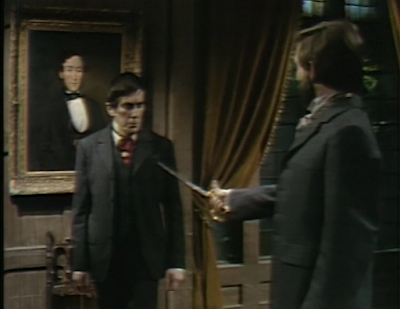 Barnabas says that even though he doesn't know Quentin, he can't believe he's so cold-blooded. Quentin says Barnabas is a fraud, and he wants to know what he's after. Barnabas asks Quentin what he thinks he is after. He assures him that there is an English branch of the family, and perhaps Quentin never heard of them because his reputation may have preceded him. He says any man who would put a sword at another man's throat as soon as they met wouldn't be someone others would be interested in meeting. Judith comes in and tells Quentin to put down the sword. He does, and Barnabas thanks her. He says that perhaps he should leave, but Judith asks him to stay, and tells Quentin to apologize. 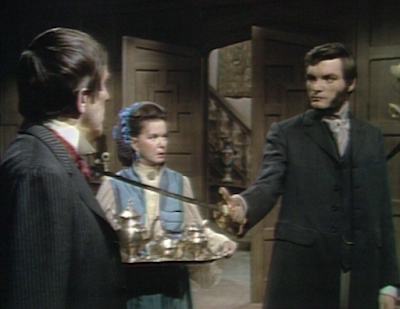 Barnabas says he only seeks friendship. He explains that he and the English branch of the family have all the money they need. Quentin apologizes, and the two men shake hands. Judith asks how long he plans to stay. Barnabas says permanently, once he decides where to invest his money. She asks if he'll stay at Collinwood. He asks if he could stay at the old house, and Judith says the old house is occupied by gypsies, at her grandmother's request. Barnabas asks if he could speak with her, and she says that she's not well, but she'll asks and is sure she'll let him stay. Has asks if he can look at the house, and she says he can. He goes to look at the old house. 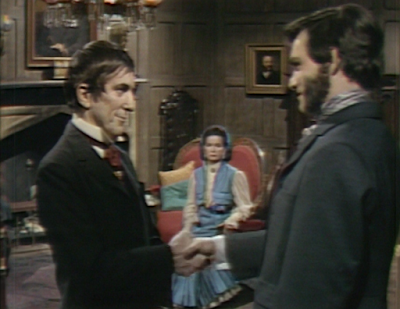 Judith starts to make a phone call to Edward in Boston, but Quentin takes the phone away and hangs it up. She says their grandmother wants Edward to be there. He says that if Edward isn't there, she can tell one of them her secret. 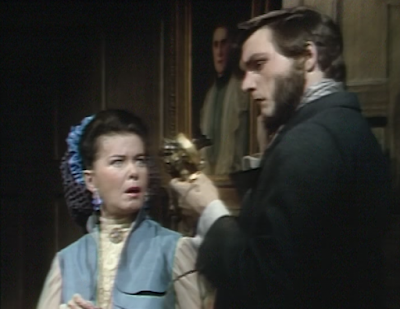 Barnabas makes his way through the woods to the old house. He runs into Beth along the way. She starts to turn, and he tells her not to be afraid. He introduces himself, and explains he just arrived. She asks how she knew her name. He tells her that Judith showed her pictures, including one of her with the children, and she introduced him. He tells her that he'll be spending time in Collinwood, and he looks forward to meeting Jamison, Nora, and the other child. She says there was no other child. Beth excuses herself, and Barnabas thinks that the other child must already be dead and buried on the grounds. 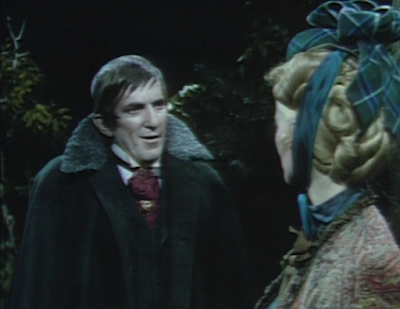 Beth returns home and is interrogated by Quentin. She doesn't answer his questions, and makes her way to her room.

At the docks, Barnabas lurks in the fog. He finds a compact on the ground, and then hears a woman complaining about a drunk man. She runs into Barnabas, who asks if he can help her. She says she lost her compact, and he shows her the one he found. She thanks him, and says she's very grateful. She introduces herself, and he says it would be better if he didn't mention his name. He says he had better leave, but she asks if he can escort her to The Blue Whale first. She fixes her make-up, and notices that she can't see his reflection in her mirror. He approaches her with bared fangs, and leans in to bite her neck. 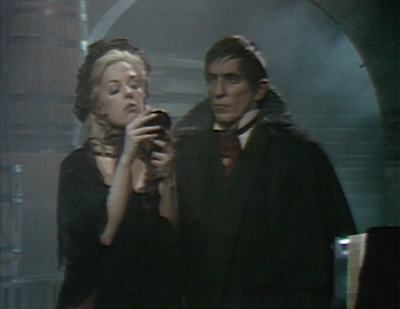 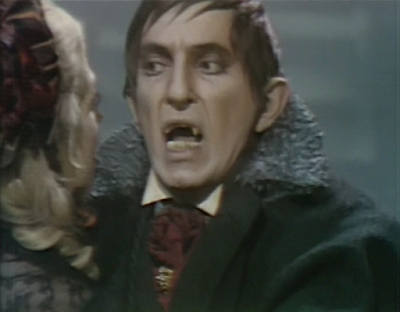 Beth comes out of the kitchen with a tray, and Quentin asks where she's going. She says she's bringing it to Edith, and he offers to do it. She says it's her job. He says he'd like to see Edith, but Judith won't allow it. Beth asks if he thinks she'll reveal the big, dark secret. She says she doesn't want to risk losing her job by helping him. He sees how much food she has, and asks who else it's for. She explains that it's also for Judith. She brings it upstairs. 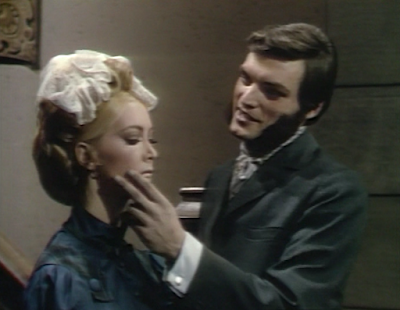 Edith lies in bed, while Judith sits nearby in a chair. She asks if she spoke to Edward, and Judith says she couldn't reach him. Edith tells Judith that she has been very faithful to her, and she will be rewarded. Beth brings in food, and tells Judith that Quentin asked her about all the food. Judith says they must be more careful, and sends her upstairs with the food. She leaves, and Judith brings Edith her consomme. 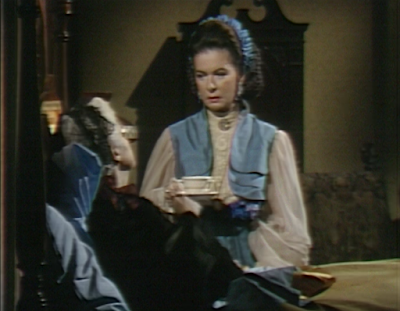 Quentin watches from the shadows as Judith leaves Edith's room. He goes in, and his grandmother asks if it's Edward. He says it is, but she says she recognizes Quentin's voice. He says that she is going to die tonight, but first, she's going to tell him the secret. 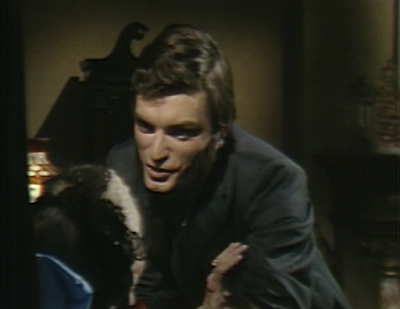 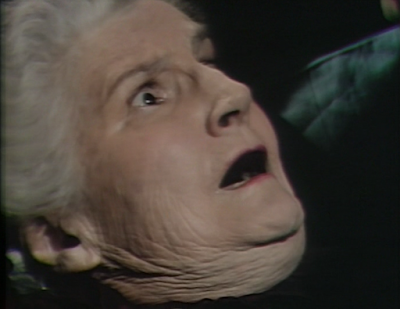 John: Barnabas the junkie goes down to the docks, finds his lunch, but then decides not to partake in it, until the poor girl basically forces herself on him. I must say, when I first heard the voice, I thought it was young Jamison!

Christine: I thought so too! So now we know where the portrait of Jeremiah Collins is. It now hangs where Isaac Collins' portrait can be found in the present day at Collinwood, which is seen behind Barnabas when Quentin threatens him with a sword. I still maintain that Joshua's portrait hangs by the brandy bottle, though hopefully we'll get to learn more about the ancestral portraits in 1897!

John: Hmm... who could Judith and Beth be hiding upstairs and sneaking food to? Edward? The third child Barnabas was looking for? A man-made monster? A werewolf? Inquiring minds want to know!

Christine: And who is the gentleman friend Beth goes to town to see, and why does she have so much money? So many questions!

John: Quentin might earn his monster stripes by killing his grandma. If he does, I can imagine her friend Magda being angry enough to put a curse on him...

Christine: He certainly won't kill her before he finds out about the big secret, and she seems wily enough to know that.

Ah, well it is the nature of a daytime-drama to keep one guessing, wondering, and eventually leaving half the questions unanswered while devising new ones. I definitely loved Judith dealing with Quentin's sword issues while holding a tray. Seems like she just knows his outlandish behaviour and deals with it straight-forwardly.