Judith and Barnabas pay their respects to Edith. She tells Barnabas how Edith raised them when their parents died. She asks Barnabas if she believes in the hereafter. She says she'd be upset if she knew they were fighting over the will that no one can find. She asks Barnabas if he thinks someone stole it, and he admits that he has considered it. She asks him why 'he' would have done it. He refuses to speculate about it. Judith says that maybe Magda was supposed to place it, and then decided to keep it. Barnabas asks why she would have done that. She storms off. 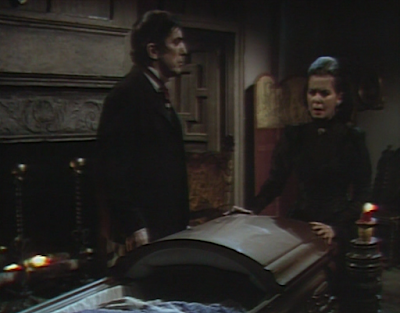 In his room, Quentin calls Evan and says that the gypsy was right—he gets nothing, so they must do something quickly. 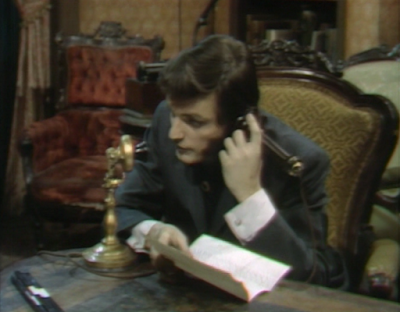 Barnabas knocks on his door, and after he gets off the phone, Quentin lets him in. Quentin asks Barnabas why he's in Collinwood. Barnabas asks if he asked him to his room to explain himself, or because he accused Quentin of stealing the will. In his room, Barnabas is shocked to find I Ching wands. Quentin says he picked them up in the far east, but he knows nothing about them. 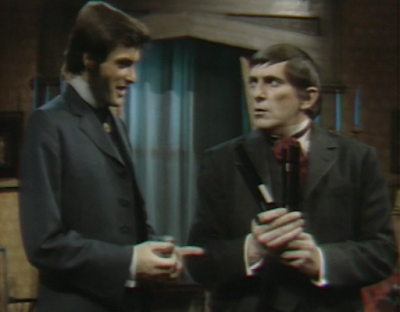 He asks why Barnabas accused him of taking the will. Barnabas tells him that his grandmother won't let him get away with it. Barnabas tells him that he thinks she's still on earth; her spirit lingering to deal with unfinished business. Quentin asks if she's listening to their conversation. Barnabas says she might be, and she will not rest in peace until her will is found. He tells Quentin that he will discover that. 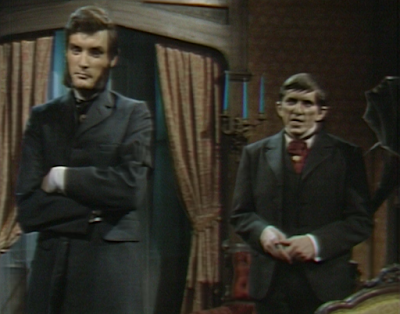 Judith tells Rachel that the children will attend the funeral. Barnabas comes in, and Judith introduces her to Rachel. She asks Barnabas to be a pallbearer at the funeral tomorrow afternoon. He explains that he has business in Bangor. She says Edward will be very upset, and she goes to tell him.

Rachel reviews compositions that Jamison and Nora have written. Barnabas asks her if she's seen the portrait in the old house to which she bears a strong resemblance. Barnabas tells her the story of his ancestor, his uncle, and the duel which left him dead because of the woman. Rachel says that she would love to see the portrait sometime. 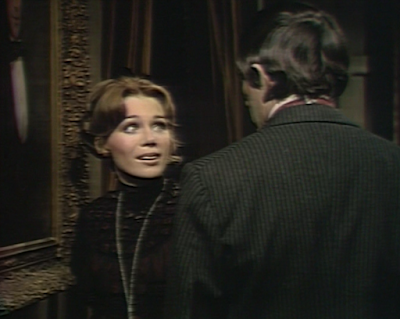 Quentin tells Judith that Edward isn't here. He says that if Barnabas can't make it to the funeral, she should ask Sandor to be a pallbearer. Judith notices a lace glove on the ground. She tells him not to touch it. He picks it up, and she says that glove was downstairs on their grandmother's hand. 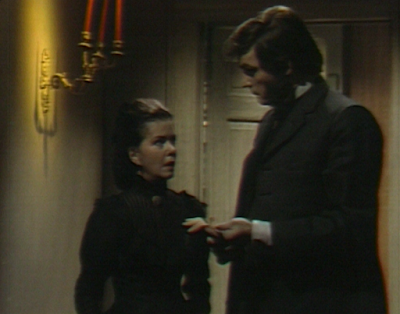 Quentin says he hated playing with Judith because she was a scaredy-cat. They go into the study and find their grandmother not wearing the glove. He says they must remain logical about it. Judith says she's looking for her will. She says her body must not be left alone, and Quentin says that she can stay, but he won't. He gives her the glove and leaves her alone with her grandmother's body. 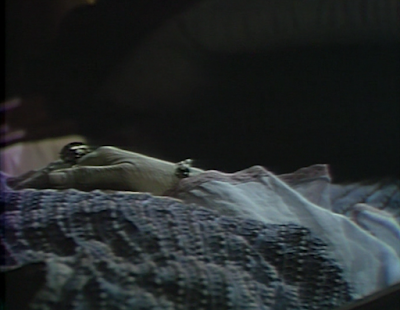 Quentin goes into the drawing room. Beth enters and he says she's just the person he wanted to see. She says she doesn't believe it. He tells her that sometimes at night he thinks of the house, and all the strange occurrences in it, as if it had a curse placed on it. He says no matter how far he has gotten from Collinwood, he seems to belong to it more and more. She says she knows what it's like wanting to get away from some people, places and things. He suggests that they could be more than friends. She says she has to go sit with Judith in the coffin room. He asks her to come to his room later. 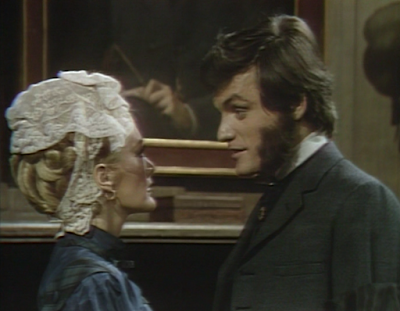 Beth leaves the drawing room and Dirk finds her. He asks if she's ready, and she says she can't go. He says she didn't ask if she could go. He roughly tells her that some day she's really going to make him mad. Quentin comes out and is surprised to see Dirk. Dirk asks him if he wasn't just in his room, as he heard someone in there. Quentin rushes upstairs to check. Dirk asks Beth about tomorrow night, and she says, "we'll see." He asks why she's treating him this way. 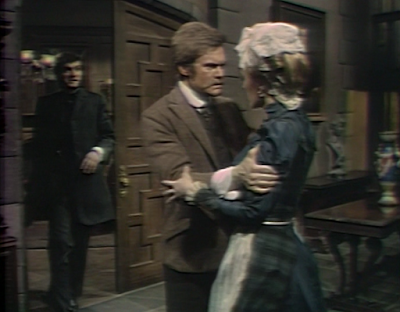 Quentin comes into his room to find it ransacked. 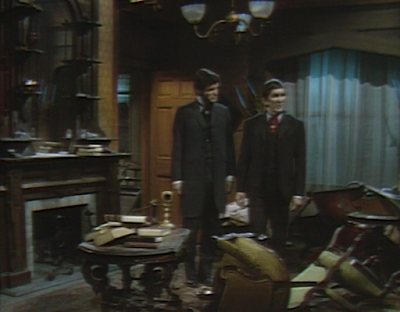 After Barnabas leaves, he begins to straighten things when the lights go out, and he begins to hear a heart beating. He asks who's in the room. He then goes into the hall and calls for Dirk to come up with a lamp. Dirk enters and asks why the lights are out. Quentin asks where the sound of the heartbeat is coming from, and Dirk says he doesn't hear anything. Quentin says to prepare him a carriage so he can get out of town. Dirk says that's not his job; he just oversees the grounds. Quentin says Dirk is lying, and in on it. Dirk tells him not to call him a liar and storms off. 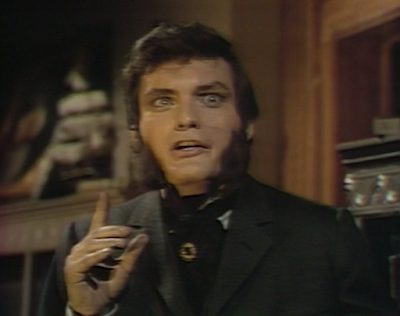 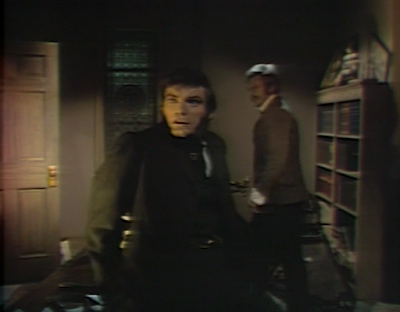 Dirk finds Beth near Quentin's room. He tells her to stay away from Quentin.

Quentin goes downstairs. He can still hear the heartbeat, and the lights go out. He follows the sound into the study and looks down at his grandmother's body—the source of the heart beating. 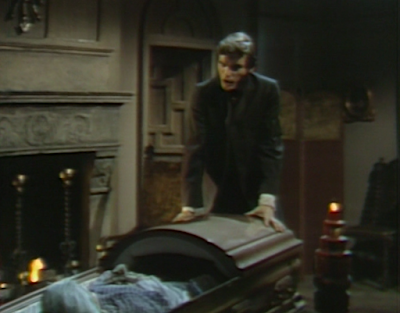 John: Amidst the search for Edith's will, Barnabas has a chance to meet this time-period's Josette, and immediately starts to put the moves on her. I wonder how she'll react to seeing the portrait at the old house. And is it just me, or shouldn't Barnabas be getting hungry? Unless we're to believe the gypsies are bringing him a buffet of town wenches to snack on.

Christine: I assume it is part of Sandor's duties to see that he is fed, just as Ben did before him and Willie did after him. It's just like Barnabas to forget that he's gone back in time to save David Collins and start making himself cozy by setting himself up with another Josette lookalike. She surely enticed him by confessing that she's a romantic who's fascinated with the past, which was also what attracted him to Vicki.

John: Well look who showed up today. Our pal Roger Davis is back, now as Dirk. We haven't seen any of his signature head-grabbing just yet, but he certainly is rough with Beth. I don't think that's going to go over well with the family.

Christine: It seems his new signature move is girl grabbing. Beth seems to be softening towards Quentin, which should set up a nice adversarial relationship between the two hotheads. We had a preview of the wrestling matches that are sure to come should they butt heads over Beth. 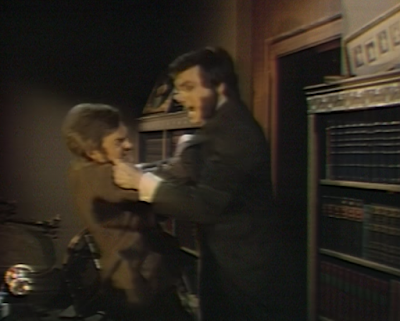 John: So our writers dip a toe into Poe today, with a Tell-Tale Heart beating for Quentin. I have to admit, I was kind of hoping for a guest appearance of our favorite skeleton in grand-ma-ma's coffin.

Christine: Those skeletons surely have been gathering dust in the Dark Shadows closet, but we still have Friday to hope for a reappearance of our favorite bony characters. It doesn't look like Barnabas intends to share his secret with Quentin just yet as I'd hoped, though it could be he's decided to use those long neglected powers he learned from an Indian in Barbados to plant a germ in Quentin's mind as he did Julia's in Episode 358. 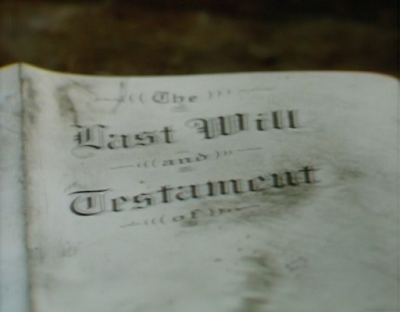