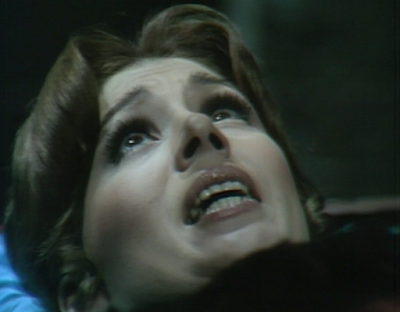 Barnabas makes his way to his coffin in the basement of the old house, and is shocked to find Rachel lying within it. She tells him not to take her with him, because he's dead. She passes out and Barnabas realizes that only Angelique could be so cruel. 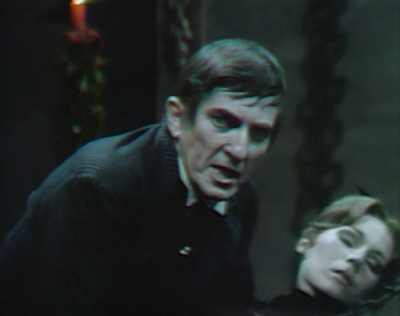 Rachel is in a chair in the old house when Barnabas wakes her. She asks where she is and how she got there. He asks what she remembers, and she describes seeing him, and then going out to get some air. He tells her that he found her in the woods and brought her home, only to have her collapse in the chair. She says she doesn't recall anything. She asks if he knows something that he's not telling her, and he denies it. She says she has to get back to Collinwood and leaves. 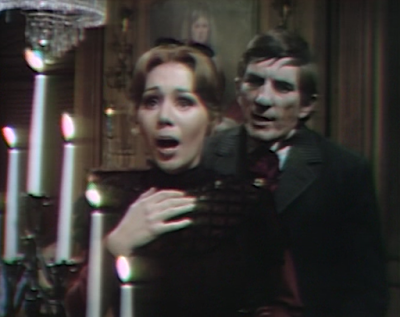 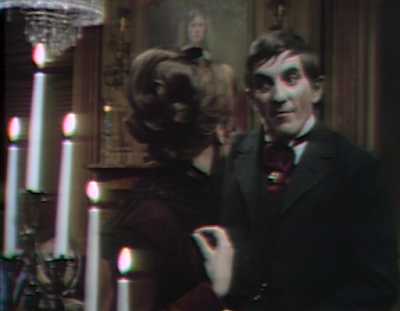 A rooster crows signaling the arrival of dawn. Magda opens Barnabas' coffin and finds it empty. He comes downstairs and tells her that he needs her help and will pay her well. He asks her for an amulet that will protect him from a witch. She says that she has one, but if there's a witch she'll need it. She agrees to get him an amulet by nighttime. He then adds that she must watch over his coffin. He tells her that the witch's name is Angelique, and she has one obsession—to destroy him. He tells her to go see Judith and tell her she's seen a sign in her cards showing the location of the will. He says that he hid it in Collinwood, and tells her that she can't let anyone know he was involved in its disappearance. Barnabas opens his coffin, but before he gets in he tells her not to entertain thoughts of betrayal. He then gets in the coffin and closes the lid. 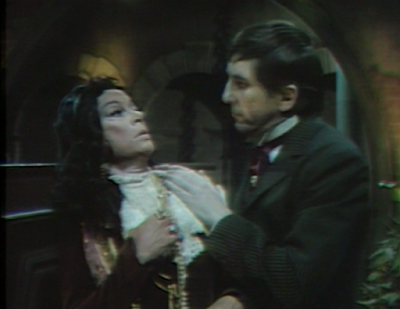 Judith asks Rachel how she is feeling. She says she's better, and looks forward to taking the children for a walk. Judith tells Rachel that Quentin has been a bad influence on Jamison. Beth comes in carrying a baby doll. Judith asks where she got it, and she says it just came in from Boston. Rachel says she's sure Nora will adore it. Beth starts to say it's not for Nora, but then says that it is. 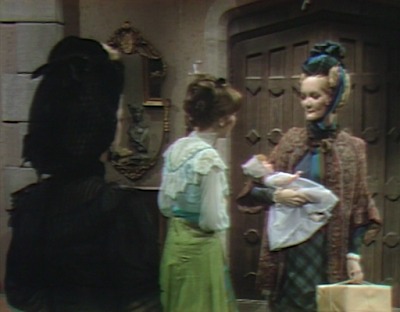 Judith asks her into the drawing room. While Rachel listens, Judith chastises Beth for just walking in through the front door. She says she's been careless, which is a sign of being emotionally involved. Beth says that she feels sorry for her, as she's so lonely. Judith says that if she can't do her job without becoming involved, a change will be required. Outside the drawing room, Rachel runs upstairs. 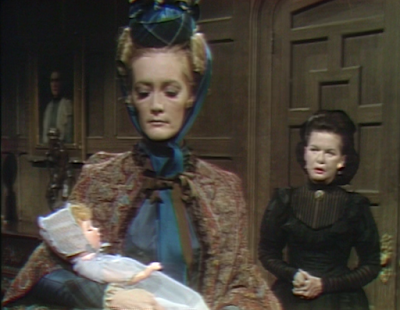 At dusk, Barnabas rises from his coffin.

Beth comes downstairs and Rachel comes out of the kitchen, asking her for help. Rachel asks Beth about Jamison and Nora's mother. She says that the kids ask her if she's ever coming back. Beth says it's a forbidden subject, at the request of Edward Collins. Rachel asks if anyone knows where Mrs. Collins is now. She says that no one does, and it's best that she not ask about it. Judith comes downstairs and tells Rachel that she should heed Beth's advice. Magda arrives to speak to Judith. She says she can tell her where to find her grandmother's will, and Judith lets her in. 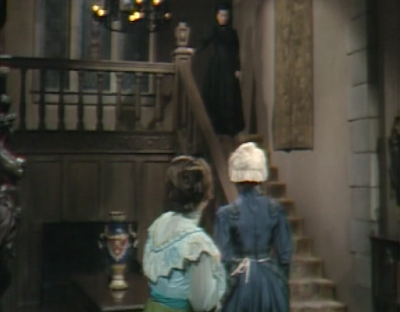 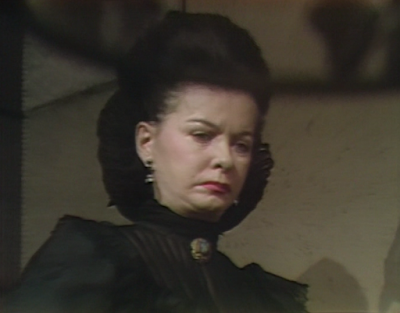 Magda deals out the cards and tells Judith what they mean. Judith doesn't understand. Magda tries to clarify, and says the will is in the heart of the room. She describes a book where she will find the will. She tells Magda that she will look in the family history tonight. Magda asks her to let her know if she finds the will. 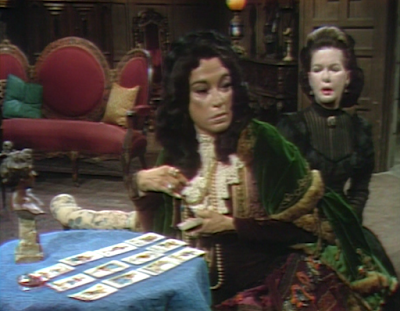 Barnabas asks Magda how things went, and then sends her to the old house.

Barnabas enters Collinwood and offers Rachel a charm to protect her. Rachel tells him he's very kind. Before leaving, he suggests that they see one another tomorrow night. 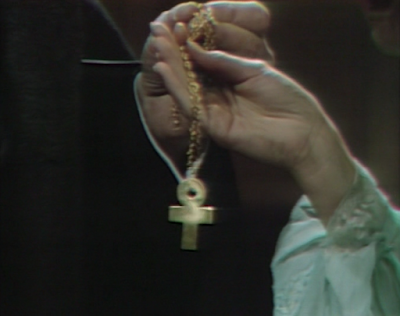 Judith comes downstairs with the will in hand. She goes into the drawing room and closes the door behind her. She thinks that she is going to inherit everything that belonged to her grandmother. 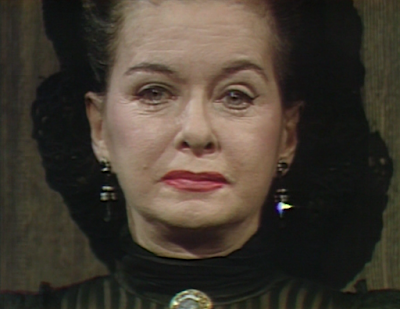 Rachel comes into the drawing room and tells Judith that she made a mistake mentioning the doll Beth brought home to Nora, only to find that Beth hadn't given it to her. Judith says she'll talk to her.

Beth comes to a door in the West Wing, with doll in-hand, and speaks to Jenny through the door. She tells her that she has a nice surprise for her, and unlocks the door and walks in. 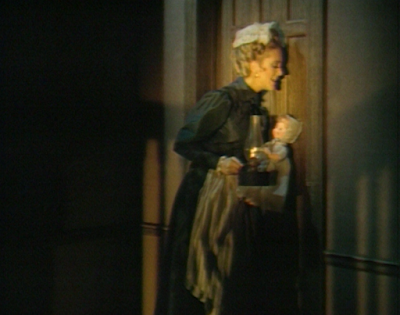 John: Barnabas explains how he needs Magda to stay with his coffin to protect him, and then proceeds to send her off to Collinwood on a separate mission. I guess it was a good thing that Angelique had the day off today. 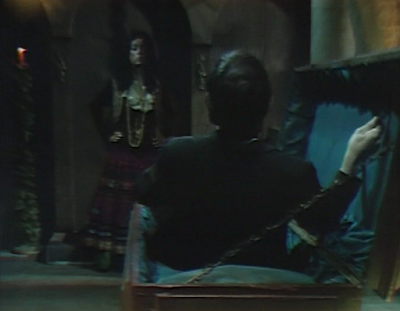 Christine: Somehow you missed seeing Magda watching over Barnabas' coffin when he arose. She went on her mission to Collinwood after that. He is taking a big risk by trusting her, but as long as he pays her well and she does not feel threatened by his nemesis, he may be safe.

John: What's with Beth walking through the front door cradling the baby doll? At the very least, I would expect it would arrive in a bag, if not a gift-wrapped box. Interesting that we've heard quite a few mentions of Nora without having seen her. I would assume Nora will have a strong resemblance to Amy in present day Collinwood, but it's been so long I wouldn't necessarily be surprised if they brought in someone new.

Christine: That certainly looked strange, but Rachel would not have had the opportunity to be nosy about why Nora didn't get the doll if it had been wrapped up.

John: So I'm going to go out on a limb suggesting that Jenny is in fact Jenny Collins, Edward's estranged wife and mother of Jamison and Nora. Of course that wouldn't line up with his wife being another incarnation of Laura the Phoenix—unless she's using a different name than all of those we saw documented in the cemetery with the crazy old caretaker...

Christine: What made you think Edward was married to Laura the Phoenix? Let's hope we may get to meet Jenny tomorrow and find out why she's locked away in the Tower room. Time for another tarot reading with Magda! Some interesting things to note that Magda did not mention was that the King of Wands to the left of "The Queen" and King of Cups to the right may represent Quentin and Edward respectively, while Carl is clearly "The Joker." It's appropriate that the Ace of Coins, which represents wealth, was an indicator of where to find the will, and as it turns out, may have represented Judith, since it sounds like everything was left to her. It looks like we were wrong about Barnabas not being astute enough to get the original will from Sandor. I wonder how Judith's brothers will feel about being left with nothing from dear old grand-ma-ma. Here's a recap of today's reading: 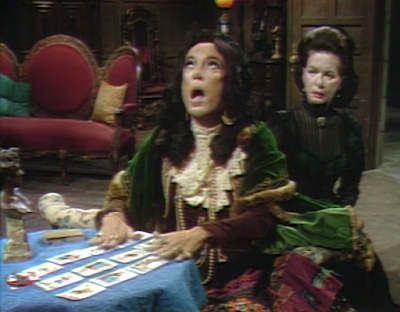