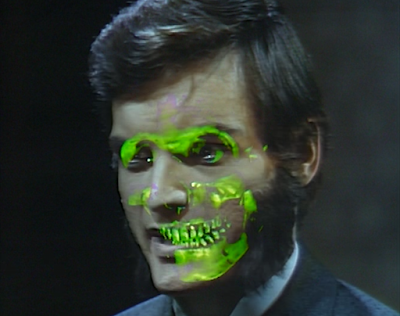 Magda tells Quentin he is worse than a gypsy—using a child for his black magic. Quentin assures her that he'll be fine. He asks if she still sees the mark of death, and she does. A skull superimposes over his face. He asks her to tell him how he's going to die, and who will try to kill him. He asks if it's Barnabas. She tells him that she knows he believes in her power. He admits it, and grabbing her hand tightly, asks her about what she saw. 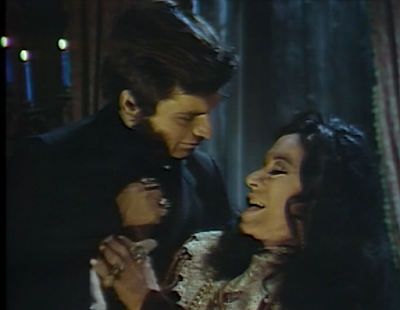 She tells him he always tries to get his way by hurting people. She suggests that he smile more. She then tells him that he might try to hide the knives. She says she can see more if motivated, and he hands over a stack of cash. She then reads his palm, and says a woman is holding the knife. 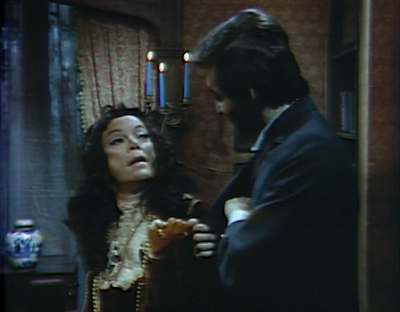 Jenny talks with Judith in a closed off room, saying she doesn't disturb the children while napping. Judith asks her if she's happier in this room, and she says she is. Jenny doesn't remember who Judith is. She then asks what she should name her children. Judith suggests that they are awake now, and Jenny picks up the two dolls and talks to them as if they were alive. 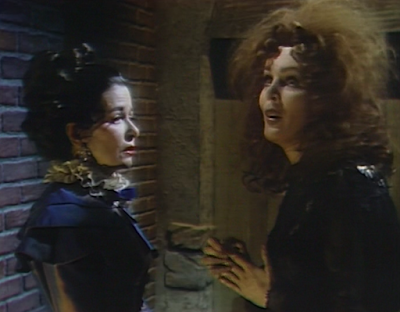 Quentin tells Magda that of course a woman is going to kill him. He plays his Victrola and tells her he thinks of himself when his music is playing, and tells her it's his theme. 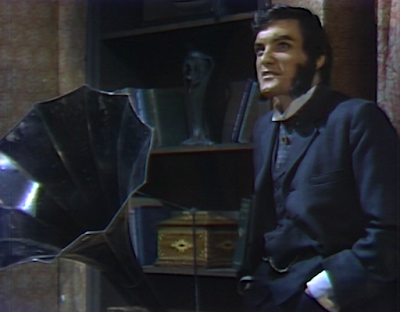 Jenny says the children have fallen back to sleep. She then seems irritated, hearing Quentin's music. She screams that he's back. She tells Judith that she couldn't wait to tell her. She says he's come back to be punished. Judith says the babies are crying in order to distract Jenny, and then leaves the room and locks the door. Inside, Jenny tells the dolls that they don't hear the music. 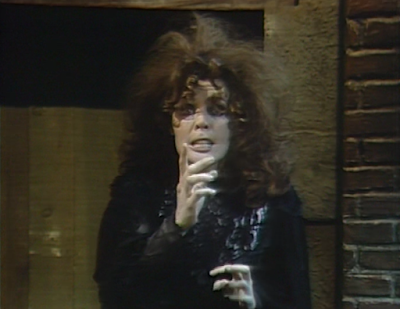 Magda tells Quentin she's tired of hearing his theme. Judith comes in and tells him to stop playing the music. She tells him it's driving her mad, and he responds that perhaps that's why he plays it. He tells her to get out of the room. She reminds him that it's her house. He brings up the will. She tells him to stop playing the music, and to get Magda out of there. She leaves, and he slams the door behind her. He tells Magda to continue reading her cards. 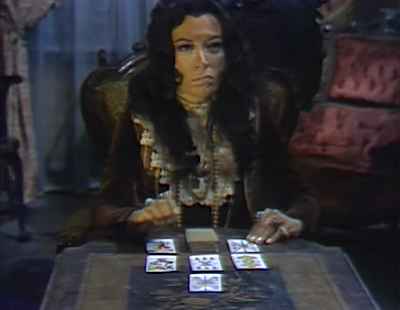 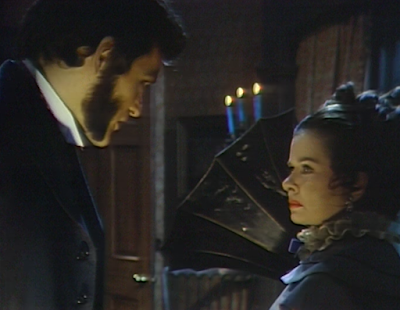 Judith tells Dirk she has a way for him to make some more money. He asks for details, and she tells him to follow her.

Jenny dances while singing Quentin's theme. Then she stops and tells the children that it wasn't her dancing.

Judith explains that Quentin can't know that Jenny is in the house. She opens the door and Jenny tries to run out. Dirk grabs her, and Judith slaps her when she gets hysterical. Dirk drags her back into the room, and Judith tells him that he must see to it that she never leaves the room again. 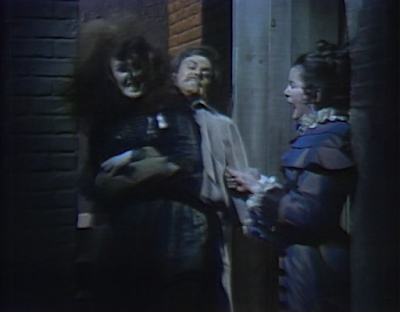 Quentin tells Magda to look into her crystal ball. She takes it out and he asks her what she sees. She describes the full moon. He asks when the next one is coming, and she says it's in two days. He asks who is trying to do this to him. She tells him the woman was once very beautiful, but she can't see the name. She says the name of the woman who will kill him begins with J. He asks if it's his sister Juidth, and she says she didn't say that. She gets up to leave, and he asks if she's going to run back to Barnabas and confide in him. He threatens her, telling her not to do anything that would make him angry. 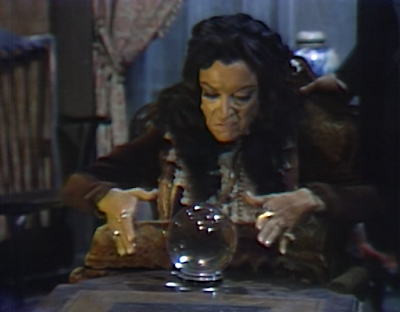 Judith brandishes a key when Quentin and Magda come downstairs. He sends Magda off, and invites Judith into the drawing room. He asks her what her solutions are for his life. She says she offered him money to get out. He says that was Plan A, and he wants to hear Plan B. He tells her that his next thought would be murder, and asks if she's ever considered murder. 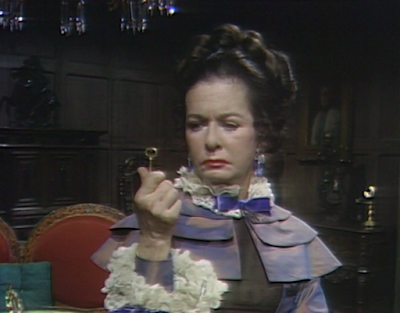 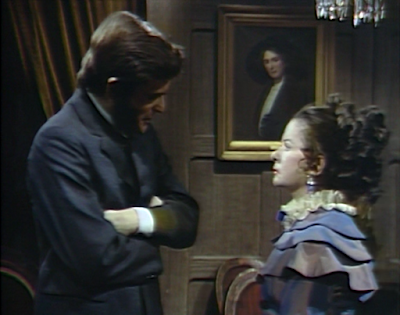 Dirk brings Jenny coffee, but she knocks it over. As he starts to clean it up, she bashes him over the head with a tray. She picks up his keys. 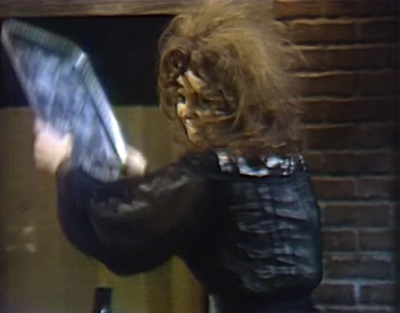 Quentin tells Judith that if she starting thinking about murder, he would come back to haunt her. 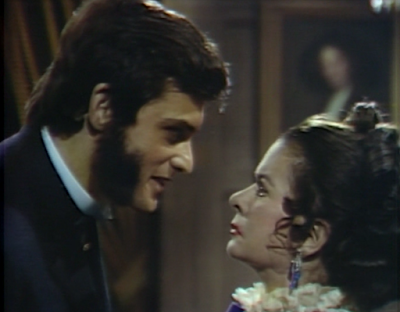 Jenny wanders through the house, finding herself in Quentin's room. She picks up a knife and brandishes it, swinging it through the air in a stabbing motion. 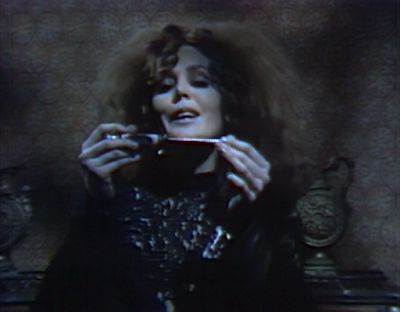 John: The Nutty Jenny act is wearing thin. I hope we soon find that there's more to her than this two-dimensional portrayal.

Christine: I'm wondering why they are keeping her presence secret from Quentin. I look forward to having him discover who the J lady with the knife really is.

John: Wow. Rather heavy handed in declaring Quentin's theme as exactly that. I almost expected them to superimpose a title suggesting that you run out and buy your own copy on vinyl!

Christine: It was delivered seriously, but I wonder if it was a bit tongue in cheek, especially after Magda said she was tired of his theme, and Judith claimed it was driving her mad. Did you know that Cobert originally created the tune for Curtis' version of Jekyll and Hyde?  You can hear him talk about it in the following interview. I wonder how he feels about the Andy Williams' rendition.


John: Dirk, like his other Roger Davis cronies, is dumb as a bag of rocks. He fell for the old, 'turn your back on the prisoner and see what happens' routine. Of course, when your only criteria about a taking on a potential job is whether it pays, should we really expect a higher caliber person?

Christine: Perhaps the real mistake was in bringing Jenny a huge pot of coffee. That could explain why she looks and acts the way she does. She's not crazy, she's just a caffeine freak. 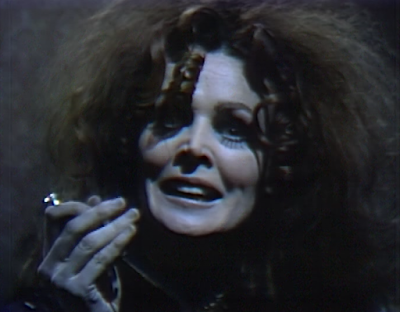