Edith asks her visitor his name, and he says it's Barnabas. She asks him to come into the light, and when he does, she points at him and says that he is the secret. Passed down between generations, he was never to be let out. She says they have failed, and she must warn Edward. Edward enters. He asks Barnabas to leave them alone, and Barnabas steps into the hall. He says she must tell him the secret, as Barnabas listens outside the door. She asks Edward what his grandfather would do. Edward begs her to pass on the burden to him. She says, "mausoleum." Edward asks her what she means, but she says she is weak. Outside the room, Barnabas leaves in a hurry. 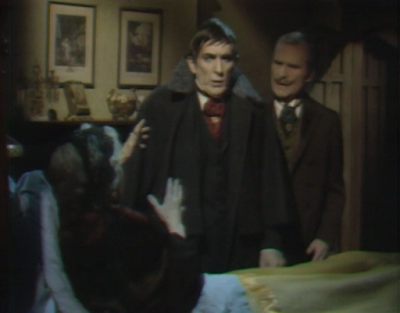 At the old house, Barnabas asks Magda where her husband is. He tells her that she must find him, and they must move the coffin to the old house. The secret room must look undisturbed for 100 years. He sends her to find Sandor and do his bidding. 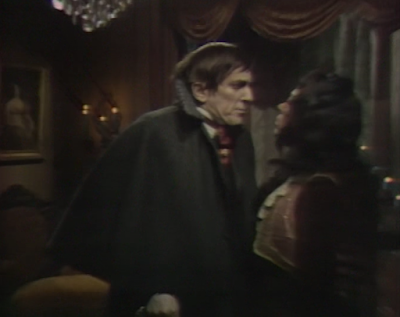 Edith sees Edward and says he's come back. She asks to see Judith, who she says was kind while he was away, thinking she was getting the money. She adds that Edward was unkind for leaving her. He asks her about the mausoleum. 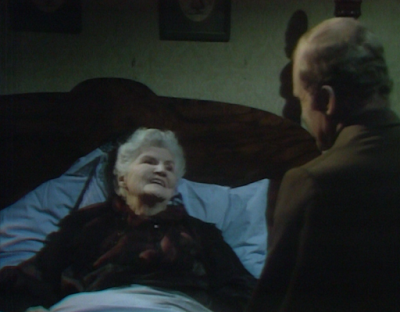 Barnabas waits in the drawing room in the main house. A man sneaks through a secret panel with a gun, points it at Barnabas and tells him he knows everything about him, and where he has come from. With a gun to his head, Barnabas says he doesn't know who he is. Carl says he's a spitting image of the portrait. Barnabas claims that the portrait is his great-great grandfather. Carl asks if that's his story. He asks Barnabas to admit something to him, as long as it's the truth. Barnabas asks him to put the gun down, and Carl says he's going to count to three. Barnabas says he's from England, and Carl pulls the trigger, revealing that it's a trick gun. 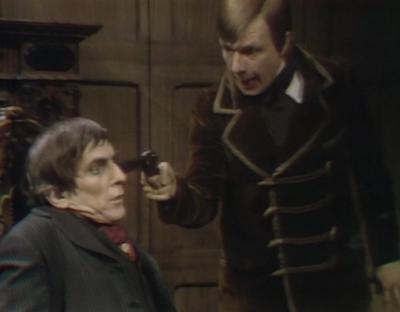 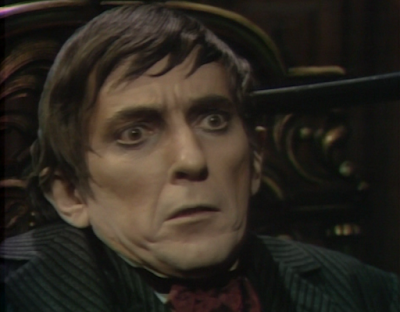 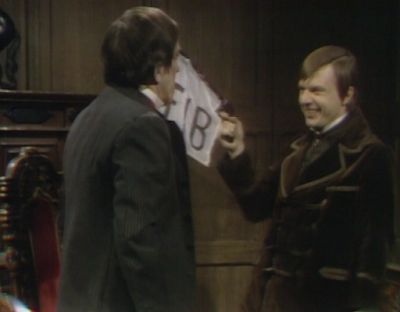 Carl Collins introduces himself to Barnabas, and apologizes for tricking him. He asks Barnabas who he thinks is going to get their grandmother's money. Carl tells Barnabas that they are going to be great friends. He then says he has to be on his way to find out you-know-what. He leaves Barnabas with his trick gun, telling him that Judith hasn't seen it yet, and he can play a trick on her, asking her what she's hiding. Barnabas thanks him, but suggests that it isn't the right time for it. Carl asks him not to tell Edward he saw him if he comes downstairs, and Barnabas offers to only tell the truth. 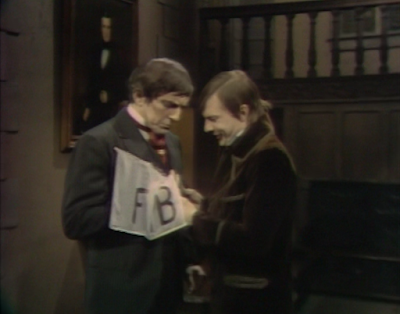 Edith tells Edward that every time she closes her eyes, she thinks she's seeing her room for the last time. She asks if she told him the secret yet. He says she didn't. She then asks what he's doing in the room, saying that he's dead. She says she hated Daniel for making them live in the main house rather than the old house. Edward watches on, confused. Edith tells Daniel not to come closer. She asks Edward to make Daniel go away, and he assures her that they are alone in the room. He asks her about the secret again. He reminds her that he is her grandson Edward, and that she has a secret that she has not told him. She says that everyone keeps asking her to tell them the secret; he Judith, Carl and Quentin. He tells her that she should not have invited Quentin back. 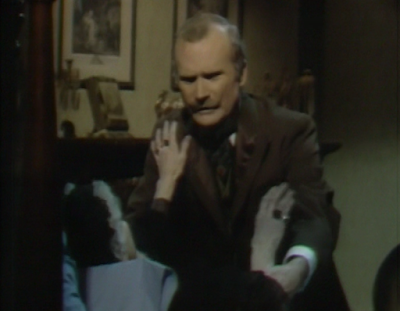 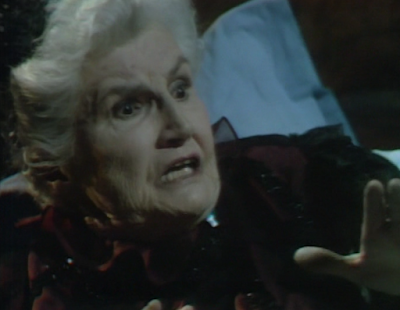 Edward leaves the room and runs into Barnabas outside. He says she's asleep, and invites him into her room. He asks Barnabas to tell him about himself.

Carl asks Magda for information about his grandmother's will, and she says that the cards won't her the truth without money in her hand. He gives her some cash and asks if she knows about the will. She starts to deal the cards, saying there's more money than anyone knows. She plays a joker, which Carl assumes means the money is coming to him. She then says there is murder behind the joker. 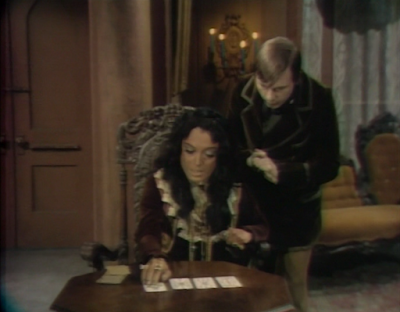 Edward says he'd much rather have Barnabas in the old house than the gypsies. Edith calls to Edward, and asks him to come closer. She tells him to listen. 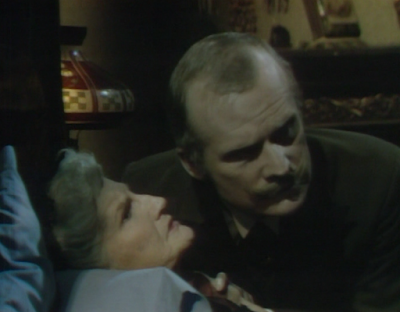 Magda tells Carl the money won't stay with whoever gets it. She turns up the next card and gets up from the desk, frightened. 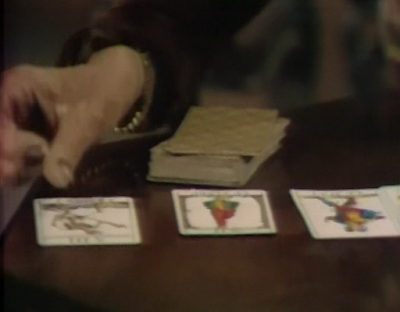 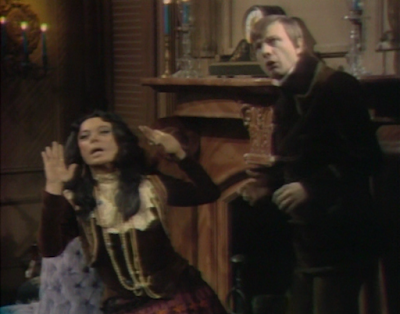 Edward closes Edith's eyes and says that she's gone, and he's going to find the secret out if it's the last thing he does. 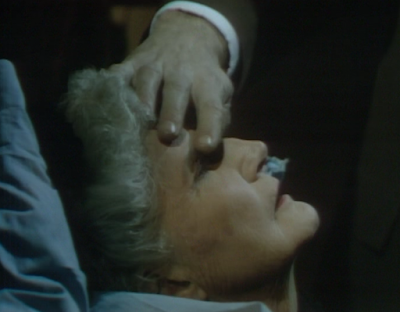 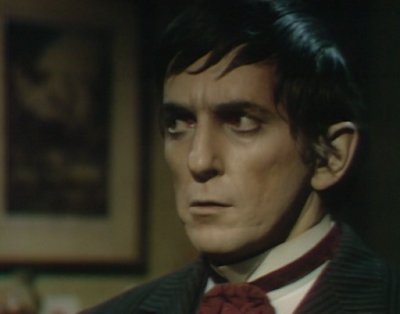 John: Carl is certainly something else. Of course it's once again surprising that Barnabas would have no reaction to an old family member resembling Willie Loomis, of all people.

Christine: Carl Collins is sure to liven things up in 1897! I'm glad to see John Karlen finally get the opportunity to take on a new role since he missed out on 1795. 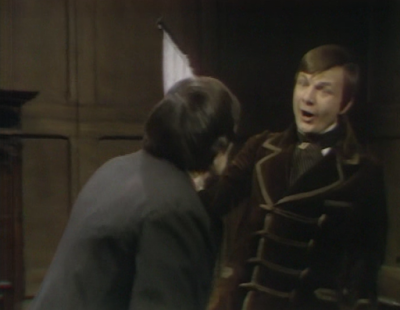 John: Do you think Magda found Sandor, and was able to get him to move the coffin to the old house? Will the hint of the mausoleum be enough to lead Edward to the secret room? If he does find it, will he be extremely underwhelmed by what he finds?

Christine: Yes, yes, and maybe. I think we can expect Barnabas to be resting in his coffin at the Old House come morning, and I wouldn't be surprised if Edward already knows about the secret room, since he may be aware that Joshua once used it to hide munitions during the Revolutionary War. As far as whether he'll be able to make anything of it remains to be seen.

John: I'm going to miss Edith. Despite her never leaving the bed, she added some gravitas to the beginning of our time in 1897. Too bad she didn't get to reveal Barnabas as the vampire who brought shame upon house Collins.

Christine: On a show where ghosts abound, characters always have the option to make a reappearance, so don't count her out just yet. I certainly would have liked to have seen her interact with more of the family members, though she had some choice interactions with Quentin that would be nice to have repeated.
Posted by John Scoleri at 6:00 AM

Spoiler Alert- Edith returns. Not as a ghost or even in this 1897 timeline. She returns as a living woman in 1840. And she's really not a good person