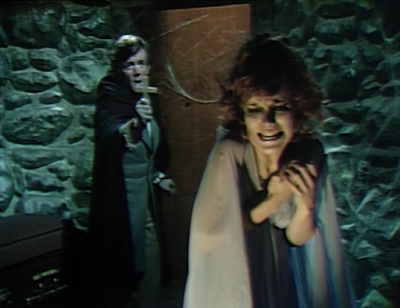 At dawn, Roxanne returns to the crypt. Randall holds up the cross and she begs him to put it away. She says she must get to the coffin. He says that preventing her is the only way she can find peace. She begs him to let her live, and he refuses. He says it's the only thing he can do. She says she's not responsible for what she's become. He asks her who is responsible. She pleads with him for mercy, as his own sister. He slowly lowers the cross. She turns on him, and he raises it again, saying that she's not Roxanne. The sun rises and she screams as the room is bathed in sunlight. Roxanne calls for Barnabas to save her. She burns up in the sunlight. 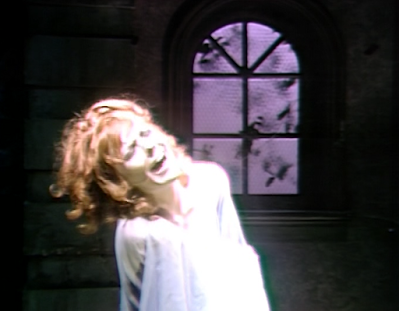 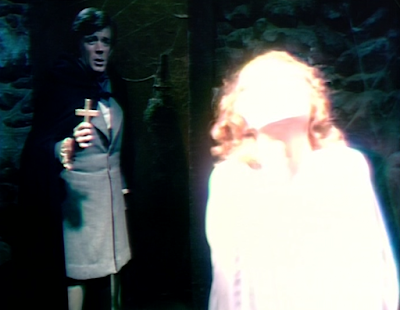 Randall places the cross on the stain left behind by Roxanne's remains.

Daphne re-reads the note from her sister. Quentin comes in and tells her that Julia is at Rose Cottage, the victim of another attack. He invites her to come with him to get her. She says she thinks Joanna's spirit is restless, and will remain that way as long as she stays in the house. He asks if she wants to leave him, and she says no, that she only just found him. They hug. He tells her to wait until he gets back from Rose Cottage, and they'll try to settle things then. She asks if there will ever be an answer for the two of them, and he kisses her. 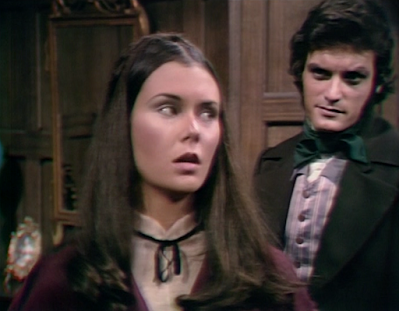 Randall arrives at the old house, looking for Barnabas. Trask hears him and calls to him from the basement. He begs Randall to let him out. Randall explains that Trask is no longer under Roxanne's control, as he destroyed her. Trask says they need to discover who is responsible. Randall can't understand why Barnabas locked Trask in the cellar, and offers to go to Collinwood in search of a key. 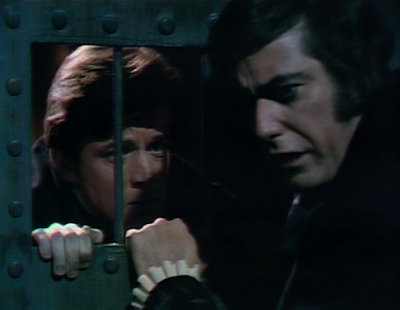 In the basement, Trask hears chains. He asks who's there, and no one answers. Trask goes to the bricked up wall and listens. It seems to be where the sounds are coming from. 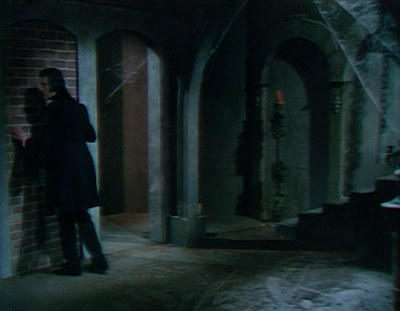 Quentin helps Julia into the drawing room. He asks her how she accounts for her incredible recovery. Randall arrives, and asks her if she knows that it's all over. She nods. Quentin asks what he means, and asks what's going on. Randall tells him that Julia was attacked by a vampire — Roxanne. At dawn, he prevented her from reaching her coffin until the daylight destroyed her. Quentin says someone has to be responsible for making Roxanne a vampire. Randall says they're still at large. He asks Julia if she knows where Barnabas is. He says Barnabas locked Trask in the cellar at the old house, but then he left him there all day. He doesn't understand why Barnabas didn't stay with him. Julia says she has keys, and offers to go with them. Quentin asks who else knows about Roxanne. He says just Flora and Trask. Quentin says he doesn't want Samantha to know. 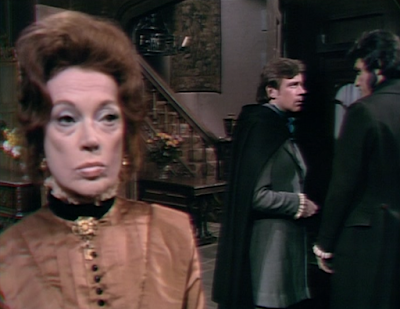 Trask continues to listen at the brick wall. He assumes he's imagining it, and then decides he's in control of his faculties. He demands to know who is behind the wall.

Quentin tells Daphne that Julia doesn't know who attacked her. He tries to fondle Daphne's head, and she pulls away. She says they'll only have peace if she leaves Collinwood. He says he'll follow her if she leaves. He tells her that his place is with her. She tells him it's wrong for her to stay. He says Joanna didn't write those notes. He says it's possible that Joanna can help. He tells her they'll conduct a seance! 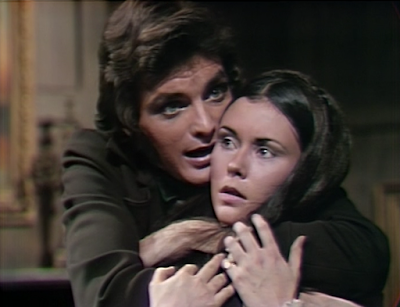 Randall comes into the basement and apologizes to Trask for taking so long. He asks him if something is wrong, and Trask tells him there is someone behind the brick wall. Julia tells him the wall is part of the house's construction. Julia says she doesn't hear anything, and Trask says that he doesn't right now, either. He asks her if there's a reason she doesn't want him to see what's behind that wall, and asks if she knows what's behind the wall. 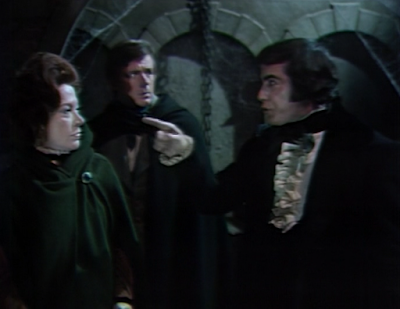 Randall tells Julia that Barnabas has a lot of questions to answer. He says he knows more about vampires than he is letting on. He knew how to find her, and what to do to put her to rest. Julia says that following that logic, a man who put out a fire is guilty because he knew how to put it out. Randall adds that Roxanne cried out for Barnabas, saying he was the only one who could help right before she died. Julia reminds him that they loved one another. Trask says he knew Barnabas was involved from the night she was stricken. Randall says Julia's explanation may be valid, but he will not be satisfied until he gets answers from Barnabas. 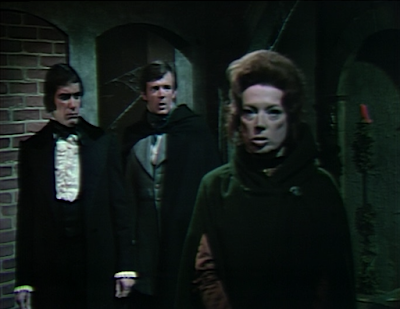 Daphne and Quentin prepare for the seance. She is reluctant, but sits down at the table. He explains the process, and holds her hands. He begins the ritual, and calls for Joanna to communicate through one of them. He asks her to appear to them, or give them a sign. Lightning flashes outside. Quentin asks her to appear to them and speak. The drawing room doors swing open, and a figure stands in the shadows. 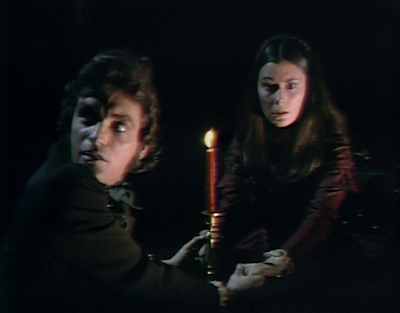 John: I was really kind of hoping for an onscreen disintegration effect when Roxanne died, but other than bright lights, we got nothing. Not even a skeleton in a dress lying on the crypt floor. 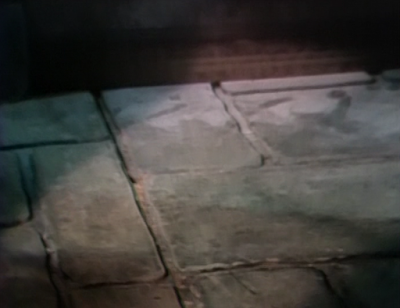 Christine: I am wondering if someone forgot to lay out the skeleton. The zoom to the floor was confusing since it had me expecting to see some king of vampire residue. Is that lame stain on the floor truly all that's left of her or are those bits of debris between the stones remnants of her disintegrated corpse? Also, does the demise of Roxanne indicate a change in future events at Collinwood? I have to say I'm impressed with Randall. I didn't think he was up to the task. 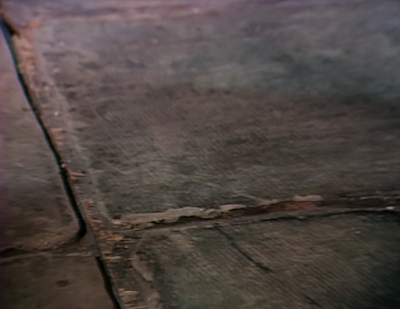 John: I love how Randall, Quentin and Julia have drinks while discussing the vampire activity in Collinsport. Meanwhile, Trask still locked in the cellar of the old house! 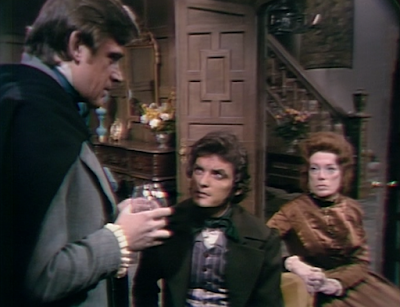 Christine: That Randall guy is really starting to grow on me. Of course, if he didn't let Trask cool his jets in the cellar, Trask wouldn't have heard his daddy rattling his chains at him.

John: Do you think the second Quentin and Daphne scene was presented out of sequence? I guess he could be avoiding telling her that he knew who Julia's attacker was, even though he could add that she's no longer a threat. And who would have thought it would be time to break out the seance tracker! I like how rather than just touching fingers, Quentin got to hold Daphne's hands. Of course the seance tracker should make it handy to figure out just how many times the seance ends with the drawing room doors swinging open to reveal a figure standing in the shadows!
Christine: It's a classic Dark Shadows séance finale! It would be totally awesome if it turned out to be Laura Collins, in homage to Collinwood's first séance.

Episode 1126: Gerard conducts; Flora and Lamar Trask participate; the ghost of Reverend Trask informs them they are surrounded by evil and tells them to beware the cross; held in Rose Cottage in 1840
Episode 1150: Quentin conducts; Daphne participates; Joanna Mills is summoned and a hooded figure appears; held in the drawing room at Collinwood in 1840
Posted by John Scoleri at 6:00 AM