Quentin sneaks into the drawing room, and watches the door, waiting. After a while, Daphne opens the door with a note in her hand. Quentin demands that she give him the letter, and asks how she knows about Joanna. He grabs the note from her, and sees that it's addressed to Desmond. He apologizes and returns the letter. She says he's difficult to understand. He says he'd like to explain, but he can't. 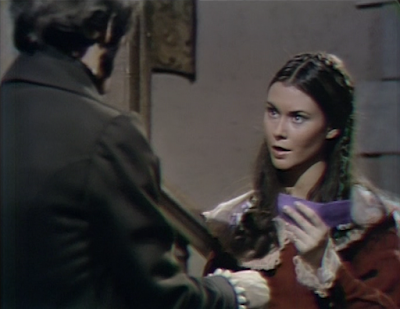 He then finds a note on the table from Joanna. He wonders how it got there. It speaks of them being together soon, and his playing a song for her on the piano. He goes to the piano and plays. Samantha interrupts him with applause and says it's a lovely song. She asks what it is, and he stops playing and gets up for a drink. 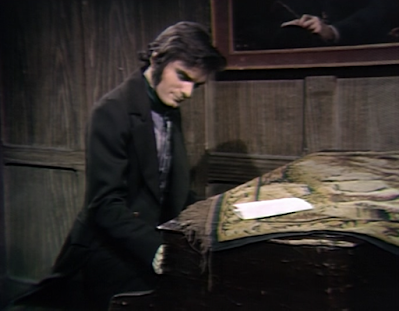 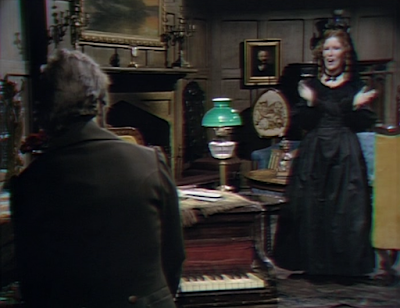 They argue, and she says he demanded that she stay. He clarifies that he didn't demand that she stay — he told her that she couldn't leave with Tad. She tells him he should destroy his staircase. She asks if Trask found out. He says he will finish the staircase if only to send Trask to another century. She says that she doesn't believe Trask's claims that he killed Lorna. She stomps out and tells him that he can finish his song. 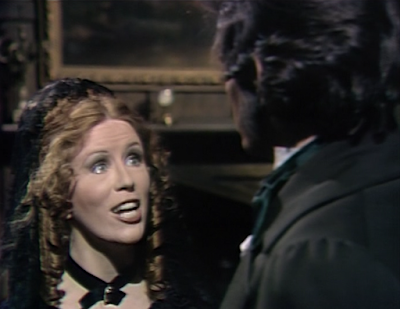 Daphne reads from her journal, about making him love her so he would appreciate the torment. Tad comes in and asks her who she hates. She asks what she's doing in her room, and asks what else he heard. She says her diary is personal. He points out that their minister says that hate is evil. He asks if the one she hates is in the house, and she says she's not going to discuss it with him. He says he's very good at finding things out. 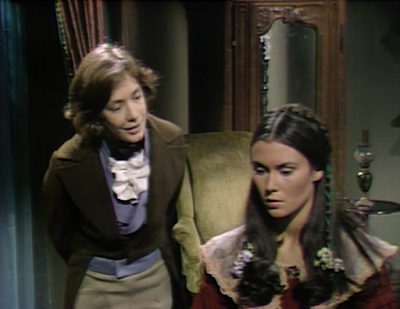 Carrie complains about learning Latin. Daphne tells her it will help her learn other languages. As she practices saying love, Tad points out that Carrie loves Gerard. He and Carrie begin to argue. Samantha comes in and asks Daphne if this is how she encourages discipline. She tells the kids they will spend the rest of the afternoon at Rose Cottage. Carrie is excited, and Tad says he knows why, and adding that Gerard won't be there. 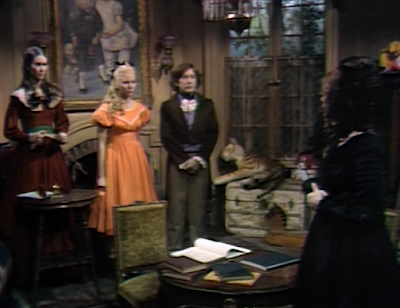 They leave, and Daphne explains they have more hours of schoolwork. Samantha explains that if she wanted them to have regular hours, she'd send him to school. She says she knows what's best for her son, and says she refuses to have him discipline or criticize her child anymore. She adds that Tad is not Daphne's whole life, but he is hers. 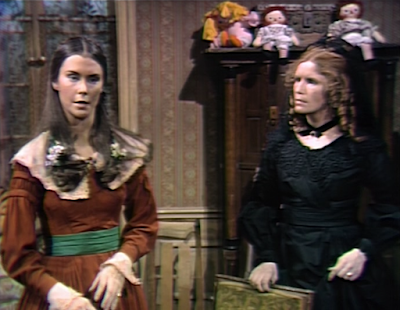 Tad tells Carrie that Gerard isn't in Rose Cottage, or their mother wouldn't be taking them there.

Quentin comes into Daphne's room. She asks him what's wrong. He says he came to apologize. She says she think he needs a friend, and so does she. He says she should have a room full of light and sun. She mentions that she has felt the strain of Samantha. She adds that Samantha hates her, having stopped classes today. She realizes that's her issue, and shouldn't complain. He asks her if she knows what it is to be without love. She says that she knows very little about love. Quentin asks if she has a secret love. She shakes her head. He says that he does, too, and they mustn't keep secrets. He leans in to kiss her. He says he now has something else to apologize for, but he won't. He says he feels very peaceful now. She kisses him. 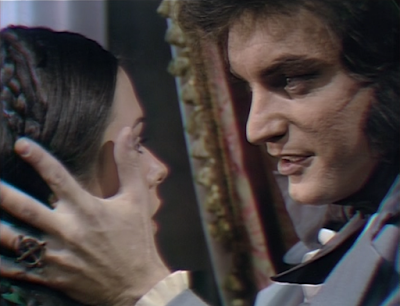 He tells her that they have to trust each other, and kisses her again. He then says he's leaving Collinwood in about an hour to take care of something that concerns both of them. He asks if she'll be there when he gets back, and she says that she will. After he leaves, she unconvincingly says that this is all part of her plan. 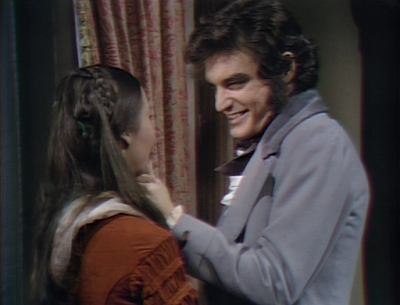 Tad points out that Carrie was with Gerard all day, his mother is furious with her. She asks Tad if he knew she was psychic. She shows him the crystal ball Gerard gave her. She stares into it, and says that it's changing. He asks if she can see the new governess, since this one won't last long. She says she sees the two of them lying dead in the room. He tells her that she's crazy. She's frightened. 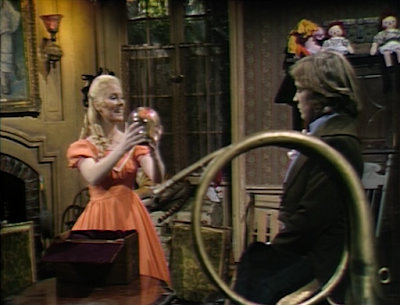 Daphne is writing in her diary when Samantha arrives with a note from Quentin. She asks if Daphne cried and told him what an ogre she was. Daphne says she did not, but he did mention how she upset Tad's school routine. She reminds Daphne that she runs the house. 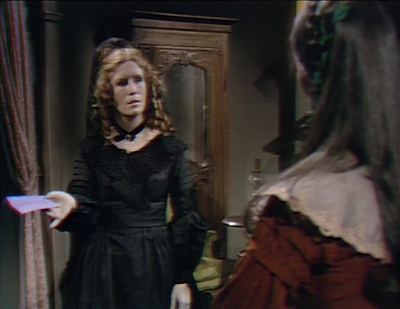 Quentin speaks to Joanna's doctor. She says they thought she would return home, and her body turned up on the beach. He mentions a visitor she had before disappearing, nothing that she was quite violent when the girl left. He tries to remember more. 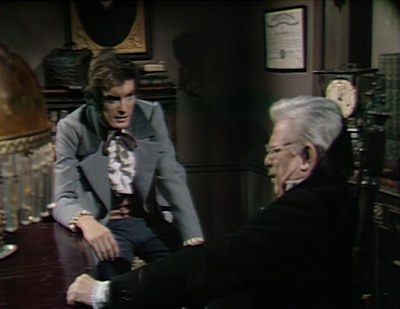 Quentin bursts into the drawing room and tells Daphne that he knows who she is — the sister of Joanna Mills. 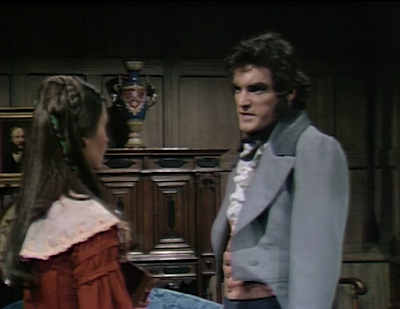 John: Quentin doesn't do a very convincing job fake-playing the piano. That aside, I don't think what was playing warranted the initial accolades Samantha threw at him.
Christine: I love how Quentin threatened to finish his time traveling staircase and send Trask to another century on it. That would be awesome!
John: We seem to be pretty far from the loving-ghost relationship between Daphne, Tad and Carrie that we saw in 1970. Or was it 1995? Do you think that in time, they'll come to be the best of friends we were led to believe they were? Or do you think that friendship developed out of post-mortem necessity?
Christine: Tad certainly is a little devil, which makes him very entertaining to watch. They may end up bonding together against the cruel and evil ways of Judard. Either they wear the same outfits every day or they are on their way out soon, considering they are currently adorned in the outfits they will be wearing in their afterlives. 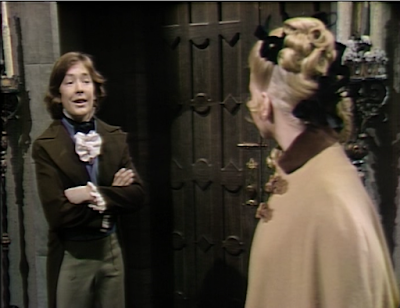 John: After an opening fake-out, Quentin finally confirms by the end of the episode what we've known for some time: Daphne is Joanna's sister! And now we wait for the rest of the story...
Christine: Thank goodness he found that out quickly, because I don't know that I could endure much more of his kissy face with Daphne.
Posted by John Scoleri at 6:00 AM