Trask says he thinks they should move ahead faster. Gerard says they must not move too fast until they can prove the witchcraft is being practiced. He tells Trask that Quentin invited him to Collinwood this evening, and Trask tells him to watch him closely. Gerard pretends to get something in his eye and asks Trask for a handkerchief. He tells him that he'll return it tomorrow. 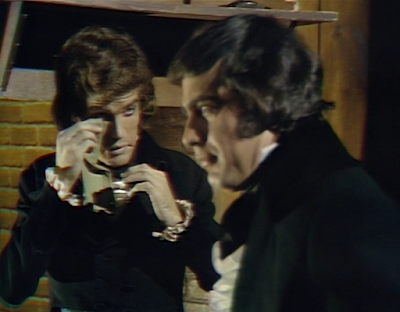 Quentin shows Gerard his staircase. He tells him that by going up the stairs, he can travel through time. Gerard asks if he's serious. Quentin says he's been working on it for years. Gerard asks if he has the theory written down, and he says he does. He offers to go and get it, and Gerard asks him to do so. After Quentin is gone, Gerard uses the handkerchief and a totem to send a dream to Trask, a dream in which he will see an act of witchcraft. 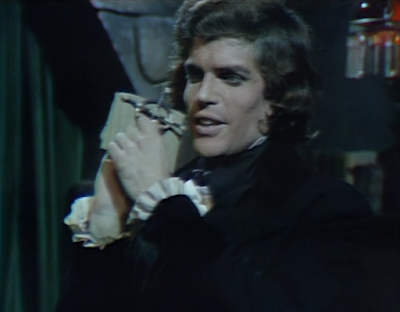 Trask sleeps in a chair by the fireplace. He begins to dream. He sees Quentin carrying the body of Lorna, with the mark of the Devil on her forehead. Trask tells him he will have to answer to the almighty. Quentin tells him to look at his ring, because he's next. Trask bolts up from his sleep. 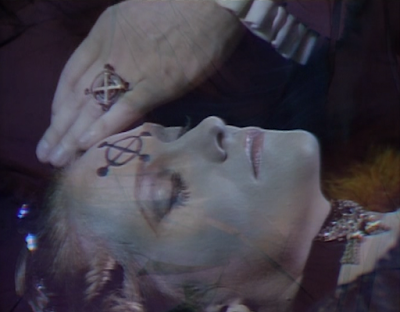 Quentin returns and hands Gerard a journal. He tells him to flip to page 47. He does, and starts reading. Quentin says he needs a few more days to finish it when Samantha bursts in. She's surprised to see Gerard. She tells him that she'll talk to him after Gerard leaves the house. She leaves, and Quentin says they should not let her ruin their friendship. 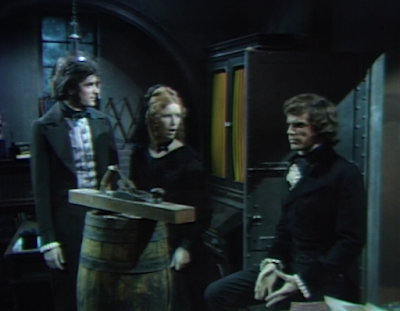 Samantha answers a knock at the door. It's Trask. He warns her that she must leave Collinwood immediately. She asks if he's lost his mind. He says the truth about Quentin has been revealed to him in a dream. He explains that Quentin is in league with the Devil, and adds that he was responsible for Lorna's death, and possibly Roxanne's. She says that she's always been troubled by the work he does in his laboratory. She tells him that even if he's right, she can't leave Collinwood. Trask tells her that he will keep her informed. Quentin walks in, and Trask excuses himself. She complains about Gerard being allowed in the house. He says he decides who comes and goes. She asks if her father and brother are still welcome. She admonishes him for stealing Joanna from Randall, and asks if he's seen her again. He explains that he'll never see her again, because she's dead. She asks if Randall knows, and he says he doesn't think so. She says she's sorry, and he doesn't believe her. 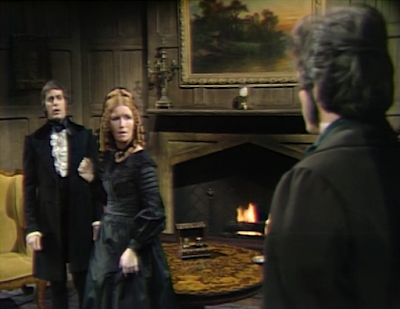 Daniel can't believe the talk of witchcraft in Collinwood. Samantha tells her Trask was in a terrible state. Daniel calls him a pompous imbecile. Samanthat brings up Quentin's staircase, and Daniel asks whay she means. She explains that Quentin is building a staircase to travel through time. She tells Daniel he should consider changing his will to favor Tad. He says he needs time to think. 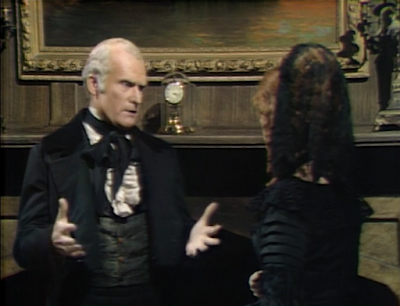 Gerard tells Trask he never should have gone to Samantha because of a dream. Gerard asks why he did it. Trask says that he understands how her mind works. He's sure she has already told Daniel. Gerard returns Trask's handkerchief. 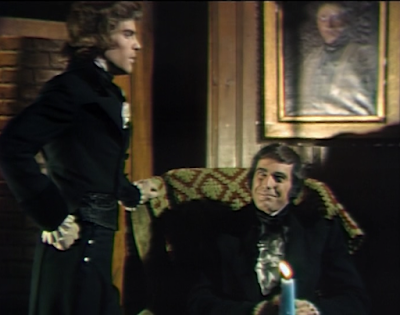 Daniel confronts Quentin, asking if he's practicing witchcraft in the house. Quentin asks who planted this suggestion, and Daniel says it was Samantha. Quentin says Trask put her up to it. Daniel asks him again, and Quentin assures him he is not practicing witchcraft. Daniel asks about his staircase, and Quentin tells him it's a harmless experiment, a metaphysical attempt to expand man's horizons. He bids his father goodnight, and runs into Samantha on the staircase. He tells her that he will strangle her if she ever tries to undermine his relationship with his father again. 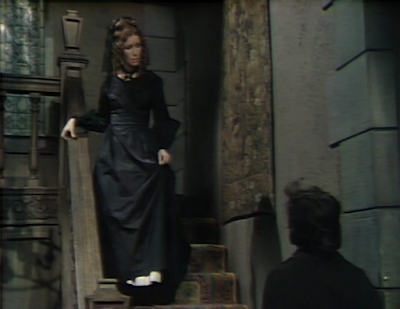 Daniel asks Gerard for his advice. Gerard points out that he's best friends with Quentin, and would defend him to the death. Daniel asks if Trask's allegations are unfounded. Gerard says he'd need to see more evidence to even consider it. Daniel asks about the staircase, and Gerard says it's completely harmless. He tells Daniel he should check it out for himself. 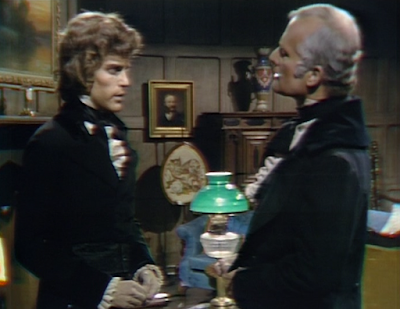 Gerard shows Daniel the staircase. Gerard explains that the theory is by ascending the staircase, you would either go forward or backward in time. Daniel starts up the stairs. From the staircase, he sees Lorna being strangled by Quentin. He yells at him to stop, and then clutches his chest. 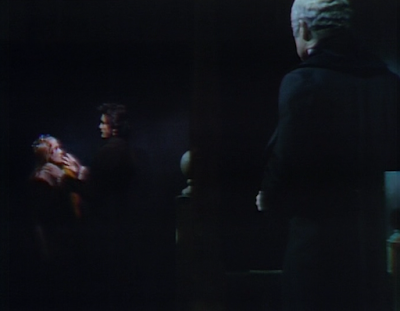 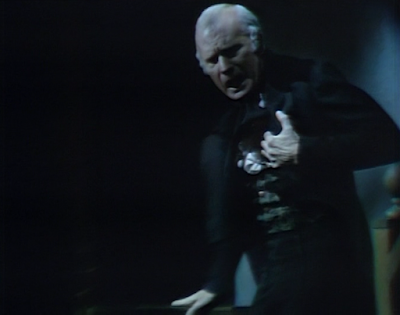 John: Try Insta-Dream™to send a dream (or nightmare) of your choosing to your intended target! All you need is a personal item of theirs (not included), and you'll be manipulating their actions in no time! No dolls necessary!
Christine: Unfortunately, you need to purchase the upgrade package to receive a dream with any substance, though it seemed unnecessary for Judard to send a dream when he could have just implanted a vision as he did with Daniel.
John: Quentin's documentation on how to on build a staircase through time isn't exactly a master's thesis. I guess I should just be thankful that the writers are not dwelling on trying to explain something that's so ridiculous on its very face. 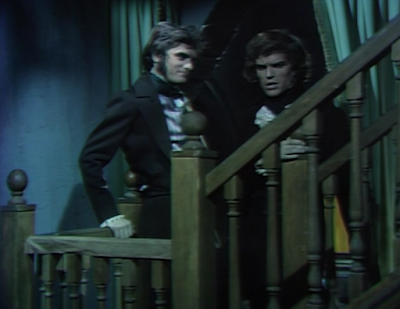 Christine: I'm thinking the Stairway Into Time deserves an Andrew Lloyd Weber style musical production.  It was just two weeks ago that Quentin offhandedly mentioned his crazy idea to build a time traveling stairway to Barnabas, and now he's suddenly got the whole thing already built! How did he find time to do that when he's been chasing down dead Joanna's notes?

John: Gerard (Judah Zachery) is certainly playing all of the players in Collinwood like a fiddle. Of course it sure seems like he's going to a lot of trouble to hatch a complex revenge plot. It really wouldn't be that hard for him to exact his revenge and stop the Collins bloodline in its tracks... of course we can't have that!
Christine: I'm surprised Judard did not show more interest in Quentin's time traveling stairway, considering that he could use it to go back in time and serve revenge to Amadeus Collins himself. The Pesky Fly returned to annoy Lamar and Samantha today. Have you noticed that the fly tends to show up whenever the witches are up to no good? Perhaps it's really Diabolos acting as the proverbial fly on the wall to ensure his followers are creating maximum chaos and distress. 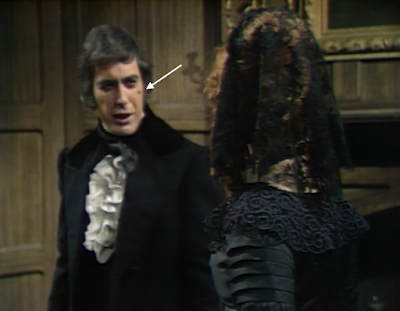 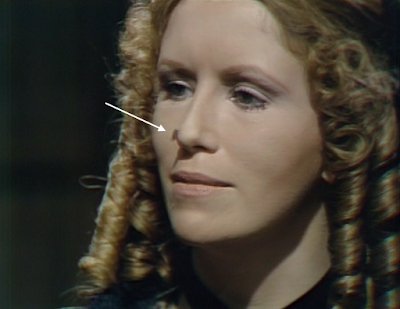