Angelique comes downstairs and introduces herself to Gerard. He looks at her, touches his forehead, and says that she was once named Miranda. She asks why he said that. He says he doesn't know. She asks who he is, and he tells her he's a friend of Quentin's that lives at Rose Cottage. He apologizes for disturbing her and leaves. 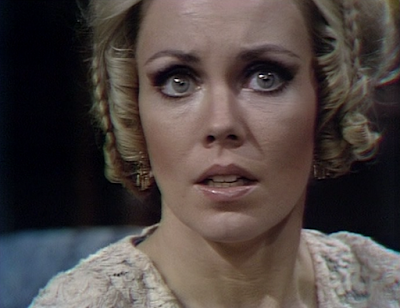 Angelique freaks out that someone called her Miranda for the first time in 150 years. She flashes back to being accused of doing Satan's bidding, and not bearing witness against Judah Zachery. She explains that she's afraid to speak of him to a tribunal. Amadeus Collins assures her that God will forgive her sins, and she will be immune from persecution if she helps them prosecute Zachery. She says she wants to do what's right, but even if she tries, she won't be able to. Amadeus says Zachery will not be allowed to look her in the eyes during the tribunal. She agrees to stand with God against Judah Zachery. 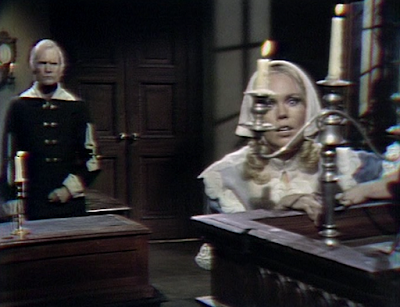 She then flashes forward to the tribunal, where Zachery is wearing a mask over his eyes, and charged with witchcraft. Miranda testifies against him. She tells how he used witchcraft to burn an enemy and his family. In a sudden outburst, Zachery calls her a liar. Amadeus declares him guilty of 109 counts, and sentences him to death. Zachery tells him that they cannot kill him, and he will have his revenge. He reaches up and removes his mask. He tells Amadeus that he and his descendants will regret this day. Back in 1840, Angelique wonders why Gerard called her Miranda. 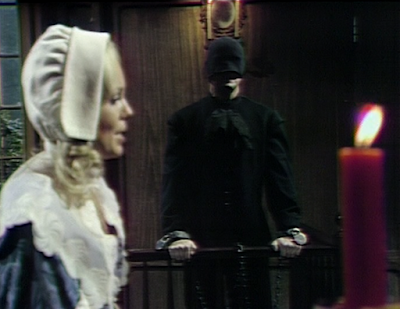 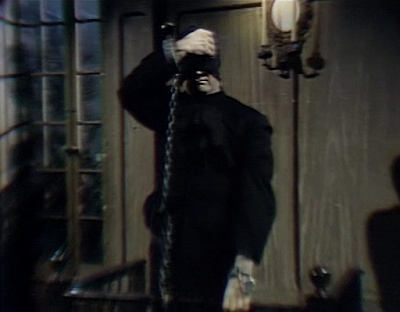 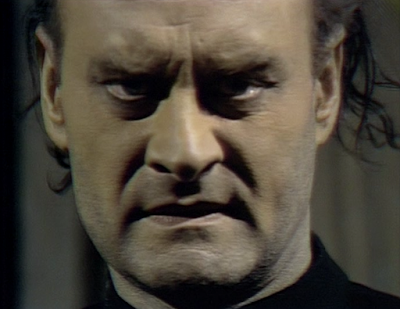 Gerard wonders why he called Angelique Miranda, and wonders who she really is. He walks over to Zachery's head and asks him why he doesn't tell him the answer. 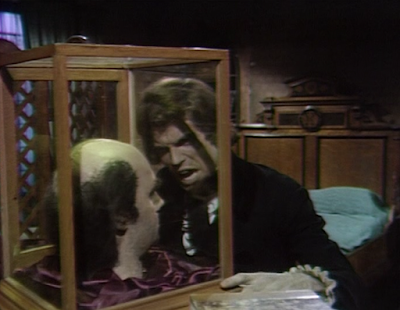 Quentin finds Angelique in the drawing room. She mentions having met Gerard, and asks if he has psychic powers. Quentin says he probably wants everyone to believe that. Daniel comes in and asks Quentin if he heard about Roxanne. He says her death reminds him of those he remembers as a boy in 1979. He asks Barnabas' wife if she remembers, and Quentin asks how Valerie would know anything about his childhood. Daniel apologizes for what he thinks must have been a mistake. Daniel leaves, and when Quentin goes to get a drink, he finds another note from Joanna. He asks Valerie if anyone had been in the drawing room. She says just he and Daniel, and Gerard was there when she first arrived. He excuses himself. 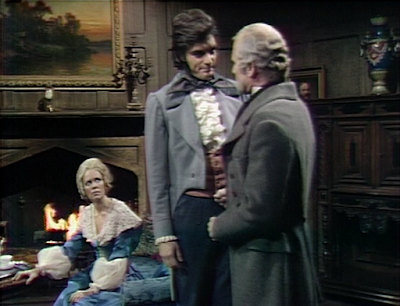 Gerard asks Zachery's head what it's doing to him. He then starts to laugh. He realizes he's the only one in the room with a functioning mind. He tells the head that whatever powers it has will soon be his, and Judah will do his bidding. 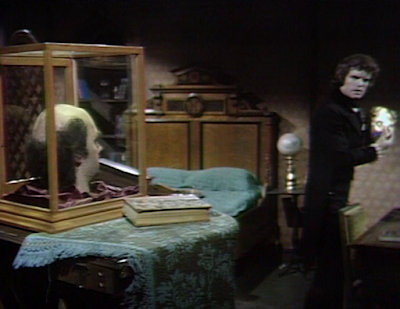 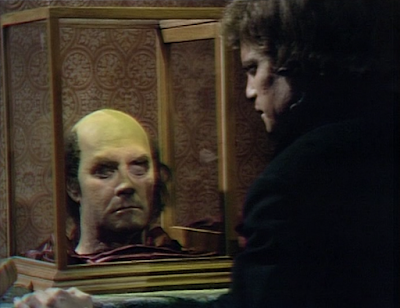 Quentin goes to the tree to find Joanna. He finds Daphne, and asks her what she's doing there. She asks him if she's done something wrong, and he explains that he thought she was someone else. She asks if he thought she was Joanna. He says yes, but she's not Joanna. He apologizes for getting angry. He points out that it's strange that she would arrive at that spot by accident. He asks her if she's happy at Collinwood. She says most of the time, and he asks what she means. She says that Mrs. Collins seems to resent her, and he tells her to let him know if she gives her any problems. He leaves her, and she pulls the gun from her purse. 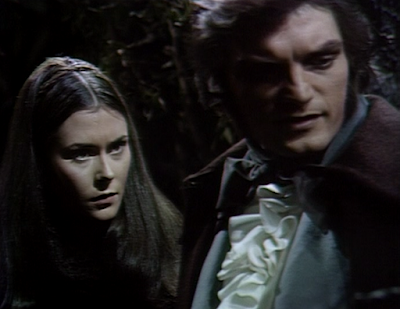 Gerard sleeps and dreams. He hears a voice calling him. It says he will find out what is to happen. He walks to the covered case where the head is, and inside, he sees his own head, and Zachery outside, looking at him. Zachery says that he is to become Gerard, and Gerard will become nothing. Gerard wakes up, upset by his bad dream. He sees the covered case, and walks to it. 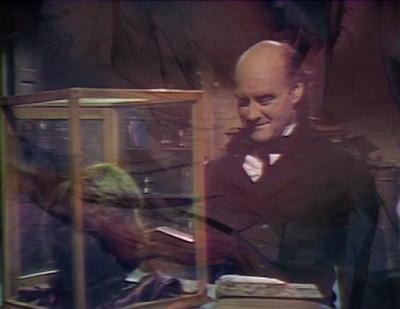 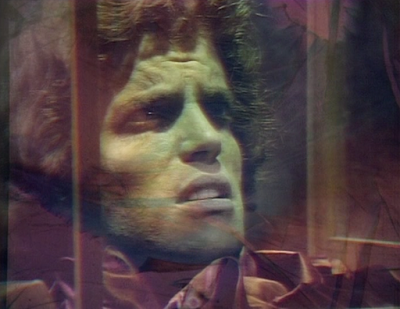 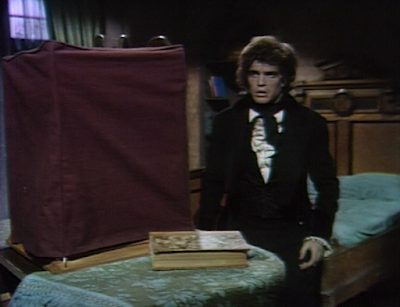 John: Did anyone else think that Miranda might actually be the one who taught Zachery witchcraft, as opposed to her being his unwitting disciple.
Christine: I'm not sure about that with all the talk of Judah being Satan's son and all powerful. It is interesting to consider that Angelique had a history before becoming Angelique and it may explain how she ended up in Martinique with a new name. It should be fun to see a confrontation between these two, and I wonder how Judah might exact revenge for her betrayal.
John: What's the point of having a mask on Zachery during the tribunal if he was able to reach up and remove it on his own? And if he could do so, why not remove it during Miranda's testimony?
Christine: I was under the impression that he was shackled to the railing, though it does appear that he's shackled to a long chain. It seemed that right before he removed the mask, his hand suddenly became free. While it's not entirely convincing, I think the fact that he couldn't remove the mask sooner was supposed to convince us that he was restrained, and it was only through his supreme Satanic power that he was able to free himself from his restraints. 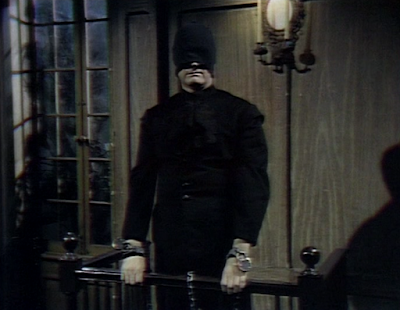 John: While I like disembodied head Zachery, and the fact that he has ties back to the Collins family that explain his wanting revenge, we find ourselves in another one of those questionable alternate time sequences where we can't help but ask how come the entire Collins clan wouldn't be aware of the curse the warlock Judah Zachery had put on the family back in 1840?
Christine: It could be because he didn't go on killing Collins family members, so the family may have assumed he was no longer a threat and there was no need to pass down the information. It seems that Julia and Barnabas may have already lost the opportunity to change events leading to the destruction of Collinwood in 1970 if Judah claims possession of Gerard's body.
Posted by John Scoleri at 6:00 AM