Daphne finds Trask sneaking out of Quentin's laboratory. He tells her that she had better forget what she saw. She says she intends to tell Quentin he was there. He asks if she's already in league with the Devil. He says she can tell Quentin that he found the weapon he used against Desmond, and he will bring the wrath of God down upon him, ridding the house of the witchcraft of which he has defiled it. He shows her the voodoo doll he found in Quentin's lab. Daphne doesn't believe him. She goes to find Quentin, and Trask leaves Collinwood. 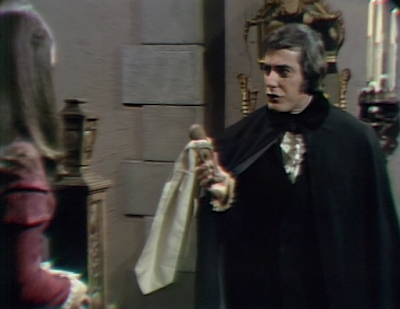 Daphne answers a knock at the door. It's Randall. He introduces himself and says he's looking for Quentin. She says she doesn't know where he is, and invites him to stay in the drawing room while she looks for him. He says she looks familiar, and asks her name. She tells him, and he doesn't recognize her name. Quentin arrives and Daphne starts to tell him about Desmond. She says Trask says he was dying, and then he made some statements she doesn't want to repeat. Randall says he'll go to Rose Cottage, and Quentin says he'll join him there shortly. In the drawing room, Daphne says Trask found a voodoo doll in his laboratory that he said Quentin used to harm Desmond. He asks where Trask went, and when she says Rose Cottage, he leaves. 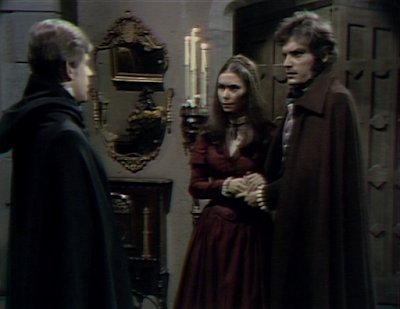 Trask visits Gerard, and shows him the voodoo doll, proving that Quentin is a warlock. Gerard seems unimpressed. He asks if that constitutes proof. He points out that it could have been planted. Trask asks why Gerard is so determined to defend him. Trask says the ascot is the reason Desmond is choking. Gerard says there's only one way to find out.

Trask and Gerard go to Desmond's room.  Gerard removes the ascot from the doll's neck and Desmond rises, wondering what's going on. He says he couldn't breathe. Trask asks how he's feeling now, and Desmond says the pressure on his throat is gone. Trask says he has the weapon that was causing it. He shows Desmond the doll, and Desmond says that he gave it to Quentin as a gift. 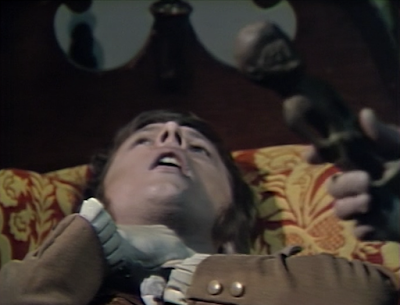 Quentin arrives at Rose Cottage. Randall says Trask and Gerard are upstairs with Desmond. He says Daphne cause Trask sneaking around his lab, looking for something he could pin on him. Randall suggests that he have Trask arrested for breaking and entering. Quentin asks Randall what he wanted to talk about, and he says he'd rather wait until after Quentin speaks to Trask. Randall says he feels like he has met Daphne before. They speak of Joanna, and Randall says he doesn't know or care if Quentin still sees her. Quentin tells him that Joanna committed suicide six months ago. He's shocked. He asks Quentin why she did it. He says he doesn't know, and adds that he was at sea when it happened. Randall realizes that he has met Daphne before — as a child. He says that she's Joanna's sister. He realizes Quentin already knows, and asks if Samantha is aware. Quentin begs him not to say anything. Randall assumes Quentin installed her in the house. Randall is terribly upset. He accuses Quentin of killing Joanna, and says he now wants to kill his younger sister. Randall warns him not to ruin her life. 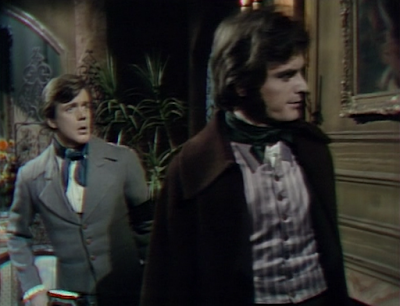 Trask comes in, and tells Randall that it's dangerous to threaten Quentin. Quentin warns Trask to stop his witchcraft talk, and tells him to stay out of Collinwood. Trask asks if he denies having a voodoo doll. Quentin says he has a voodoo doll, but it was in his room. Trask accuses Quentin of using it to choke Desmond. Quentin says he doesn't care what Trask thinks, and accuses him of taking the doll from his room and planting it in his lab. Quentin tells him that he wants the doll back. Trask refuses, saying that he'll use it as evidence against him. Quentin tells him to stay off of his property, and storms out. Trask shows Randall the voodoo doll. Randall asks Trask if he's going too far. Trask says he's going to the police with his evidence tonight, and asks Randall to support him. Randall says he's going to talk to others at Collinwood, and if he feels Quentin is guilty, he will go with Trask to the police. 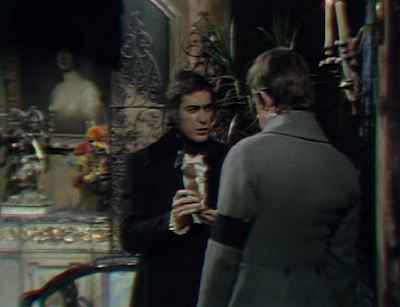 Daphne reads Gerard a note she received from Joanna. Gerard says the answer to where it came from lies in the supernatural. She says they held a seance earlier, and she thinks Joanna appeared. Gerard expresses concern for Daphne. He tells her that things are going to change for her, if she lets him help her. They kiss, but after a moment she pushes him away. She asks how he can claim to be Quentin's friend. 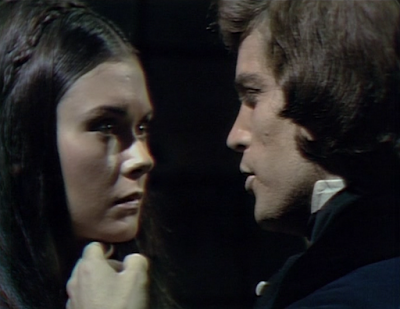 Quentin returns and tells Daphne that he talked to Trask. He asks her if something has happened with Gerard, and she says she received another note. Gerard leaves them. Quentin says he'll get to the bottom of it, and then asks her what happened while he was out. She says it's just the note.

Randall asks Desmond if he fought with Quentin earlier. He says he did, but he knows it's not Quentin. He says he thinks Gerard is responsible, but he can't provide proof. 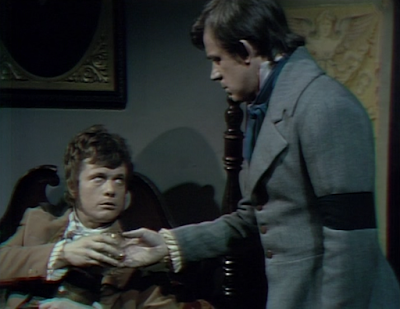 Randall sneaks into Gerard's room and snoops around. He finds a box in the bottom drawer of a desk, and opens it up to see the bejeweled mask. He hears someone at the door. 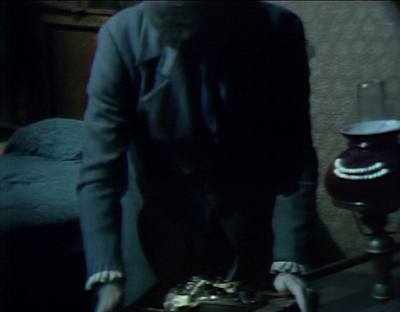 John: Is Daphne just playing games? Or does she really not know that Randall was her sister's beau?
Christine: It's possible she did not know since they were somewhat estranged and only communicating through letters. Also, Randall mentioned that she was still a little girl when he last saw her, so it could be she was too young to really remember.
John: It sure seems like Gerard's treachery can't stay in the dark much longer. And while we know he's currently possessed by Judah Zachery, it sure is hard to separate where one man ends and the other begins, because we knew Gerard was one sketchy dude well before he was possessed.
Christine: I think the fact that Gerard was of low moral character made him ripe for possession by an evil entity. Without Judah he was simply a no-good scoundrel, but with him, he is much more malicious and dangerous.

John: Randall is an interesting character. He maintains a certain amount of skepticism even in the face of mounting evidence of the supernatural existing. Do you think he knows what the bejeweled mask is, and where it came from?
Christine: Randall is full of surprises, so he may know something about the mask, but may not live to tell about it if he does.
Posted by John Scoleri at 6:00 AM