Quentin bursts into the drawing room and tells Daphne that he knows who she is — the sister of Joanna Mills. She doesn't say anything. He tells her that she knew who he was when he held her in his arms earlier. He says if that means anything, she has to tell him the truth. She doesn't say anything, and he tells her that she has an hour to get out of the house. She admits to being Joanna's sister. He says he knew it was true, yet he hoped there was a mistake. She says there was no mistake. He asks if she came to drive him mad out of revenge. He says he doesn't need someone else to punish him. She admits that she came to kill him for causing her sister's death. He says that he loved her, too. He explains that he tried to divorce Samantha, but she wouldn't let him. He says Joanna deserved someone better. 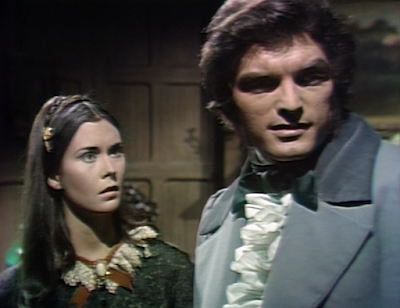 He asks Daphne if she's so young that she doesn't know love. He says Joanna wouldn't have resorted to the kind of revenge that she has. He says it would have been better if she had just killed him rather than leaving Joanna's letters around. She asks what he means. He tells her not to deny it. He looks at her and says that since she came to the house, every three days he has received a letter from Joanna. She asks if that's why he snatched her letter from her. He describes the notes, which were in Joanna's handwriting. Daphne points out that she's dead. Quentin says that either someone else is doing it, or Joanna's spirit cannot rest. Daphne says she wanted to grow up to be like her sister. She said her sister wrote of Quentin, but didn't mention he was married. When she found her in the sanitarium, she spoke of Quentin endlessly. She hugs him and tells him she's been so wrong about him. She apologizes. 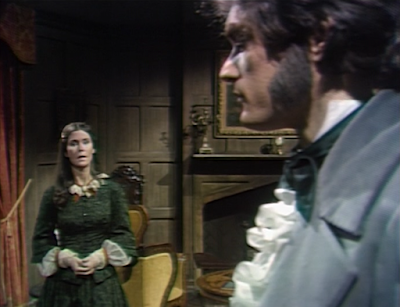 Gabriel interrupts them and marvels at how quickly they've gotten to know one another. He asks them if he should leave. Quentin tells him he can do as he wishes, and suggests that Daphne go to her room. Gabriel tells Quentin that she's pretty, and he responds that Gabriel shouldn't start imagining things; he was just comforting her. Gabriel says he knows Quentin has already had a roving eye. Quentin tells him to stop. Gabriel changes the subject and asks what ever happened to Joanna Mills. Quentin tells him that she's dead. He asks Gabriel if he knows anything about any letters. He asks what letters. Quentin suggests they remain close, like brothers. Gabriel says he won't say a word about what he saw tonight. He then brings up Julia's disappearance. 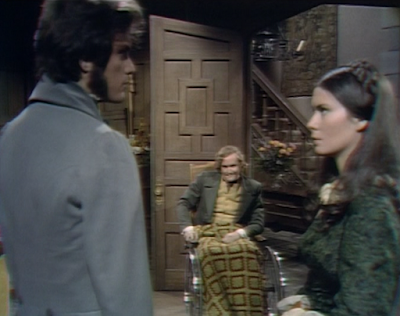 Laszlo checks in on Julia. He holds up a cross, which she asks him to give to her. She says that Roxanne will kill her. He says she'll have eternal life after she dies. Julia asks for the cross, saying it will stop her. He asks her for $1000, and she says she'll give it to him. He says he'd have to let her go, first. 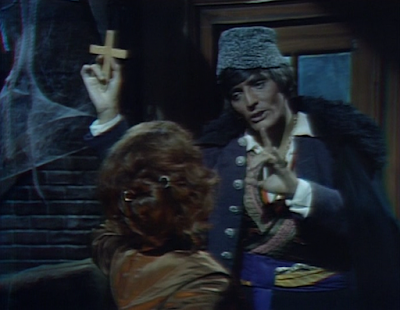 She tells Laszlo to go see Barnabas, who will see that he gets whatever he wants. He says it wouldn't be fair to Barnabas. It's too late for her. Julia passes out, and Laszlo takes a ring from her finger. He leaves, and Julia calls out to Barnabas. 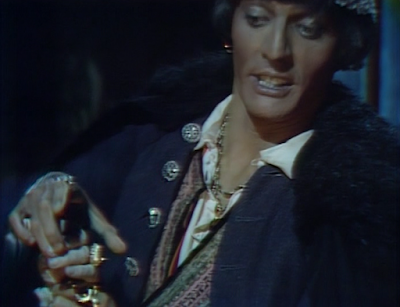 In the drawing room, Barnabas hears wolves howling. Gabriel asks if he's worried about his sister. He asks what the police said, and he says that they're equally mystified what happened to her. Gabriel asks Barnabas if Julia has any enemies. Barnabas says he's afraid that by the time they find her, she'll be dead. He leaves to resume the useless search. 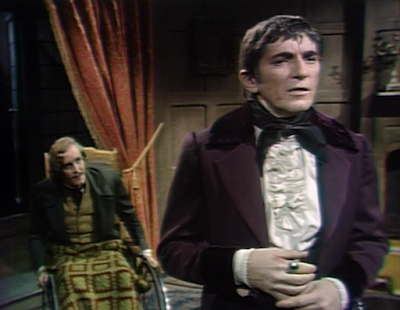 Daphne returns to the drawing room where she runs into Gabriel. He says he received the official word that Quentin was just trying to comfort her. She tells him he's a very suspicious man. He asks her if Quentin has taught her of the black arts, and if she's a member in good standing of his coven of witches. She says he's fantasizing, and he says he wouldn't be surprised to find out that Trask is a member. He asks if she's been to Quentin's laboratory. He tells her to watch out for unusual dreams, because that's a time honored way for a witch or warlock to steal her soul. She admonishes him for making such accusations about his own brother. He reminds her that she's a governess in the house. She excuses herself. 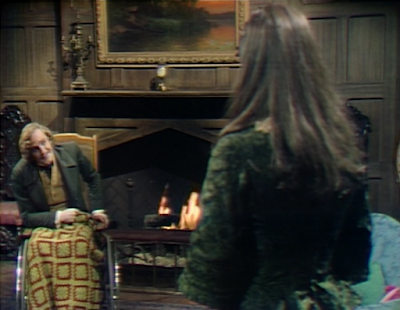 Laszlo breaks into the old house and calls out for Angelique. Barnabas asks him what he's doing there. He asks if he came to steal. Laszlo says he came to leave a message for Barnabas Collins. Barnabas reminds him that they met before, and he knows who he is. Laszlo says a man wants to meet Barnabas at midnight at the Eagle. Barnabas asks him to describe the man, and he says he's tall, and well-dressed. Barnabas asks if the man is heavy-set, with gray hair, and Laszlo confirms that he is. Barnabas tells him that there's no such man. He asks what he really wants. They struggle and he notices that Laszlo is wearing Julia's ring. He realizes that he's Angelique's servant, and demands to know where Julia is. 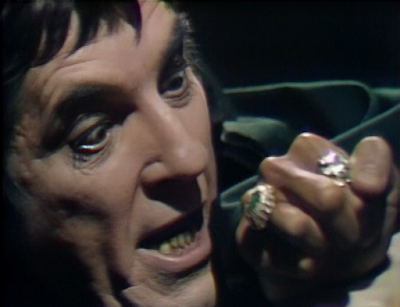 Quentin asks Daphne why she won't look at him. She says there are many reasons. He asks if Gabriel told her anything. She says Gabriel hates him, and she doesn't know what to believe. He tells her to believe what he told her yesterday. He reminds her that Joanna is dead, and she says she can't take her place. She then sees a note on the desk addressed, 'sister.' Quentin says it wasn't there when he came in. She can't read it, so he does. It urges her to take her chance, and not follow her path. Daphne runs upstairs. 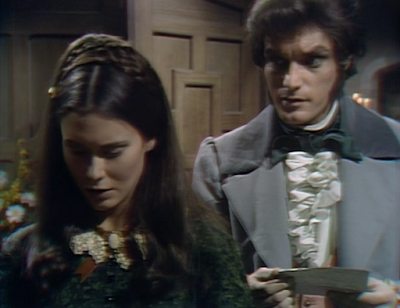 Barnabas arrives at the lighthouse and finds Julia unconscious. 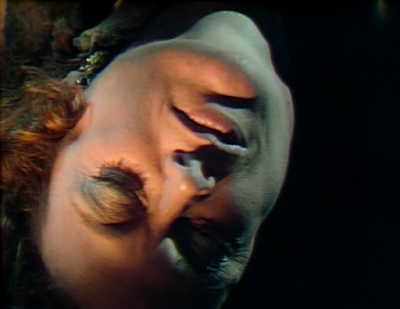 John: Filed under plot holes better left unexplored — just how did Daphne manage to insert herself into a governess position at Collinwood to exact her revenge? Was it dumb luck that she decided to come kill Quentin right after the mysterious murder of Hortense? If Quentin hadn't forgotten about the prior governess so quickly, he might at the very lest find the timing of her murder and Daphne's arrival as more than a mere coincidence.
Christine: She was lurking around Collinwood in Episode 1122 before Hortense was murdered, but it may have worked to her advantage to be in the right place at the right time to be offered the position. Too bad she didn't heed Julia's warning not to take the job in Episode 1129 or she wouldn't find herself in the position of being possessed by evil Judard, tormented by Gabriel, and pawed over by Quentin, who is still married.
John: Pretty impressive how Barnabas knows there are no tall, well-dressed, heavy-set gray-haired men in Collinsport. That sounds to me like it could pass for a Stokes or Petofi (or anyone else portrayed by Thayer David!).
Christine: Who do you suppose is writing the Joanna notes? Clearly it has to be someone who knows Daphne is her sister, even though it is a strange way to address a note. It could have been picked up by Samantha, assuming her own dead sister was writing to her. 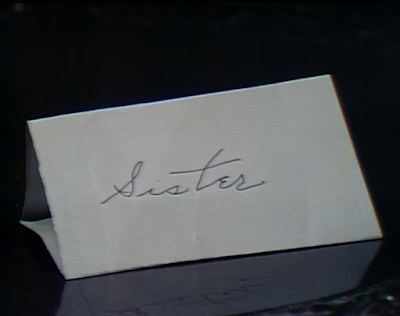 John: Do you think Barnabas did away with Lazlo? On the one hand, it would be nice to know he got his just desserts, but if he dispatched him offscreen, I'm going to be very disappointed!
Christine: Chances are good that Barnabas did away with him once he told him where to find Julia. On the other hand, he may have let him live to suffer the worse fate of facing Angelique's wrath. 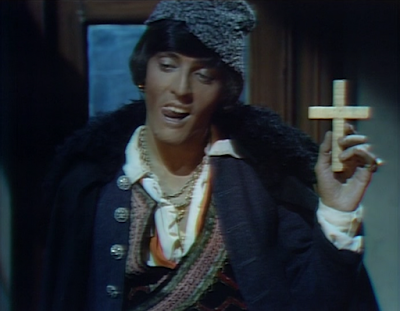