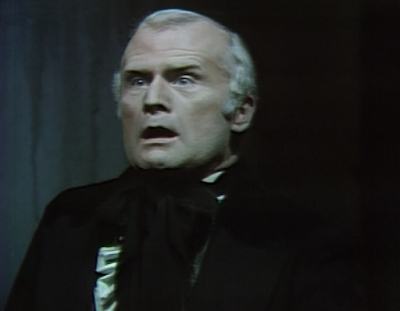 From the staircase, Daniel describes seeing Lorna being strangled by Quentin. He falls, clutching his chest, saying that Trask was right — Quentin is a warlock and a murderer. Gabriel wheels in and asks Gerard what he's done to his father. Gerard says that Daniel has had an attack, and sends Gabriel to get a doctor. 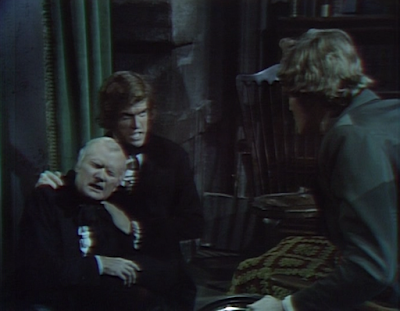 Quentin is drinking in the drawing room when Daphne comes in. He asks her how she always seems so calm and tranquil. He flirts with her, and asks if she's frightened of him. He says that she never seems to listen when he speaks to her in a personal way. He describes her as angel among gargoyles. He tells her that his father killed his mother. Gerard comes in and tells Quentin that his father had an attack. 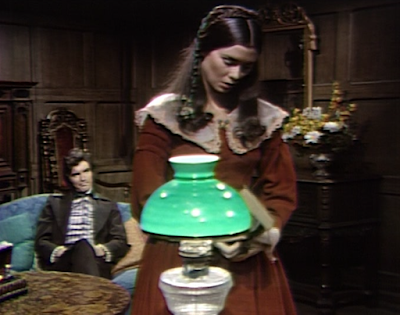 Daniel lies in bed moaning. Edith checks on him, and he tells her to leave. She explains that Gabriel has gone to get Julia. Daniel asks, "Why, Quentin..." Quentin comes in, and Daniel says he's not the man they thought he was. Edith sends the others away as Daniel and Quentin yell at her to leave, too. Daniel tells Quentin that he saw the stairway, and he saw him kill Lorna. He passes out. Gabriel wheels in and says he can't find Julia. Quentin leaves to find another doctor. Edith tells Gabriel that Quentin did something Daniel didn't like. Gabriel tells her to put on a black dress, and she says he's not going to die. Gabriel says not while the will is the way it is, but sends her off, explaining that they are going to sit with his father tonight. Daniel asks about Quentin, and Gabriel explains that he left, but he's going to stay with him. 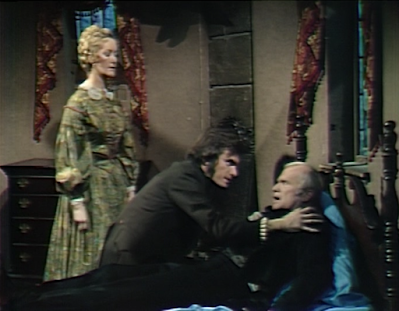 Gerard finds Daphne in the drawing room. She gets up to go to her room and he stops her, He apologizes for not showing up for dinner the other night. He tells her that she will give him another chance, and she refuses. As she leaves, he says that she will become one of them.

Daphne writes in her journal that she feels sorry for Quentin, but she must guard against it.

Gerard takes something of Daphne's, and holds it up against his Devil's sigil. He calls to her, saying her eyelids are becoming heavy, and she will sleep. He says she will see the future she will share with him when she sleeps. 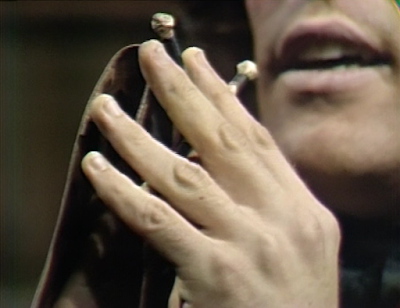 Daphne gets up from her desk and lies on her bed. She dreams of Gerard lighting candles. She comes to him and kisses him. He asks her to come with him, and she says she will follow him anywhere. He asks if she will do his bidding, and she nods. He tells her to come to him tonight in the gazebo. As he leaves, she gets upset, and wakes, speaking his name. 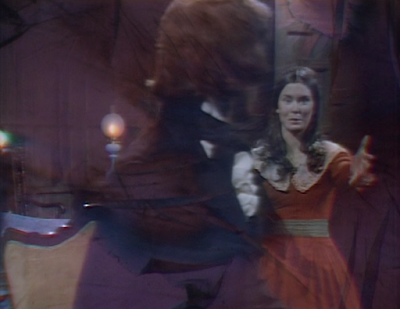 Gerard says Daphne will wake and remember nothing, except in the darkest part of her mind. Daphne walks in, saying she forgot her books. He starts to make a move on her and she rushes out. He laughs as Edith walks in. She says the house needs a good laugh. He says that's just what she needs, and she adds, "and a couple of other things." He grabs her and kisses her. She pushes him away, saying he treats her like a servant girl. He tells her that he's changed. She tells him he only plays games. He asks if she'd like to understand his games. She tells him yes. He asks if she's good at keeping secrets. She's intrigued. He tells her to do as he does, and he will give her powers, and teach her how to use them. 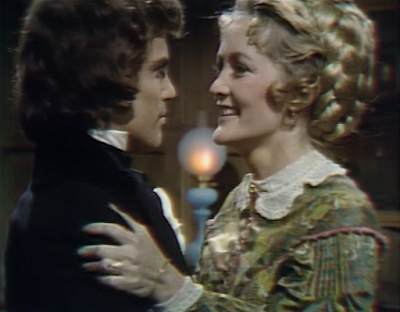 Gabriel rolls in and calls his wife. He tells Gerard to go to see his father. He then points out that Edith loved being touched by Gerard. By anyone but him. He says it's her own fault he doesn't touch her, since she hates him. He tells her that she can't ruin what's about to happen to them. He says that Trask has convinced his father that Quentin is involved in the black arts, and Daniel can change his will. Edith says he'll screw it up, like always, and calls him a cripple. He admits that what she married, and that's all she has to depend on. She counters that she has herself. 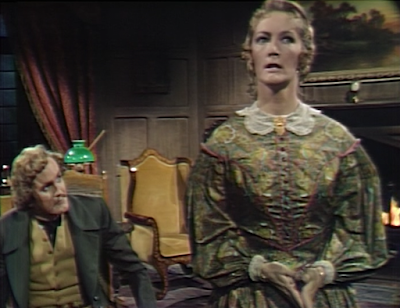 Quentin tells Daphne that another attack could be fatal for Daniel. Daphne offers to sit up with Daniel until Edith returns.

Gerard stands at the base of Quentin's staircase. Quentin comes in and asks what his father could have seen, since he didn't kill Lorna. Gerard says it may just have seen what Trask was saying. Quentin says he's established a pattern of receiving letters every three days, at one of two times per day. He tells Gerard to come with him. 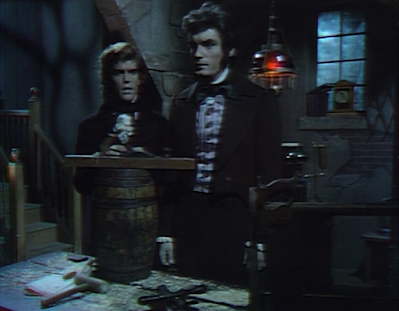 Quentin and Gerard make a large scene about leaving to go to Rose Cottage. After they leave, Quentin sneaks back in to the drawing room, and watches the door. After a while, Daphne opens the door with a note in her hand. 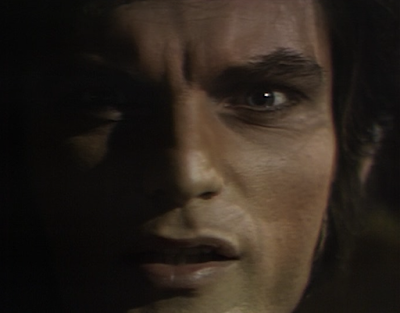 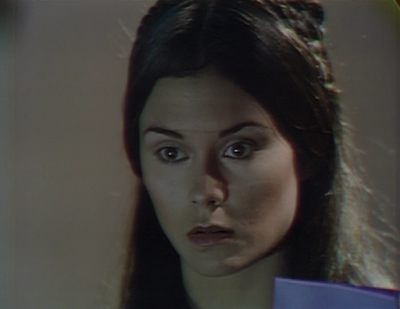 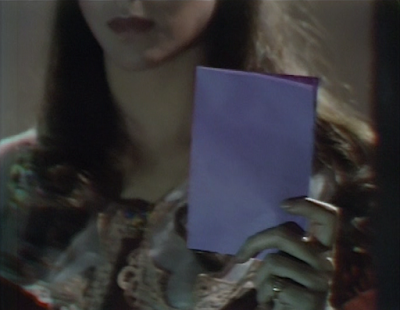 John: I'm beginning to realize that they only needed head and headless body actors for Judah Zachery because unlike Count Petofi and the like, the rest of Zachery's time on the show seems likely to play out in the body of other characters.
Christine: Yes, but just like Petofi using Quentin's good looks to take advantage of the ladies, we still know this is the guy hiding behind the pretty face of Gerard Stiles. 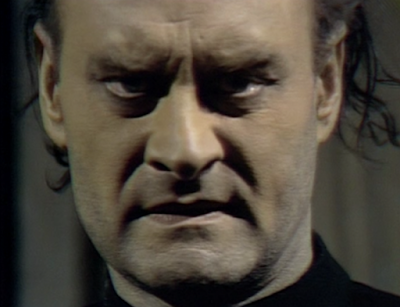 John: It seems that Gerard has all of the ladies of Collinwood wrapped around his finger... how is it that none of them seems to be aware of his covert relationships with all the others?
Christine: Daphne was aware he was running around with another woman in the dream he sent her. I imagine Edith doesn't care as long as she can get her groove on with Gerard.

John: It wasn't a particular surprise to find Daphne leaving the notes for Quentin, but the question as to why still remains — is she Joanna's sister? And if she is, won't Randall recognize her?
Christine: I'm guessing she has to be a close relation who was living apart from Joanna, which would explain why Randall may not know her. With Quentin putting the moves on her and Judard manipulating her in her dreams, it seems we have the beginning of a love triangle that may lead to the destruction of Collinwood in 1970. 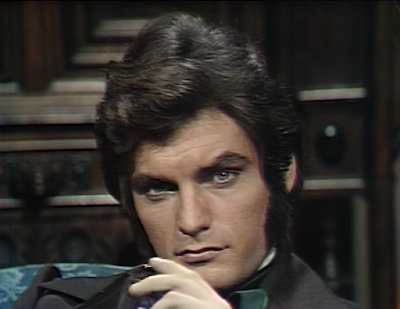 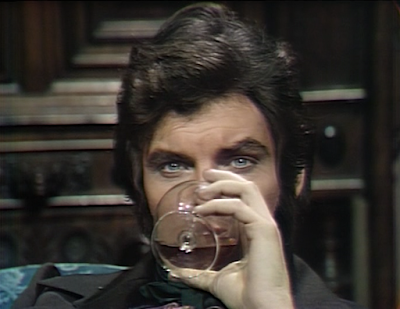