Angelique walks into a room with Julia lying in a bed, and tells her that she's in an old lighthouse that she had Roxanne bring her to. She explains that she's going to let Julia die. Julia asks about after she dies, and Angelique says that she will become a vampire. She adds that in her new existence, she'll be closer to Barnabas than ever before. Julia tells Angelique that she'll never have Barnabas, and she replies that neither will she, nor any other woman. 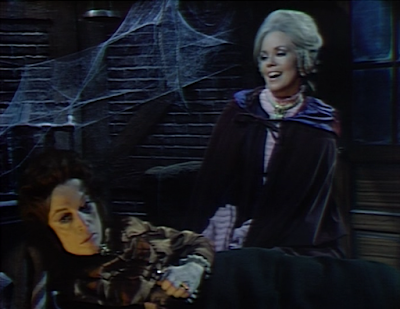 Barnabas arrives at Collinwood and finds Quentin in the drawing room. He explains that he's looking for Julia. Quentin tells him that she left before dark. Barnabas expresses concern, and asks him to let her know he was looking for her if she returns. 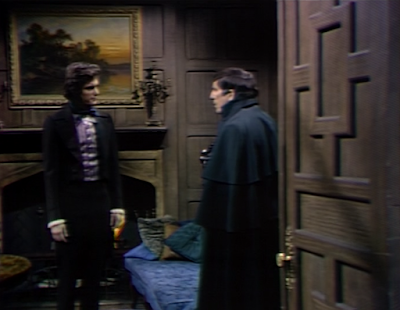 Quentin answers the door at Collinwood, letting in Gerard and another man. Gerard introduces the man as an old friend, Charles Dawson. Quentin invites them in for a drink. Dawson is impressed with Collinwood. Gerard explains that Dawson is a lawyer. Gerard asks for permission to show Dawson around the house, and also says that he has something for Daniel. Quentin says that his father is in his study, and leaves them. Gerard tells Dawson to study Quentin well, as he will be the instrument of his vengeance. He says as Judah Zachery was beheaded in 1692, so shall Quentin Collins be in 1840. Dawson says it's too bad — he seems like a friendly chap. Gerard explains that every last Collins must pay, and the Collinwood will be all his. 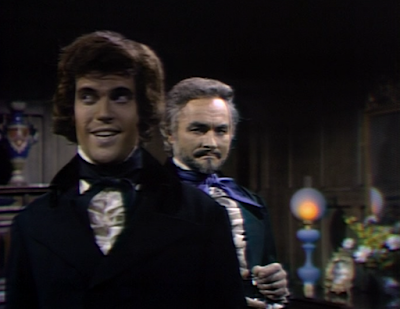 Valerie comes in and Gerard introduces her to Dawson. He offers to fix her a drink. Gerard apologizes for running out on her when they first met. Daniel comes in and tells Gerard to join him in his study. They leave Dawson and Valerie alone together. She asks if he and Gerard have known each other a long time. He says they have. She says he fascinates her, and asks him to tell her all about them. 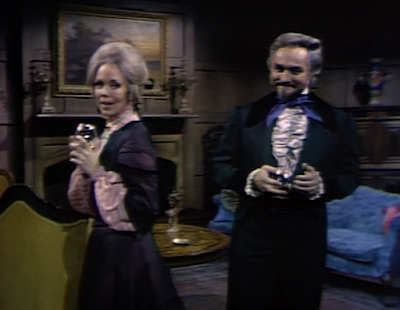 Gerard hands Daniel his horoscope. Daniel says Gerard told him it would explain what he should expect in the future. Gerard says the sum of the substance is that Daniel will live a long and fruitful life. He adds that in the future, he will become disenchanted with someone very close to him. Daniel asks who, and Gerard tells him the horoscope doesn't provide those kind of details. 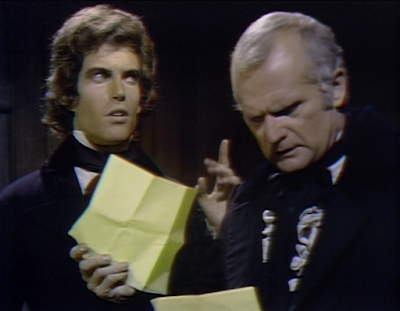 Dawson says Gerard must have made an impression on him in the one time they met. Barnabas bursts in and asks to speak with Valerie immediately. Dawson leaves them, and Barnabas says he doesn't need to tell her why he's there, and she says he must, because she cannot read his mind.

In the foyer, Gerard asks Dawson where Valerie is, and he explains she's in the drawing room with her husband. He says he has something for him to do, and asks him to go to the old house.

Barnabas demands that Angelique tell him what she's done with Julia. She laughs off his threat. He says he knows she stopped her from killing Roxanne. Angelique says that Julia must have arrived too late. Barnabas agrees to do anything she wants if she lets Julia go unharmed. Angelique tells him that Julia knows too much, and not just about him — about her. She says he only has himself to blame, and starts to leave. He grabs her when Gerard walks in. Valerie tells him they were just discussing an unimportant family matter. She asks why Daniel was so excited to see him this morning, and Gerard says he prepared a horoscope for him, and offers to do the same for her and Barnabas. She says she'd like that, and leaves them. Gerard asks Barnabas where he met his wife, and he says England. Gerard points out that she's not English, and Barnabas excuses himself and rushes out. 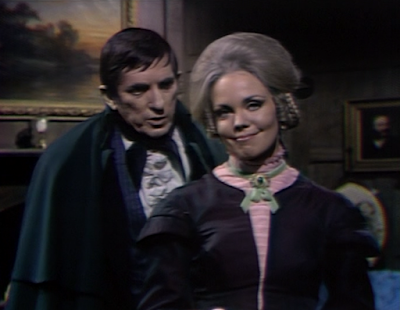 Quentin finds Gerard and tells him he has agitated his father with the horoscope. Gerard apologizes. Quentin also apologizes for getting angry. Dawson comes in and says he stepped out for some air. He says he'd love to explore the grounds during the day. Quentin tells him he can come anytime, and adds that Gerard should come by the house tomorrow at 7 for a surprise.

Quentin leaves them and Dawson tells Gerard that he searched her room and found nothing to connect her to the supernatural. Gerard says that if she's Miranda, the woman who betrayed him, she'd be foolish to leave evidence lying around. Dawson points out that she lived 150 years ago, and Gerard reminds him that he (Zachery) did, too. He says they'll find out all about it this evening. Dawson says if Valerie is Miranda, it will be difficult to prove. Gerard says she'll prove it herself. Dawson says if she is alive, she may have abilities of her own. Gerard asks if he thinks they're more powerful than his, and Dawson says he wouldn't put it that way. 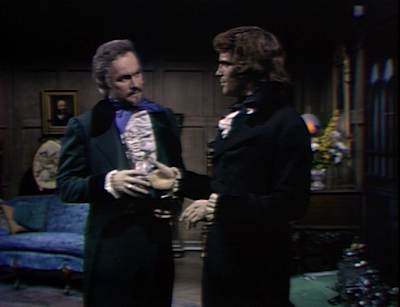 Angelique tells Julia not to try and speak. He says that Barnabas is searching for her, but he will not find her until it's too late. She says then they will be much more like brother and sister than they are now. She tells her goodbye. 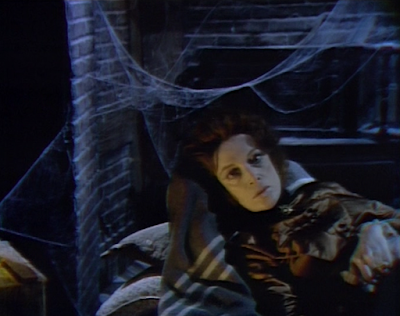 Dawson and Gerard hide in the drawing room, waiting for Valerie. She comes in the front door, and Gerard does a ritual over a candle.

The lights dim over Angelique. She starts upstairs, and then hears a voice calling Miranda. At the top of the stairs, she sees Amadeus, telling her that she has nothing to fear in the courtroom, immune from prosecution if she testified against Judah Zachery. She tries to banish him from the face of the earth. He disappears. 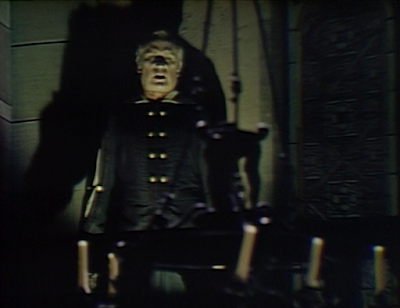 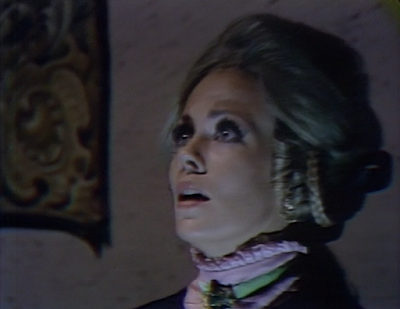 Gerard smiles, saying he knows who she is, and pointing out that she doesn't know who he is. He says he will have the final satisfaction of destroying her. 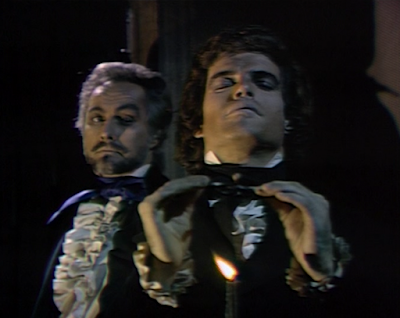 John: I always hate when they avoid closing out a cliffhanger because one of the players has the day off. I was really hoping to witness Roxanne's encounter with Julia. Instead, we have to get the story from Angelique, who also had her spirited away to a lighthouse somewhere in Collinsport.
Christine: I was more bothered by the fact that Angelique was able to claim power over Roxanne without much explanation. It was still upsetting to have Julia held by Angelique to become vampire food for Roxanne. Hopefully, her loyal "we're just friends" pal will find her before it's too late.
John: Ugh. More horoscopes? I thought we had finally left all that silliness behind us. And it's almost a surprise that they would have that come via Gerard, rather than an 1840 incarnation of Sebastian Shaw. If I gave the writers more credit, I'd say they were planting the seeds of horoscope watching in 1840 that would follow vampiress Roxanne Drew into the future...
Christine: I don't know about you, but I can't wait to find out about the origin of the zombie pirates!

John: It's almost getting difficult keeping track of who's really who. Gerard is Judah, Valerie (Angelique) is Miranda... Barnabas is thankfully Barnabas... and unfortunately Dawson appears to be nothing more than another lawyer hanging out with folks who dabble in the black arts so they think they're cooler than they really are. I was really hoping we'd get more of a Nicholas Blair relation, with his own connections to the underworld. All that said, I look forward to seeing how this all works out.
Christine: I wonder if Dawson might change his name to Evan Hanley in the future. Roxanne has really got a huge set of chompers on her. She always leaves the biggest, goriest holes in her victims' necks. 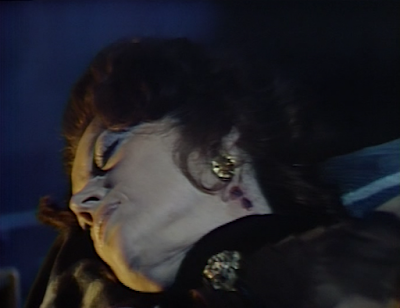