Randall sneaks into Gerard's room and snoops around. He finds a box in the bottom drawer of a desk, and opens it up to see the bejeweled mask. He hears someone at the door. It opens and Edith walks in. She asks where Gerard is, and then asks what he's doing there. He turns the tables on her, asking what she's doing there. She says she came with a message from Gabriel. He points out that she's a modern woman, coming to a man's bedroom. She uses Gabriel's disability as an excuse. He asks if Gerard and Gabriel are friends, and then asks her if she knows Gerard better. She says she's done nothing wrong coming there, and asks him again what he's doing. He tells her that he's curious. He then asks Edith how his sister felt about Gerard. He then follows up asking her how well Gerard knows Quentin, and he's surprised to hear that they are the best of friends. They agree not to mention running into each other to anybody. 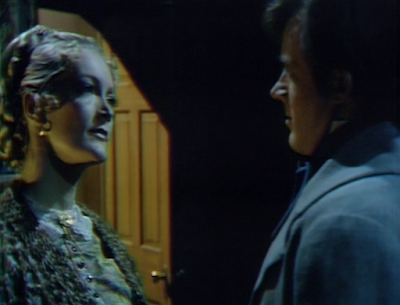 Gabriel looks around Collinwood for Edith when Mr. Grimes comes looking for Quentin. When he hears that he isn't there, he says he'll go straight to the constable. Gabriel asks him if it's a serious matter. He invites Grimes in to wait for Quentin. Gabriel asks how things are at Weatherby Farm. Grimes tells him that he's not planning to sell them his land. Gabriel says Grimes' cows broke through the fence yesterday, and Grimes points out that they're all dead. 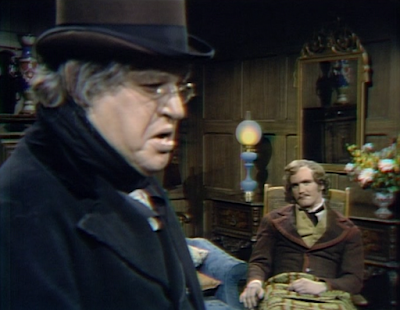 Quentin arrives and addresses Grimes. Grimes accuses Quentin of being responsible for his herd of cows being killed. Quentin asks if he's been talking to Trask. Grimes says the whole town knows. Quentin pushes Gabriel out of the drawing room. Grimes says there was nothing wrong with his herd when they died. He lists off all the strange phenomena that has been occurring in Collinwood,  Quentin denies having anything to do with it. He tells Grimes to get out. Quentin threatens him, and Gabriel laughs as Grimes runs out. 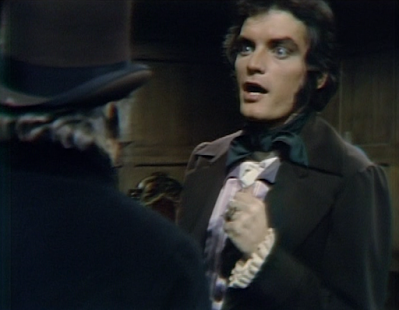 In the woods, someone follows Grimes. He hears someone following him, and calls to Quentin, saying he's prepared to fight him. He pulls a gun and fires. Randall appears and asks Grimes what he's doing. Grimes tells him to follow him. They find a paper with the Devil's mark stuck to a tree with a knife. Grimes says it's a warning Quentin left for him. Randall asks him if he's sure it was Quentin. Grimes tells Randall to get his sister out of the house while he still can. 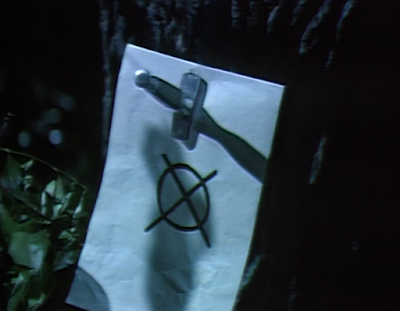 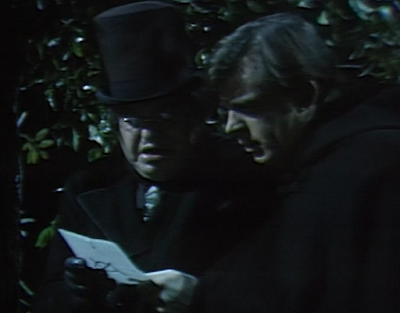 Edith is sitting by the fireplace when she hears someone coming. She hides in the shadows as Gerard comes into his room. She asks him where he has been. He tells her to nevermind. She asks if he's going to be nice to her, or awful as he is sometimes. He kisses her, and then walks away. She tells him she can't stand it at Collinwood anymore. He says she took a big chance coming to his room, and she says he should be glad she did. He asks what she means. She tells him she caught Randall in his room, at his desk. Gerard sees the case with the mask has been opened. She asks him what's in the box, and he tells her she'll find out one night soon. She reminds him that she'll do anything for him. He tells her to go to Collinwood and find out who Randall has talked to.  He says he's going to go to the village to see if Randall is still at Trask's. He kisses her once again, and then sends her away. He hides the box with the mask. 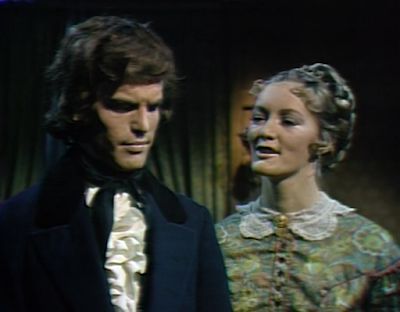 Gabriel is in the foyer when Edith returns to Collinwood. He asks where she has been, and she says she was at the old house. He asks if Barnabas is the new object of her devotion. She asks him if Randall has been there, and Gabriel says he is more her type. She goes to ask someone else. He grabs her hand and says they're going to have a chat about why she went to the old house. She admits that she did not go to the old house. 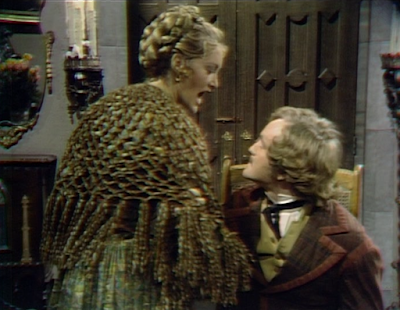 Randall comes in and asks them to tell them exactly what is happening in Collinwood, showing them the paper with the Devil's sign. He says it was left as a warning to Grimes. Gabriel dismisses it. Randall says Trask was right that there was something supernatural about his sister's death. He says tonight is the final proof — Desmond's attack through Quentin's voodoo doll. He asks how close Quentin is to Gerard, and Gabriel says very close. He says he's going to the police to meet Trask, and Gabriel tells him he admires how he can step outside his family and harm his sister, nephew and brother in law. He tells Gabriel he has no choice, and leaves. 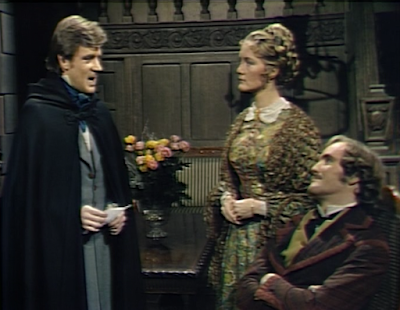 Edith is excited to think Quentin might go to jail. Gabriel says if that happens, he has many plans. He asks her why she was asking if Randall was there. She makes up a story about Samantha. Quentin comes in through the back door. Gabriel tells him that Randall is meeting up with Trask to go to the police, because they think he is a warlock. Quentin goes out after them. Gabriel sends Edith up to bed. 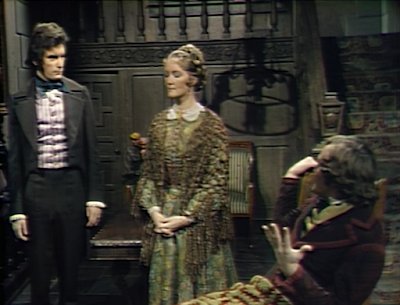 Randall waits in the woods for Trask. He hears someone approaching. He's surprised by who he sees. A gloved hand grabs Randall's throat and chokes him. The man stabs another piece of paper with the Devil's mark into the ground next to Randall's body. 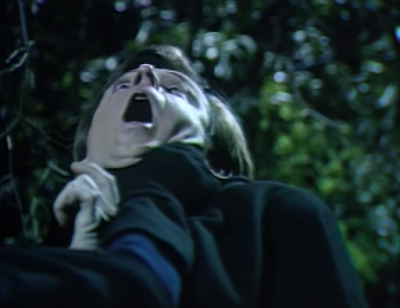 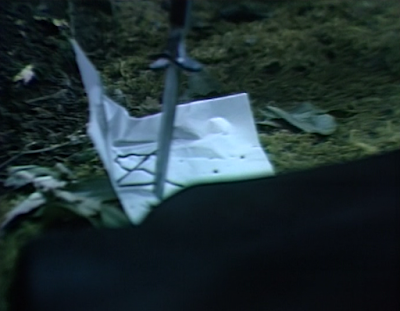 John: Who is this Grimes who appears to have arrived out of a Charles Dickens novel?
Christine: It was about time Thayer David showed up in 1840 to assume the role of Mordecai Grimes! 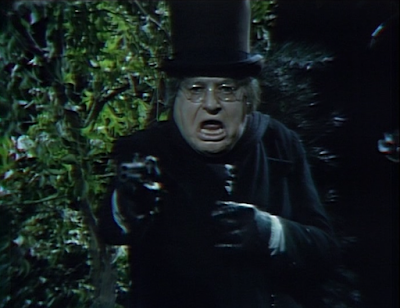 John: I love how Randall reluctantly admits there was something supernatural about his sister's death. Oh, your vampire sister who disintegrated when you kept her from he coffin while the sun rose? Supernatural? Really?
Christine: That did not make a whole lot of sense, though I assume the supernatural aspect he's citing referred to how she became a vampire, which was instigated unconventionally by witchcraft.

John: Place your bets on the mystery man! I guess there really aren't too many choices. It seems pretty obvious that it has to be Gerard... but maybe, just maybe, the writers have another trick up their sleeves.
Christine: You never know. Sometimes they make us think that it couldn't be the obvious choice and it turns out to be the obvious choice, though every now and then they hit us with something completely unexpected. Let's hope for the latter this time.
Posted by John Scoleri at 6:00 AM