Gerard enters the secret passage in the graveyard and examines Zachery's body, and watches as lightning strikes and the body begins to convulse. He removes the mask and smiles. He doesn't see Zachery's eyes open, but he does notice when he sits up and gets of the operating table. Gerard knocks over a lamp, starting a fire. Zachery approaches him, arms outstretched. He then starts to cough. Gerard manages to escape, leaving the body in the burning room beneath the cemetery 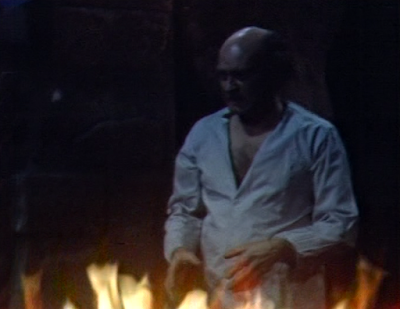 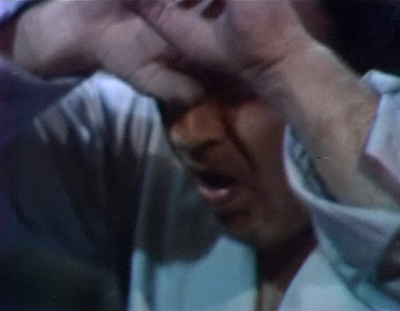 Barnabas tells Julia that Leticia said Zachery is dead. Julia says she can save him.

Zachery is surrounded by fire. He finds the mask and puts it on. 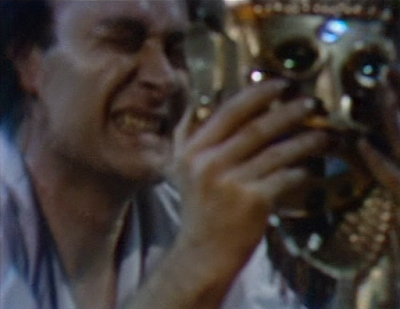 Julia tells Barnabas that Judah is dying, and she has to go to him. She gets up and stops, saying his body is burning. She then comes out of her trance and tells him that it's over. Barnabas says that she managed to destroy Judah Zachery. She said she had to do whatever he said. Barnabas says they must confirm that he has been destroyed. 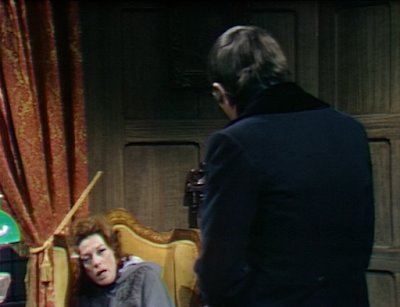 In the cemetery, Barnabas says that Zachery must be dead, or she'd still be under his power. They step into the secret passage and find the place in shambles. They see a body buried under rocks. Julia says that ether must have exploded based on lightning. She wonders where the mask is. They leave the body buried under rubble. 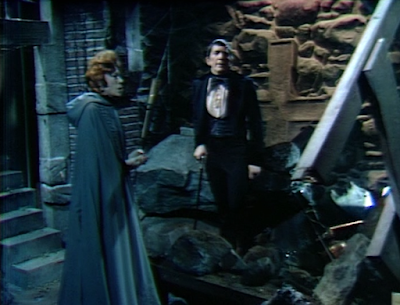 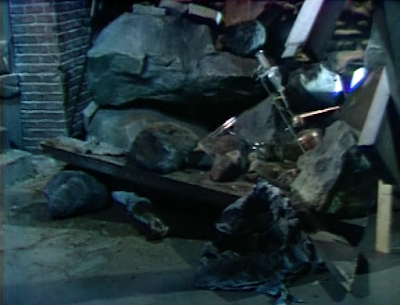 Barnabas tells Julia to close the grave, and she pulls the lever to do so. He says that it is now Judah Zachery's tomb.

Roxanne reads a note from Barnabas that explains she's fortunate that he will be staying with his wife. Trask stands over her, pointing out that she was completely absorbed in her letter. Trask tries to make moves on her while she's vulnerable, but she won't have anything to do with him. He says he's honored she's confiding in him. She says if her father hadn't forced Trask upon him, things might be different. He tells her that his happiest moments have been with her. He reminds her that she could come to love him. She tells him that she doesn't love him. He assures her that he can make everything different if she marries him. 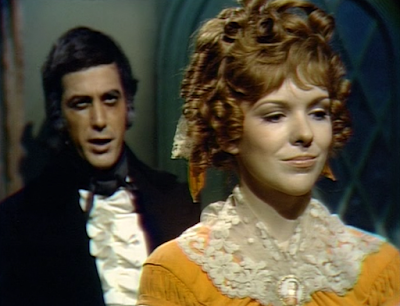 Gerard lies in bed thinks about Julia and Leticia making Zachery whole again. He then wonders why he's so sleepy. He falls asleep and dreams. He hears Zachery's voice telling him to find it. He asks what he's looking for. The voice says 'hate' and laughs. Gerard wakes with a start, saying, "Of course!" 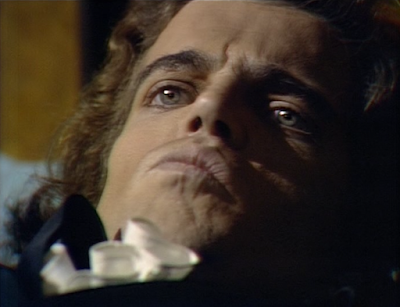 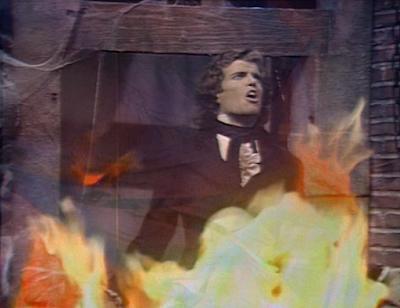 Gerard arrives at the grave and pulls the lever to open the secret path.

Barnabas tells Julia that Quentin and Desmond agree that they should not tell the authorities about Zachery. Trask walks in on them and asks if Samantha is home. Julia says she's upstairs. Trask asks Barnabas how his beautiful wife is doing. He adds that he will soon be joining those joined in holy matrimony, marrying Roxanne Drew. Barnabas is shocked. Trask asks if he's going to congratulate him. Julia says it comes as a surprised, but they both hope he will be happy. 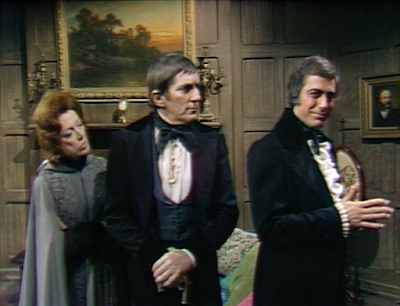 Gerard looks around in the tomb. He sees the hand extending from the rubble. He smiles when he sees the mask. He lifts it up, revealing Zachery's head. 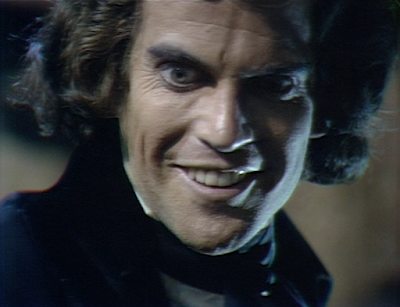 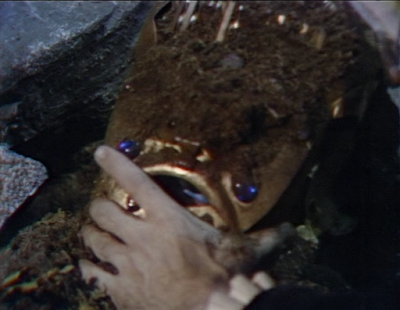 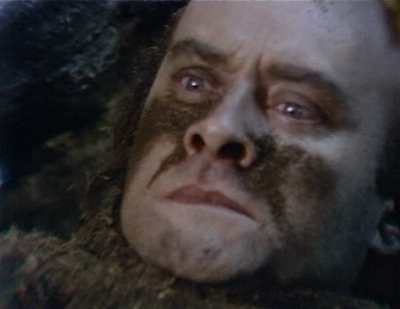 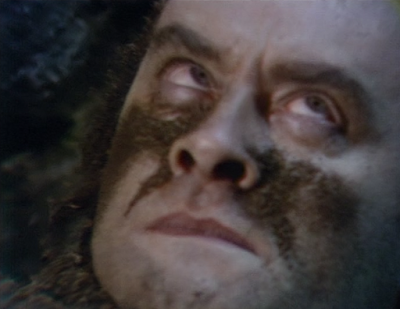 John: Didn't Zachery survive destruction by fire previously? Why would they think he was destroyed so easily? Surely they know better!
Christine: They were led to believe he was destroyed when his possession of Julia ended. So, why did he lose control over Julia? Was it because he decided to possess Gerard instead? How come he couldn't manage them both? It would seem he needs the services of a doctor now more than ever.
John: How long is a full moment? Trask made a big deal that he was watching Roxanne for a full moment, like that's a lot of time.
Christine: A full moment is much longer than you would want Lamar Trask staring at you unaware.

John: So I guess we're to understand that Zachery's head popped off his body when the place was falling apart? I'd love to hear the explanation as to why. And particularly, why he suddenly stopped pursuing Gerard.
Christine: It appeared that he stopped pursuing Gerard because he was overcome by smoke and flames, and his head may have been blown off when the ether exploded. So, will Gerard be putting his head back in a box, and will he be tasked with finding a new body for it? 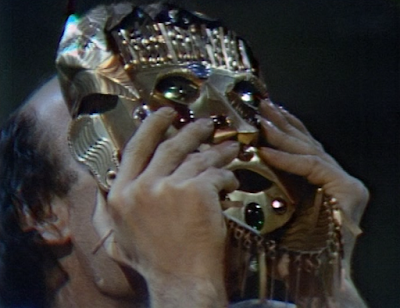 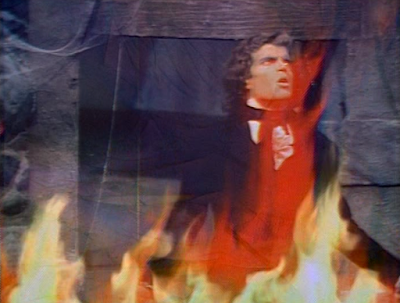