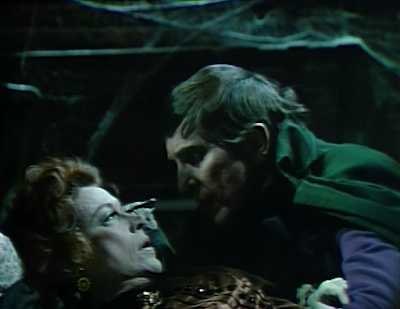 Barnabas arrives at the lighthouse and finds Julia unconscious. He manages to wake her when he sees Roxanne, who says Julia must remain here. Barnabas says he wanted to spare her this existence. He says that there's nothing she can do to stop him. Roxanne says Julia responds to his will. He tells Roxanne to look at him. She turns away, and says he'll be sorry that he interfered. She leaves, and Barnabas helps Julia up. 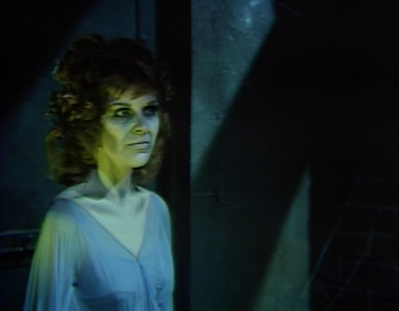 Flora tells Randall that she hopes he'll stay in Collinsport. Trask arrives to speak to Gerard. Flora explains that he's at Collinwood. Trask says he hopes Gerard isn't becoming emotionally involved with anyone there. Flora asks what he means, and he says an insidious evil has crept into the house, and he is not at liberty to divulge its nature. Randall asks him why he bothers to bring it up if he's not at liberty to divulge it. Trask says the almighty will deal with Randall's blindness, and Randall says he will have his hands full dealing with Trask's. Randall tells Flora that Trask believes Collinwood if full of witches and evil spirits. Trask says Quentin is in league with the devil, and Randall says he's had enough of his nonsense. 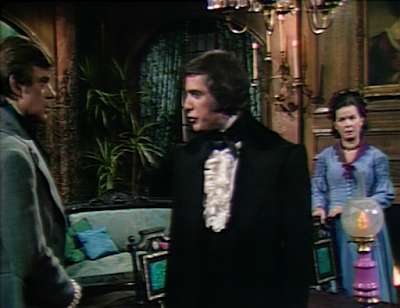 Trask says Randall may be content to merely accept Roxanne's death, but he intends to prove that she was murdered by an act of sorcery. Flora says he must be mistaken about Quentin. Trask tells Flora that she will soon believe him, as he has confidence in her judgement and faith. He says he cannot say the same for Randall. He bids them goodnight and leaves. Randall tells Flora that Trask has a warped mind. He says there may be a reason behind all of the tragedy, but he doesn't think it has anything to do with the supernatural. 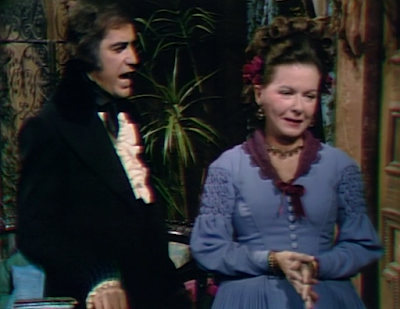 Trask is in the woods when he hears someone. He tells them to come out. Roxanne appears before him. He can't believe it. She tells him he was right — there is life after death. She tells him not to be afraid, and reminds him that he loves her. She commands that he look into her eyes. He begs her not to come closer as she approaches him with fangs bared. 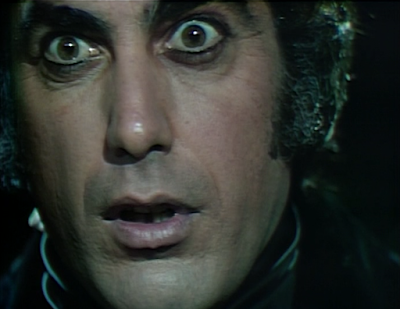 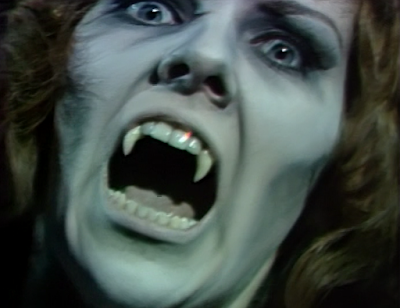 Randall thanks Flora for dinner, and then prepares to leave. They hear the door open and Barnabas calling. They find him with Julia, who he explains he found in the abandoned lighthouse. Flora sees the wound on her neck, and Barnabas tells her to take Julia upstairs and find a cross, while he goes to get a doctor. 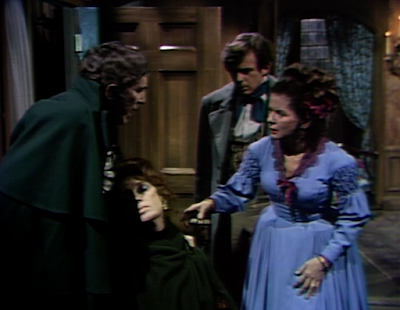 Barnabas tells Randall that a doctor has stopped the bleeding. Randall asks if she'll be alright, and he says she will only if they manage to keep the person who attacked her away form her. Randall doesn't understand. Barnabas says there's no gentle way of telling him, and explains that Roxanne has risen from the grave and was the one who attacked Julia. 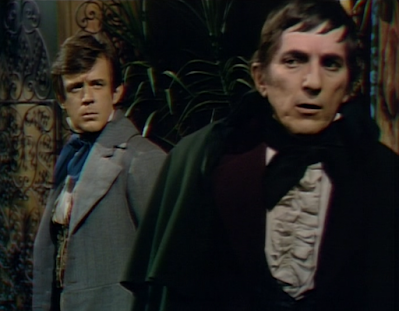 Roxanne points out that Trask is no longer afraid of her. He asks her to stay with him, or take him with her. She assures him that he'll see her again, soon. She will feel her summoning him, and will come to her. He tells her that he understands. 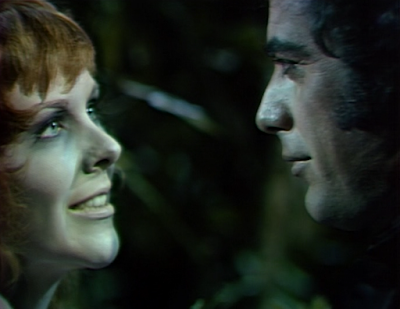 Randall tells Barnabas that what he says is not possible. Barnabas doubles-down and says that Roxanne died as a result of an attack by a vampire, and is now one of the living dead. Randall says he could only accept it if he sees her with his own eyes. Barnabas tells him to come with him.

Flora hears someone in the house, and finds Trask sitting in the dark. He says he was meditating. She asks if he's feeling alright, since he said he was going home. He says he's tired. She says that he's welcome to stay, and Gerard may even return while he's there. She adds that Barnabas found his sister, who was attacked in the woods just as Roxanne was. She says there may be something to what Trask said earlier about witchcraft. 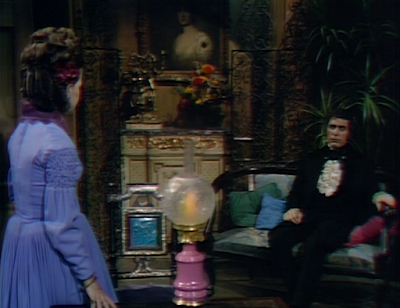 Barnabas and Randall return, and Flora says that she's well-read in the supernatural, and asks if Julia was attacked by a vampire. Randall confirms that she was. They tell her that the vampire who attacked Julia is Roxanne. She can't believe it. Randall says Barnabas showed him her coffin was empty. 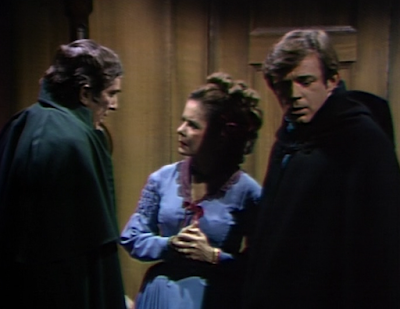 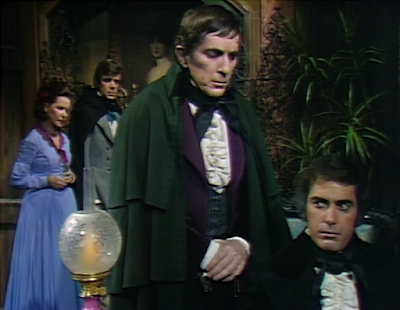 Roxanne calls to Trask, demanding that he come to her.

Trask gets up and excuses himself. Barnabas asks him what's wrong. He says he's very tired, and Gerard is unlikely to be back. After he leaves, Randall says he's never seen Trask so subdued. Barnabas points out that he's obviously a victim of Roxanne. He says if they follow him, he can lead them to her.

Trask enters a crypt as commanded by Roxanne. She hears someone and says they followed him. He closes he door and she disappears. Barnabas and Randall enter, and ask where she is. Barnabas realizes that she disappeared. He grabs Trask and tells him that he's not letting him out of his sight. Barnabas says that Randall must guard the crypt, and prevent Roxanne from getting into the coffin. He says he's going to take Trask back to the old house. Randall closes the crypt door after they leave. 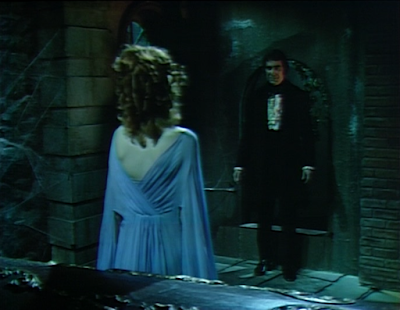 At dawn, Roxanne returns to the crypt. Randall holds up the cross and she begs him to put it away. She says she must get to the coffin. He says that preventing her is the only way she can achieve peace. 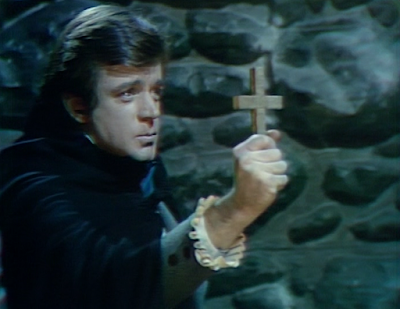 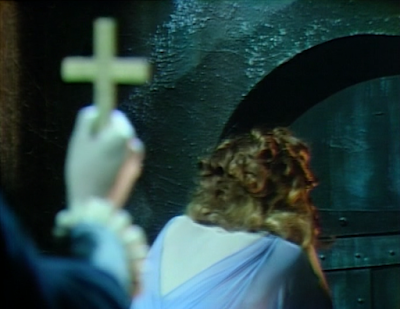 John: Flora is so aloof compared to Elizabeth, and yet she's the first one to figure out that a vampire was responsible for the attacks!
Christine: Joan Bennett appeared genuinely startled when Trask sidled up behind her and barked at her. It's not surprising that Flora deduced a vampire was responsible. You know how well versed she is in the supernatural, after all.
John: I loved Roxanne's over-done ghoulie-vampire make-up... and her switchblade canine-teeth, that appear and disappear as soon as the camera cuts away. Pretty impressive for freshman vampire to have already mastered the disappearing trick. Makes one wonder why she couldn't just reappear within her coffin.
Christine: She is absolutely hideous! Considering that this goes against the trend of seductive female vampires in the 70s, it really had a terrifying effect. Of course, most frightening was the way she subdued Trask. 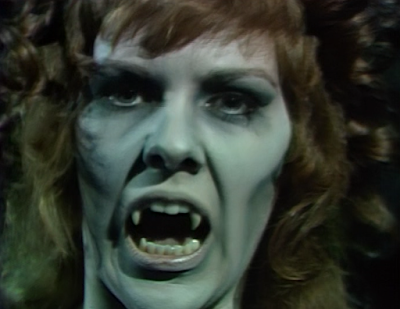 John: Randall made a pretty quick switch from "denier of the supernatural" to "willing to believe that my dead sister is a vampire." I guess that just goes to show Barnabas will always be more convincing than any Trask. Of course, classic bumbling Barnabas move of leaving an apprentice Van Helsing to fend off the vampire alone, particularly when said vampire is his own sister! Couldn't he have had Randall take Trask to the old house? Methinks Barnie didn't want to be the one to have to dispatch his former love interest. He could have really used Julia's help... but he didn't get it, and she didn't even have the day off!
Christine: I had those same thoughts exactly, but then I realized Barnabas needed to be returning to his own coffin, so he couldn't really stick around to do the job. On the other hand, maybe he could have taken over her coffin. I wonder if there's some vampire rule against that sort of thing. That would have been an interesting turn of events for Roxanne to raise the coffin lid and find her ex-boyfriend squatting in her resting spot!
Posted by John Scoleri at 6:00 AM