Quentin arrives at the train station, but the New York train has already left, and Amanda is nowhere to be found. 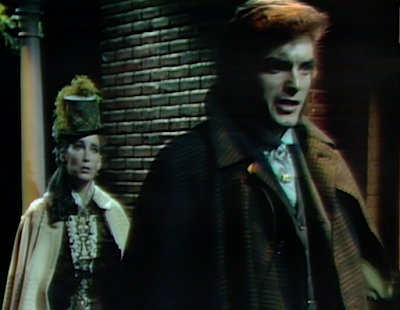 Tate comes to as Petofi is knocking at his door. He lets him in, and Petofi asks if Quentin got the portrait. He asks where it is. He tells him he will punish him for stealing it, but right now he needs to know if he found it. Tate uncovers it. 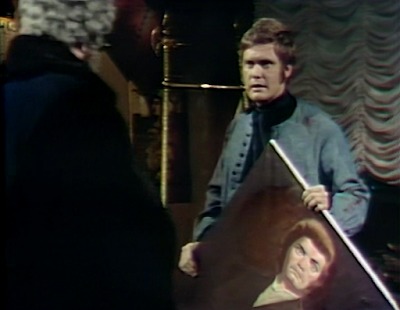 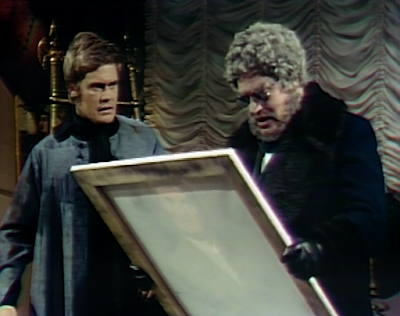 Petofi tells him it's a good thing it's still in good condition. He tells Tate that he will not let him interfere with his plans for Quentin. Tate says Quentin interfered with his plans. He says he asked Amanda to marry him, but she was running off with Quentin. Petofi asks what he planned to do with the portrait. Petofi tells him that he will be keeping the portrait. Petofi asks if it's the first time Tate deceived him, and he says it was. Petofi says he has the portrait, Quentin has Amanda, and Tate has his painting of Amanda. Petofi tells Tate that he too has an ideal woman. He asks Tate to paint her for him. A quick sketch of a dark haired woman with a cat's eyes. Tate reluctantly does a quick sketch. 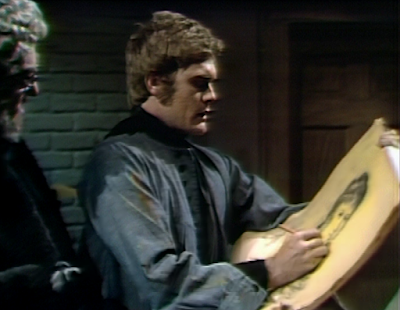 Petofi urges him to add a final stroke to finish it. Petofi says she's so beautiful that he can't believe she isn't in the room with them. Tate looks around the room. 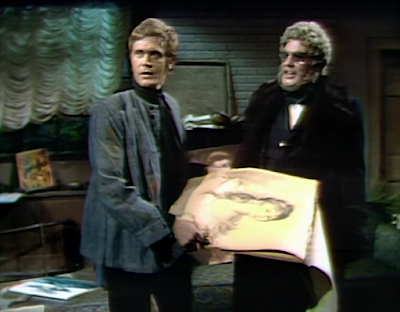 Petofi says he almost forgave him for stealing the portrait, but Tate was arrogant. He grabs Tate's hand, and then leaves. 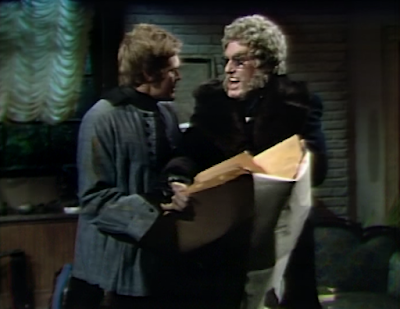 Tate sits down and tries to start a new sketch, but he is unable. 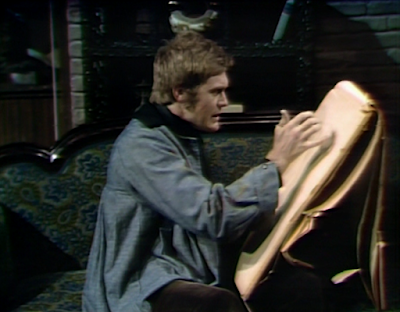 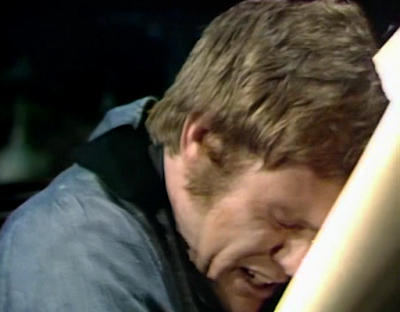 Tim arrives at Collinwood and shows Quentin letters from Amanda that he says implies she found a new man. Tim shows him a brooch she left him. Quentin asks Tim for all the information he has on Amanda. Tim says he won't help him, because his only future with Quentin is death. Quentin grabs him and threatens to kill him. Tim says they met in New York. Quentin asks where, and Tim says she'll be hard to find. Quentin throws him out the front door. 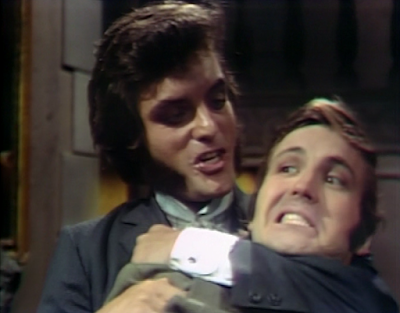 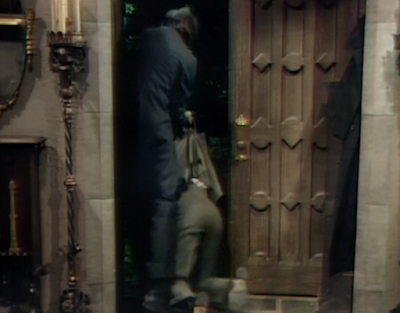 From the top of the stairs, Angelique asks why he was so harsh with him. Quentin explains he was interfering with his plans. She asks about his plans, and he says she wouldn't be interested. She says she's very interested, particularly in his wedding plans. He says he has none. She tells him to choose the date. He tells her they can do that when they return from Boston. She asks again for a wedding date. He goes upstairs to pack, and Petofi arrives at Collinwood. He asks if Quentin has left yet. She asks if he knew he was going away. Petofi says it's hard to believe someone would choose another woman over her. He tells her they have a common cause at last. 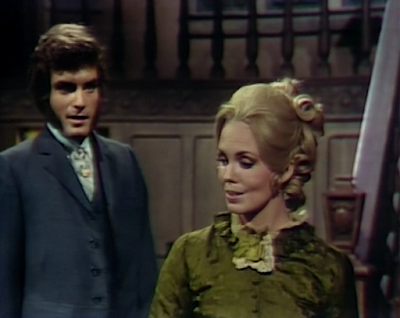 Quentin comes downstairs with a small bag to find Petofi waiting. He says he came when he heard that Quentin was leaving with Amanda. Quentin says he can't stop him, and Petofi explains that he didn't come to stop him and doesn't need to be near him to get what he needs from him. 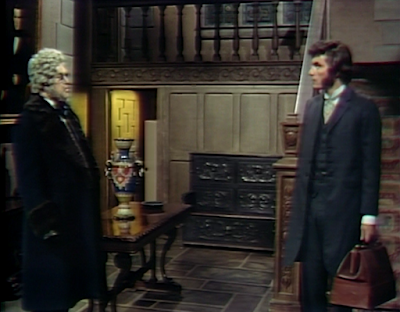 Tim picks up a note from Amanda when Petofi comes to see him. He tells Tim that he's sorry Amanda chose Quentin over him. he asks if the letter is from Amanda, and Tim says it is. Petofi asks Tim if he would like him to put the situation right. Tim says yes. Petofi tells Tim that he had Tate draw a picture for him, but the person didn't appear. Tim says he didn't imagine it. Petofi says he saw what he wanted to see, the way a hungry man sees food when it isn't there. He assures Tim there are still ways they can be of use to one another. He leaves, Tim not realizing that he has taken Amanda's brooch. 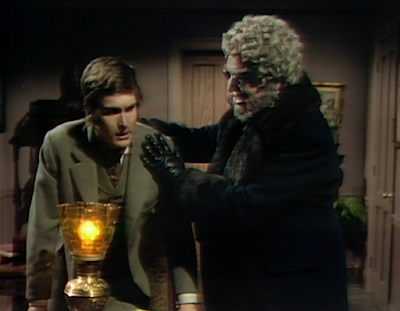 Quentin is at the train station when Angelique appears. She points out that he's on the New York platform, despite having told her he was going to Boston. She says she knows he's going to find Amanda. He says he tried to care for her, but he loves Amanda. She tells him not to get on the train, and he says she can kill him if she wants. She tells him that she wouldn't harm him if he gets on the train, but Amanda would not be as fortunate. She pulls out a doll and Amanda's brooch, suggesting that she'll die horribly and painfully, if Quentin gets on the train. 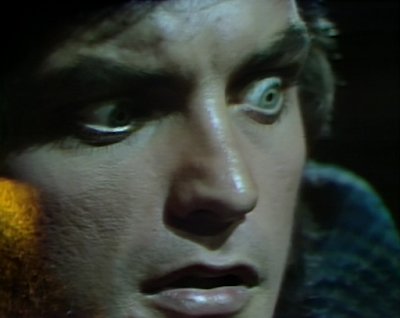 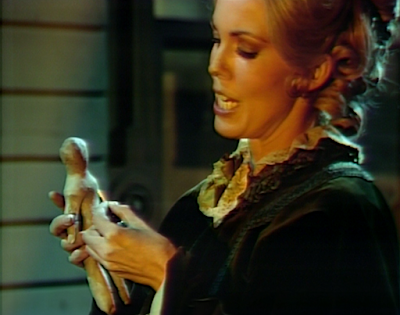 John: I love how Petofi toys with Tate. And while I love that the sketch he did in a few seconds was a near-finished portrait, I was disappointed that she didn't appear.

Christine: It is a mystery how Tate's gift of creation works, though I am surprised that Petofi wasn't a little more determined to test whether or not what Tim Shaw told him was true before removing the power to create from Tate. It seems Tate has been sketching more women. I wonder if a bevy of beautiful new actresses are about to arrive in Collinsport, courtesy of his charcoal pencil. 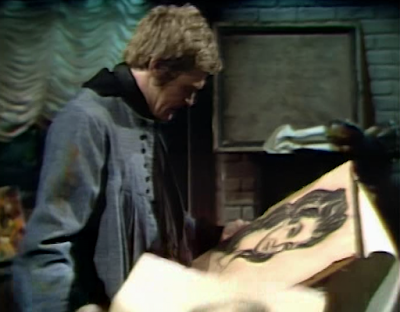 John: I still think the only thing missing from the new series within a series, "Everyone Loves Amanda!" is the presence of Barnabas. Somebody needs to get that stake removed, STAT!

Christine: I don't expect Barnabas to jump on the Amanda bandwagon while he's got the reincarnation of his beloved Josette around. I wonder how long it will take Julia to realize she can restore her boyfriend by de-staking him.

John: All this train talk has got me wondering. Before last Friday, have we been back to the train station since Vicky's arrival in Collinsport in the premiere episode, all those years ago?

Christine: The last time we were at the train station was when Edward arrived in Collinsport with Rachel Drummond in Episode 705. After another fun scuffle with Quentin over Amanda, I am hoping all three lovestruck guys will be able to get together for one big, nasty brawl before Angelique has a chance to dispose of her.


Down for the Count:
Barnabas was staked in his coffin 6 episodes ago. 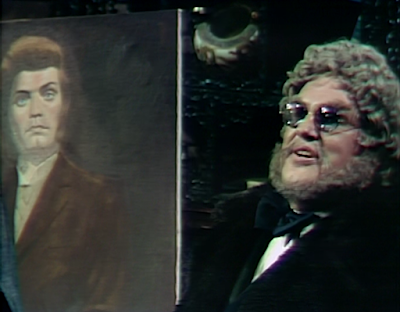 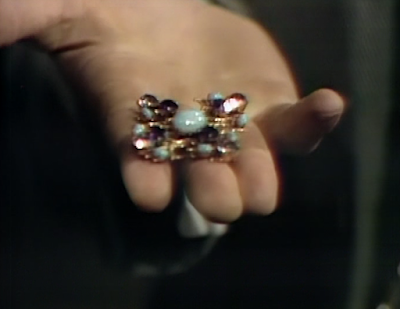 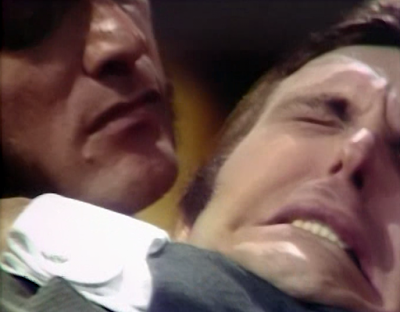