Jamison is in the drawing room when Edward enters. He says the doctor said that Jamison is fine. Jamison says the doctor didn't even notice that he was missing a hand. Edward tells him to take his gloves off, and when he refuses, he accidentally removes Jamison's hand. He assures Jamison that he'll be alright. Jamison says he loves his father, and kisses him on the cheek. Jamison takes his fake hand and goes upstairs. 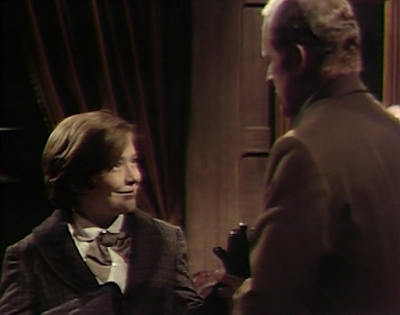 Quentin comes in and finds Edward speaking like s stranger. He suggests he's looking for a job, and asks what the house is called. Edward says he worked in a fine home. Quentin asks him if he's been drinking, and he says he never drinks during working hours. Quentin tells him he must listen to him. Edward calls him sir, and says he knows his place. Quentin tries to impress upon him that he is Edward Collins, and this is his home. Jamison returns and Quentin asks why he's doing this to them. Jamison tells Edward where the servants quarters are. Quentin tells Jamison it's time for young boys to go to bed. 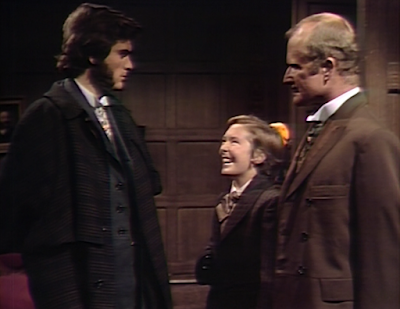 Jamison leaves, and Edward says that some servants don't like working with children, but he thinks they brighten the home. Charity comes in and Quentin tells her that Edward thinks he's a servant. 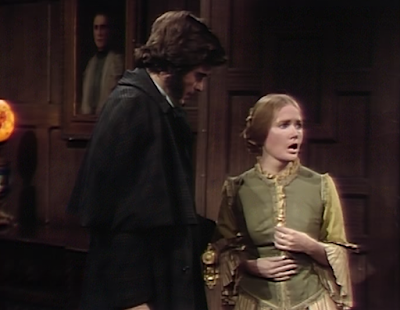 A man named Charles, who looks like Dirk comes to see Jamison. Jamison assures him he is the one he's there to meet. He is there to paint a portrait of Quentin Collins. 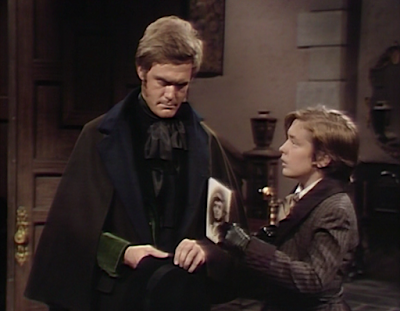 Charity and Quentin lead Edward upstairs and lock him into a room. Quentin says they must work together, and Charity suggests that they can pray. He bids her goodnight. She accuses him of going to town to see a slut, because she is too much of a lady for him. She slaps his face. 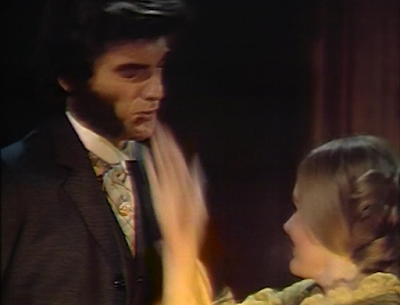 Quentin goes to see Barnabas. Barnabas asks if he sent for Jamison. Quentin says he has. Barnabas says they must remove Count Petofi's mind from Jamison. Barnabas picks up a photo and asks who it is. Quentin explains that it's Jenny before they were married. Quentin says he visited his son's grave in the woods. Barnabas confirmed that he was buried with a pentagram. 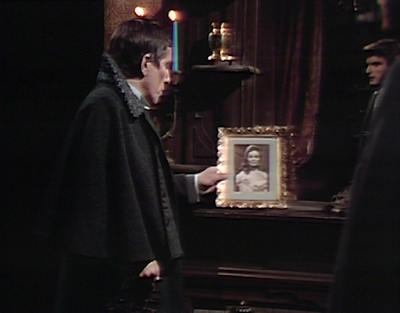 Jamison arrives, and is excited to see his cousin Barnabas. Barnabas tells him that they all love him, and he must fight, too. Jamison asks if he is at risk appearing in the house. Barnabas refers to him as Count Petofi, and says they do not have the hand. Jamison says they will get it. Outside, Charity listens in. Barnabas attempts to hypnotize Jamison, but fails. Jamison tells them goodnight and leaves. Barnabas tells Quentin that he has another plan. 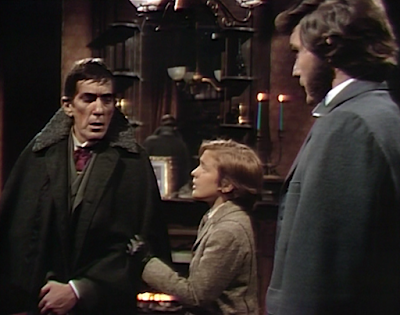 Charity calls a sanitarium to reach her father. Jamison enters and she asks if he's feeling well. He tells her he's fine. He than says that she's pretty, and kisses her on the cheek. The phone rings, and Charity answers it with a thick British accent. Jamison smiles. 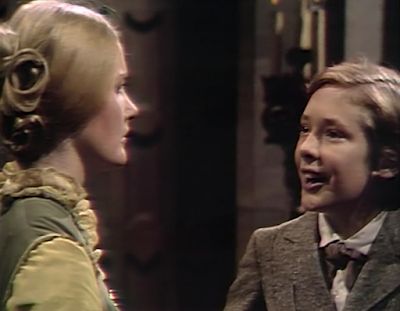 Quentin finds Charles in the drawing room, and asks what he's doing there. He says shows Quentin a sketch he's working on of him for a full-length portrait commissioned of him. He shows Quentin a letter from his grandmother. Quentin explains that she's been dead for some time. Charles doesn't seem concerned. He says he accepted money for a commission, and says a quite a few people would like him to paint their portrait, and Quentin tells him to paint them. He takes him by the arm and shows him the door. 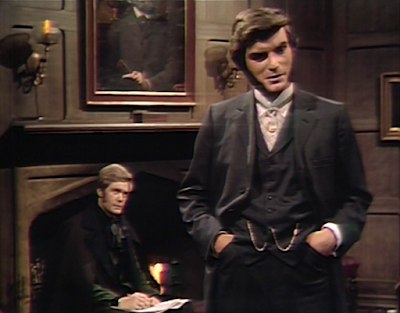 Dancing and singing like a drunken-floozy, Charity comes downstairs. Quentin doesn't know what to make of it. She flirts with him. She says she's looking into his mind, and tells him she sees Carl Collins is dead because of him. She says he helped kill his brother. 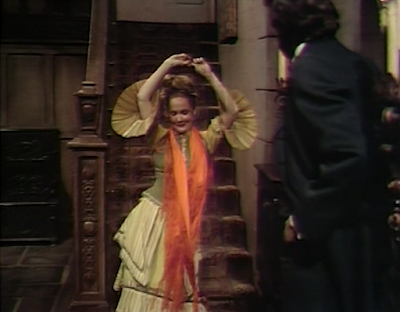 Jamison claps, and Charity comes to, asking what happened. Quentin helps her upstairs. Jamison takes out a book and writes notes. Edward - Servant. Beth - in bondage to a vampire. Trask. Magda. Evan. Charity - slattern. He smiles. Barnabas grabs Jamison and drags him through a secret panel. 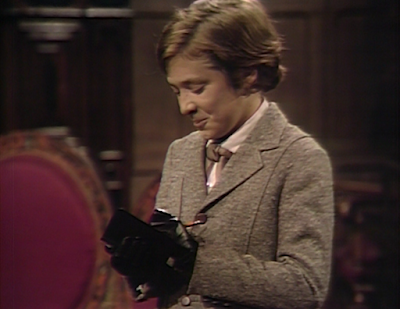 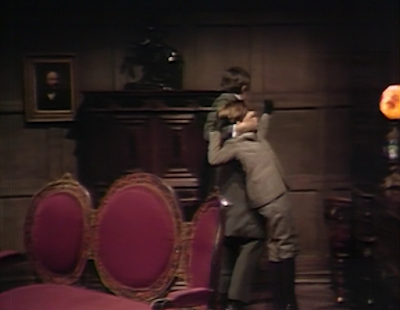 John: Aristeedee, Charles? I hope someone actually calls him that when we see him next. Might Charles the painter be the introduction of a Dorian Gray story element to Dark Shadows? That's one of the last classic gothics that hasn't been explored yet...

Christine: I expect some new portraits will be added to the Dark Shadows Gallery soon. Petofi has got quite a cruel sense of humor to not only make Edward think he's a servant, but also have him believe that children brighten a home. If Quentin didn't already believe he was possessed, that surely would have convinced him.

John: So should we be tracking a kiss-curse? Jamison provided some exposition in an attempt to explain what we've seen thus far, though he didn't clarify what Trask, Magda or Evan's curse will be...

Christine: I'm hoping we won't need it, and Barnabas will be able to do something to restrain those dangerous boy lips, but you'll find a kiss-curse tracker below, just in case. Any guesses on how Petofi might like to curse the other folks? Good thing he's keeping track in his little black book.

John: I didn't catch it at first, but it appears that Charity has been possessed by Carl's Pansy. Of course unlike the others, she seems to have reverted to Charity too quickly. I'm hoping there will be more to that particular possession.

Christine: I think that was Petofi's doing, since he surely enjoyed having her be mortified by her awareness that she was exhibiting behavior she finds morally repugnant. The fact that actors are now playing multiple characters in this time period may suggest that Barnabas has overstayed his welcome in 1897.

Jamison is doing pretty well for himself, I don't even think Morganna the Kissing Bandit got that much action in one day.

A Morganna joke is a pleasant surprise.