The werewolf is locked in a jail cell.  He's surprisingly calm. 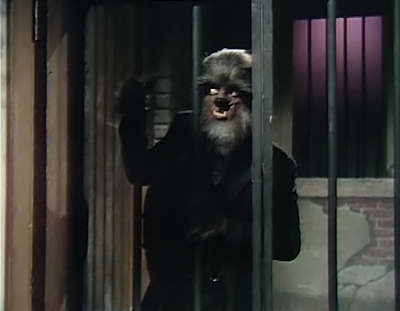 Edward receives a phone call from the sheriff, looking for Reverend Trask. Edward says that he's busy, and asks if there's a message. He's told that the werewolf has been captured and is locked in a cell. Edward tells the officer that he's on his way. 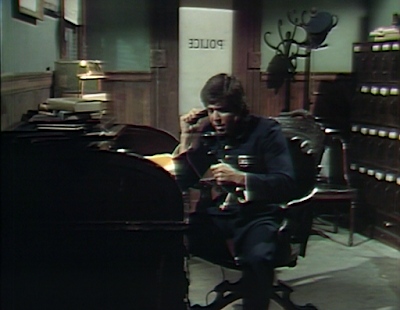 Edward stops at the old house. He tells Magda that he can't believe she's still at the old house after helping Barnabas. He says they have Barnabas on the run, and they will find him soon. He shows off his cross and gun loaded with silver bullets. 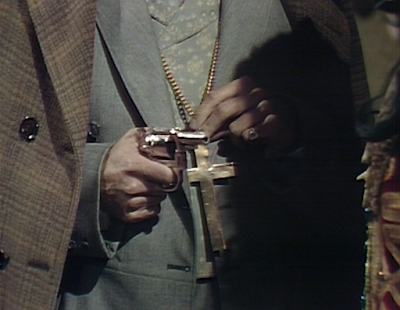 He mentions that one supernatural creature has been found and Barnabas will be next. He accuses her of knowing about the wolf man as well. He mentions the word lyncanthrope, and she denies knowing what it means. He says that in the morning, the wolf will return to a man, and Edward will be there to see who it is. He orders her to leave Collinwood by morning. She asks if he wants the word out that a Collins family member is a vampire. She then tells him that Trask has already invited them to say. Edward says he will deal with Trask once he's done with the werewolf. 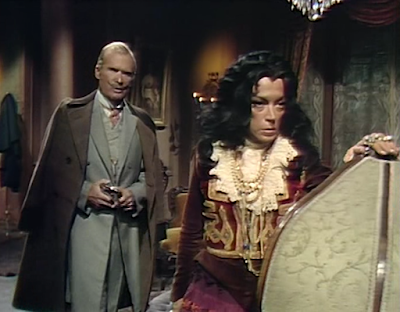 He storms out and Barnabas appears. He asks Magda for an update. She tells him that Quentin begged her to use the hand on him during the transformation. He asks what happened, and she says it had no effect at all. Barnabas asks how she knows, and she says he turned, ran out, and was subsequently captured by the police. She tells him that he's in the Collinsport jail. Barnabas asks her to get the hand before someone else gets ahold of it. She says it's gone. Barnabas says that Evan was still in the house, and goes looking for him. He can't find him. He tells Magda to get the hand back from Evan. 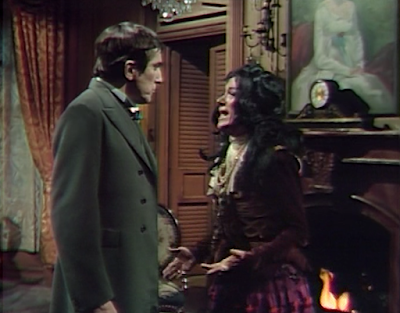 Mangled-face Evan stares in the mirror. He opens the box with the hand, and says that if the hand can do this to him, it must be able to undo it. He picks up a knife to stab the hand, and then puts it back down. He flips through books, searching for answers. 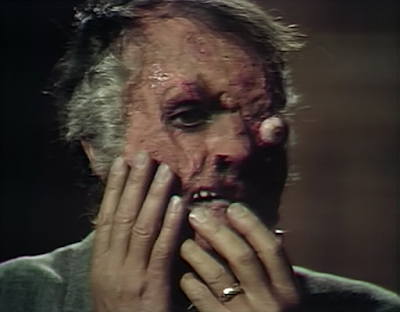 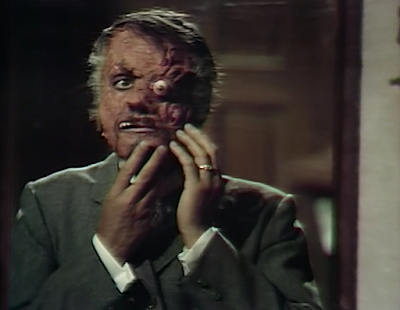 There's a knock at his door. He hides the hand and asks who it is. It's Magda. He lets her in. She says he got his faculties back, and he points out his face is not. She says she's there for the hand. He denies having it. She says she can help him, and he blames her for what happened to him. She tells him the hand has a mind of its own. She tells him that he was greedy, and the hand stopped him. 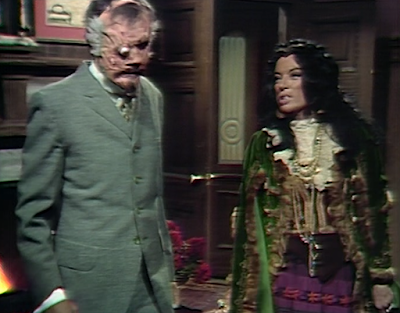 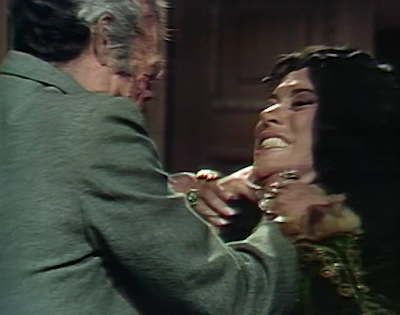 A bat arrives at the Collinsport jail. Barnabas appears before the officer. He grabs him by the throat and says he will not harm him unless he refuses to cooperate. He tells him to look into his eyes, and do exactly as he's told. Barnabas adds that he will forget him as soon as he's gone. He gets the keys and goes to the cell. 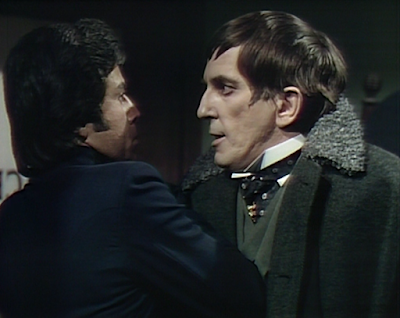 He starts to unlock the cell and hears Edward's voice. He returns to the office. Edward is shocked to see him, and brandishes the cross. Barnabas hides behind the officer. Edward asks if Barnabas is there to save the creature. He explains that he is there on behalf of the family's future. Barnabas says he wishes there was a way he could help Edward understand. He disappears. 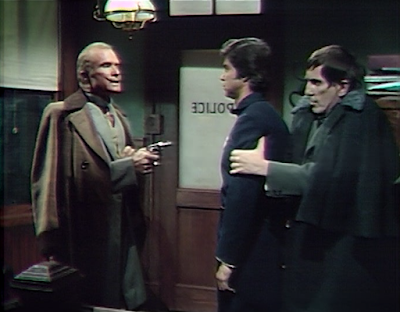 Edward asks if the officer is all right. He says he doesn't remember Edward coming in. Edward says he'll stay with him until dawn to see what happens to the creature when the sun rises. Edward tells him the creature is a supernatural being that will revert to a man at dawn. The only question being who he is. 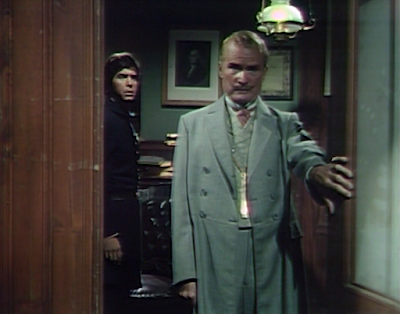 Barnabas says that they have failed. He points out that Edward will soon know Quentin's secret, and the events of the future will be changed accordingly. Magda asks if he should return to his own time before Edward finds out about Quentin. Barnabas tells her time is running out, and leaves to return to the cave. 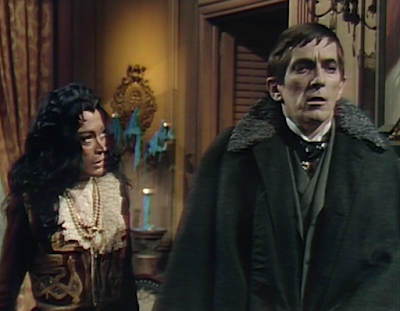 The werewolf reaches out to Edward through the bars. Edward tells the werewolf that the sun will soon be up, and he will know who he is. 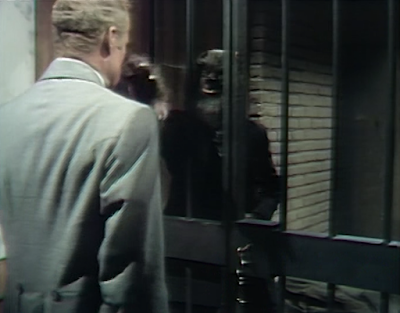 John: I do love how mangled-face Evan thinks that one of his books might include a user's manual for the hand. I must admit, I love how he can carry on a conversation with one eyeball popped out of its socket. As Magda says, at least he's got his faculties! 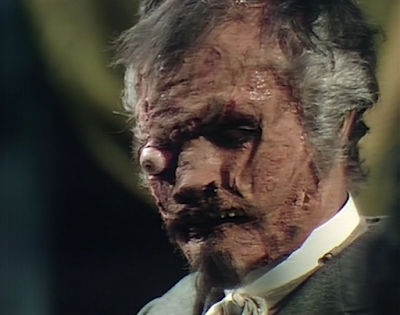 Christine: There must be some cumulative effect of the Hand, because he looks much worse (or better, depending on your viewpoint) than he did in Episode 785.

John: Anyone else notice that Edward entered the police station with his gun drawn? Talk about white privilege.

Christine: Someone is doing a really good business on those long chained crosses, though. Word apparently hasn't gotten out about the pentagram yet.

John: I think it's pretty clear that the hand has made Quentin's werewolf curse 'permanent' - at least for now. Of course, will Edward no longer think the werewolf is a supernatural creature if he doesn't revert to a man? In which case he's what, an advanced canine that happens to be a snappy dresser?

Christine: Really, I can't figure out how he doesn't recognize his own brother's clothes. Plus, he already knows what a wolf Quentin is to begin with, so the identity of the wolf man shouldn't be such a mystery to him. It will be interesting to see if Barnabas heads back to 1969 tomorrow to see what changes he's wrought. If so, will he be able to circle back to correct his mistakes?