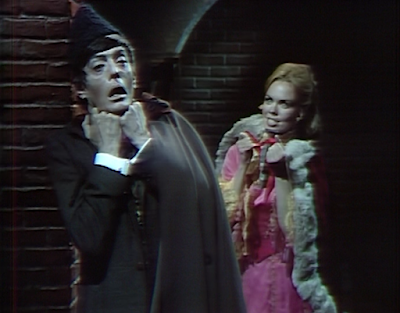 He says he can't, and begs for his life. She counts down from five and lets him breathe as she gets to four. He tells her the Hand is in a box buried in the cemetery. He gives her the name of a nearby tombstone. He asks for his handkerchief back, and she pulls it sharply around the puppet's neck. He falls to the ground. She places the handkerchief in his hand and walks away. 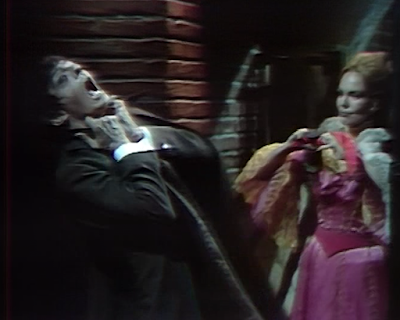 In Collinwood, Edward comes downstairs and runs into Beth. She's about to leave. He tells her that she'll be joining he and Judith early the next morning, as he takes his sister to a sanitarium. He then asks where she's going so late. She tells him she's going to look for Quentin. He suggests that she's wasting her time, but she goes anyway. 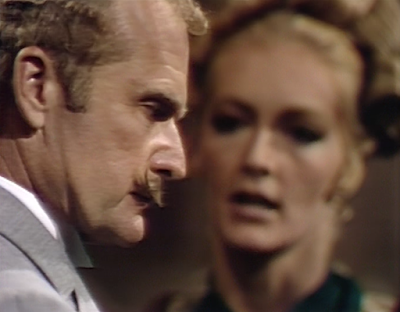 A man finds Aristede on the docks. He kicks him to wake him up. Aristede gets up and the man slaps him. He's angry that Aristede doesn't have the Hand. He tells the man, who he calls Victor, that a woman with strange powers took it. The man says that he'll get the Hand. He asks if it has already been used, and Aristede explains that it has. 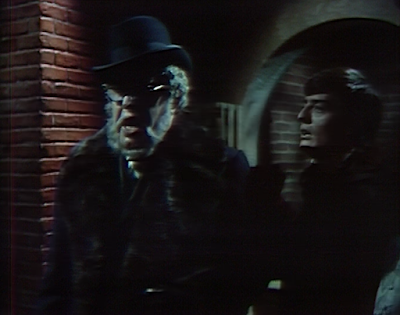 Beth arrives at the old house. She sees someone sitting in the shadows. Mangled-face Quentin stands up, and she screams. Quentin calls her, and asks her not to run from him. She recognizes his voice, but can't believe it's him. She asks what happened to his face. He says he changed the night before. She asks if this is part of the curse. He tells her she has no future with him, and tries to send her back to Collinwood. She says she's going to stay with him until they find a cure for the curse. They embrace. 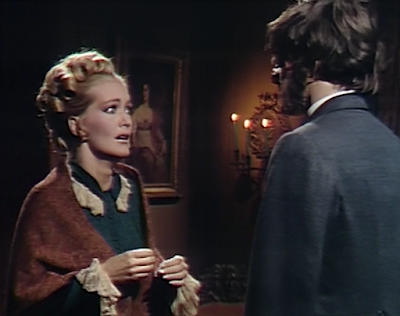 Edward calls Angelique into the drawing room. He says he received a call from Evan attempting to clear her from suspicion. He says he thinks she's known all along what Barnabas is, and that she knows where he is now. She denies it. She says she only learned what he was after they were engaged. She adds that she was a helpless victim of the vampire. He doesn't believe her act. She tells him that by the time she knew the truth, it was too late. She describes for Edward the first time Barnabas bit her, after which she was powerless to resist him. Edward falls for her story, and says she may remain in Collinwood. There's a knock at the door, and he goes to answer it. 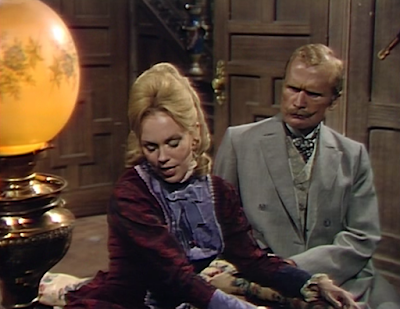 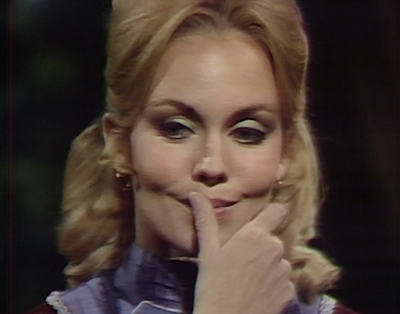 Victor Fenn-Gibbon introduces himself to Edward, offering an introductory letter from a mutual friend in England, the Earl of Hampshire. Edward invites him to stay at Collinwood. Angelique comes out of the drawing room, and Edward introduces her to Victor. He compliments her beauty, and she excuses herself to take something to a friend in town. Edward invites Victor into the drawing room for a brandy. 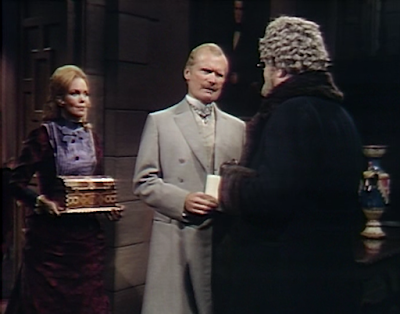 Beth is with Quentin when Angelique arrives with the Hand. She tells him that soon his troubles will be over. Beth asks about the Hand she refers to. Quentin goes to open the box, and Angelique reminds him of what happened when he last was near it. She offers to handle it. She tells Beth that she must leave. Quentin tells her to go to Collinwood and wait for her. She reluctantly agrees. Angelique opens the box, revealing the Hand. 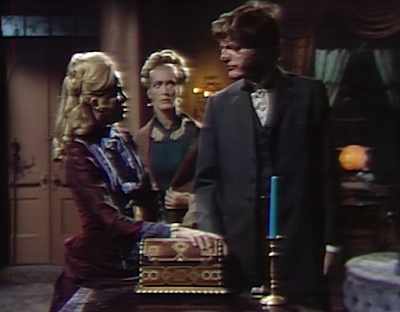 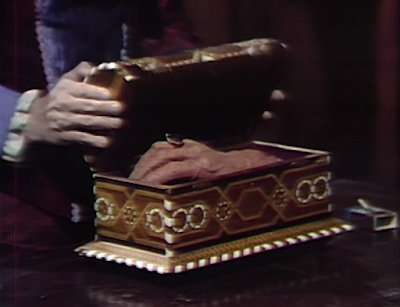 Victor thanks Edward for his hospitality. He leaves, and Edward says he will have the servants prepare his room. 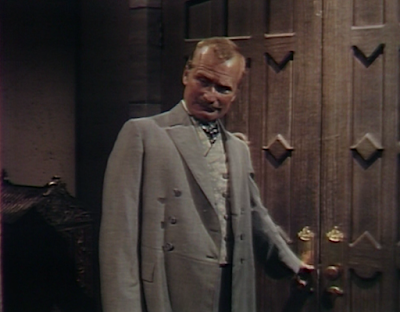 Angelique tells Quentin that they haven't settled on a price. He asks her what it is. She says she wants him to marry her. He accepts her terms without hesitation. Angelique takes the Hand out of the box. She recites an incantation. 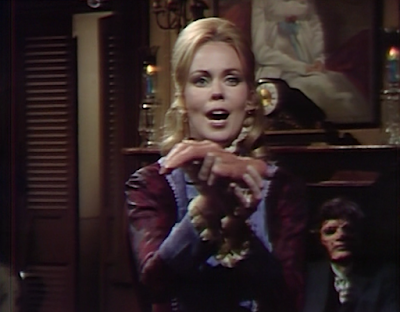 She tells Quentin that the Hand is alive and she can't control it. The Hand has moved to Quentin's chest. He begs her to do something. They don't see Victor staring in through the window. Quentin once again transforms into the werewolf. 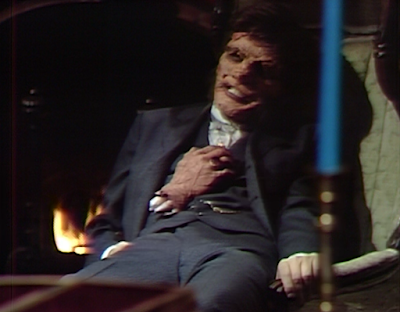 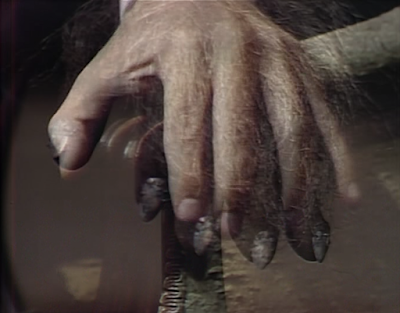 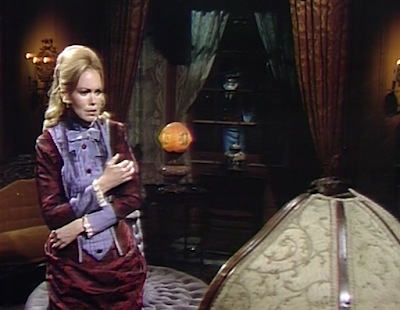 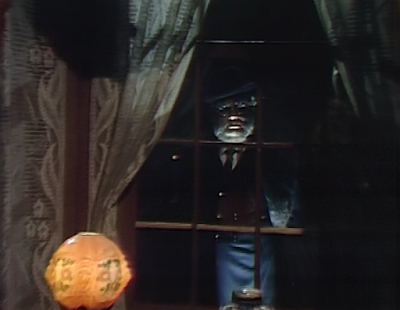 John: Aristede seemed frozen as Angelique choked him out! I thought for sure she had left him dead. Good thing someone came along to kick him back to life. Can't say I'm too upset, though, as I like Aristede. Though I'm a little bummed he went from being a seemingly powerful guy to a punk who was put in his place by both Angelique and an overweight gypsy...

Christine: Appearances can be deceiving. What makes you think Victor is a gypsy? He's not wearing any orange make up.

John: I was surprised to hear Sandor on the docks, and then more surprised when we found out it wasn't Sandor at all... but Victor. Will Thayer David be playing dual roles in 1897, or have we seen the last of Sandor the gypsy??? 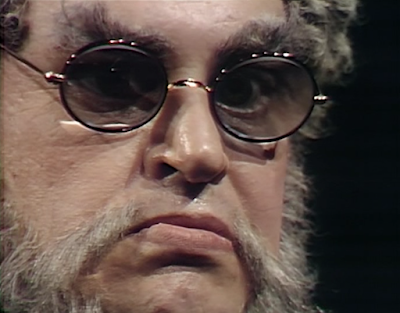 Christine: Hopefully the two will meet. It will be interesting to find out exactly who this Victor Fenn-Gibbon truly is, and what he intends to do with the Hand.

John: Wow. They couldn't even afford our regular hand stand-in to play the werewolf's hand today, so we see a dissolve from Quentin's hand to what looks like a cheap Halloween glove!

Christine: I thought that he had transformed to a muppet with a really cool manicure. I wonder if Quentin will still have to honor the bargain to marry Angelique, or if she still wants him to, now that she's seen his wolfish side. 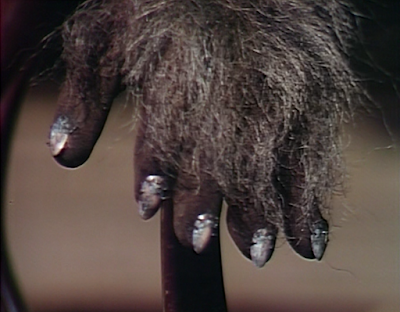