Magda grabs an axe, takes the Hand of Petofi, blames it for killing her husband and nephew, and cuts it in half. She puts the pieces of the Hand into the fire to burn. 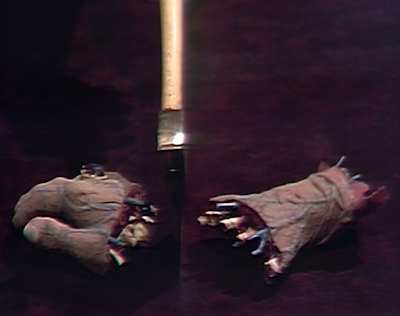 Aristede is in The Blue Whale drinking, and offers Tim money for information on Quentin. Tim asks what he plans to do with Quentin. Aristede says he won't tell him now just to be blackmailed later. Aristede asks if Tim is willing to do him a favor. 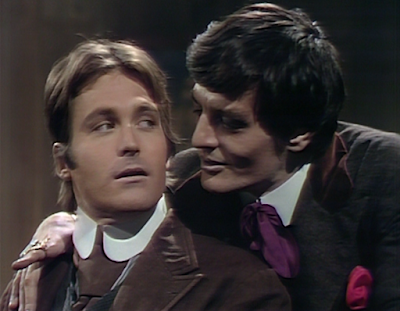 Quentin focuses on his two favorite pastimes—drinking and listening to his theme song. He wonders about his daughter, and whether he should go see her.

Charity comes downstairs and hears Quentin's music playing. She freshens up, and enters the drawing room. She's shocked to see him drinking so early. She tells him she enjoys sophisticated men. Quentin offers her a drink. She requests a sherry. He asks what will happen if her father walks in, and she locks the door. He tells her that will make her more compromised, locked in a room with a drunk bachelor. She says he's not a bachelor, but a widower. He adds that he is a father, and asks if that frightens her. She tells him that he may re-marry in time, just like her father did, as men are not meant to live alone. Quentin tells her that she'll find someone, but it would help if she had money of her own. She says she's not looking for money in a husband. She's interested in a family and a sense of humor. 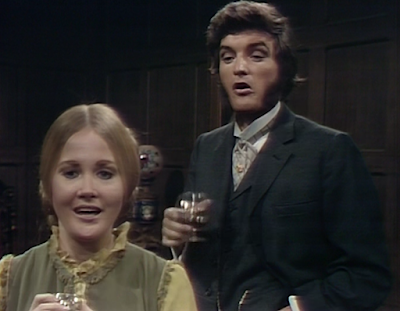 Magda tries to get in the locked drawing room, and he tells her to go away. She says she needs to talk to him and he lets her in. He asks Charity to leave them alone, and kisses her hand. 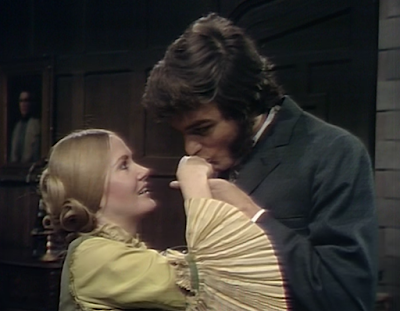 She leaves, and Magda tells him the Hand is gone. She says she cut it up with a hatchet and threw it into the fire. He grabs her throat and throttles her. He lets her go and asks why she did it. He says they could have found another Julianka. She tells him the Hand will cause no more trouble, but then it appears in the room with them. 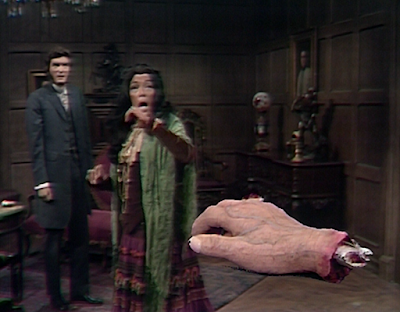 Tim hears Magda scream, and listens from outside the drawing room.

The Hand disappears, and Quentin asks her where it went. He tells Magda that it can't be destroyed, and thinks it's trying to help him.

Quentin says he'll go to Evan to use the Hand. Tim knocks on the drawing room door and Quentin lets him in. Magda asks if he needs any more deadly nightshade, and then says he doesn't remember. Tim asks when he did, and she says it was just before Mrs. Trask died. He's surprised to hear he bought poison from her. 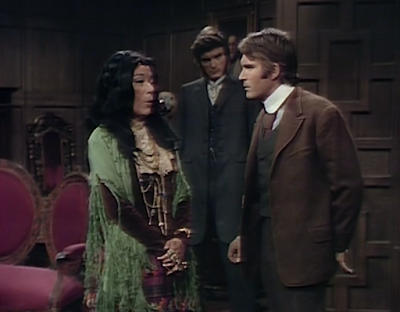 She leaves, and Tim says he doesn't know what she's talking about. He gives Quentin a note. He opens it and reads it. He asks Tim if he is a friend of Aristede. Tim says he just met him, and he wants to see Quentin. He says it's vital that he sees him. Quentin picks up a letter opener and says it's vital he sees Aristede once more. He leaves to go to The Blue Whale. Charity sees Tim, and tells him to get out of the house, and never come back. 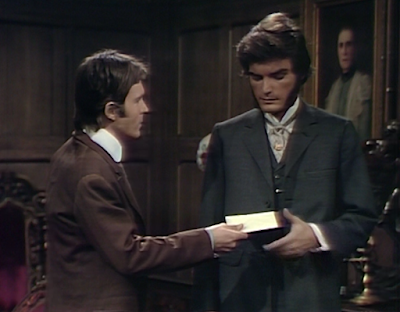 Quentin finds Aristede in The Blue Whale. Quentin says he knows what he wants, and asks Aristede what he does. Aristede apologizes for tying Quentin to the pendulum table. He says the moon will be full again, and asks Quentin to sit down. Aristede says there's a cure for his affliction. Quentin asks if he knows what it is, and Aristede says he does not. He says if Quentin shows him that he has the Hand, he will take him to someone who can help him. Quentin asks who else knows, and Aristede won't say. Aristede asks if Quentin is going to kill him, and Quentin asks if Victor will mind. Aristede is surprised. Aristede agrees to come to Collinwood the next night. 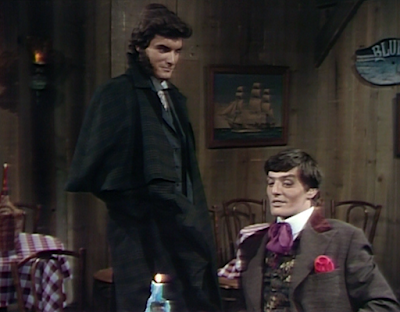 Tim peers into the old house, and sees Magda in the drawing room.  Magda sees the Hand appear in the fireplace. She runs out of the house and Tim comes in. He finds the severed Hand on the floor, and picks it up. He tells the Hand that it's exactly what he needs. 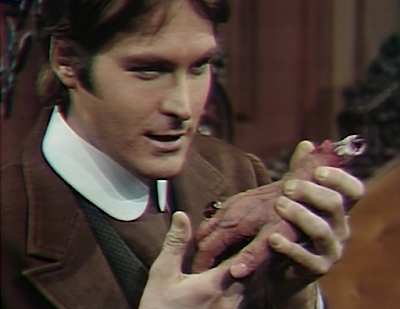 John: Wow! If anyone thought the hand of Petofi was frightening, the two halves of Petofi are doubly gruesome! I didn't expect Magda to actually chop it up, and definitely didn't expect we'd see the result if she did!

Christine: That was a lovely moment, for all the reasons you cited. I especially loved how the skin was cut flush, but all the veins and bones were sticking out, as though they popped out after the cut.

John: Crazy hand effects abound! I do have to laugh whenever an oversized hand shows up in the room with the characters. I'm curious if what they were imagining seeing was anything like what viewers actually saw.

Christine: What the actors imagined was probably worse or they would have had a difficult time acting so frightened. Funny how it kept poking Magda in the rear end. 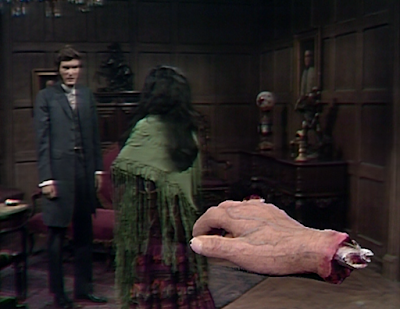 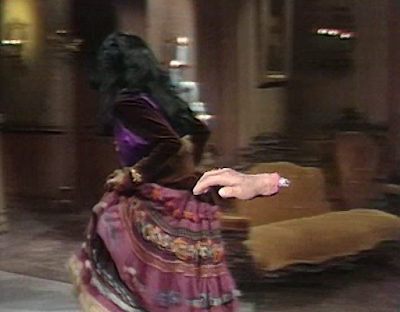 John: I always thought Jonathan Frid had a one-of-a-kind look, but often when Aristede is onscreen, I can't help but see a resemblance. Of course that makes me think he should be a supernatural creature, too. 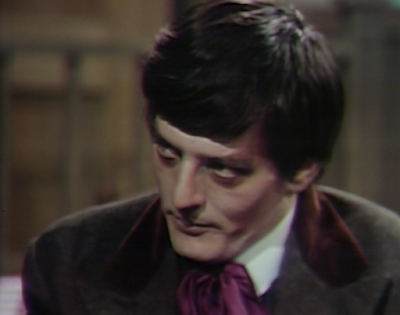 Christine: Aristede is certainly mysterious, with his unusual manner of dress and interesting relationship with Victor. Where did he come from and how did he become Victor's henchman and whipping boy? Perhaps we'll find out more about him in the days to come. Do you think Quentin is truly foolish enough to believe he'll help him be cured, and not see that it's just a ruse to get the Hand back? Not that it will matter now that Tim is busy fondling the Hand of Count Petofi. Will pretty boy Tim be the next one to suffer the disfiguring effects of the Hand? 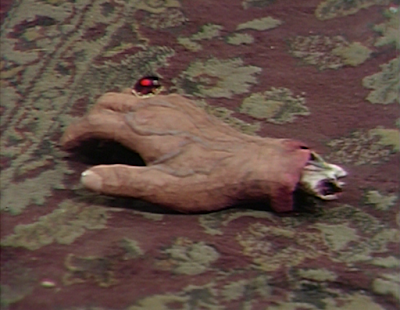