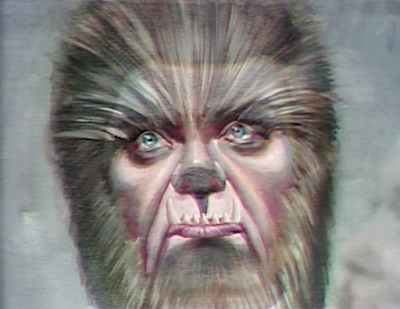 Tate works on his portrait of Quentin when Charity comes to see him. He flirts with her while painting. He excuses himself, and as she admires the portrait of Quentin, it changes into a portrait of a werewolf. Tate rushes back in and asks her what's wrong. She looks at it and it's the portrait of Quentin. She explains that while she was admiring it, the face began to change. She says it turned into a wolf. He offers her a drink. He tries to explain how paintings work, and that they don't change without him repainting it. She hears a wolf howl in the distance. Tate suggests that hearing the animal howling may have led her to believe she saw it change, and she tells him she didn't hear the animal before. She apologizes, and as she prepares to leave he insists on escorting her to Collinwood. 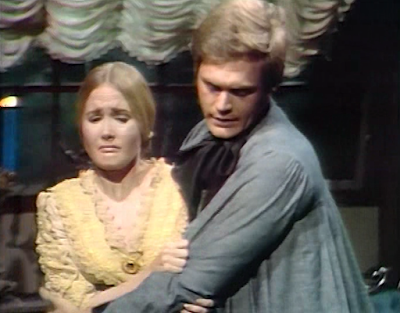 Jamison remains locked in the cell in the basement of the old house. He calls to Magda. She comes down and he asks her for matches. She says he's already got a lit candle. He asks her to stay and talk to him, explaining he's only a child, and doesn't like being alone. She doesn't fall for it. He holds up two candles and tells her they share a fascination with fire. She tells him that she's not stupid, and he won't trick her. She leaves him alone. 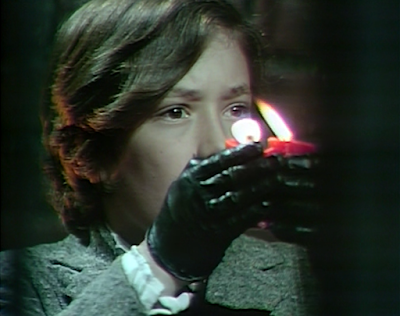 Tate visits Aristede. Aristede says that he shouldn't have come, and he asks if something went wrong. Tate says that wherever Petofi is involved, things go wrong. He asks if there's a werewolf in Collinsport. He mentions that someone saw his portrait change to that of a werewolf. He says he doesn't want anything to do with it. Aristede tells him he is there to paint a portrait of Quentin. He reminds him that before he met Petofi, he was a struggling artist. Tate says he's paid for it, and Aristede tells him he hasn't paid the full price. 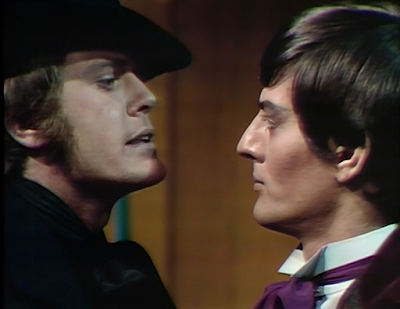 He tells Tate that he won't miss his soul when he's gone. Tate asks when he'll be able to speak to Petofi. Aristede says perhaps in the future, and perhaps not. He explains that this could be the last time he possesses someone. He had 100 years to get his hand back, in which case he would live forever. But if he fails, he dies. And he's only a few weeks away. Tate says that he hopes he fails. Aristede points out that when Petofi's time is up, Tate's is up as well. He adds that perhaps Tate should pray that Petofi succeeds. 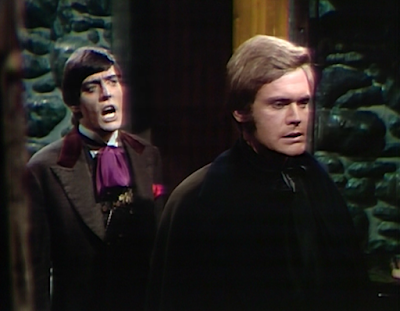 Jamison looks into the two burning candles. He attempts to send a message to Aristede. Magda listens to him.

Aristede sits up, having sensed something. He hears Jamison's voice. He asks where he is, and says he will come to him. 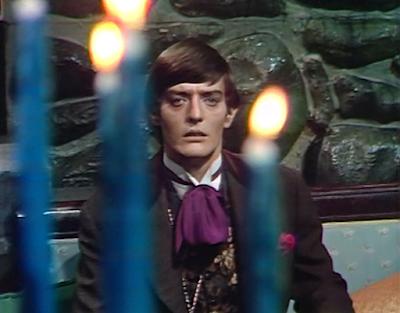 Magda comes upstairs to tell Barnabas that Jamison is summoning help from Aristede. He tells her that if they're lucky, Aristede will show up, and they can lock him in the cell with Jamison. Barnabas gives her a pistol, and says that if she has to, she must kill Aristede. He says that Jamison's life may depend on it. Barnabas leaves her, and she hears Jamison calling to her. 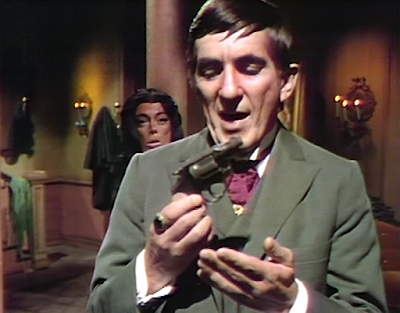 Magda comes downstairs, and Jamison asks why he's being punished. He asks her why she brought a gun. She says she isn't going to hurt him, and he starts to cry. She thinks he's no longer possessed, and unlocks the cell. She puts the gun down and tries to comfort him. He kisses her on the cheek, and she realizes that she's been tricked. 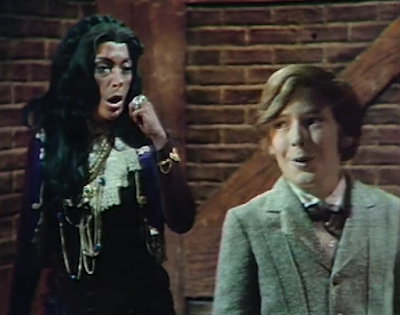 She asks what he did to her. He tells her she'll feel the effects of it soon. Aristede arrives, and Jamison says he has the situation under control. Aristede offers to dispose of her, but Jamison says they need her. Jamison tells Magda that he warned her that her time would come. She says that she is responsible for all the bad things that have happened at Collinwood, and proceeds to list them off. She says she must be punished. Jamison says she can end the tragedy by taking them to Barnabas. He says they know he sleeps in his coffin by day, and she knows where it is. She agrees. 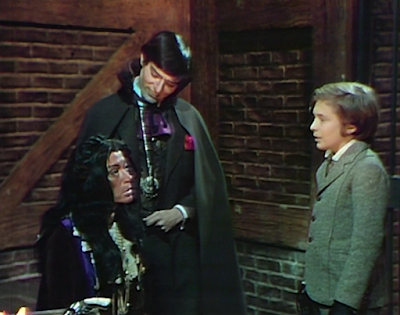 John: So Tate is under the thumb of Petofi (we'll assume the thumb on his good hand). Amusing to find out that Petofi is closing in on a 100 year search for the hand. Particularly when Magda knew right where to go to get it just a few weeks ago. Wouldn't Petofi have had the same info? Will we see a restored hand in the very near future, or will Petofi's hand go the way of the dodo bird?

Christine: Speaking of hands, Tate's not wasting any time getting his on sweet Charity. It is interesting to find out that his artistic gifts were bestowed on him by Petofi. I hope we'll find out that backstory. 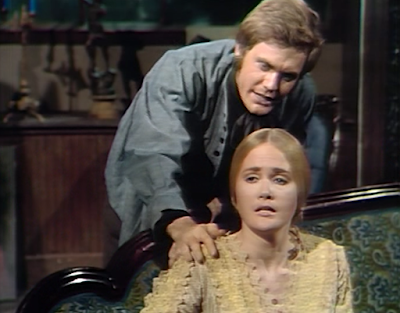 Christine: He might, though it's not out of the realm of possibility that if he's so thoroughly possessed Jamison that he would psychically call with Jamison's voice. David Henesy is doing quite nicely in his role as the devious mini-Petofi. It makes me wish he had continued being the evil little miscreant we met at the beginning of the show. He has a flair for acting naughty.

John: Seriously, Magda? You fell for the oldest possession trick in the book? I can think of a lot of characters who would, but a gypsy? Very disappointing! 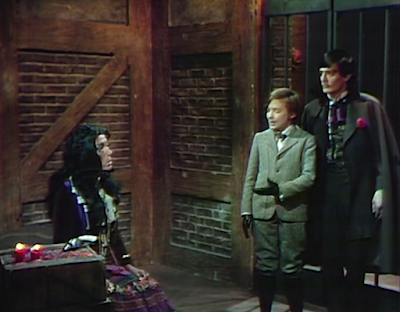 Christine: Don't blame the gypsy, blame the writers. I think it's out of character, especially after she kept Quentin from being tricked by Petofi. I would have much rather she had been bested by Aristede, which would have been more believable. It also would have been scarier to have him restrain her so Jamison could plant the kiss-curse on her. 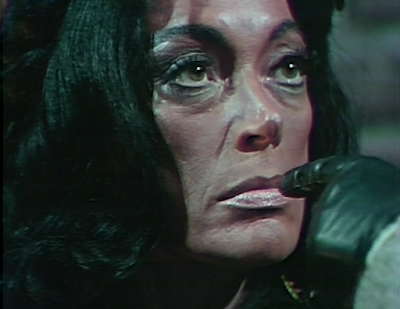 Episode 805: Jamison, possessed by Petofi, kisses Evan, who drafts a murder confession for Trask to sign.

Episode 807: Jamison, possessed by Petofi, kisses Magda, who feels responsible for all the tragedy that has happened at Collinwood, and decides to expose Barnabas' resting place to Petofi and Aristede.
Posted by John Scoleri at 6:00 AM