Quentin pours himself a drink and tells Evan that it's time to begin. Evan raises his arms and attempts to conjure the prince of fire. The doors swing open. He calls for Satan to appear before them. A figure appears in the doorway, and Quentin collapses. 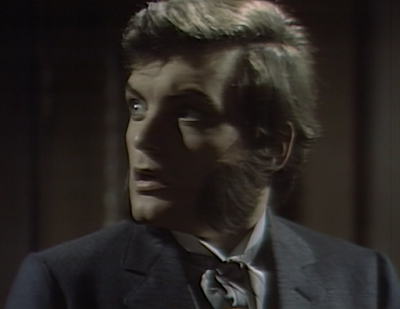 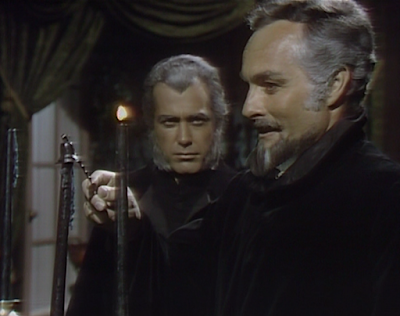 He leaves, and Quentin rises. He asks if the Devil is gone. Evan explains that it was Trask who walked in on them, sent by Edward. Evan takes off his black cloak, and Quentin says they're not finished. Evan says he may be finished as a respectable lawyer. Quentin laughs at him. Evan says though Quentin doesn't have a reputation to uphold, he does. Quentin says they must try again, and Evan vehemently refuses. Quentin tells him that he hopes that he gets everything that's coming to him. Evan threatens Quentin, saying that if he suffers, Quentin better watch out. Quentin lunges at him, but Evan tells him to save his animal instincts for tomorrow night. He tells Quentin to leave, and he does. 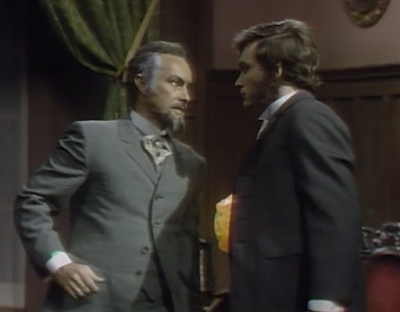 Quentin pours himself a drink at Collinwood when Mrs. Trask arrives. She asks if Judith is home, having brought her some plum preserves. She also asks about her husband, who said he was coming to Collinwood. Quentin says he hasn't seen him. She sits down to wait for Judith. Quentin offers her a drink, and she tells him that she doesn't drink. Quentin says that his sister admires her husband, implying more than a business relationship. He offers her a drink again and she says that her husband doesn't like drinking, particularly women drinking. Quentin mentions how his sister drinks a lot. Mrs. Trask leaves the preserves. Quentin asks if she wants to leave a message for her husband when he brings his sister home, and she says she will speak to him herself, later. 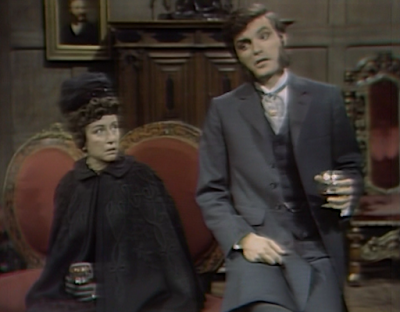 Evan calls Quentin. He says they can't be angry with each other, as they're in too much trouble with Trask. He wonders what Trask's price is going to be. Quentin says he may know how to lower his price.

Mrs. Trask tells her husband that she was humiliated, and accuses him of lying to her. She accuses him of being a sinner, calling up stories of lonely, rich women. Trask says those ladies were instruments that could help him with the school. She presses on, suggesting there was more to it. He tells his wife that she and her hysterical charges are a constant embarrassment to him. He starts to storm out, saying he's had enough of her irritating behavior. She says he's going to see Judith Collins, and he says that if he is, it's only for the sake of the school. 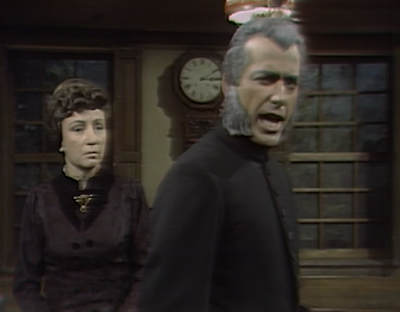 Trask arrives at Evan's home. Trask says he sees that Evan put away his playthings. He tells Evan that he called the Devil, and got him instead, which was surely God's will. Evan says they were conducting an intellectual experiment. Trask asks who would believe him, if he told them what he saw tonight. He suggests Judith Collins might believe him, and Evan counters that he pursues ideas the way other men pursue women. He says he pursues other ideas when he grows tired of them. Trask says a man does not become a Satanist casually. He begs Evan to deny it, so he can destroy him with a clean conscience. Evan asks about if he doesn't deny it. Trask says in that case he is facing truth, and there is still hope for him. Evan says that he is more familiar with it than most men. Trask adds that he's more familiar with it than he wants any man to know. Trask says that he is merciful, and might spare him. Evan asks what he wants from him. Trask says he hopes Evan is very good with his black arts. 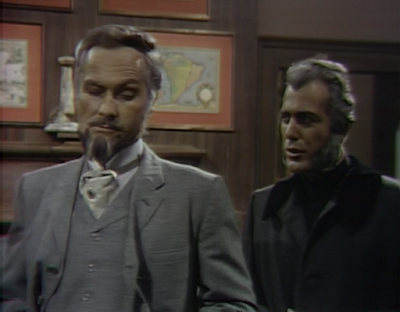 Mrs. Trask comes in as Tim is correcting papers. She questions his work, suggesting that the papers show signs children were cheating, when Trask comes in. He says that not all are as suspicious as she is, and asks her to leave them. 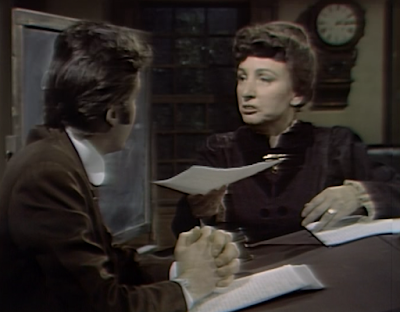 Trask asks him if he's unhappy in the school, and he says he is. Trask suggests that he and Charity should go off and start a life of their own. He says he just saw Evan Hanley, and he told him that Tim was very clever, and might be able to help him with a translation. Tim says he may have misjudged Trask. Trask says he has never misjudged Tim, knowing exactly what he is. He sends him to see Evan. 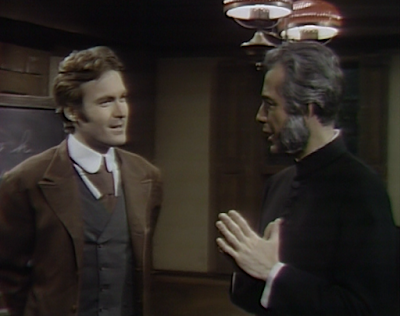 Evan prepares a potion when he receives a phone call from Trask. He tells him that Tim is on his way. Evan says he has to paint the edges of the book before he arrives. Trask says he is glad Tim will be able to use his Latin skills in such a useful way. 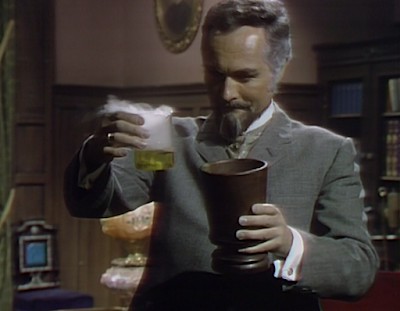 Tim reviews a book in Evan's home. He licks his finger as he turns each page. He tells Evan he was always teased about that, and Evan replies that in this case, it's exactly the right thing to do. He works his way through the book, reading it, but not writing anything down. Suddenly, he collapses in his chair. Evan asks him who he is, and Tim says he doesn't know. Evan says that at the right time, he will get a signal, and he will kill someone. 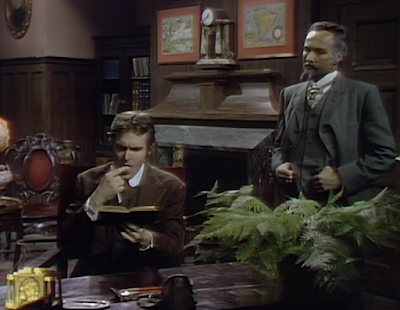 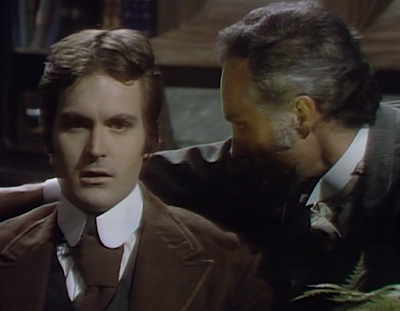 John: The way the opening scene was shot, I was sure Satan arrived wearing a cowboy hat. I do think it was classic that Trask would be the stand-in when we were otherwise expecting the Devil, and in all fairness, it was set up in the last episode when Edward received the random phone call, so two points for the writers, who I often complain just make things up as they go.

Christine: They were clearly trying to lead us astray yesterday then, because it looked like a woman appeared after the invocation.

John: What kind of lawyer is open for business after midnight? I think they decided to play fast and loose with the time in today's episode. It seemed like Mrs. Trask's arrival at Collinwood would have been the next day, but that doesn't line up with her expecting to find her husband, who would have left the house in the middle of the night.

Christine: I don't think they were playing fast and loose with the time. It seemed to me they were explicitly trying to show that it's not the first time Minerva has been toting around some plum preserves late at night as an excuse to go searching for her philandering husband.

John: So was Tim just reading the Latin book as an intellectual exercise? He wasn't telling Trask what it said, or writing anything down. Ah, but that's all secondary to whatever voodoo curse Evan was putting on him. The only question now is to whom Tim the unwitting killer will be sent to deal with. The annoying Mrs. Trask, perhaps?

Christine: It was rather odd that he put Tim under a spell just to let him know he would eventually be getting a signal to kill some unnamed person later on. Is he going to have to invite him over again to read another finger lickin' good book before he actually gives him the signal to go out and kill? 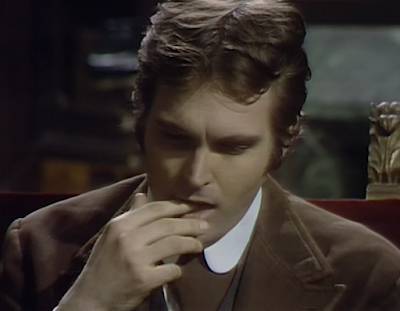