Quentin demands to know why Beth needs to go into town, and tells her that they don't have time. He suddenly appears to be in pain. She asks him what's wrong. He tells her to get a doctor before it's too late. He falls to the ground, writhing in pain. 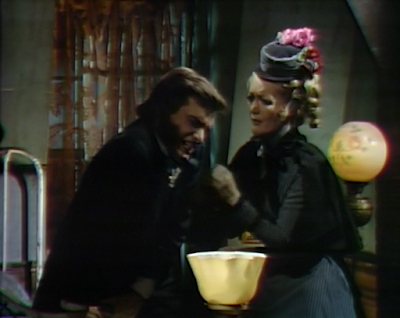 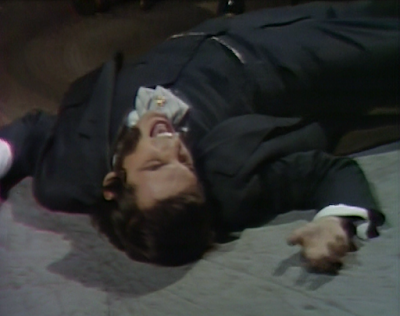 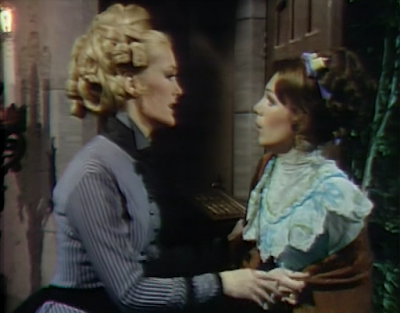 A woman named Dorcas explains to Trask that Rachel ran off to Collinwood. Trask says he knew she would go to tell them about Jamison. Trask tells Dorcas she has done well, though she lacks understanding. He says Rachel is a constant reminder that even he can improve. He says sometimes she makes him feel base animal instincts in himself. Dorcas cannot believe it. He says that he will never dismiss her. 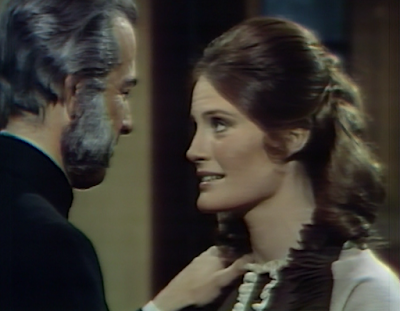 Beth and Rachel return to the room, which has been ransacked, but there's no sign of Quentin.

Trask says he hopes Dorcas doesn't think less of him. She fawns over him. He points out that Rachel has accused him of cruelty by locking up Jamison in the meditation room. Dorcas admits such things are necessary. Trask says he must do something about Rachel, but he's not sure what. He asks Dorcas to bring Jamison food, but only enough to make a liar out of Rachel. 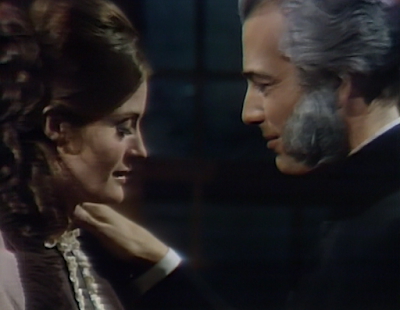 Beth tells Rachel that she thinks someone dragged Quentin out of the house. Rachel says they would have heard something. She offers to call the police, and Beth says Judith wouldn't want that. Rachel asks if there's something she isn't telling her. She offers to go to the old house to get Edward. Beth asks her not to. Rachel says she'll never understand the Collins family. Beth says she may someday be a member of the family, adding that Quentin asked her to go away with him. 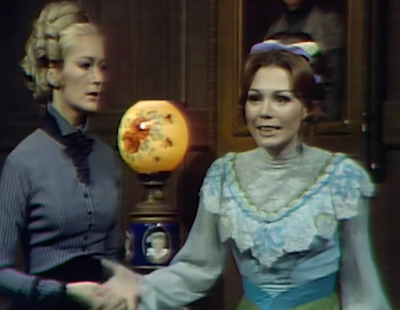 Dorcas has food, and Trask tells her he has changed his mind about feeding Jamison. He says he's going to call Judith, and try to save Jamison's soul, for cheating on his exams. Dorcas doesn't believe Jamison would cheat, and Trask says she's too innocent. Trask indicates he has contrived a trial for him, and Jamison will learn humility when he confesses to something he didn't do. He picks up the phone. 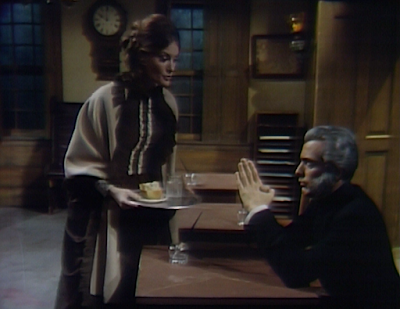 Beth answers the phone and indicates that Judith isn't home. She then hands the phone to Rachel. It's Trask. She's surprised he knew where she was. He explains that she can't fool him. She asks if he was calling to tell Judith that he's starving Jamison. She says she'll tell Edward when he returns, and Trasks says she'll tell no one. He adds that Jamison's test will end when he learns his lesson, and hers will end when she learns hers. He hangs up. Rachel says she must go back. Beth asks why she wanted to see Quentin, and Rachel says it's really not important, and then leaves. 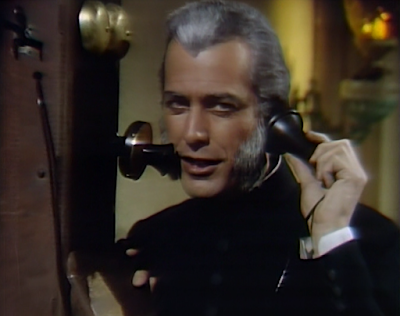 As she makes her way through the woods, Rachel hears someone. She calls out and asks who it is and what they want. They don't reply, and as the sounds grow closer she screams. Trask grabs her, and she tells him there's someone out there. He tells her to come with him back to the school. 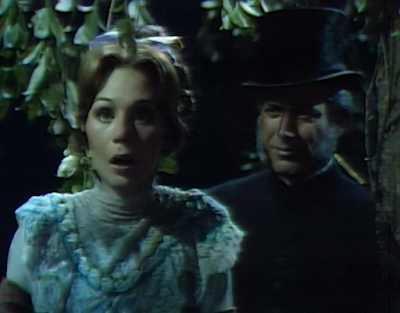 Beth speaks to Evan, explaining what happened to Quentin, and asking if he has seen him. She says she doesn't know what she's going to do. Evan tells her that he will come tomorrow.

Back at the school, Rachel tells Trask that she can't get the footsteps out of her mind. Trask tells her a lesser man couldn't withstand her and her wickedness. He points out that she believes a liar; that she stole food for him; that she ran away from the school; and now she lies about being stalked in the woods. He says he shouldn't feel compassion for her, but he does. He says she cannot deny stealing food from his kitchen. He offers to sell her the food she stole for one week's wages. She says it's absurd, since Jamison never got the food. He slaps her. He then adds that whatever he does, he does for her. He leaves her. 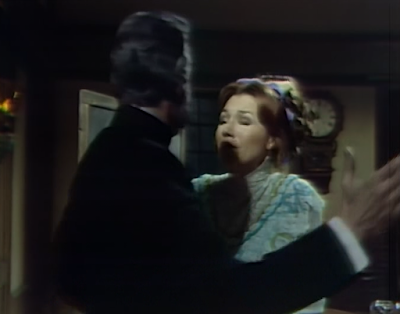 Rachel opens a door and Dorcas falls in. Rachel accuses her of spying on her. She says she didn't. Rachel says lying isn't good for her soul, and Dorcas admits she did. Rachel tells Dorcas that she and Trask deserve each other. Rachel leaves. A window breaks and Dorcas screams. 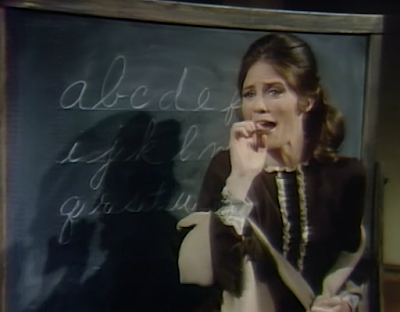 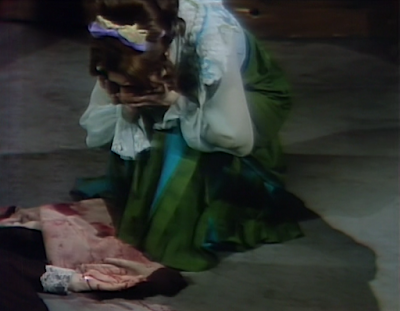 Beth comes downstairs to find Quentin lying on the ground in the foyer. He's covered in blood. He asks what he's doing on the floor. She says he's been gone all night, and asks how he got like this. He tells her that he doesn't remember anything. 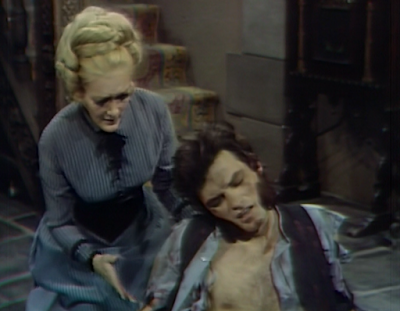 John: We don't get a whole lot of single-episode red-shirts on Dark Shadows, so I was interested in finding out more about Dorcas. So much for that. While she won't be missed, I will say she didn't seem particularly frightened by the sight of a werewolf. Perhaps a side effect of spending a lot of time in Reverend Trask's company.

Christine: Quentin's jerky wolf transformation was even more impressive today than in the last episode. Could he be trying to outdo the standard established by Don Briscoe? 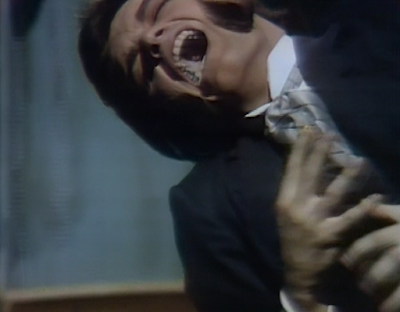 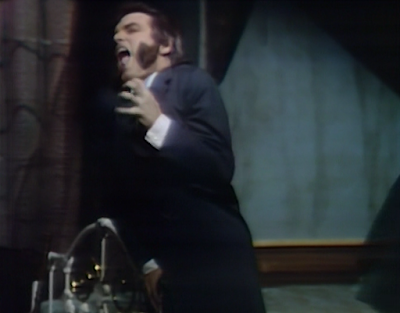 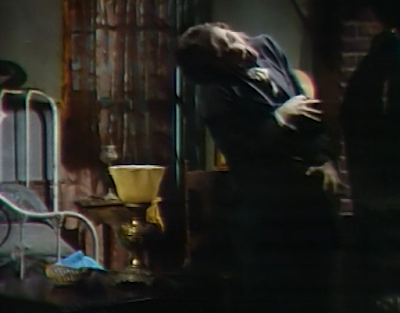 John: Speaking of the Reverend. Is it just me, or is this Trask particularly sleazy. The way he sidles up to Dorcas, in particular, is disturbing. Though unlike Rachel, Dorcas seems to be a little more receptive to his particular charms. 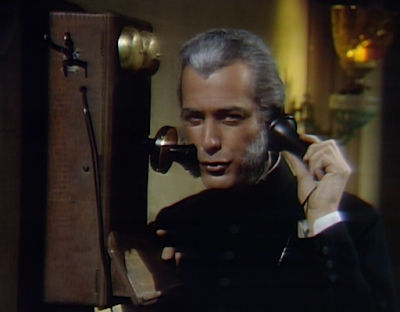 Christine: This is the same guy who keeps a Punishment Book, so sleazy may only begin to describe him. It's not very gallant of him to blame women for his inability to control his 'frail vessel', which makes Dorcas' adulation particularly gagworthy.

John: So no surprise that we didn't get to see the full were-Quentin on this Monday, but instead housewives across American got their first glimpse of an open-shirt Quentin.

Christine: I'm surprised. I could forgive the lack of werewolf on Friday, but only because I expected a follow up today. Where's Alex Stevens when we need him?
Posted by John Scoleri at 6:00 AM

That might be the most understated line of the whole series.

For a one-off character, Dorcas sure got her name spoken enough. Seriously, it seems like Trask said her name at least 5 times in just that one scene alone!

It's interesting that Dorcas is another version of the name "Tabitha." A few other fictional witches get referenced on the show! (Including "Sabrina," who actually showed up in the comics about 1962!)