Jenny finds the coffin in the basement, and assumes it's Quentin's. She lifts the lid and finds Barnabas inside. Rather than being terrified, she appears confused. 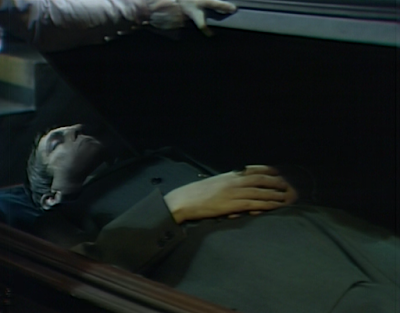 Outside the old house, Magda calls for Jenny. She goes back inside and continues her search. She descends into the basement, and checks inside the coffin to confirm Barnabas is alright. He appears undisturbed. 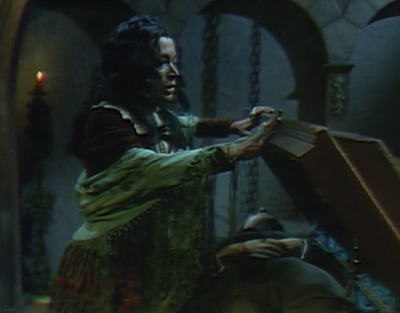 She then hears Jenny sobbing in the shadows. As she helps her upstairs, she points at the coffin and says Barnabas is dead, not Quentin. She says she'll tell Quentin how concerned she was when she thought he was in the coffin rather than Barnabas. Magda tells her that she can't tell anyone about the coffin. Jenny says that when someone is dead, everyone finds out. Magda explains that he is not dead, and tells her she must promise not to tell, or they will all die. Jenny doesn't understand her concern. Magda reminds her that when she decided to marry Quentin, she and Sandor didn't tell anyone they were related. Jenny makes Magda commits to supporting her running away with Quentin in exchange for her not telling anyone what she saw. They go upstairs. 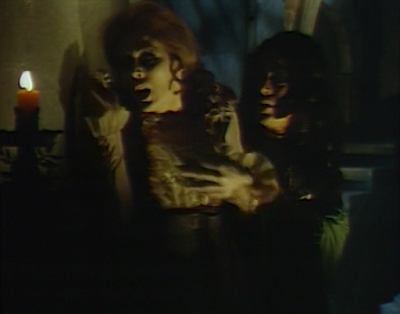 Outside the old house, Quentin searches for Jenny, with a rope ready to strangle her. He comes inside, and Magda finds him. Magda says he knows what he did to Jenny. He tells Magda that Judith is expecting her, and will be paying to ensure no one knows their secret. Magda slaps him across the face and he grabs her. Magda blames Quentin for Jenny's condition. He starts upstairs, and she threatens him with a curse if he goes near her. 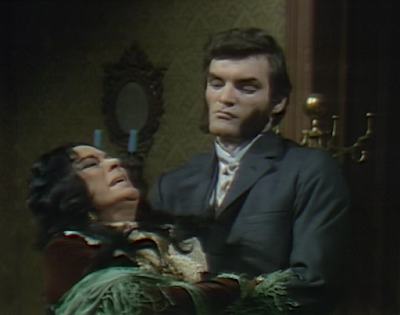 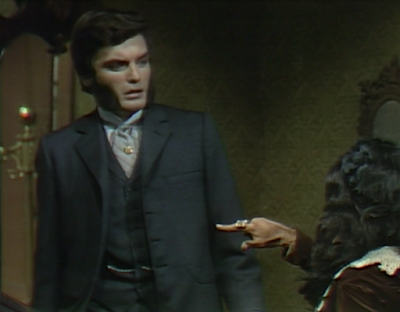 Quentin says she's awfully concerned for a woman she's never met. Magda tells him that Jenny is his sister. He refuses to believe it. Again, Magda blames Quentin for what happened to her sister. She says he has seen her for the last time, and tells him to get out. He asks what she's planning to do, and she tells him to leave, and tell her newly discovered in-laws what he knows. Quentin says Jenny should have told him, as it would have made her more interesting. Magda throws something at him and he leaves. 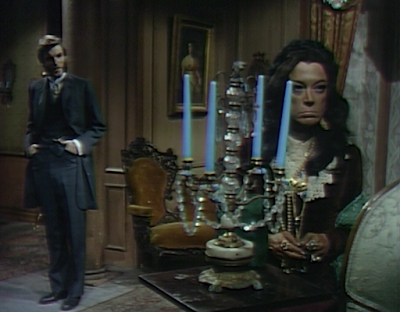 Upstairs, Jenny sees Quentin leave from her window. She tries to call to him, and then tries to get out of the room, but the door is locked. Magda comes in and comforts her. She assures her that Quentin will be back. 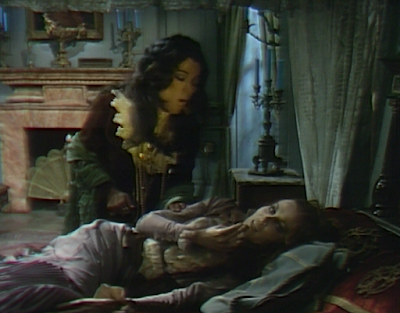 Barnabas rises from his coffin, and calls for Magda and Sandor. Magda comes downstairs. He asks if she found Jenny. She tells him she did. He says he's going to ask Jenny some questions, and he doesn't want to be disturbed. Magda says that he must release Sandor from his spell so they can take her sister away. Barnabas is surprised to hear that Jenny is her sister, but he says they can't go away. Barnabas explains that he has changed history by locking Jenny up, and he still must save the children of the future. He threatens to sacrifice her if she does anything that thwarts his plans. 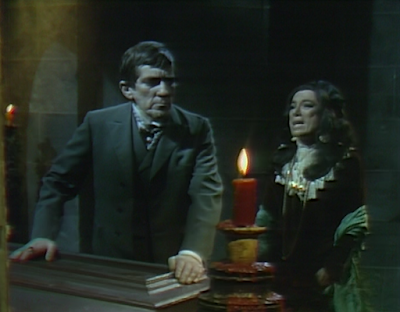 Magda tells Barnabas she wants to be in the room while he questions her. Judith comes to the old house and asks to speak to Barnabas alone. Magda asks if she wants to talk of her sister, who she trapped in the old house. Judith says that now she knows they're related, that could explain the madness in her. Barnabas sends Magda away. Judith asks why he kept Jenny in the old house. He makes a feeble excuse, saying he's concerned about the woman and her children. Judith explains there are no children. She adds that they must face the public scandal and have her institutionalized. 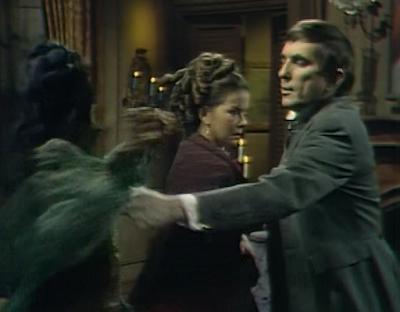 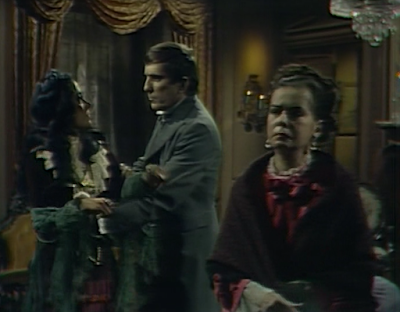 Jenny lies in bed. She gets up and tells Magda that she was a gypsy once. She points out how she hated it. Magda reminds her that they're still gypsies. She writes a note to Sandor, and tells Jenny they will meet other gypsies to spend the summer with a caravan. Jenny sneaks out of the room when Magda isn't paying attention. 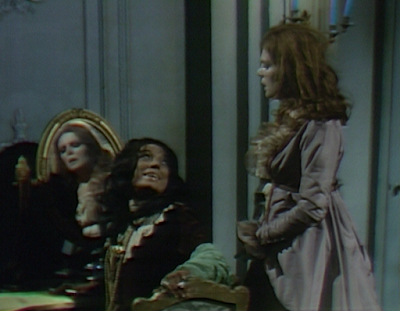 Barnabas asks Judith to let Jenny stay with him for a while. She says there's no reason for him to try to correct her brother's mistake. Jenny comes downstairs and hears them speak of her. She screams, and says Barnabas is dead, and that she saw him in the coffin. 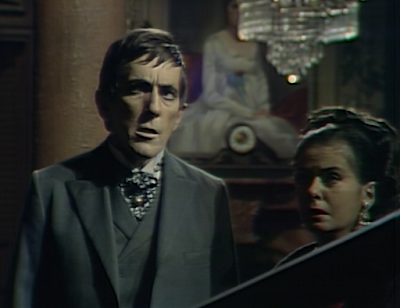 John: I was kind of hoping that Magda would open the coffin to find Jenny inside snuggling with Barnabas.

Christine: Sometimes I worry about you. Though, I must admit I was thinking the same thing. Could it be that three years of daily Dark Shadows viewing is having a deleterious effect on our minds?

John: I was surprised to find out that neither Quentin nor Judith was aware of Jenny's gypsy past. Do you think grandmother knew? Is that why she let Magda and Sandor stick around?

Christine: That was a nice reveal. I don't think Edith knew. I think she was just a tarot enthusiast.

John: Good thing for Barnabas that Jenny is an unreliable witness, or he'd have to explain to Judith just why he sleeps inside a coffin down in the basement. 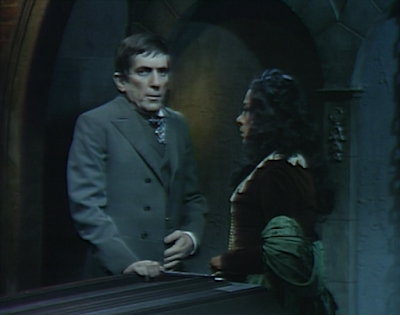 Christine: Quentin initially seemed genuinely afraid of Magda cursing him. Perhaps it was an attempt to have the audience think she was finally going to do it. He may wish he had taken the warning more seriously. 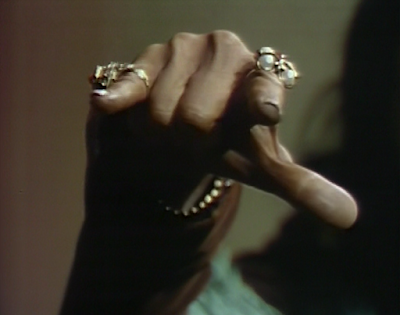