Jenny wanders through Collinwood. Dirk speaks to her from the darkness, asking her where she's going. She says she's going to the old house to kill Quentin, and he tells her that she needs a weapon, and asks her to wait while he goes to get her one.

Dirk returns with knife for Jenny. He hears someone coming, and throws Jenny into the drawing room. Judith enters and tells Dirk he's to help Reverend Trask tomorrow at the house by the sea. She then sends him upstairs. He goes reluctantly. 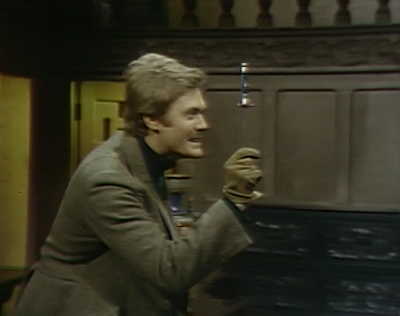 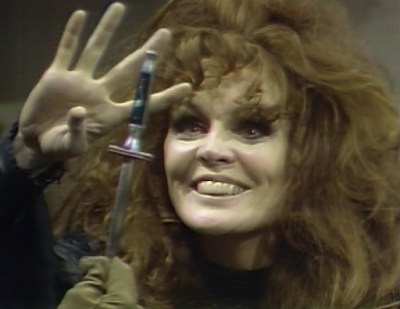 In the drawing room, Jenny hears Quentin's music, and then his voice, saying they lied to her. He says he's not in the old house. She goes from chair to chair, stabbing it as she hears Quentin's laughter. Judith hears something and comes into the drawing room. Jenny comes out, laughing. Judith asks what she's doing, and Jenny says she's looking for Quentin. Judith sees she has a knife and tells her to stay away. Jenny picks up a candlestick and hits Judith, knocking her out. 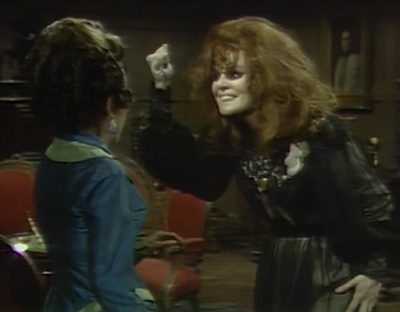 Quentin opens the door at Collinwood and sees Jenny brandishing a knife. He steps back outside. 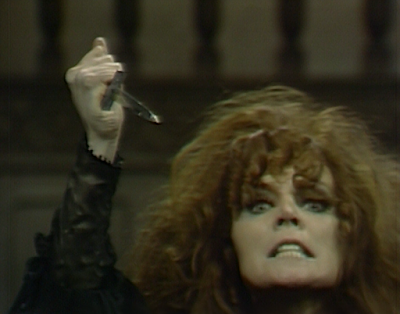 Jenny goes outside, and when she's gone, Quentin sneaks past her. He finds Judith, seemingly fine. She tells him Jenny escaped, and he confirms that he saw her. She says they have to get her back to her room, and he asks what room. She explains they keep her locked in the basement. Quentin asks how she got out. Judith explains only Beth and Dirk have keys. Quentin says if Dirk knows, then so does Laura. He says that once he finds her, he's going to see that Jenny leaves Collinwood. 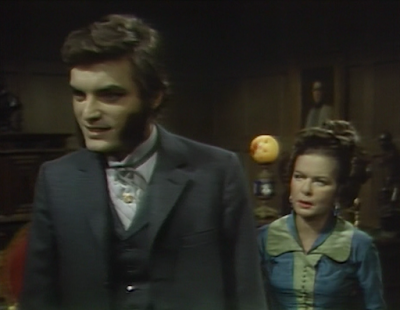 Jenny arrives at the old house. She hides her knife and knocks at the door. Barnabas answers, and she asks to see Quentin. She introduces herself, and he invites her in to see if Quentin is there. She walks around looking for him. Barnabas asks where she came from, and she says she lives in Collinwood with her children. Barnabas asks if she means her dolls, and she corrects him. She asks him what is upstairs. He offers to let her look, and she says she must leave to find him. Barnabas suggests that she should stay until Quentin returns. 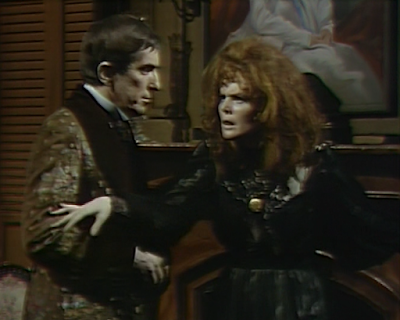 Jenny explains that she was a singer, and starts to sing a lullaby. She says it used to soothe the babies, and he corrects her again, referencing dolls. She says they took her children away. He asks where they took them, and she says they didn't take them; that they're with her. She says she just dressed them for the funeral this afternoon. She heads towards the basement, and Barnabas says he's not there. She's sure that's where he's hiding, and says that if Barnabas tries to stop her, she'll kill him. He takes the knife from her, and she cowers, thinking he's going to kill her. He tosses the knife into the fire. He says that no one will hurt her. He reminds her that Quentin married her, and he will return for her. He says that she should make herself presentable to him, and he takes her upstairs. 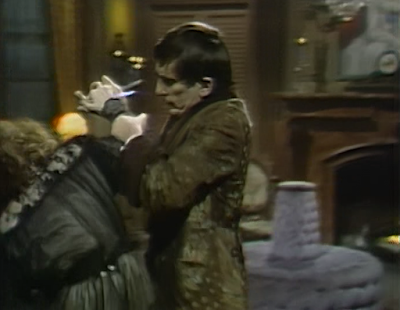 Quentin comes downstairs with a pistol. Judith tries to stop him, but he says he will handle things his way. 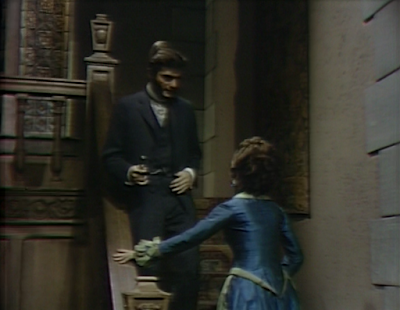 Barnabas shows Jenny to Josette's room. Jenny looks into the mirror and asks who the terrible person is. He tells her that she'll go away if she uses the comb, and some powders, and puts on a new dress. 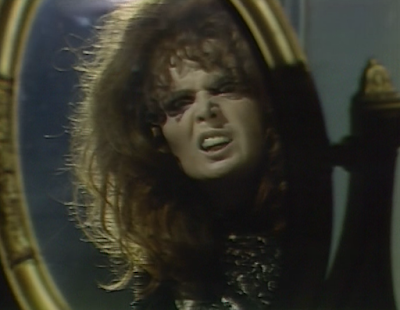 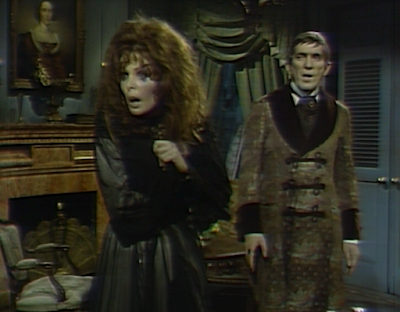 Quentin interrogates Dirk, asking if he let her out. He denies it, and says he should start looking for her. Quentin suggests Dirk can look near the cottage. 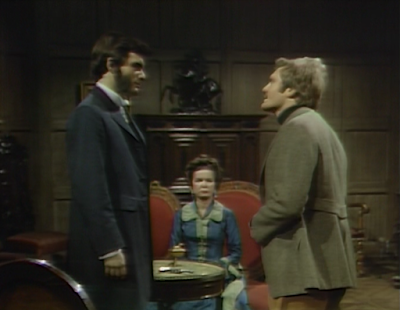 Jenny combs her hair. Barnabas tells her to stay in the room until Quentin comes for her. He says that people will look after her until Quentin comes. She asks Barnabas if he likes the way she looks, and when he says he does, she tells him not to flirt with her, because Quentin is very jealous. He leaves and locks the door. He calls to Magda, which Jenny hears, and remembers... 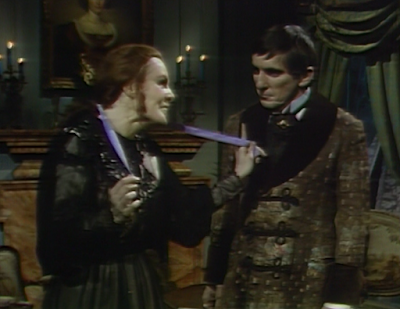 Barnabas writes a note and leaves a pair of keys. As he hears a rooster crow, he heads downstairs.

Quentin arrives at the old house and sees the note Barnabas wrote to Magda. It describes a woman upstairs in Josette's room.

Jenny looks into a hand mirror, telling herself that Quentin loves her. 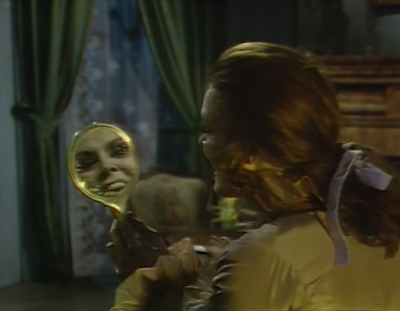 Quentin approaches the upstairs bedroom. He knocks on the door. Jenny asks if it's Quentin. He says that it is. She says she was beginning to worry. Outside the door, he raises the gun and tells her she'll never have to worry again. 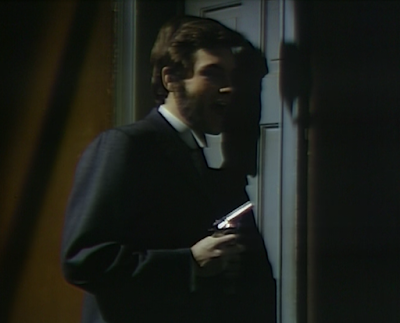 John: Why would Jenny hit Judith with a candlestick (in the drawing room) rather than stab her with the knife in her hand. Was she trying to play a bizarre game of Collinwood CLUE? Of course it had no lasting effect, and Judith was back up as if nothing happened mere moments later.

Christine: She didn't use the knife on Judith because she was singularly focused on using it on Quentin, and chose to conk Judith on the head so she couldn't prevent her from using the knife on her intended victim. Judith appeared to be stunned for a brief moment when Quentin walked in on her, but certainly did recover quickly. She's obviously one tough cookie. 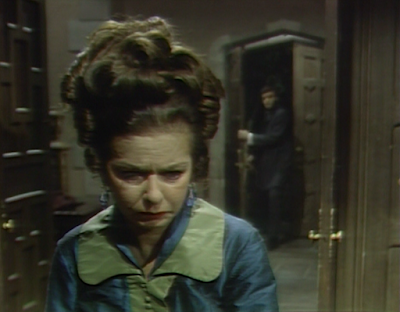 John: They play Jenny as such a loony-bird, it's hard to buy her hiding her knife when she arrives at the old house. Frankly, I'm getting a little tired with her one-note performance. At least she combed her hair before the episode was over.

Christine: So, you must be hoping Quentin is a good shot then. I think the fault lies more with the writers than the actress. It was interesting to see Barnabas treat her with kindness. Sometimes he's almost human. We can only wonder at this point how she knows Magda and Sandor. I enjoyed her surprise when seeing herself in the mirror for the first time, though it could have been the electric light reflected in the mirror that caused her astonishment. 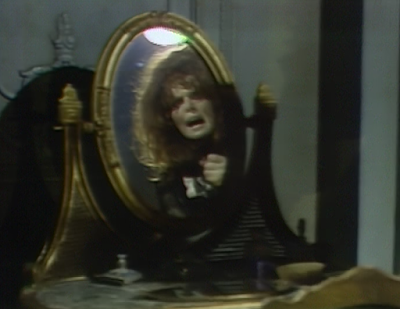 John: One would think that Barnabas might invest in locks for the front door. Since he's gone to the trouble of locking bedroom doors...

Christine: He must have put a lock on the door to Josette's room after abducting Maggie. Putting a lock on the front door would prevent anyone and everyone from walking into his house uninvited, which could raise suspicions that he might have something to hide...like a coffin in the basement.