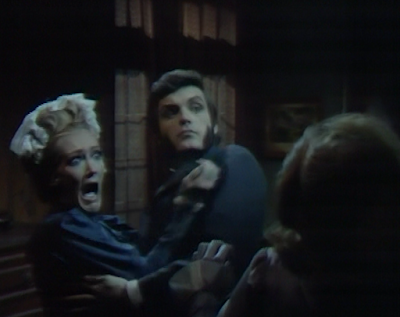 Jenny hears Beth tell Quentin that she hates him for making her feel the way she does. She says that taking care of Jenny was the only life she had until he came back. She tells him that he doesn't know how much Jenny trusted her and how close they were, but he claims that having him makes up for it. They kiss, and Jenny steps out of the shadows, knife raised, ready to strike. Beth sees her and screams. Jenny struggles with Quentin, and she lunges at Beth. He pulls her back and gets her to drop the knife. He then grabs her by the throat and strangles her. Beth pleads with him to let her go. He does, leaving her seemingly lifeless body on the bed, and runs out of the room. Beth screams, "Oh, my God!" and follows after him. 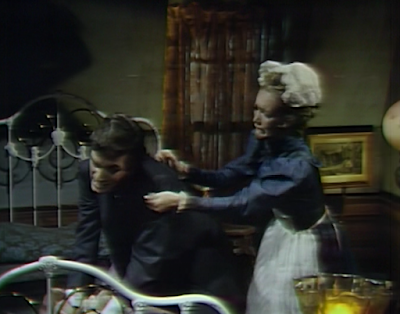 Edward returns to Collinwood and Beth runs to him. She frantically tells him that she's dead, that she tried to kill her. Edward runs past her to her room. 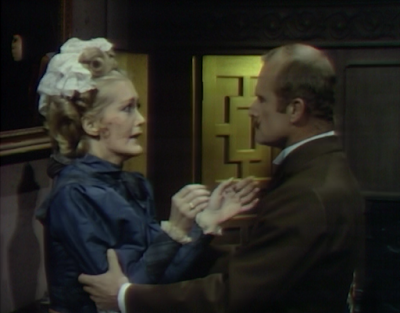 In the drawing room, Quentin looks at his hands. He sneaks upstairs. 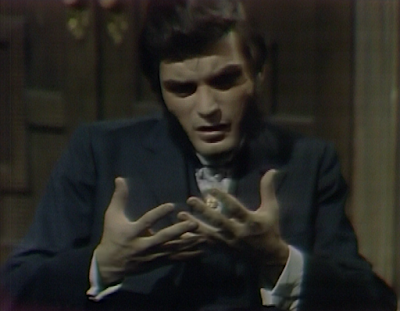 Edward confirms that Jenny is dead. He commands Beth to tell him everything that happened. He asks if Quentin killed her, and she says he did, but he didn't mean to. Edward asks why Jenny attacked her. She explains that Jenny was hiding in the room. He asks what she and Quentin were doing in her room, and asked if she was in Quentin's arms. He tells her that she can spare him the sordid details, and asks where Quentin is. She says he ran off. He picks up the knife and tells her to return it to the kitchen. He asks her what the dolls are doing in her room. She explains that she was going to bring them into the village for the children. He acknowledged Jenny's children, and she says they're Quentin's children, too. He asks if Quentin saw them and knows, and she said she's sure he doesn't know. He tells her to get rid of the dolls. He storms out as Jenny sobs. 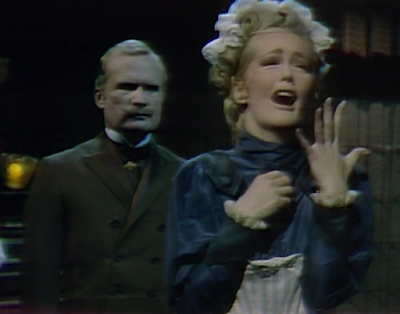 Quentin sneaks downstairs wearing a jacket and carrying a bag. Edward catches him and grabs his bag. He says he can't stay, and Edward tells him he's going to stay in the house.

In the drawing room, Quentin tells Edward he didn't mean to kill Jenny as Beth listens on. He adds that the police won't believe him. Edward says he's not leaving, and that while he would like to see him punished, he will not go to jail. Edward lays out a story of Beth having found Jenny at the bottom of the stairs. After helping her to her room and going to summon help, she returned to find her dead. Beth and Quentin don't believe that anyone will buy his story. Edward says he will not allow a scandal to tarnish the family's name. He says only the three of them, plus Judith and Dirk knew of Jenny. Quentin adds that Barnabas also knows Jenny, as well as the two gypsies. Edward is confident that Barnabas will support the family, and is sure the gypsies' silence can be purchased. Quentin points out the further wrinkle that Jenny was Magda's sister. Edward is shocked. He scoffs at Quentin for marrying a gypsy. As he assures them it will be covered up, there's a knock at the door. He tells Beth to remember what he told her, as he goes to answer the door. 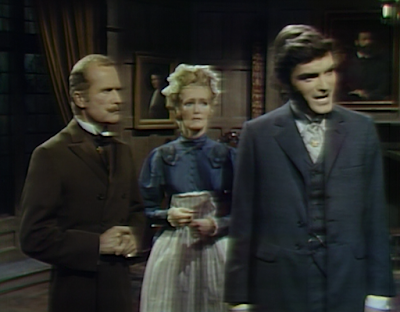 Magda and Sandor arrive and ask to see Jenny. They say she was looking for Quentin. He tells them that she has been found. Sandor asks him what's wrong. He explains that there was an accident, and Jenny is dead. He says she fell and hit her head coming down the stairs, and died a few minutes later. Magda asks to see her. He says he'll show her to Beth's room, and she says they want to go alone. They leave him and he re-enters the drawing room. 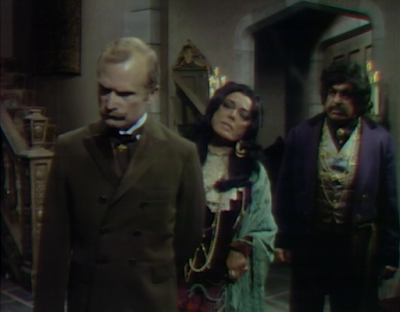 Quentin tells Edward that he can't face them. Edward says that he will, and he will do so calmly.

Magda and Sandor come into Beth's room and find Jenny's body on the bed. Magda cries as she arranges Jenny's arms across her chest. She finds a button in Jenny's hand. She tells Sandor that she must have been fighting for her life. Sandor points out bruises on her neck. Magda says she must be avenged. 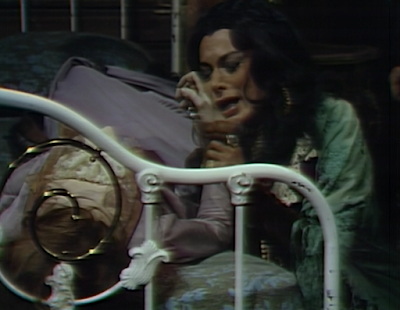 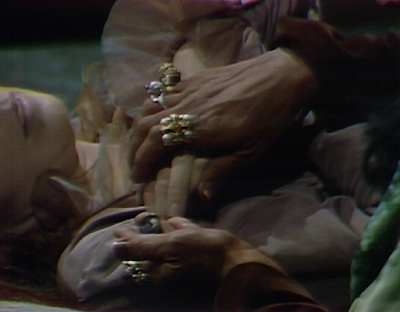 Edward has Beth practice her story. He then asks Quentin where he was while this was going on, and he says he was outside searching the grounds. Sandor and Magda come into the drawing room. She asks who saw Jenny fall down the stairs. Edward says no one, and they assumed she tripped and fell. She then asks why she's in Beth's room. Magda asks Beth if it's true. Sandor points at Quentin and tells her to look at his coat. They notice a missing button that matches the one in her hand. She accuses him of killing Jenny. 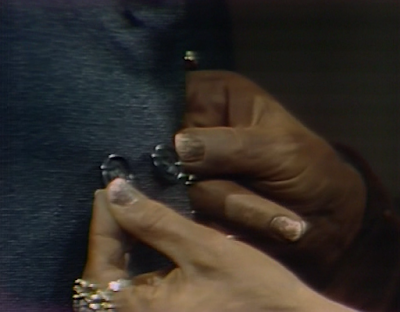 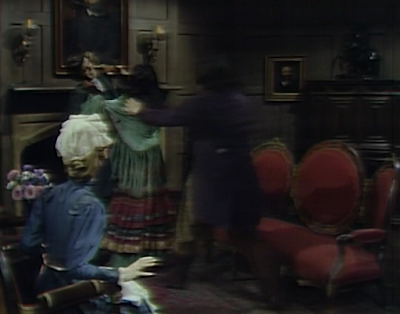 She says Edward is lying to protect him. She says he'll be sorry when she tells the police that Quentin strangled her sister. Edward says the police won't believe the word of a gypsy over a Collins, and that a button won't be sufficient evidence against them. Magda tells Quentin that she warned him if he harmed Jenny, she would curse him for the rest of his life. 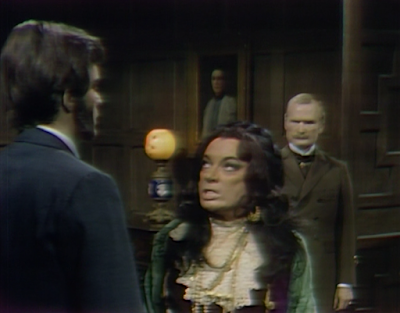 She leaves, and Sandor follows her. Quentin tells Edward that she will put a curse on him, which Edward dismisses as just words. Edward says he's going to inform Judith and Barnabas of Jenny's unfortunate accident. Quentin asks Beth not to leave but she too runs out on him. Quentin hears Magda repeat her curse, and he clutches his head. 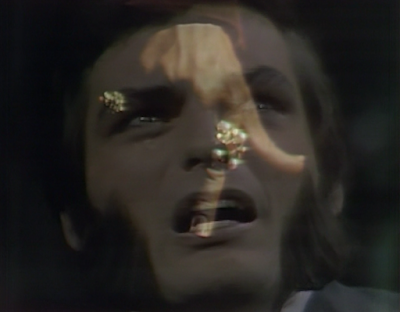 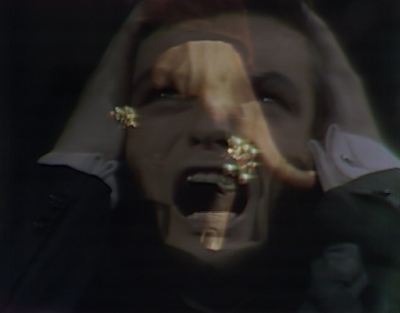 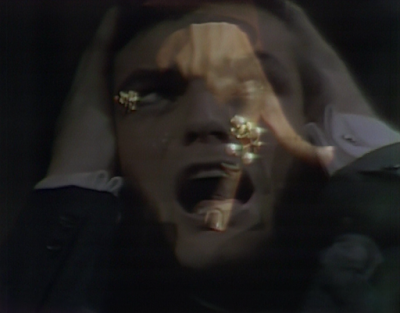 John: No sooner than Jenny had started to annoy me, and she has been summarily dispatched. Thanks Quentin! Of course, what's good for me doesn't appear to bode well for Quentin, or his relationship with Beth (let alone the rest of the family). Time for Edward to doctor the family history!

Christine: Edward is not very astute at covering up a murder. He should have known Jenny would have marks on her neck that didn't support the explanation that she fell down the stairs.

John: So Jenny and Quentin do have children? And they're alive in the village? I can only assume Magda doesn't know about them. I can't wait to find out more about them. And determine if at least one of them is buried on the grounds between the main house and the old house...

Christine: I think it's also fair to assume that Quentin doesn't know about them, even though Beth does. I wonder if she'll inform him of his paternity. If the infant that Barnabas and Chris found buried on the grounds is one of Jenny's kids, it hasn't been buried there yet, since that baby had been buried with a pentagram, and there doesn't seem to be a need for that kind of protection just yet. Perhaps that is what's to come, though.

John: Wow. I'm surprised that Edward was so confident that the Collins' family name would outweigh all the physical evidence against Quentin. You think it would have been easier to just kill Sandor and Magda. But now the curse is in place, and it's only a matter of time until we see those muttonchops go full werewolf!

Christine: Edward would probably resort to buying them off rather than killing them off. It seems the Collins family has a long history of using their good name to avoid criminal punishment. Roger was guilty of manslaughter, David attempted murder, and Liz covered up what she thought was a murder, yet none of them were ever held accountable. Then there's all the crimes Barnabas has gotten away with...
Posted by John Scoleri at 6:00 AM