Beth comes downstairs. Barnabas asks her how Jamison is. She says he's with his father and aunt, who want to thank Barnabas before he leaves. She says the animal that attacked her is probably very far away now. She says she doesn't think it wore clothes and walked like a man. She insists that Edward is wrong. Barnabas suggests that she gets some rest. She says it's almost dawn. Laura comes in and berates Barnabas for taking Jamison from her. She demands that Beth go upstairs and tell Edward she's there to take care of her son. She does, and Laura then asks Barnabas where he's going. He tells her she can plot her revenge, and she says that she will have it before the day is over. He turns his back to her and leaves. 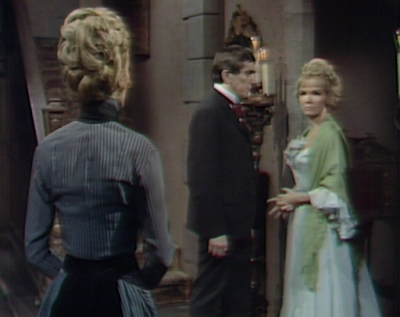 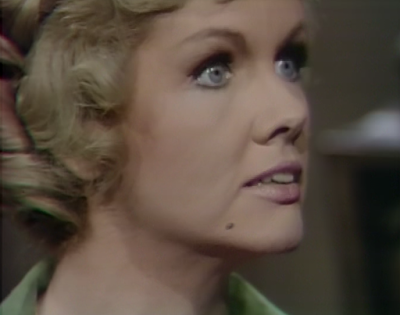 Beth comes downstairs and tells Laura that Edward said she cannot see her son. She then says she was told to lock the door after she leaves. Laura says she doesn't take orders from servants, and will stay right where she is. Laura stares at the portrait of Barnabas, and says the ring is the same. She turns back and sees Beth is still there. She wanders into the drawing room. Beth tells her that if she goes, she'll promise to update her if there's a change in Jamison's condition. Laura continues to ponder Barnabas. She asks Beth if she has ever seen him during the day. She says she doesn't think so. Laura tells Beth that she can go, and demands that she close the doors after her. Beth does, and Laura sits by the fire. She speaks to Ra, asking for help. 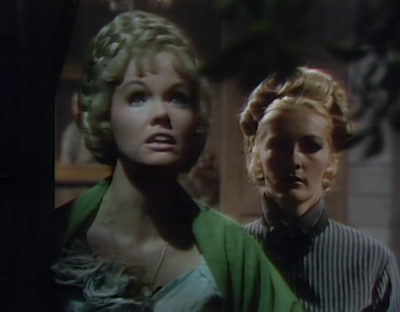 Beth steps outside to see the sunrise. She wonders if Quentin will return as he did yesterday, in torn and bloody clothes. She goes back inside and runs upstairs.

Laura asks for the death of Barnabas Collins. She sees Dirk, who wanders into the drawing room as if he's in a trance. She sends him to the old house. After he's gone, she asks Ra to show her where Barnabas is. 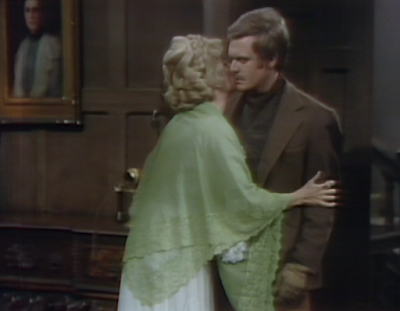 Barnabas writes a letter to Magda, asking her to get Quentin to come see him at dusk. He's sure Laura means to do him harm. He stares out the window, and then heads towards the cellar. Dirk appears in the window. As Barnabas makes his way to the cellar, a wall of fire appears, blocking his way. Dirk watches this from outside the window. Barnabas disappears, and the fire goes away. 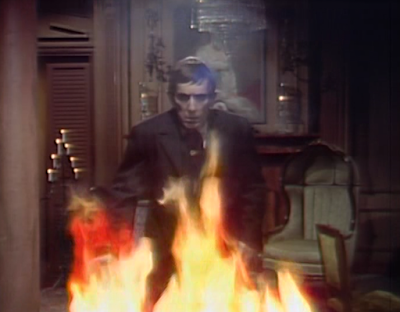 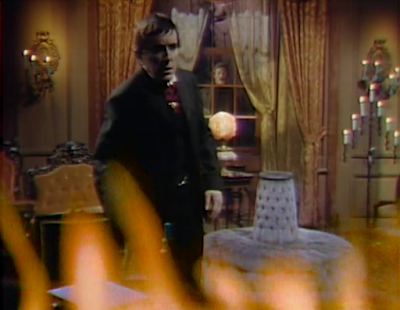 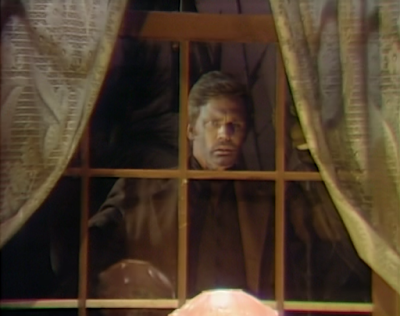 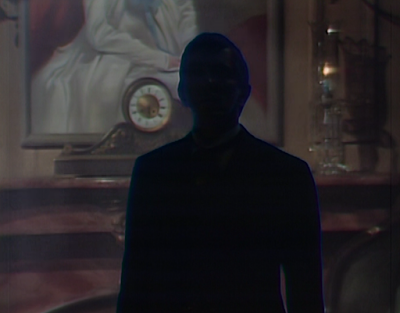 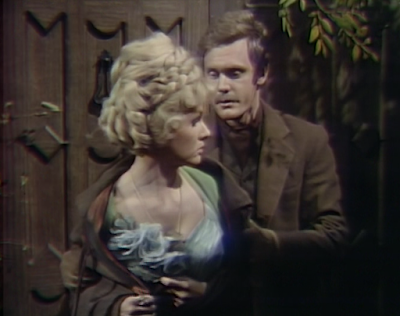 Quentin sneaks back into the house, again, clothes torn and bloody. He tries to crawl upstairs, but he collapses. Beth runs down and helps him into the drawing room. She closes the doors and locks them. He looks at her, and says that she knows. He asks her what happens to him. She asks what he remembers. He says he was in pain in his room. He asks what kind of monster he becomes. She tells him that he attacked her. That he changed. He asks into what, and she says an animal. She says Edward and Barnabas saw him, and after Barnabas beat him with his cane, he ran off. She says he's a wolf that walks like a man. 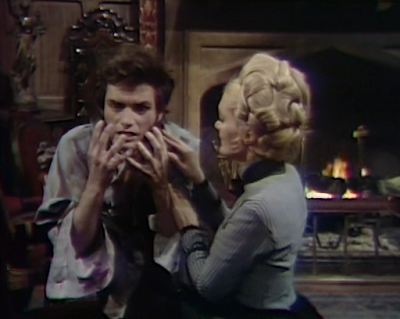 Quentin asks who he killed, and she says he didn't kill anyone. He says he's going to kill Magda, and Beth reminds him she's the only one who can remove the curse. He says they have to find out everything they can. 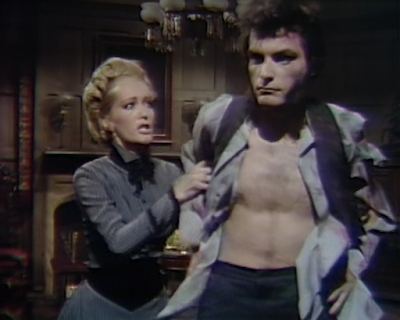 Outside, Laura tries to enter the room. She asks Beth if the door is locked. Quentin sneaks out the window, and Beth says she'll look for the key.

Dirk finds the secret passage in the old house.

Beth opens the door to the drawing room. She apologizes. Laura says she thought she heard Quentin. Beth says she's going upstairs to check on Jamison.

Dirk rifles through documents, and finds the journal of Ben Stokes that tells the story of Barnabas Collins, and how he died. 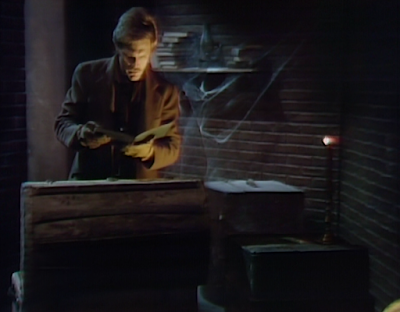 Dirk gives Laura Ben Stokes' journal. Dirk says that Ben didn't include Barnabas' secret, but Laura points out that he confirms that he has one. She says Barnabas will regret teaching Ben to read and write. She tells Dirk they will go to Ben's grave. Dirk says it only proves that Barnabas didn't go to England. Laura tells him to grab the books and come with her. 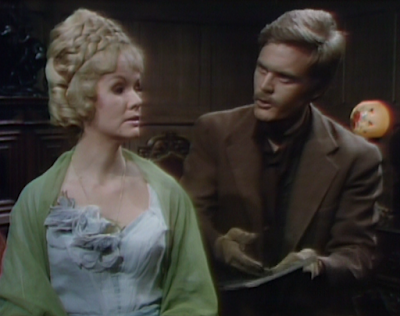 Beth tells Quentin there will be no full moon tonight. He asks her what if he changes, full moon or not? Barnabas rushes in and tells Quentin that they must speak about their mutual friend. Quentin brushes past him and says not tonight. 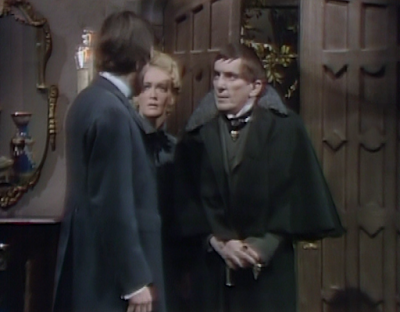 Laura tells Dirk to open Ben Stokes' exhumed coffin. He does, and she spots a book inside. She tells him to give it to her. She reads from it, and Barnabas emerges from the shadows. 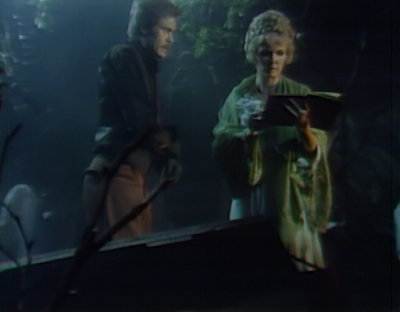 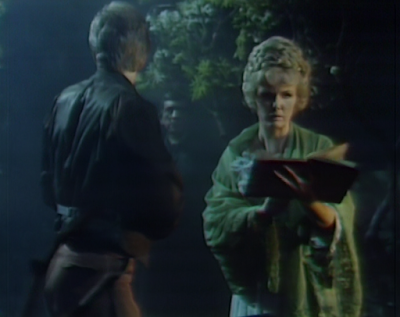 John: Poor Beth, trying to protect Quentin by lying. His chances of survival will actually go up if Barnabas learns the truth about him (although honestly, he should have figured it out on his own by now). 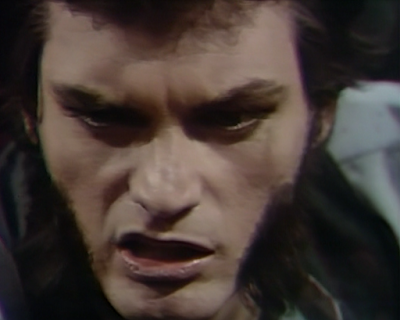 Christine: It is irritating how conveniently obtuse Barnabas becomes whenever the writers decide to stretch a storyline out.

John: So what was with Barnabas just disappearing? I would have been fine had he turned into a bat so he could fly past the flames. Of course, if the old house was really on fire, shouldn't it have burned down?

Christine: He must have realized they were faux flames after seeing Dirk's cheesy mug watching him through the window. 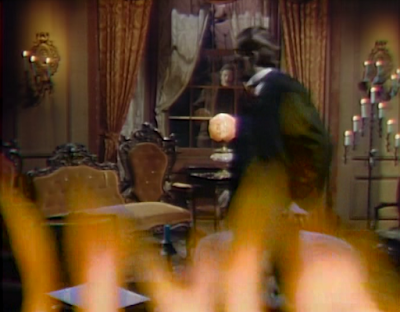 John: Collinwood—home of the fastest exhumations anywhere! Unless Ben Stokes was never buried... perhaps it has been sitting unburied for the last 100 or so years. Of course, if Ben had written a second volume of secret Barnabas tales, who was the one who popped it into his coffin with him?

Christine: Whether putting them in or digging them out, nobody can speed dig a grave like the inhabitants of Collinwood can! You would think that whoever buried Ben with his secret journal would have read it, especially if his burial instructions said not to do so. I don't understand why Laura was asking who was watching from the shadows at the end of episode when the lightning was clearly illuminating Barnabas' face. Is she unable to recognize him with his vampire makeup on? 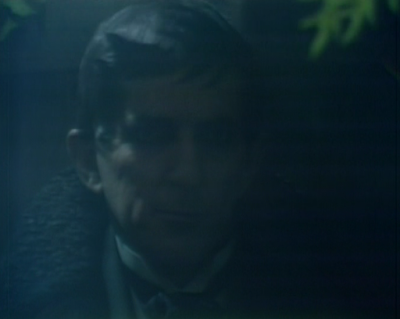 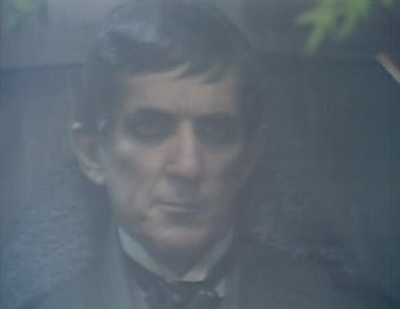 When someone says they are "taking something to their grave" it usually doesn't mean something tangible, like a secret diary!