In the old house, Magda tells Sandor her potion is ready. Sandor says they should kill Quentin, and Magda explains that killing is easier, but a curse is better. Sandor asks how she knows the curse will work since she has never performed it before. She tells him she saw it done many years ago by an old gypsy woman who cursed Count Petofi after he did not pay her for services rendered. Sandor asks what happened to him, but Magda tells him it will be better for him to see it himself when it happens to Quentin. 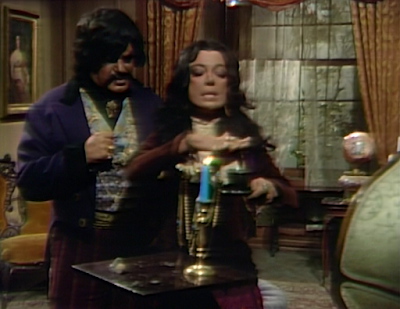 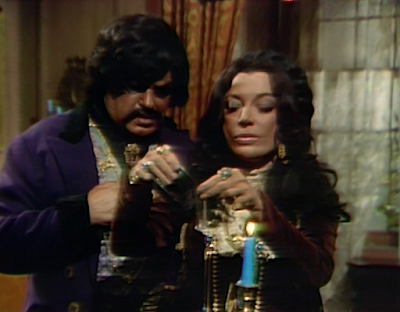 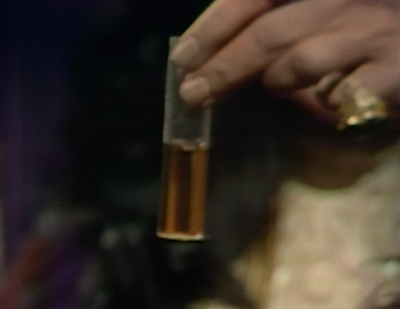 Quentin waits in his room, concerned. Edward comes in and says that he has told Barnabas about Jenny's accident, and he believed it. Quentin says he is concerned about the gypsy curse. He tells Edward that he may be able to buy Magda off. If Edward gives him money, he promises never to ask him for anything again. Edward asks how much it will take. Quentin suggests he would need $10,000 - cash. Edward says he doesn't have it, but he's willing to ask Judith for it. He adds that he will do it if Quentin agrees to sign over any claim to their grandmother's estate, and also leave the house immediately. Quentin hesitates, but eventually agrees. Edward goes to speak to Judith. 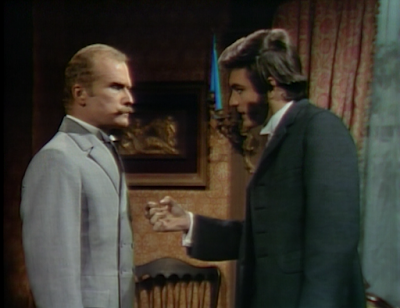 Magda and Sandor arrive at Collinwood to claim Jenny's body. Edward tells them that she was buried that morning. Sandor tells him they had no right to do that. Magda tells Edward he has not heard the last of them, or of Jenny's spirit, and they leave. 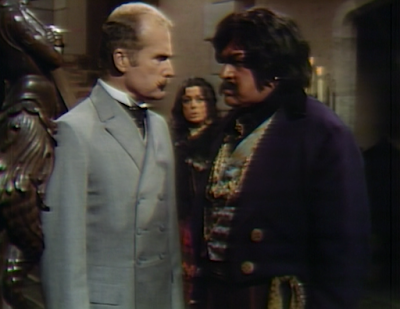 Quentin paces in his room before sitting down in a chair. He hears Jenny calling to him, telling him to stay awake, because she's coming back. He gets up and asks her where she is. He sees a doll in the room with him. 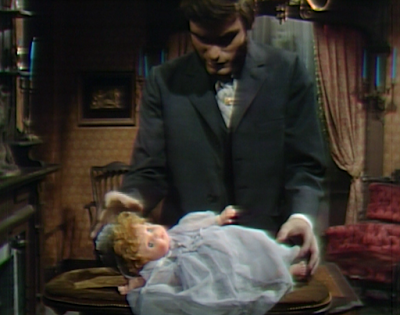 Edward returns, and Quentin says he heard Jenny's voice. Edward says he heard the sound of his conscience, and he asks if the conscience also produced the doll. He looks to where it was, and it's no longer there. Edward says he spoke with Judith, and she added another condition. The gypsies must also leave Collinwood. He says Hanley is writing up the paperwork and he'll have the money that afternoon. Edward starts to leave and Quentin asks him to stay. He says he can't bear to be alone. Edward suggests that if he wants someone to hold his hand, he should call Beth. Edward leaves him. Quentin picks up a book to read, though he quickly falls asleep. 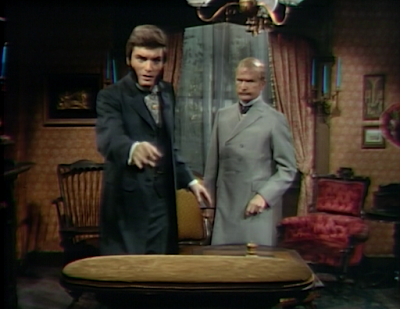 Quentin dreams of a tambourine. Magda enters his room and asks if he's ready. He begs her to stay away. She promises a simple ceremony. She adds that Jenny is waiting. He can't help but follow her as she leads him out of the room. She brings him to Sandor, who says the murderer must bless the spirit of the one they killed. He shows him Jenny's corpse. Quentin says he doesn't want to bless her. He touches Jenny's hand, and her eyes open. She pulls him to her and they kiss. Magda says the ceremony is complete with the kiss of death. Quentin wakes up, screaming. 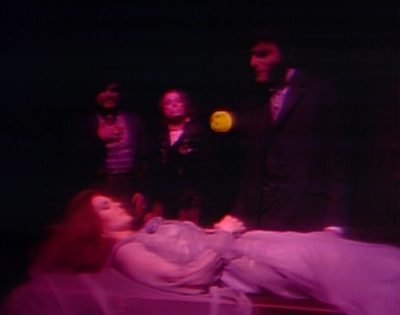 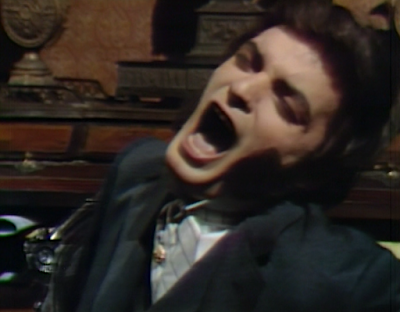 Edward knocks on the door, asking what's wrong. Quentin says he just had a nightmare. He says his curse will be that Jenny is going to haunt him. Edward shows him the papers and Quentin signs it without reading it. He then asks for the money, and as soon as Edward hands it over, he runs out of the room. 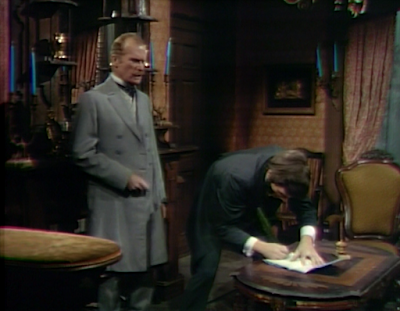 Sandor asks how they can get Quentin to drink the potion. Sandor sees Quentin approaching the old house. They let him in. Quentin tells her that Jenny's ghost has already appeared to him. He offers her money to remove the curse. He offers them $10,000 in cash. Sandor asks to see it. Quentin demands an answer from Magda, first. She asks to see the money, and he reiterates his request after he gets her answer. She waves her hand and says she has removed the curse. Sandor suggests a toast, and pours the potion into his drink. He shares glasses, and they toast and drink. 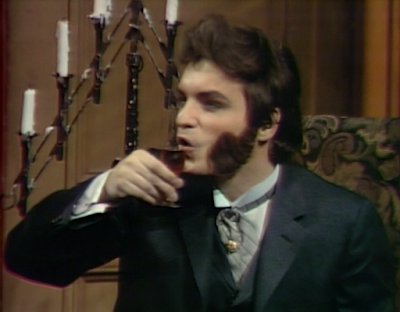 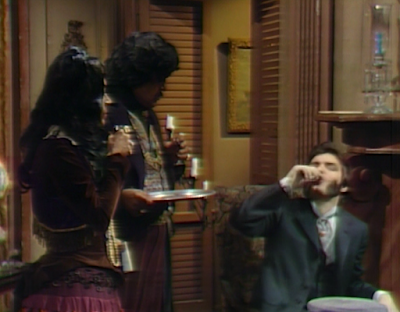 Quentin is glad that he's free of the curse, and Magda explains that it has just begun. She tells him he was haunted by his guilt. She throws his money at him, and tells him the curse was in the potion he drank, and that it will start tonight. 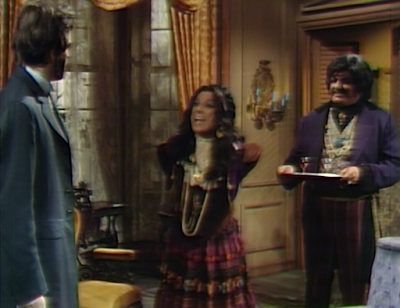 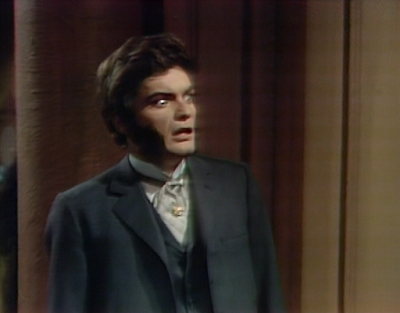 John: Next-day burial service is another thing that seems to be a regular service offered at Collinwood. You'd think they might have at least sent around invites to relevant parties.

Christine: As Sandor suggested, Edward was expediting burial out of a sense of guilt. Why wait when there's always a coffin to be had around Collinwood? No wonder Judith was not particularly surprised when Jenny said there was a coffin in the basement of the Old House since the basement at Collinwood must be stocked with coffins to keep up with demand.

John: Today was a day of low points for Quentin, groveling to his brother, asking him to stay with him, agreeing to leave Collinwood for good, penniless, and finding out his only way out of this mess failed... Can't wait to see what tonight's curse offers! 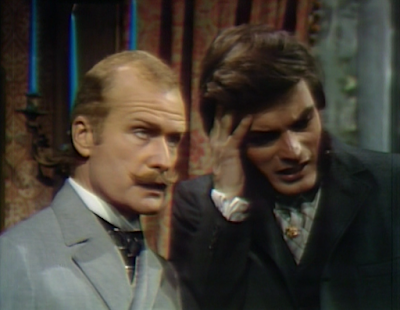 Christine: It couldn't have happened to a nicer guy. I believe today's episode marks the first time we've heard Cobert's drum cues, which were played during the dream sequence, unless it's just the first time I noticed them. Magda beckoning Quentin against his will in that dream had me thinking of Angelique's dastardly dream curse. 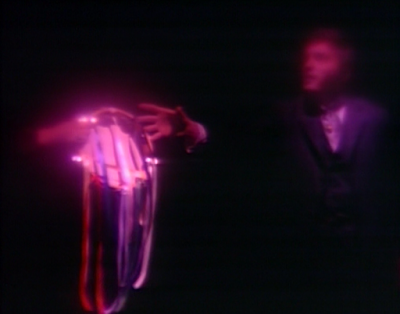 John: And I thought there might be an issue when Quentin forgot to tell Magda and Sandor to beat it. But all bets were off when Magda threw his cash back in his face!

Christine: They may decide to blow town anyway to avoid the repercussions of their work. I couldn't help thinking that Magda was essentially giving Quentin the finger when she pretended to remove the curse from him. 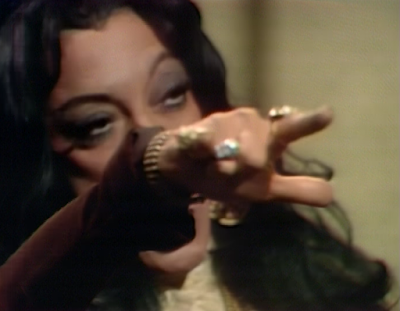