Sitting down around the table at a seance, Quentin calls upon Brutus' spirit. Melanie moans, and says, "Lottery now or all will die. Plague. Die. PLAGUE! DIE! PLAGUE! DIE!" Quentin asks what she means, and asks about the black plague. She speaks of the smell of bodies burning. She says one must go in the locked room. She adds that he was cruel; that he killed. Quentin asks why the spirit demands a sacrifice. She says she can tell them no more, and says they must go to the locked room. She collapses, and when she wakes, she asks if she had an attack. He says that he thinks she was the same woman when she had the attacks. Melanie asks if they found out why the family was cursed. He says they didn't, but they got a clue about a plague. He says the disease is in the house because at one time, the family didn't go along with the legend of the locked room. He says it's possible a sea-faring man from the orient came along at the right moment. He says they can check the family history and village archives. He says the woman possessing Melanie may be the woman who cursed the family. Quentin says he's going to the village to find out what he can. There's a knock at the door, and Melanie goes to answer it. She comes back and says it's the police there to question them about Stella's murder. Flora goes to the door and invites them in. 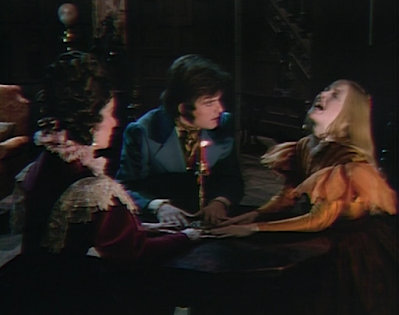 Morgan kisses Catherine and tells her that he has a secret. The secret is that he's happy. She says she needs to unpack. 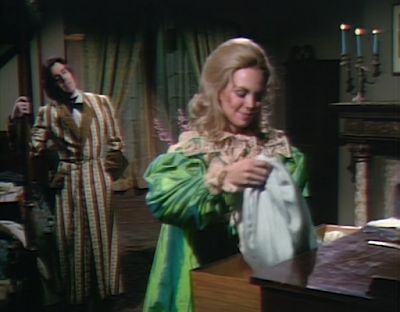 Catherine asks him to start a family as soon as they can. He bristles. He tells her that it's out of the question. They will never have children, and they won't discuss it because of the curse. She's shocked that he lets the room dictate his life. She says he's married the wrong woman if he thinks she'll give in to superstition. He calls her a fool. She tells him that they must have children, and he tells her never to mention that again, and storms out. 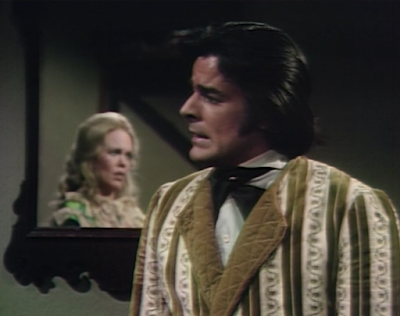 Melanie tells her mother and Quentin that she's sure they know she killed Stella. Quentin tells her that it's just her imagination. Melanie says they knew they were lying. Flora says they can blame Stella's brother for that. Melanie corrects, her, saying that they can only blame themselves, because they were lying. Quentin tells her that the police believed everything they told them. He asks who could deny the word of a Collins. Melanie goes upstairs and Flora tells Quentin that Melanie was right. 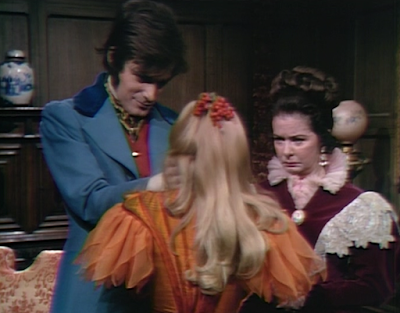 Catherine removes some letters from her luggage. She opens and reads one. It's a love letter from Bramwell, explaining that he will return to her a success. Melanie comes into her room to say goodnight. She asks if Catherine is afraid when she comes into her room. She notices that Catherine has been crying. She tells Melanie that she's never learned to control her moods. Melanie says they each have a secret they must live with, and Catherine agrees. 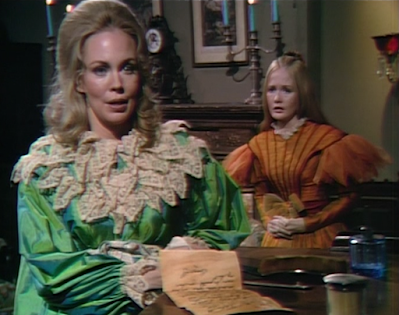 Quentin reads from the family history about their ancestor's dental work. He tells Morgan if any of the Collins' had the plague, he'll find it. Morgan berates him for holding a seance when Quentin finds a reference to the plague at Collinwood. He says it started in the house at 1680. It starts with a fever and then black marks arrive. He also says it ended as quickly as it started. Morgan tells him to put down the book. He says it's more important than the plague. He says he wants Bramwell and his mother out of the old house. Quentin says his father made that agreement, and it will stand. 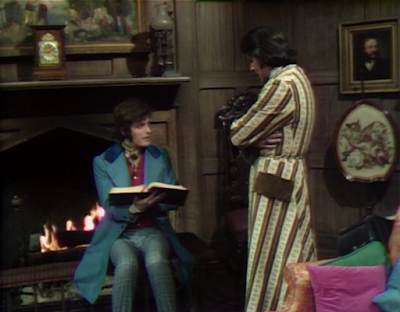 Melanie tells Catherine that she will be good for everyone in the house, and then bids her goodnight. Catherine is still unpacking when Morgan comes in. She says a wife is not supposed to argue with her husband; just accept. She says she never learned how to do that, and he says she will. She says she's not so sure, and he tells her she'll have to try. He finds a letter from Bramwell on the mantle and freaks out. He reads it, and she tells him it was written years ago. He accuses her of still being in love with Bramwell. She reminds him that she married him. He tells her to give him the letters, and then searches her suitcase for them. He takes them to the fireplace and throws them in, saying she will never read them again — EVER! She asks if he'll forbid her of thinking of them. She asks if she's allowed to have a past? Or are only the Collins' allowed that. He comes to her and embraces her, begging her to love him as much as he loves her. 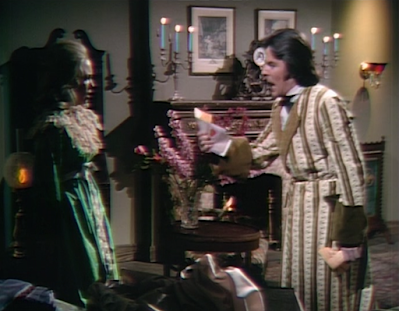 Melanie dreams. She sees her mother wondering what they did to deserve punishment. She sees Quentin holding Melanie's dead body. Flora tells him that he must take her body to the village to be burned, because she has the plague. Melanie wakes up screaming. Quentin rushes into her room and asks her what's wrong. She says she's burning, and he realizes she has a fever. He tells his mother to leave, saying the plague has come back. 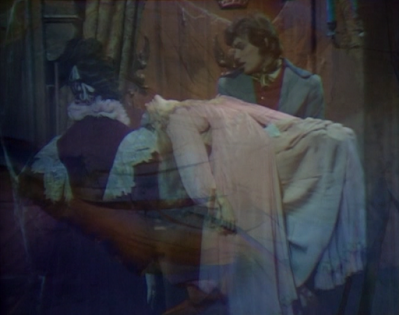 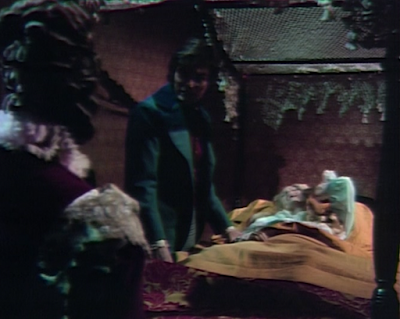 John: I guess we technically have to include the seance tracker again. Did you notice in the voiceover intro that Catherine says that the curse started in 1860 (which was still another 19 years in the future at this point)? We'll write that off as blooper, but with the curse starting in 1680, a good 100 years before the main house was built (at least in our time), someone still has some explaining to do. And I don't think the answer is that the house existed in parallel time first, and was then built up around the room in 'our' time, 100 years later...
Christine: The writers needed to consult the Collins Family history books before writing this curse into the storyline, but perhaps they think that parallel time gives them the freedom to play fast and loose with established history.
John: Would you let your part-time possessed/potentially murderous relative answer the door? Especially when there's a good chance that it's the police coming to visit? Interesting how they managed to handle a police visit without police on the call sheet for today's episode. 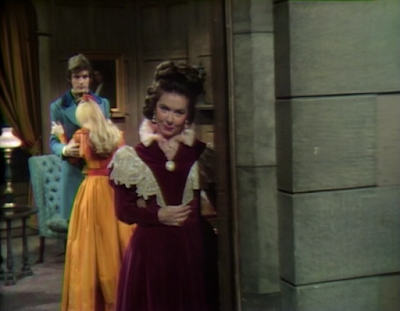 Christine: Now that Melanie has the plague, perhaps they'll finally hold that Lottery they've been putting off.
John: Please tell me Catherine regrets marrying Morgan. He's a jealous, controlling jerk. Not since Angelique was with Sky Rumson have we seen such a dysfunctional relationship.
Christine: There was also Maggie and Quentin Collins in parallel time. I certainly regret Catherine marrying Morgan, though I have to wonder if his refusal to give her children is a precursor to her finding out that her recent tryst with Bramwell may have given her what she wants.
Dark Shadows Before I Die Séance Tracker
Episode 170/171: Dr. Peter Guthrie conducts; Carolyn, Vicki, Roger, Laura Collins participate; Josette speaks through Vicki in French; held in the drawing room at Collinwood